A Near Disaster: When Non-Dairy Doesn't Mean Non-Dairy

I love Meijer.  I feel like I need to start by saying that, before I get down to the meat of this post.

After living in California and Florida and now in Michigan and having driven back and forth across the country several times during those moves, we've gotten to test out quite a few different grocery chains and Meijer is my favorite.  After all, what other store has Sandy the horse (along with just about every other thing that we could possibly want or need), who the kids can ride for a penny.

Sandy makes Meijer a favorite for two out of the three kids that are old enough to sit up in our family (I've convinced Mae to pet Sandy, but she refuses to go for a ride): 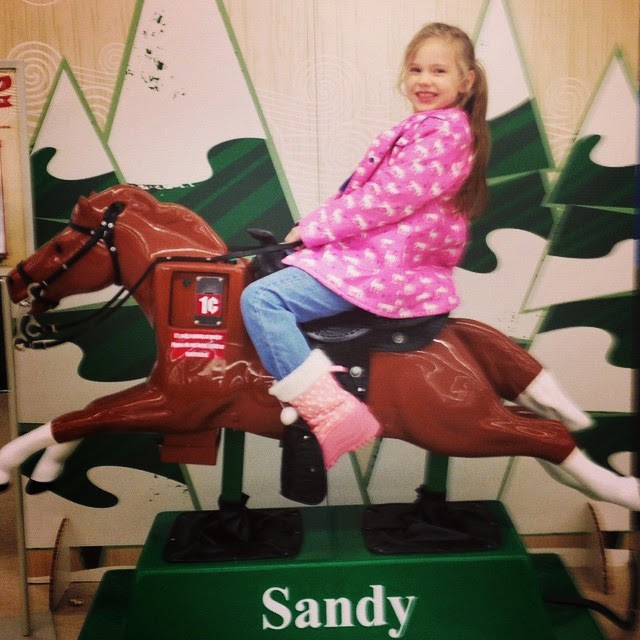 I had to start with that before I go on to make my next point.

I'm writing this post because when I was starting out as a parent of with kids with newly diagnosed food allergies I had no idea how tricky identifying allergens could be... and our trip to Meijer this week, where I made a major error by trusting a misleading label, is a perfect example of how mistakes can happen.

Our newest little guy, who is five weeks old today, is miserable for days if I eat dairy, so it looks like he's set to follow in his big brother's footsteps.

As you can probably guess, I spend a lot of time reading food labels.  And when I go shopping I often have a six year old who follows me around and says "Does that have wheat in it?  Are you sure?" Every single time I pick something up off the shelf, because she's old enough to understand how sick wheat makes her and she's hyper vigilant about every single thing that passes her lips because she doesn't want to feel like that ever again.

Earlier in the week when I was shopping I was in a hurry.  Paul had all three kids in one of those nifty shopping carts with enough seats for three kids and my goal was to make it through the store before anyone started screaming.  I had James strapped to my chest and we were making our way through the store as fast as we could, when I spotted this: 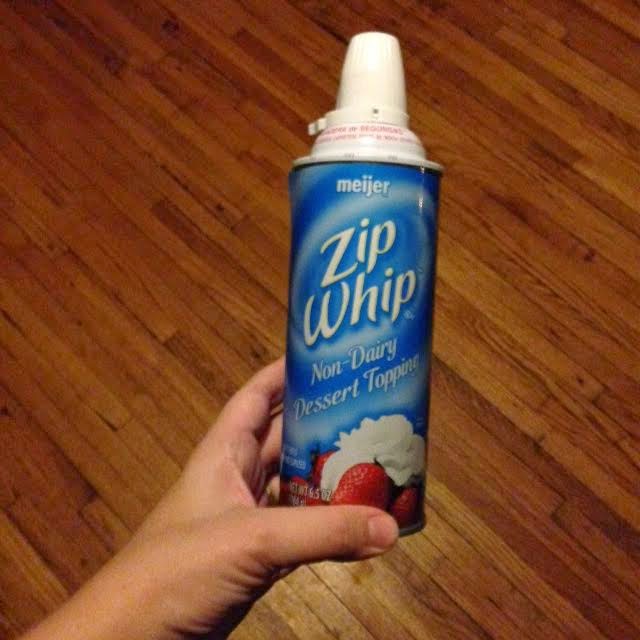 I'll admit I thought "Hmmmm... I wonder what's in that?  Petroleum by-product perhaps?"  and then "I wonder if it tastes like the real thing?" and finally "It'll be a special treat!  I mean there are so many things that we can't have..."

With Thanksgiving coming we could even have it on the pumpkin pie!

In the early morning hours, James was miserable.  He spent the next day looking at me like this (when he wasn't crying and throwing up): 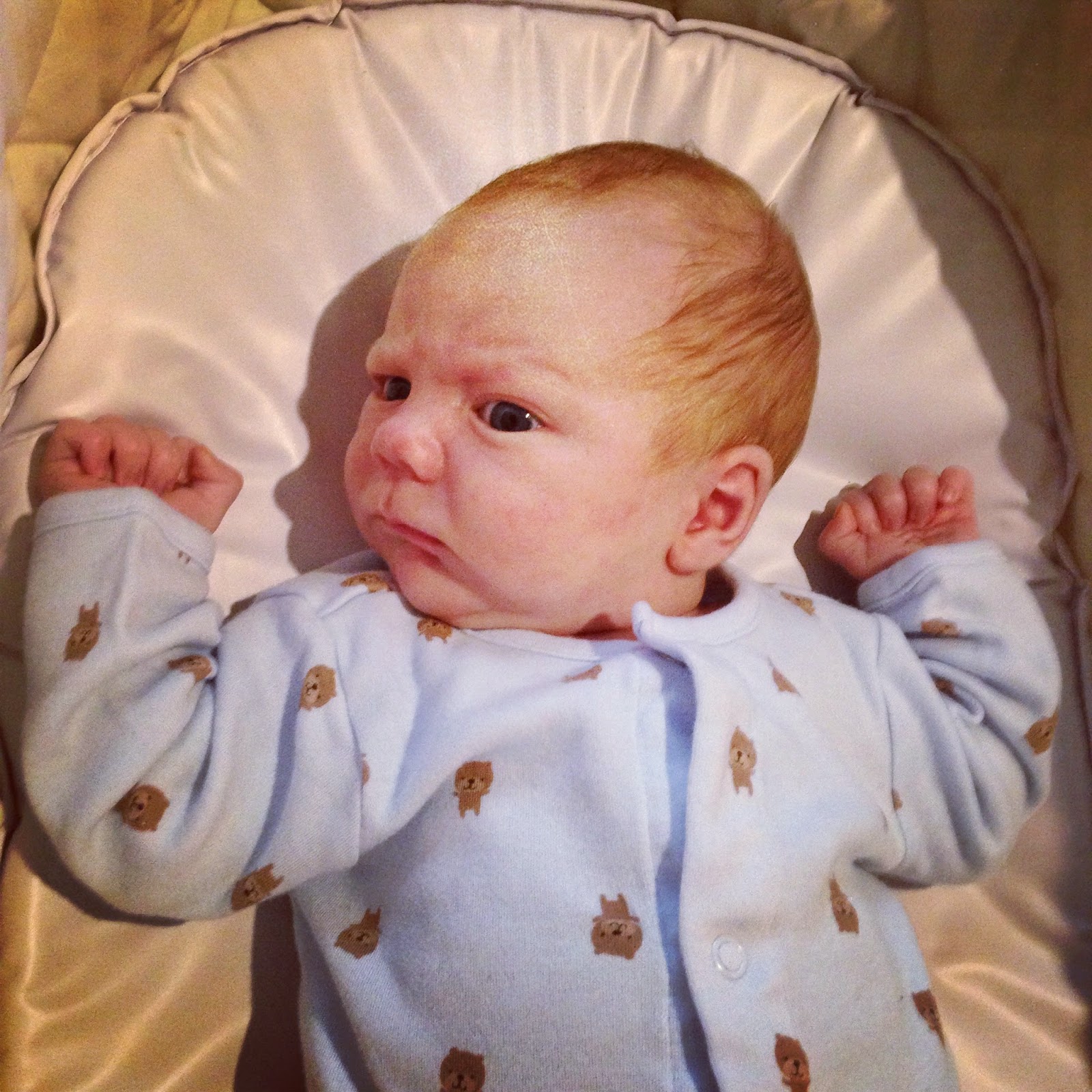 I didn't think much of it.  He's been fussy for weeks.  Maybe the dairy wasn't totally out of my system yet.  It was a possibility.  And within a couple of days he was feeling much, much better.

A few days later I made gluten free dairy free waffles for the kids.  I had blueberries in the refrigerator... and the thought of whipped cream topped blueberry covered waffles sounded really, really delicious.  I went to the refrigerator and grabbed the "non-dairy dessert topping" and was about to add it to the waffles when I thought of Sadie saying "does that have wheat in it" every time I pick something up in the grocery store.

The bottle said dairy free but was it gluten free?  I couldn't imagine whipped cream having gluten but still, it was best to check.  I didn't want the girls to get sick.

I turned to bottle over in my hand and was shocked by what I saw: 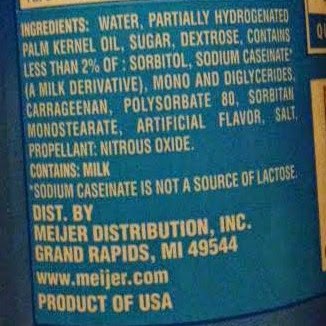 Below it an explanation was provided.  "Sodium Caseinate is not a source of lactose."


"Milk allergy should not be confused with lactose intolerance. A food allergy is an overreaction of the immune system to a specific food protein. When the food protein is ingested, in can trigger an allergic reaction that may include a range of symptoms from mild symptoms (rashes, hives, itching, swelling, etc.) to severe symptoms (trouble breathing, wheezing, loss of consciousness, etc.). A food allergy can be potentially fatal."  Source

Sodium Caseinate is casein.  It's the thing that I have spent the last year avoiding at all costs for Mae.  The idea of it in her system makes me feel like hyperventilating.

I had taken Non-Dairy to mean that the product didn't contain Dairy not that it didn't contain lactose.  A much more accurate (and less dangerous) label would have been to label it lactose free like all those other products that contain dairy but don't contain lactose for people who are lactose intolerant.
I'm taking this as an important reminder.  Labels aren't always accurate.  As a parent of a kid with food allergies I have to be vigilant and look past the front label and then hope that I catch everything on the back label so that I don't end up with a sick kid, or worse yet, end up needing that epi-pen (and frighteningly, there are even worse case scenarios because allergies can be fatal).

And I hope that Meijer takes steps to change the label to make it less confusing.  With that big "Non-Dairy" label on the front of the product there are people out there who are bound to think that it's actually free of dairy... and with a serious food allergy making that mistake could be fatal.
Posted by Cammie Diane at 10:12 PM