Yesterday's Terrifying Moment... where I beg you to attach your furniture to your walls... 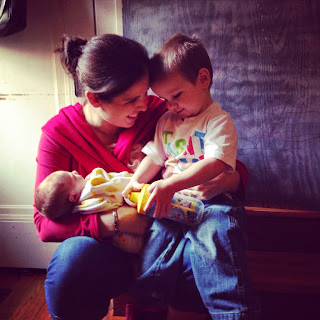 A few weeks before James was born I was frantically rearranging the furniture.  I stacked our stackable cube bookshelves until they reached just below the ceiling and struggled to bolt them to the brick walls in our house, succeeding after hours of work.  I had Paul haul a dresser up from the basement to put Patch's clothes in and moved the babies clothes into another dresser in the boys room.  And I rushed around trying to do all the things on my to do list that I thought needed to be done before the new baby arrived.

One of those things was attach the dressers in the boys' room the walls.  I mentioned it to Paul a couple of times, along with a list of about a dozen other things that needed to be done right-this-second, always while we were in the middle of doing something else and away from the house, but at the time I didn't push him to do it, or even remind him, and I didn't track down the brackets I'd bought to do the job that had been swallowed by the thread and fabric that accumulate on my sewing table minutes after I've cleared it.

The thing was, Patch was still in his crib at that point.  He didn't try to get out of it... and perhaps more importantly he didn't spend any time in his room outside of his crib. 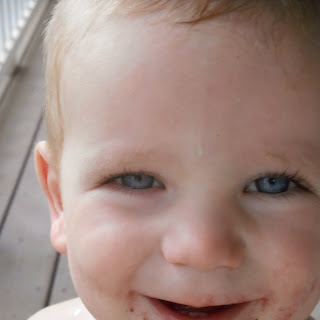 The boys' room is one of the smallest rooms in the house.  There is hardly any room for toys.  The furniture dominates the room.  I'm not sure Patch's feet had ever touched the ground in his room before his new pirate bed arrived.

And then he was given the pirate ship bed for his birthday... and suddenly he was free of his crib.  But by then I had forgotten my to do list in all the hustle and bustle of having a new baby.  I didn't even think of it when Paul was in the room assembling the bed, which would have been the perfect time to get the job done.  A few days ago Patch emptied the top drawer onto his bed and over a couple of nap times moved the clothes from one side of the room to the other and for a moment I thought, "Oh, I need to have Paul bolt that to the wall." but by the time Paul got done with his job search for the day I'd forgotten and it was bedtime and then the kids were all tucked into their beds and I wasn't about to suggest he go barging in to wake Patch to drill holes in his wall.  I'd remind him the next day, I thought, promptly forgetting.

Yesterday we all received a jolting reminder of how important that little task that kept slipping my mind was. 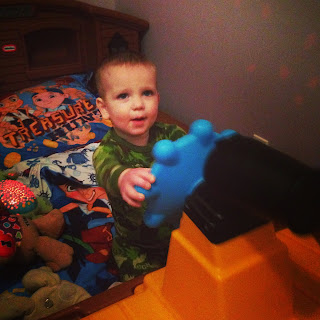 Paul had put Patch down for his nap and Patch was furious.  He'd just learned how to open the door to go out into the hallway and Paul had gone down to the basement and found one of the door knob covers that Mae hadn't broken, and had taken it back up to his room and put it on his door, explaining to Patch that we were just trying to keep him safe.  The bedrooms in our house are all upstairs and the staircase is steep with floors that can be slippery for little pajama covered feet and we were worried that he would open the door and run out into the hall and fall down those same stairs.

Patch yelled in outrage when the door closed.  He's at the age where he still needs naps.  He's grumpy without them and napless days are usually filled with tears and whining... but he doesn't like going down for his nap because he's certain he's missing out on the fun going on downstairs.

So he yelled to go downstairs for a few minutes after Paul left.  Paul was going to the gym before starting up his job search for the afternoon and I was downstairs starting the school day with Sadie, while Mae was working with one of her therapists in the school room.  I heard the yelling turn into crying and knew that if I peeked my head in the crying would turn into a full blown tantrum.  Crying meant our tired boy would likely be asleep in a couple of minutes.  I don't let babies cry it out but a few minutes of tears for a fussy older kid who needs a nap happens now and then and usually leads to a well rested, smiling kid appearing an hour or two later.

When the crying didn't stop after about ten minutes I went upstairs, expecting to find an angry Patch banging on the door.  But he wasn't.  The moment I opened the door I saw his red dresser toppled over on top of him.  James was strapped to my chest in his wrap, but I still managed to lift the dresser, struggling because he'd been standing in the bottom drawer when it fell and it had snapped closed on his little legs, which were then trapped inside.

Finally freeing him (it took all of five seconds, but felt much longer), I scooped him up on my hip as he screamed, tears streaming down his face, and ran downstairs.  I told Mae's therapist what happened and she stood with him and comforted him while I raced for my phone, scooping him back up and calling Paul.  His phone went to voice mail.  I tried the gym.  He wasn't there yet.  When the guy at the front desk heard what had happened he promised to tell Paul the moment he walked in.

I called his doctor's office.  By then he'd stopped crying and was laying quietly against my chest, breathing steadily... but I was still worried.  Did he have a head injury?  Internal damage?  Were his legs okay after being slammed shut in the drawer?

His office put me through to a nurse who said to take him straight to the ER to have him checked out.  Paul called back.  He was on his way home.  The guy at the desk had told him what happened.

Patch continued to lay against my chest while we waited.  Paul got home and we met him at the door.  He scooped Patch up and took him straight to the ER.  I put out a prayer request to a few groups of ladies I know and then sat down to wait for news and try to do school with Sadie, who kept asking if Patch was okay. 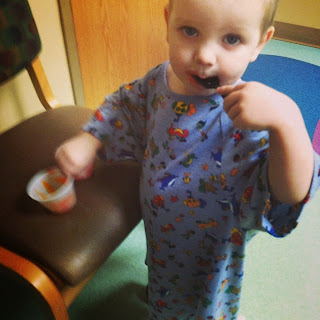 An hour later Paul called and told me that he was pretty certain Patch was okay.  They were still in the waiting room but Patch was feeling well enough to get up and dance around the ER.  The next call told me he was eating jello in the pediatric ER and then he sent a picture of Patch in a hospital gown, before the news came that he'd been given a clean bill of health and was being sent home.

I let out a sigh of relief and hugged my big boy when he got home.  And then we went to the store and got new safety gear and Paul came home and fastened that dresser to the wall so that it couldn't move a millimeter.

I am so thankful that he is okay... and will never again put off fastening a piece of furniture to the wall for another day.  It could have been so, so much worse.

And I'm now going to be one of those people that beg you to attach your furniture to the wall... even if your child isn't a climber (Patch isn't) and even if the piece of furniture seems like it will stay put... there's always a chance that if they pull out all the drawers and yank on it with there low to the ground little center of gravity that it will move in a way you didn't expect... and I would spare you that frightening image I saw yesterday, that I think will likely always be imprinted on my mind, when I opened the door and saw Patch pinned under his dresser.
Posted by Cammie Diane at 7:24 AM

Email ThisBlogThis!Share to TwitterShare to FacebookShare to Pinterest
Labels: safety