Six Weeks: On Siblings and Frowns 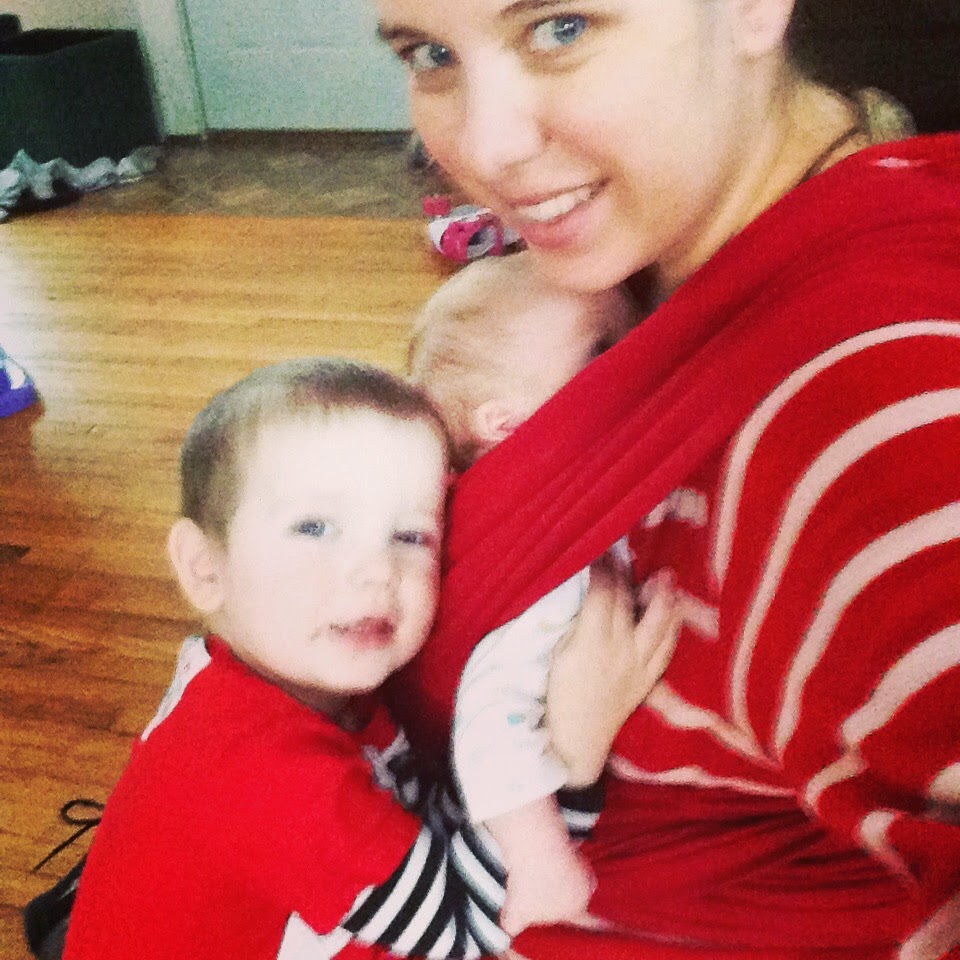 I have to admit, when I was pregnant with James, I was a little worried about Patch's reaction to his little brother's arrival.  With Sadie and Mae the adjustment to adding new babies had always gone smoothly and I knew that they would both be over the moon about a new baby, but Patch, I worried, might be a different story.

He was the most possessive of Mommy Time and Mommy Cuddles and while I was sure we would still have our special Patch and Mommy time together I wondered what his reaction would be to a tiny newborn who would spend much of the first months of his life in the wrap strapped to my chest.

Today James is six weeks old and it seems that I need not have worried.

When I bring James into the living room in the morning I feel like I'm introducing a pop star to his fan club.  There's scrambling for the best seat.  Patch usually gets there first, repeating "Buddy! Huggies!" while trying to lift James out of my arms and kiss his face.  While I remind him to be gentle he'll carefully examine James' tiny fingers, touch his cheeks, all the while repeating the nickname that he's come up with over and over again.  An excited chorus of "Buddy!  Buddy!  Buddy!" echoes through our days. 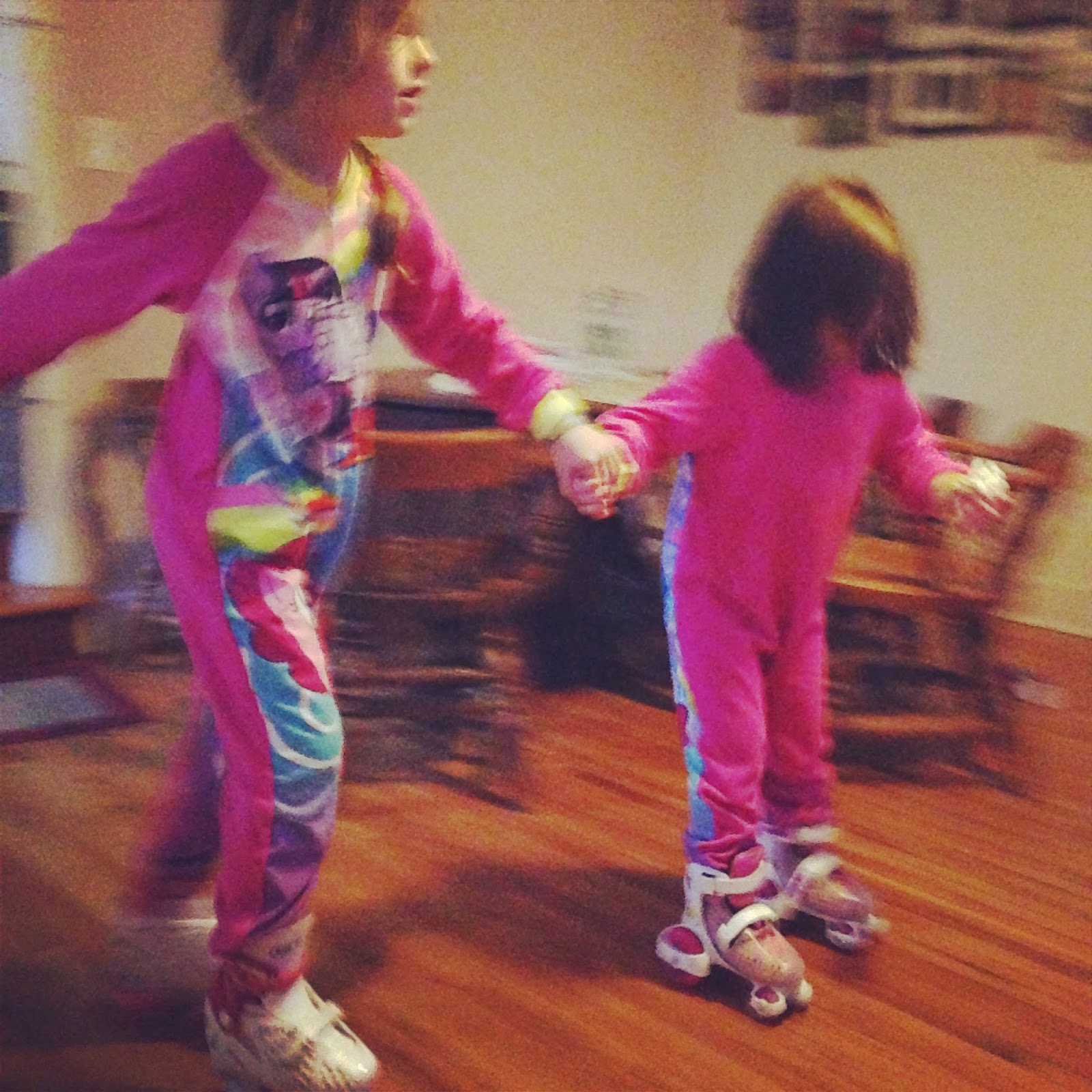 Once James' cheeks have been kissed a dozen or so times, Patch usually goes back to playing.  And then it's Mae's turn.  She'll quickly fill in the space left by her brother and stare at James' tiny face with a huge smile.  She'll touch his cheek and look at me, waiting for me to say cheek.  She'll point to his nose and do the same thing.  She loves for me to label whatever it is she's pointing to, whether it's a doll or her brother's tiny mouth, and we repeat the routine every morning and most afternoons.  She'll gaze at him and say "love, love, love" in a quiet voice.  And just like her brother she'll give him several kisses during each visit before going back to playing.

Yesterday as we were getting the kids out of the car after a trip to the grocery store James let out a scream.  Mae was about to get out of the other side of the van, but she stopped and raced over to look at his face and touch his cheek before reluctantly turning and going back over to where Paul was waiting for her.  He was fine.  She just needed to make sure.

As we expected, Sadie has done well too.  She's the only one big enough (and responsible enough) to hold him on her own and if she hasn't been given a chance in a few days to take advantage of this big sister right, she'll let me know.  And at night after we've cleaned up the house and when Patch and Mae are safely in their beds I'll put him on the floor for tummy time and she'll lay down next to him, with her face close to his for moral support.  He's not a huge fan of tummy time, but it's not so bad when his big sister does it with him.

While Patch calls him "Buddy" and Mae calls him "Ames!!!" in her sweet little sing song chirp, Sadie is trying out "Iggy," "Grumpasaurus" and "Grumpy Cat" on her youngest sibling, who occasionally graces us with a smile, but still seems to spend a good deal of time trying to figure out how he got to this loud, bright world and regarding everything around him with a fair measure of suspicion: 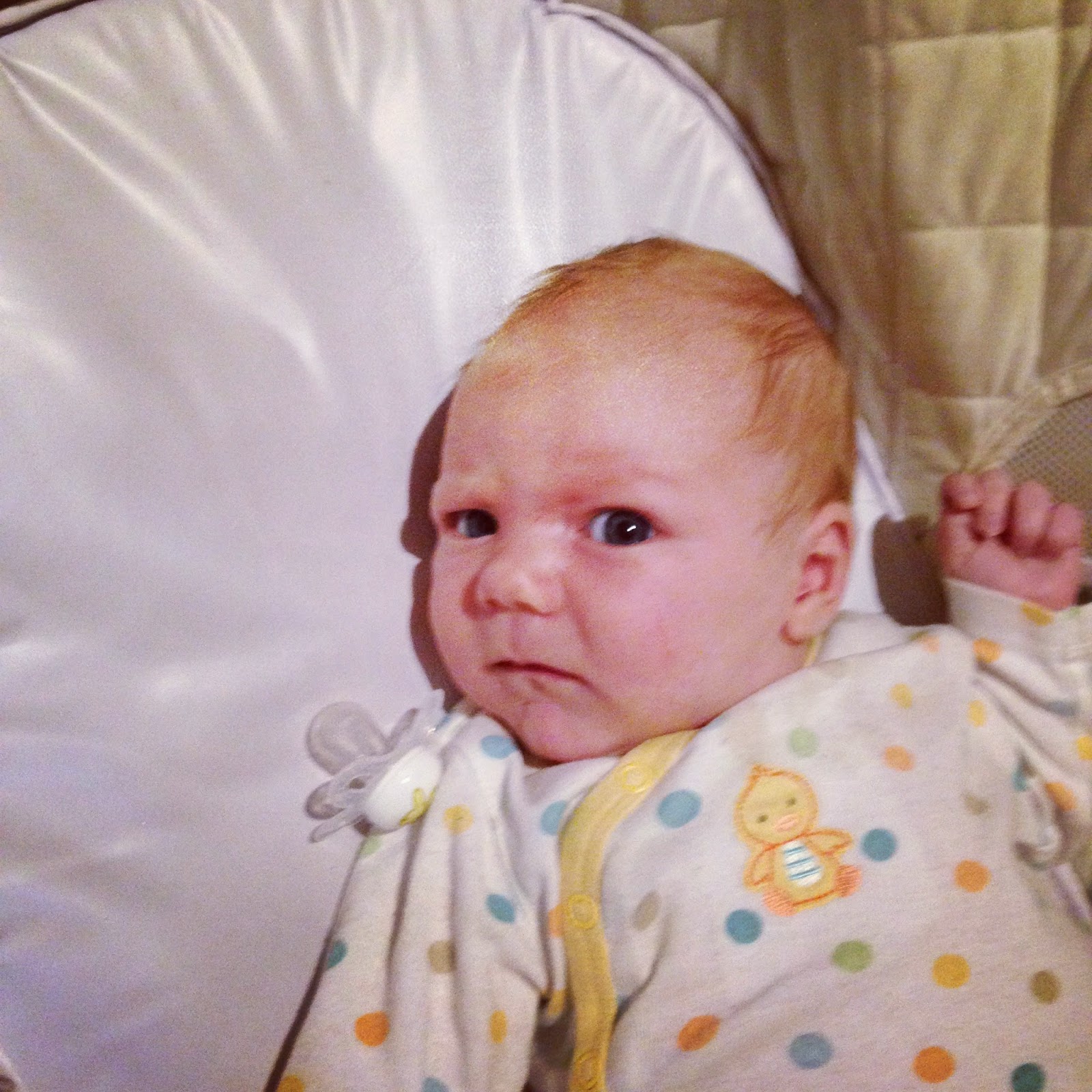 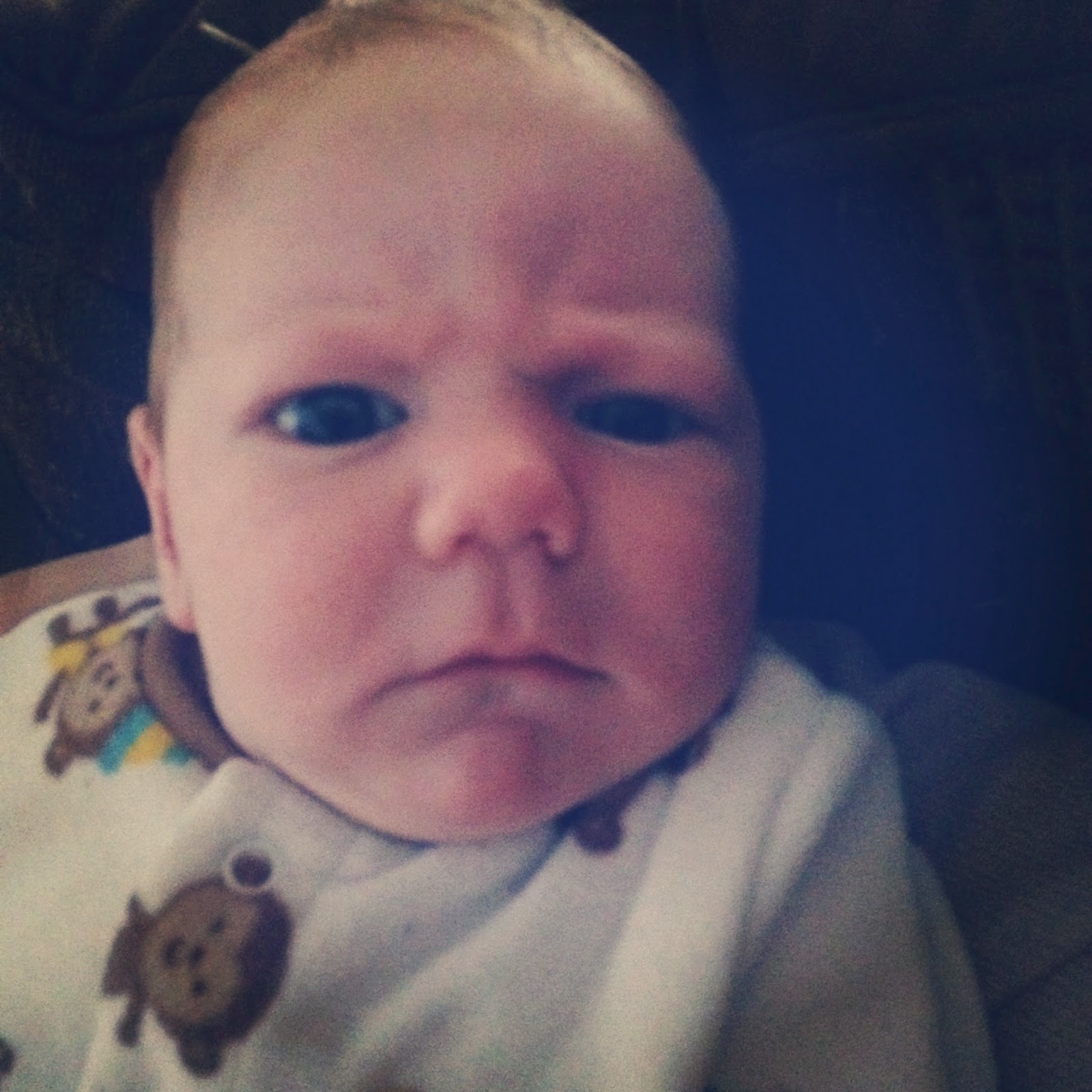 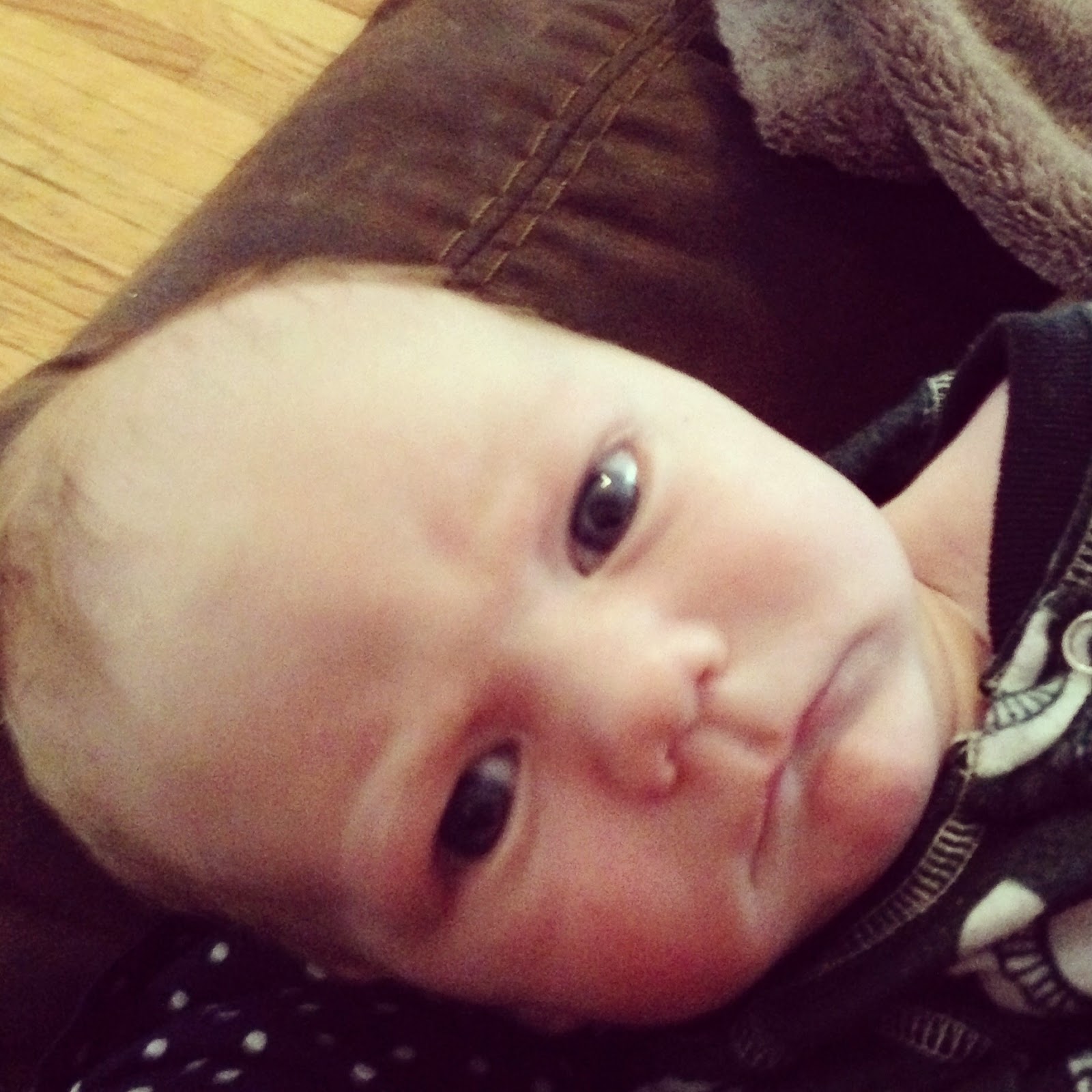 And of course a few of my favorite smiles... Daddy still gets the vast majority of the smiles but once in a while he'll throw on my way too! 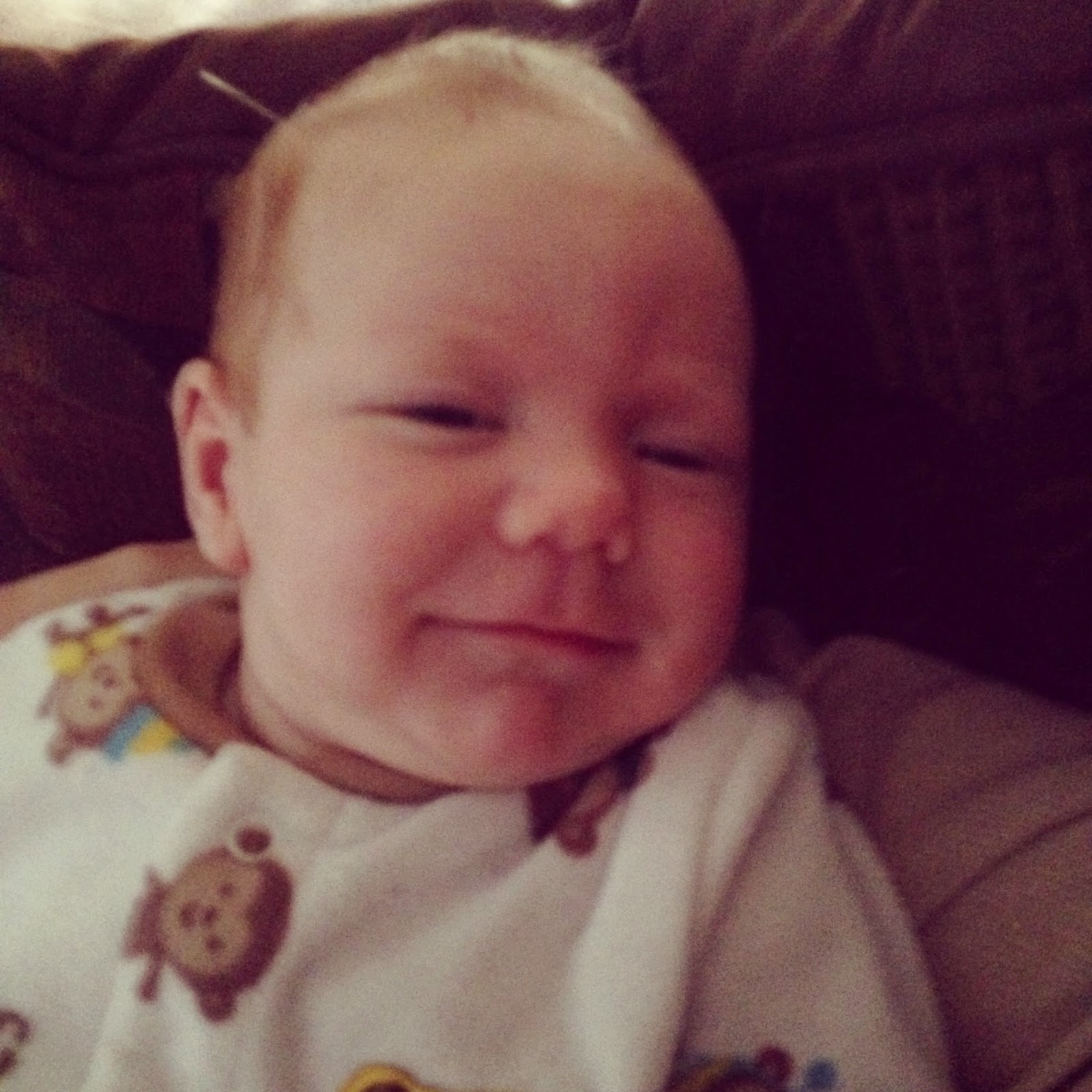 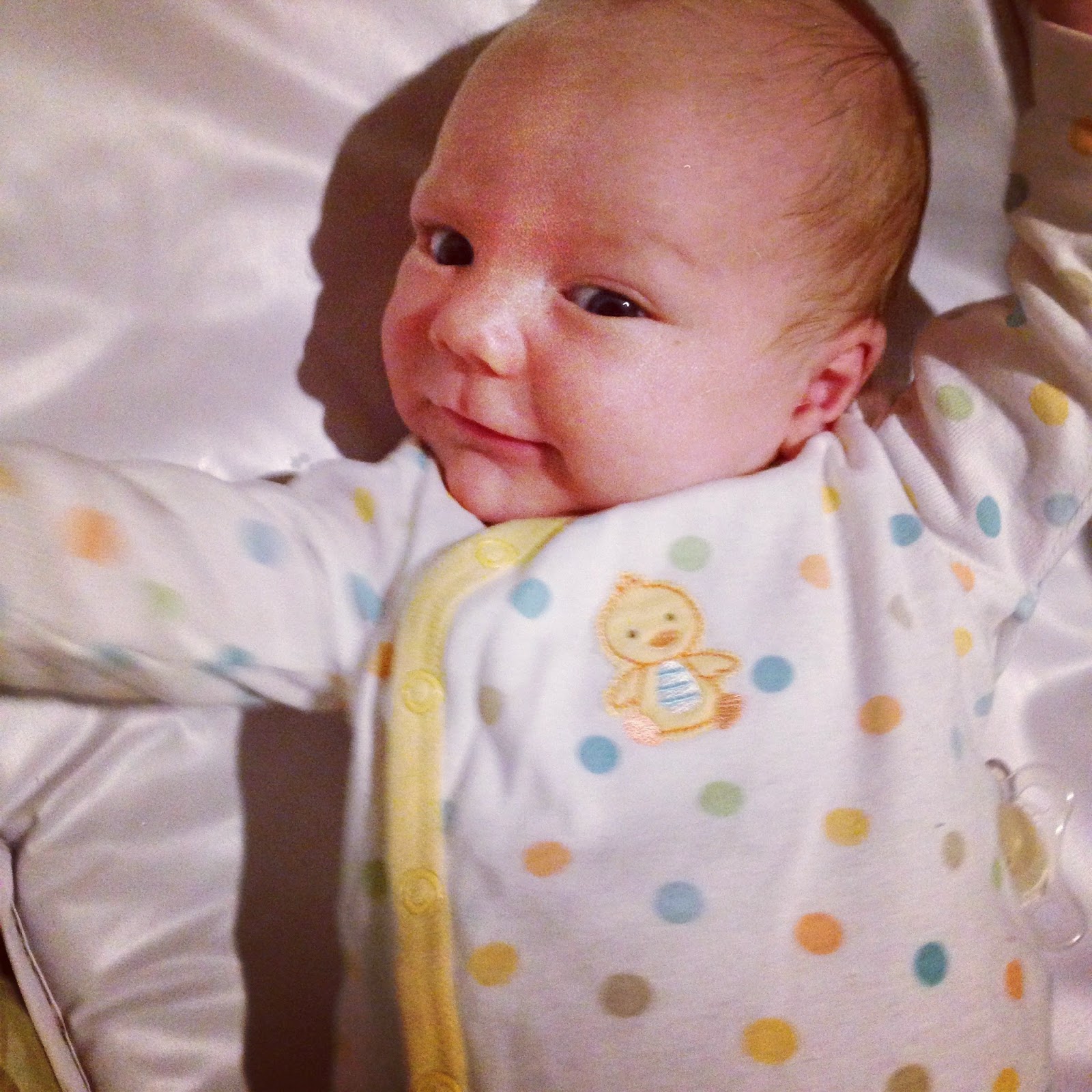 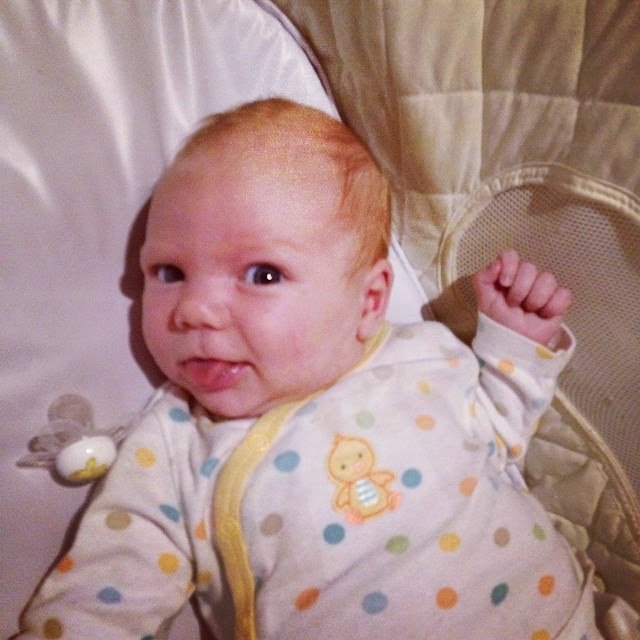 Happy six week birthday James!  Time has flown since you joined us and I can't believe that you're outgrowing your three month sleepers already!
Posted by Cammie Diane at 8:34 AM