How could I have forgotten to post pictures of Patch's birthday?

I think the credit (blame?) would have to go to a certain four week old (today!) who doesn't believe in sleeping outside of Mommy or Daddy's arms.  James doesn't seem quite as laid back as Maggie or Patch (so far) and is promising to be refluxy like Sadie and so I've had my hands a bit fuller these last few days than I did with the last two newborns.  And so if the blog is a little quieter or my grammar looks like sleep deprivation is taking it's toll... you'll know why!

The funny thing is that I find myself minding it far less this time around.  With Sadie it seemed like the sleepless nights would go on forever.  This time I can't help but feel like the infant days end all too quickly... which probably makes me really odd... but I'm really fond of the early newborn days (probably because the last two were such easy going newborns).

But that's not what this post is about.  This post is about Patch's birthday.  I'll have to apologize in advance for the photo quality. Our house doesn't have the greatest lighting now that the days are dark and cloudy and while the girls birthdays involved lots of outdoor things, Patch's birthday was blustery and rainy, which had me wracking my brain for things to do.

The day started when Patch woke up and yelled to go downstairs.  From his room I could hear his little voice.... "Paul... go down stairs!!!!  Wake up!  Up.  Downstairs!  Go!  Downstairs." or something along those lines.  I glanced at my phone.  It was 5:30 am.

So we went downstairs where Patch was greeted by a table of presents, mostly wrapped in Christmas paper, because the night before I realized I had girly paper in stock, but that my selection of non-princess paper was rather unimpressive: 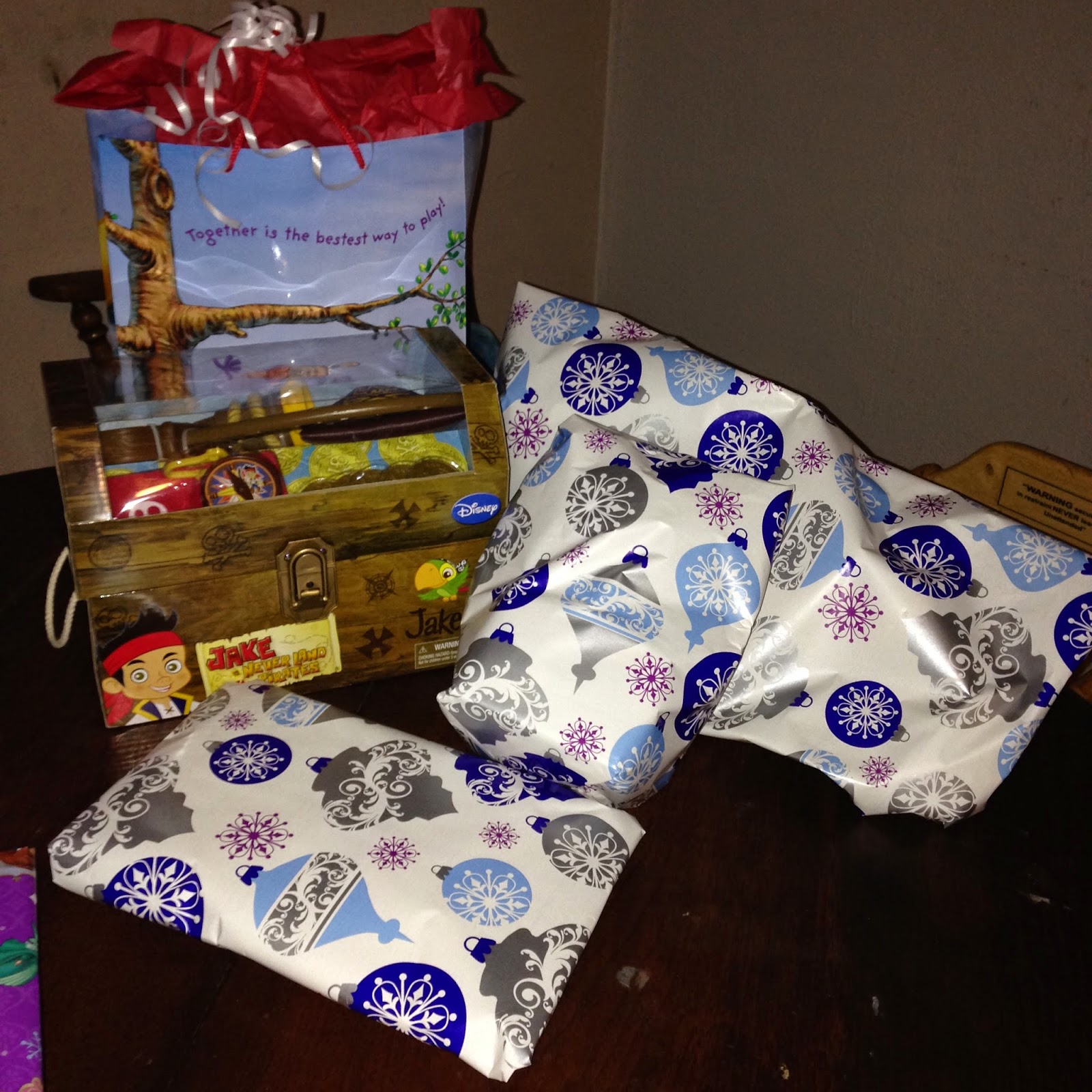 Paul and I had gotten Patch a Patriots jacket (from Thred Up), a shark toy that he'd fallen in love with at a toy store a while back, a Jake and the Never Land Pirates play set and a Team Umizoomi Geo doll that sang the "Umi Shake" song that Patch loves so much. 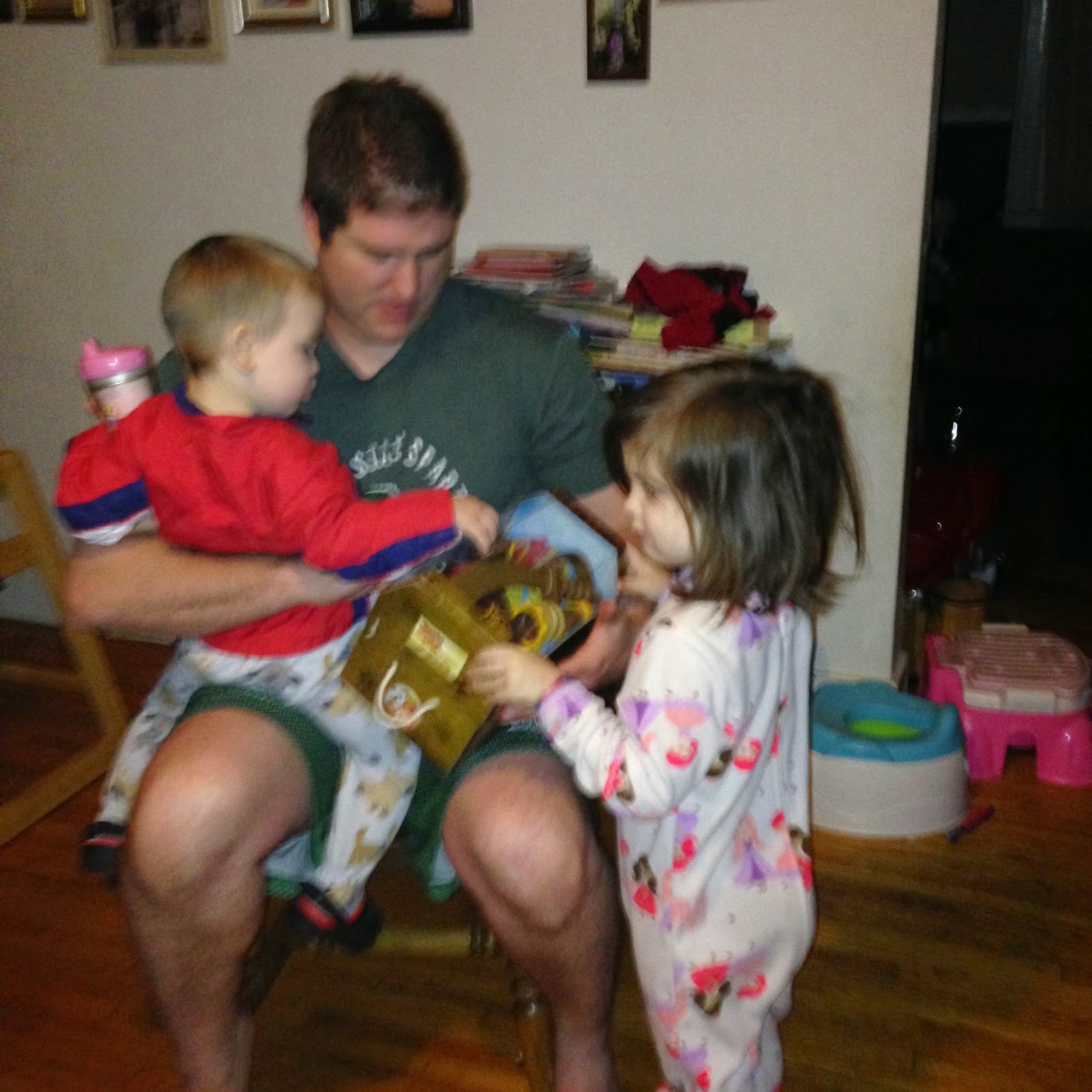 The big hit of the morning with Patch was the pirate play set.  And the jacket.  He instantly demanded the jacket be put on so that he could wear it over his sleeper and then carried the compass and spy glass around the house. 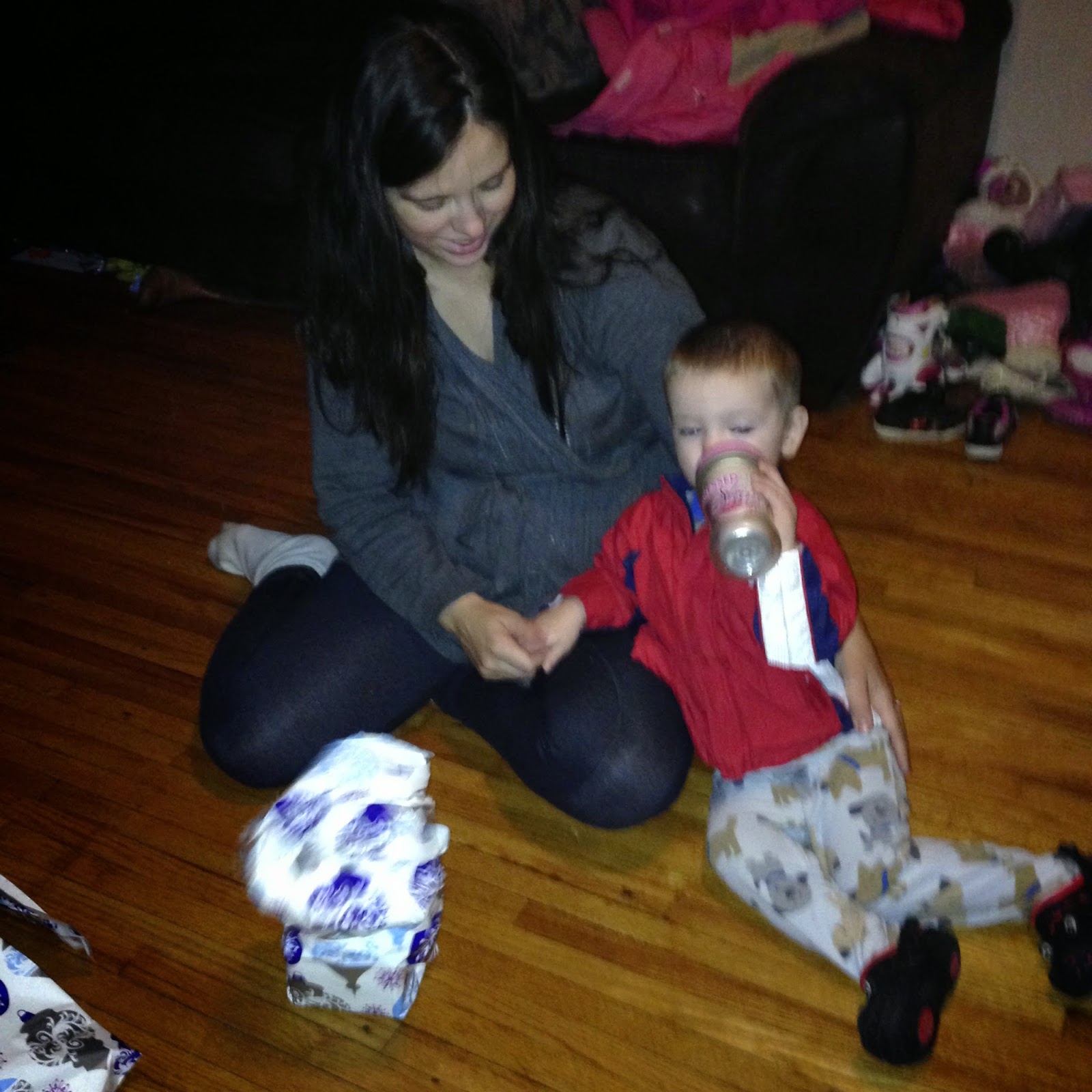 He wasn't all that interested in opening his presents... Mae on the other hand was extremely excited by what was going on and was more than willing to help out. 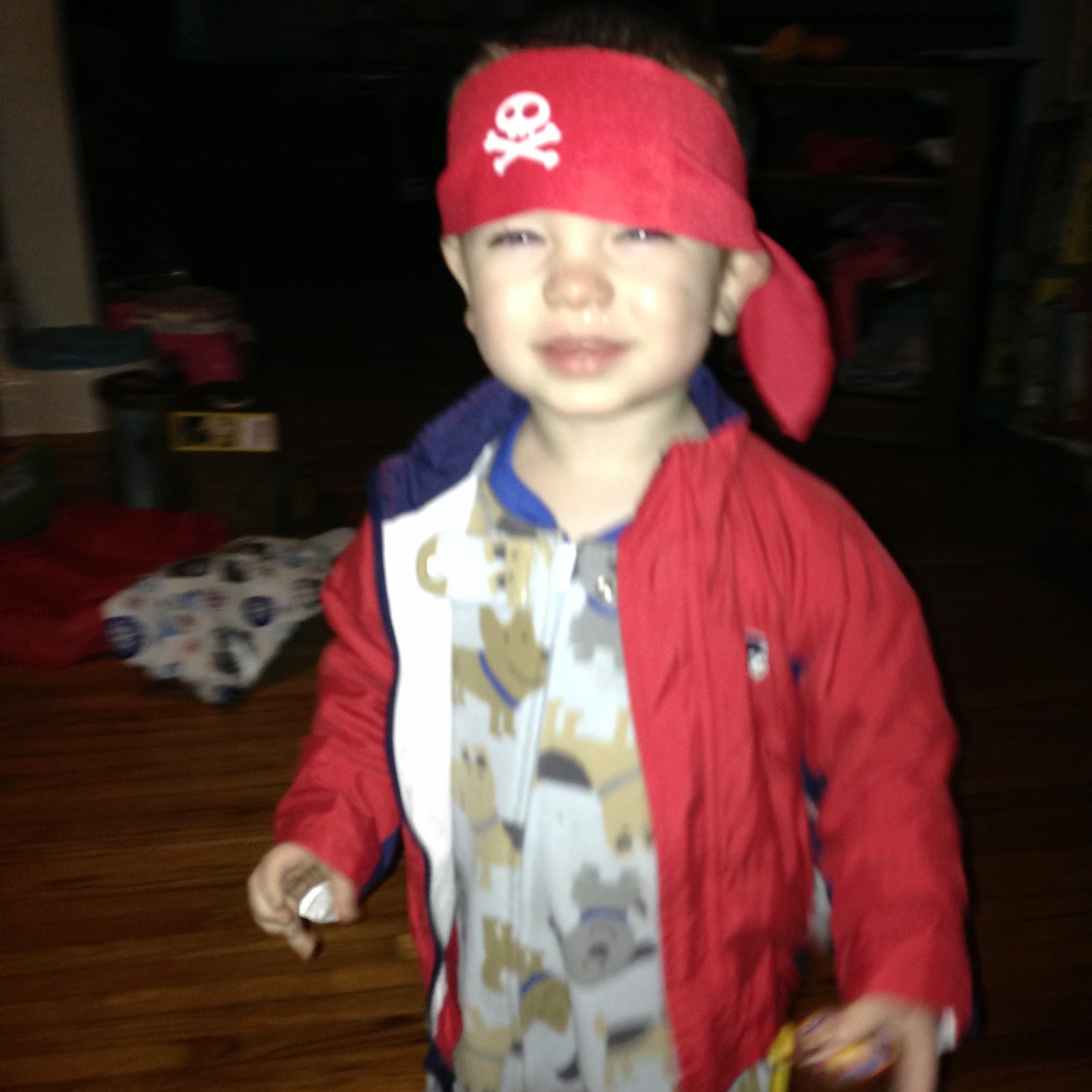 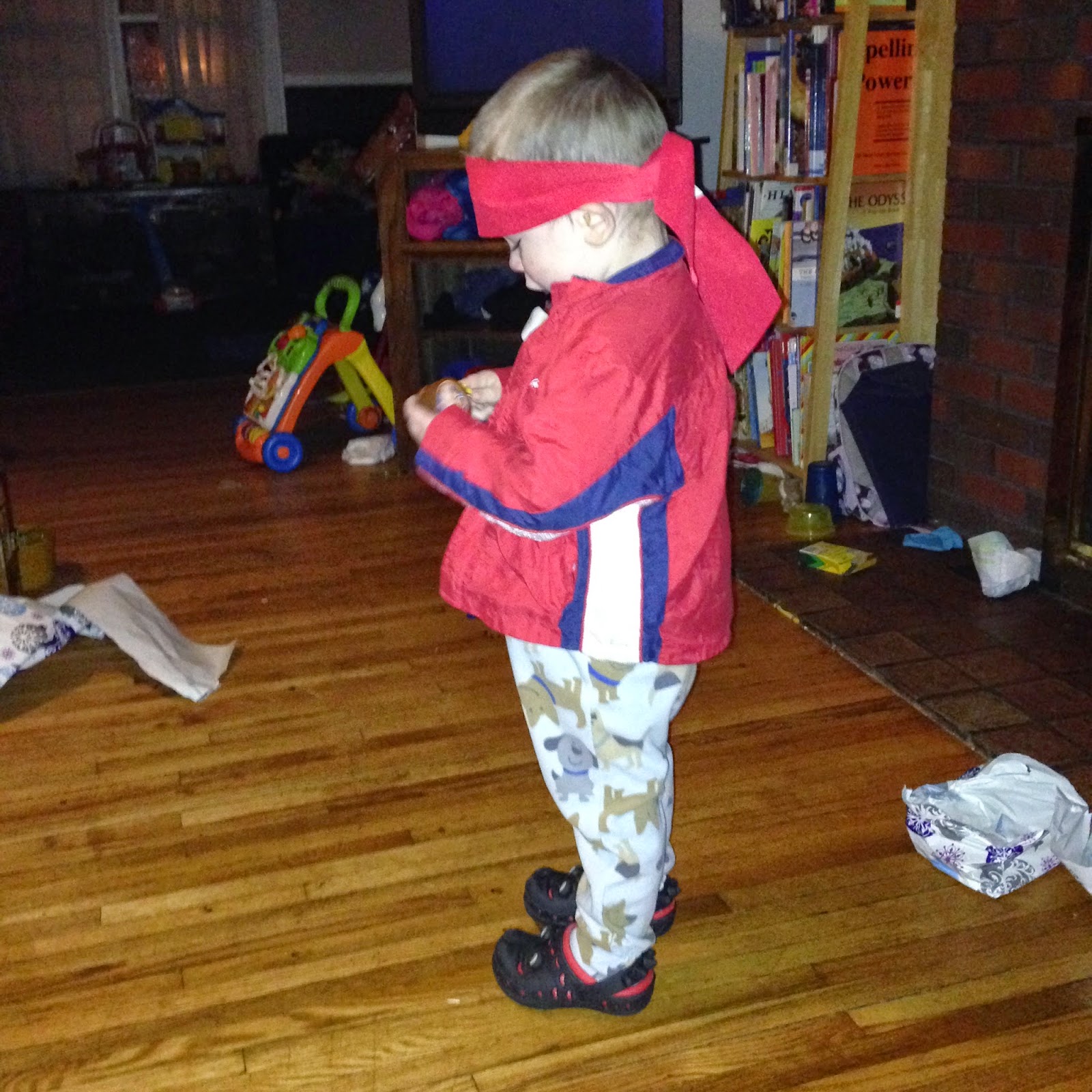 Mae was also a huge fan of the Umizoomi doll and spent the day running around with it playing the song over and over and over again(Patch was terrified of it for the first day and finally warmed up to it yesterday). 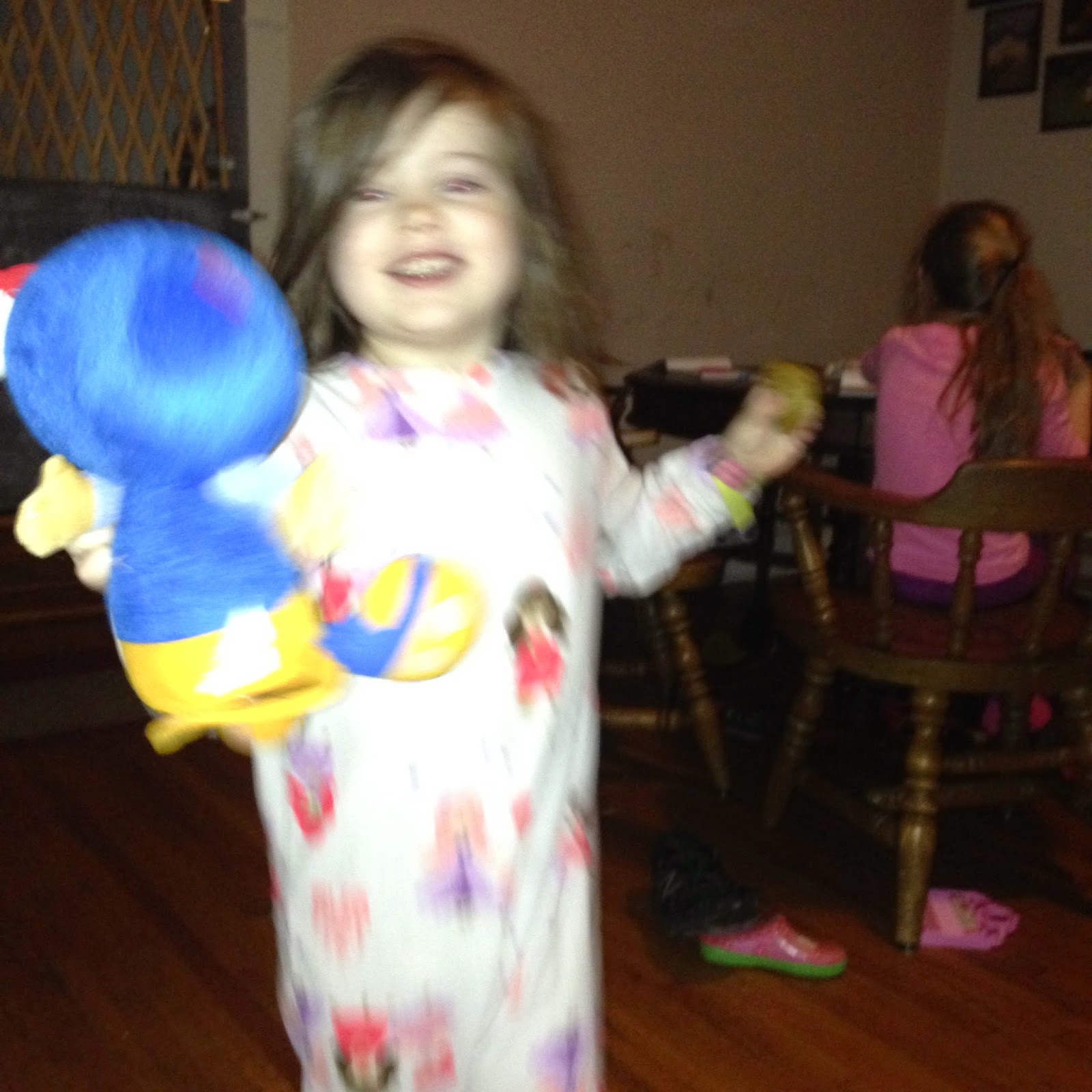 As usual, James wasn't impressed by anything going on and continued to survey his sibling with suspicion... 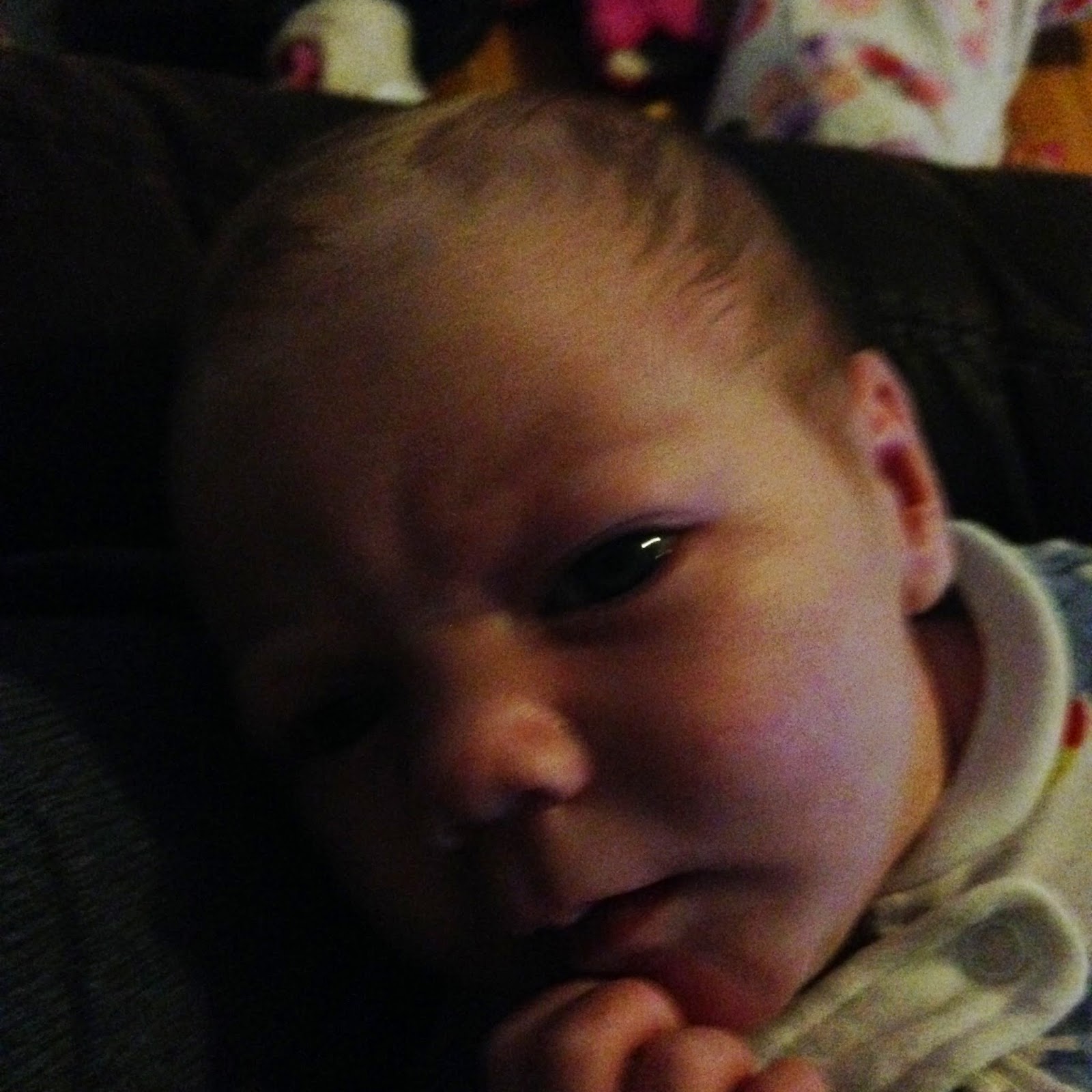 We had doughnuts that I'd made out of the leftover g.f. cake mix for breakfast and then Paul went back to sleep since he'd had a late, late night at work, while the kids and I played downstairs.  At 10 Paul took Patch to his Daddy and Me swim lesson class (not what it's really called, but it's how I think of it) and then after a lunch that included cupcakes we tried to think of something fun to do.

The zoo is our normal birthday tradition, but the rain was coming down, which put a damper on that plan.  During a break in the rain we started to head to the zoo, but then another onslaught began and so we turned around and went to the mall... so that the kids could ride around in the little rental car shopping carts.  Patch is a big fan of those carts and with the Christmas decorations going up, the idea was a big success with the two to six year old crowd. 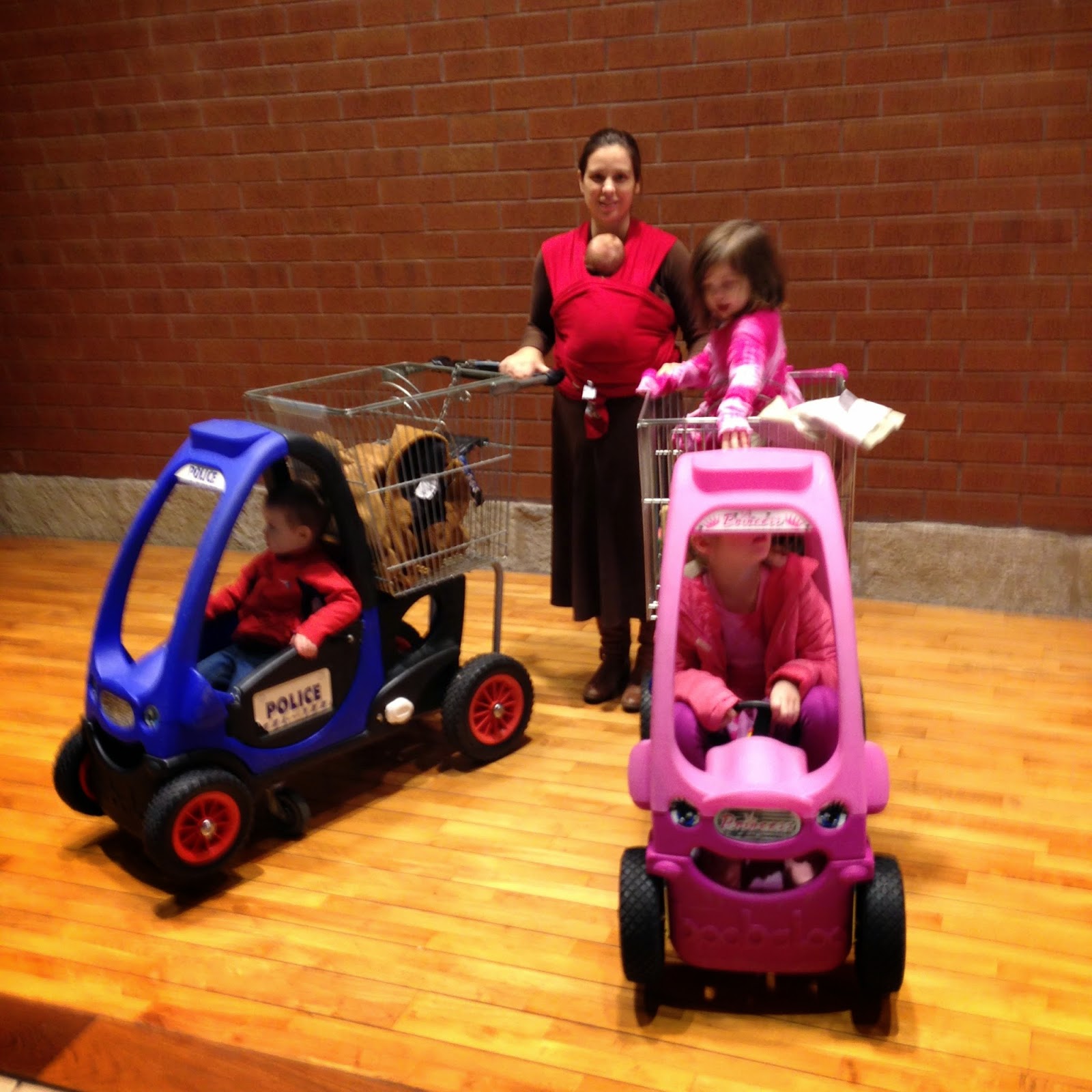 After that we headed home for pizza and cake.  Th cake followed the days pirate theme (although it's hard to see the shark gummies covering the cake against the blue background): 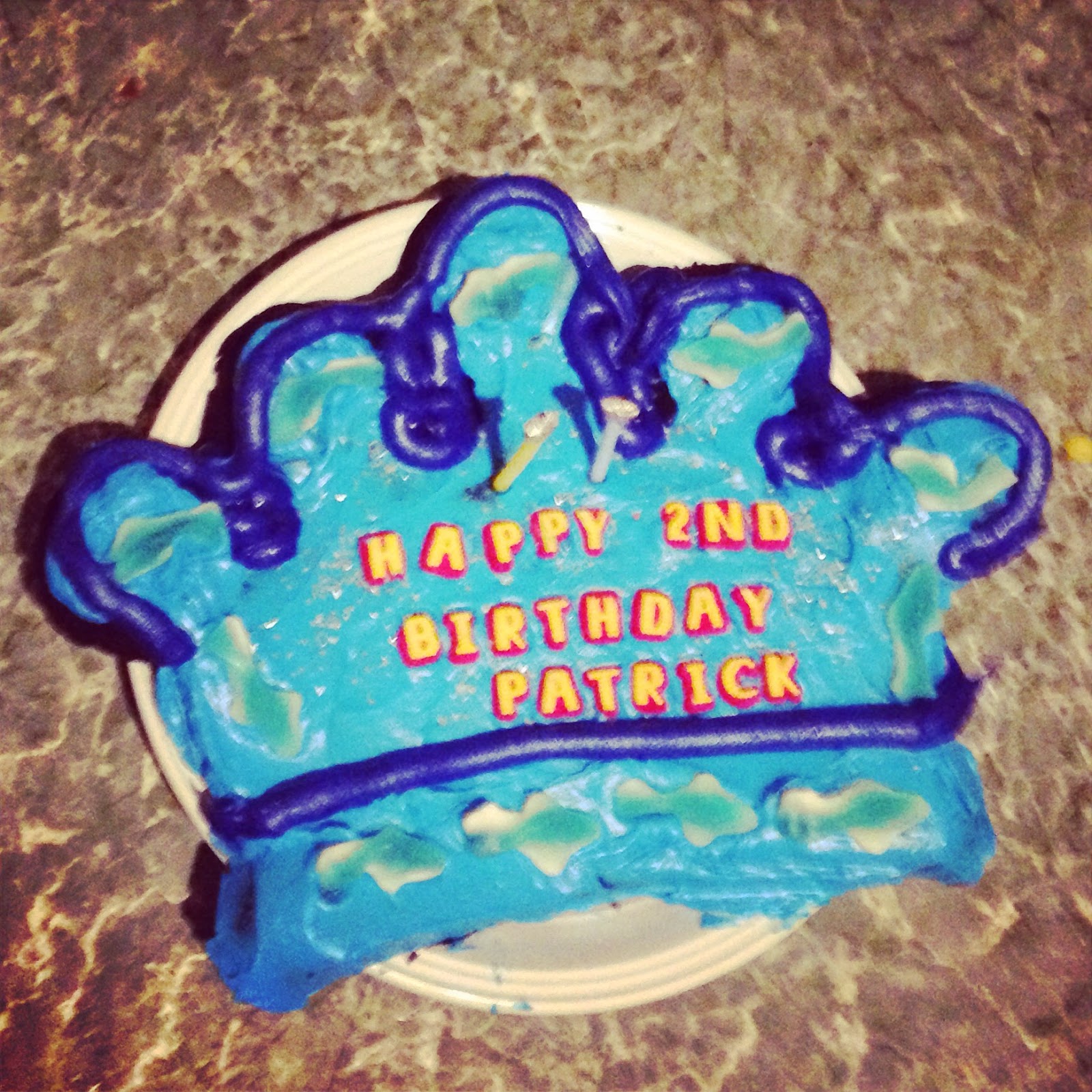 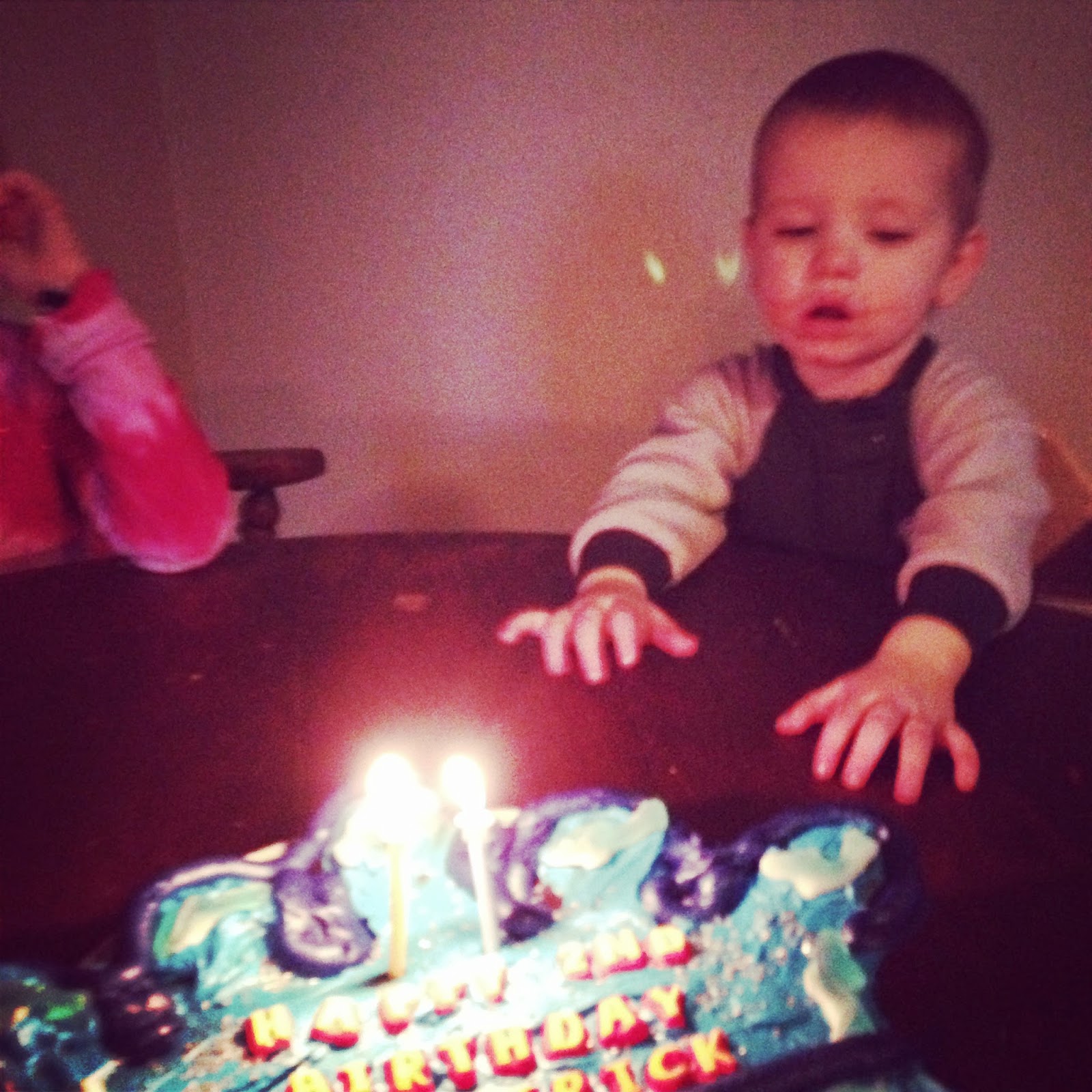 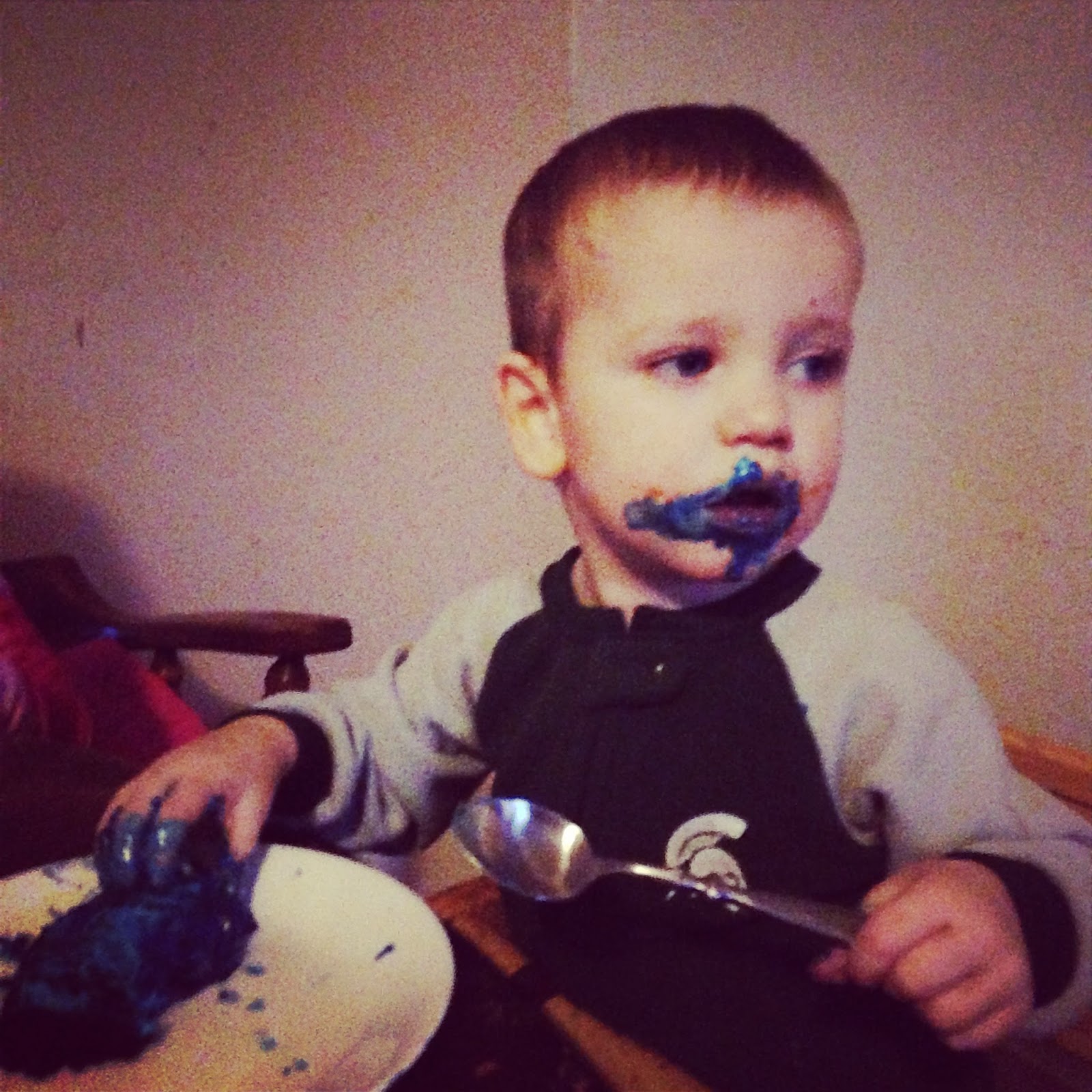 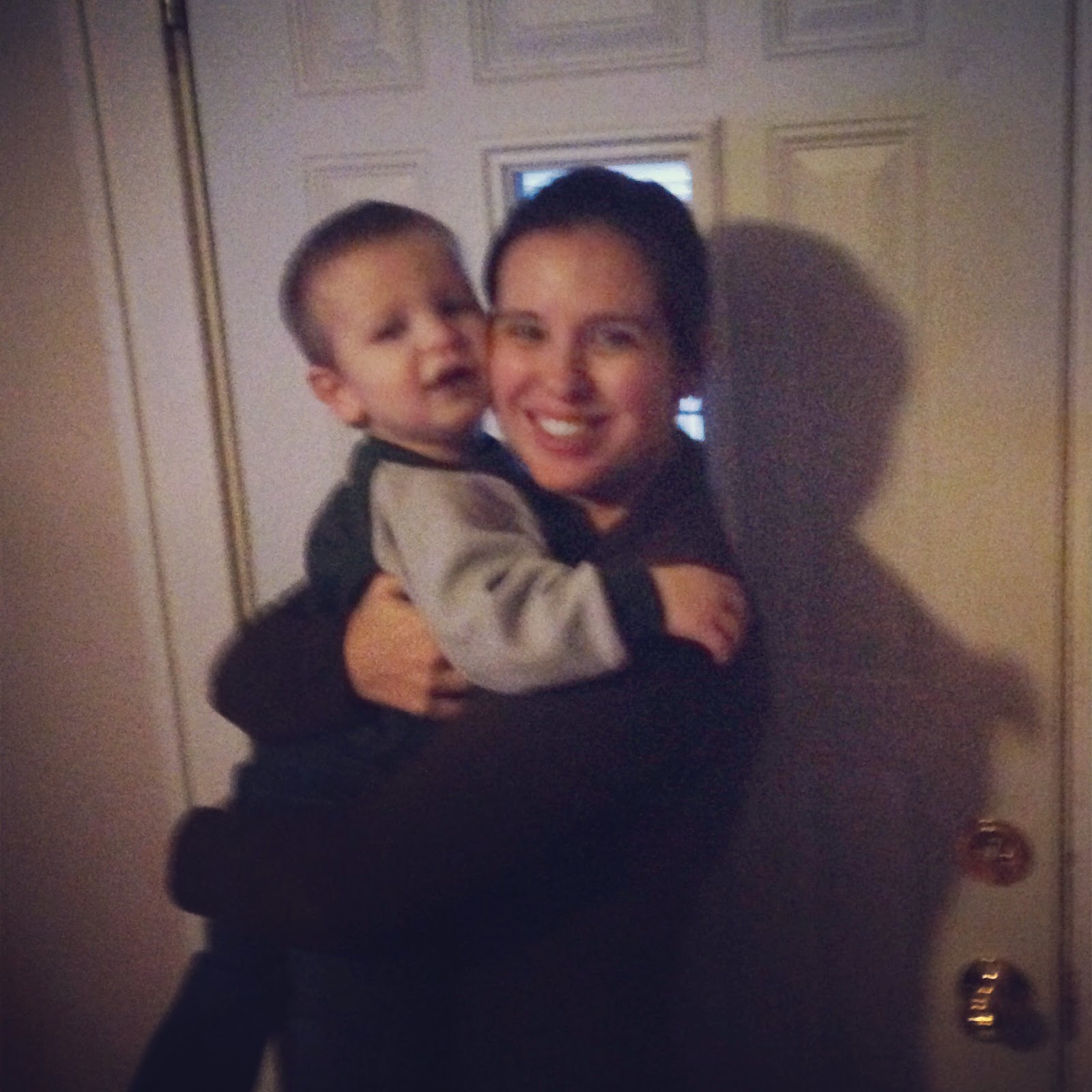 And finally, after consuming more cake than he'd ever had in his entire life, it was time for bed...

And that was how Patch spent his second birthday!