This is one of my favorite pictures of my grandpa and because today is Veteran's Day (and my mom uploaded it online so I have it here with me in Michigan now) I thought I'd share it: 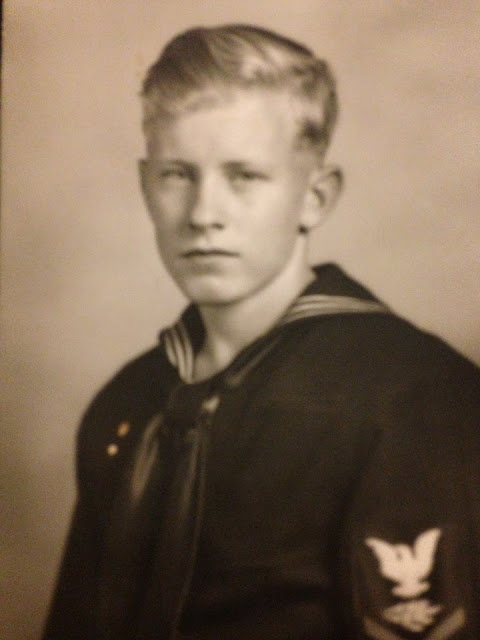 The story that I grew up hearing related by family members, although I seldom remember my grandfather telling it himself, was posted by one of my aunt's on Facebook at the end of October on the anniversary of the sinking of his Destroyer:


Today is the anniversary of the sinking of my Dad's WW2 ship DE -404, Eversole. They had just rescued downed pilots and taken on many injured men from the Destroyers, when it was sunk.

He was a Radio Man and on duty very early in the morning when it was hit by 2 torpedoes from a Japanese sub. He said if he was not on duty he would have been killed as many (40) of his bunk mates went down with the ship and are still with it. The radio flew up in the air so he was not able to get a distress call out.

He was able to get a life preserver on as the ship sunk jumped into the water. Shortly after, the sailors in the water saw a boat and flashed their flashlights at if hoping for rescue, but it was the Japanese sub who had surfaced to shoot any survivors with machine gun fire, the flashlights were easy targets and my Dad put his out really quick after realizing it was not a rescue boat.

The there was a big explosion underwater, probably depth charges from their own sinking boat that killed or wounded the survivors in the water. My Dad had internal injuries from the blast and shrapnel wounds. (He has eight belly buttons now)

They waited in 80 degree water 4 hours until morning when the other ships realized they were not answering calls. He says he was never so cold, but the cold water may have kept his internal injuries from bleeding out. One of their destroyers rescued them while the other went after the sub and sunk it.

He received a purple heart and a silver star. We are very proud of him and glad he survived!

Happy Veteran's Day and thank you to all the men and women who have served our country!
Posted by Cammie Diane at 7:59 AM