Before I realized that there are no Quick Takes this month I wrote my seven this week, so.... here we go.

Which is both entirely my doing and also slightly embarrassing.  You see, if you have a non-personal Facebook page for long enough and ignore the regular Facebook "sponsored posts" (basically "this could be your ad") for long enough they will (or may? I'm not really sure how it's decided) give you a $10 coupon code so that you can see how super cool it is to have a boosted post.

It usually comes in the form of "Hey we're giving you $10 to boost this post" and I'm like "Nope.  No way.  Why one earth would I want to boost that? I am not boosting an update on being sick. You literally cannot pay (for) me to boost it. I barely wrote it and posted it on Facebook."

But they asked again on the "Finding Me" post and I thought "why not?"

So I clicked to accept the coupon and set the limit at the amount of the coupon (half expecting the advertisement to somehow try to sneak beyond the limit, although it worked exactly as it was intended last time) and submitted it.  Almost immediately it came back as accepted and gradually began to tell me I was getting "paid views."

And almost immediately I was uncomfortable.  I mean, I knew what was going to happen.  I know what a sponsored post is.  Facebook had given me a coupon once before, but it hadn't really bothered me when I had my Etsy shops up and going.  Sponsoring the shop was no big deal.

But sponsoring my writing feels... kind of strange.

I mean, don't get me wrong.  Facebook's algorithms can make it pretty hard to get posts out to readers, even when they do follow pages, so if I am lucky enough to get another one of those coupons I won't hesitate to use it.

And I'll probably feel awkward about it every time Facebook gives me a cheerful little update about views until it expires in that imaginary future, too. 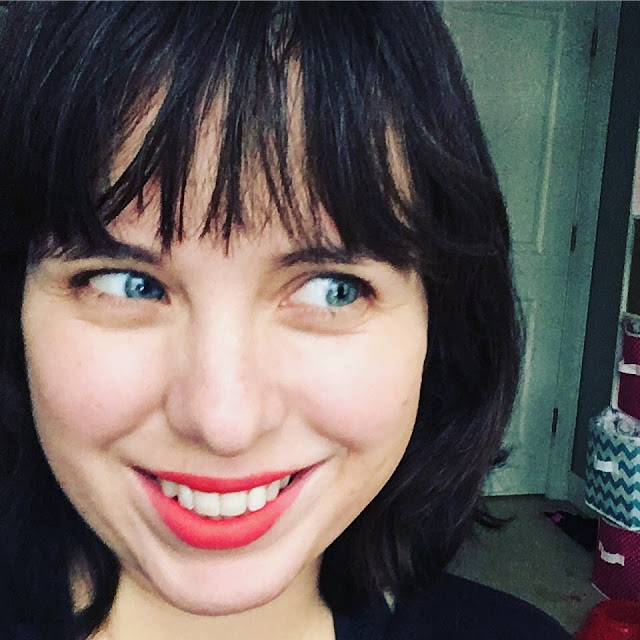 The first sign that the last child in the house to get sick, was getting sick (with this round of this virus), was when she lay down like this in the doctor's office, instead of continuing to fight her way past me as she tried to ransack the unsecured drawers full of supplies (and let me tell you the pulmonologist has some neat to a 17 month old supplies).

The second sign was when the pulmonology PA said she has a very red throat.

The third was when she tried to fall asleep in the shopping cart at Target where we stopped to pick up a few quick last minute supplies after sleeping all the way from Lansing to Grand Rapids.

I think the last of the kids has officially succumbed to whatever the virus (fourth virus) of the season is.

On the (barely) sunny side, I'm hoping this means that she'll be feeling better by Christmas because this bug only seems to last for a couple days.

M is for Mermaid.  Or Merman.

I still haven't figured out who this superhero is, but I did speak with Maggie's teacher today and determined that none of the boys in her class are missing a dearly cherished toy, so at least there's that.

I'm guessing she loves it because of the M.  M is always for Mermaid around here.  Even on a superhero.

Do you know his identity? 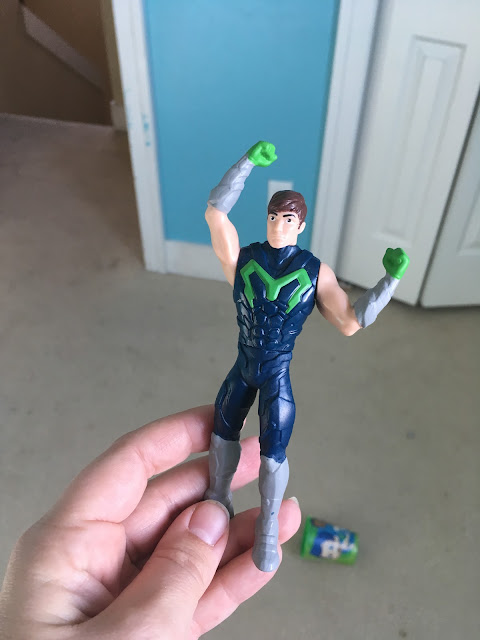 "Mom!" Patrick called to me, yesterday, from the living room.  "I caught a Pikachu!  I'm not keeping him in his ball."

I turned to see the Pikachu, lingering near the staircase.

I just had to hope that it wasn't going to electrocute anyone.

I did dance around after catching a Delibird last night.  I know, I know I might be the last person on the planet playing Pokemon Go (okay, my Facebook Pokemon Go group tells me that isn't true... I think I just got a little bit geekier with that admission).

Anyway, here is  the Pikachu that Patrick caught: 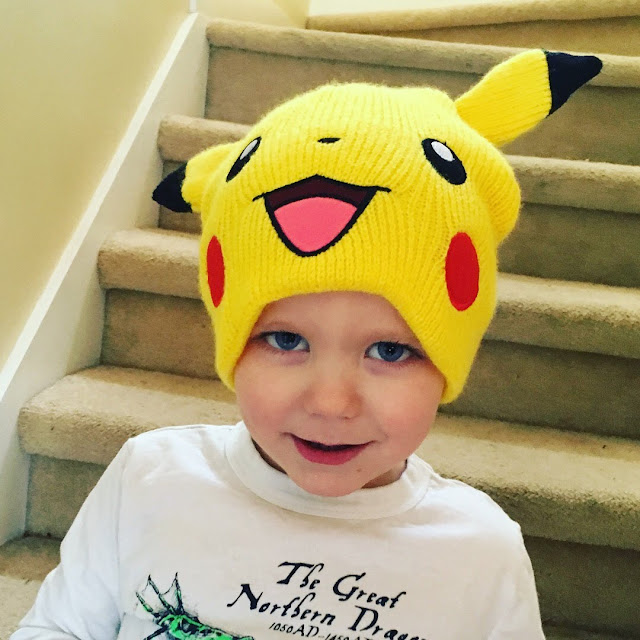 As with the scissors it took her longer than I expected to overcome this gate.

And now it's really, really easy for her to get past it in about three seconds. 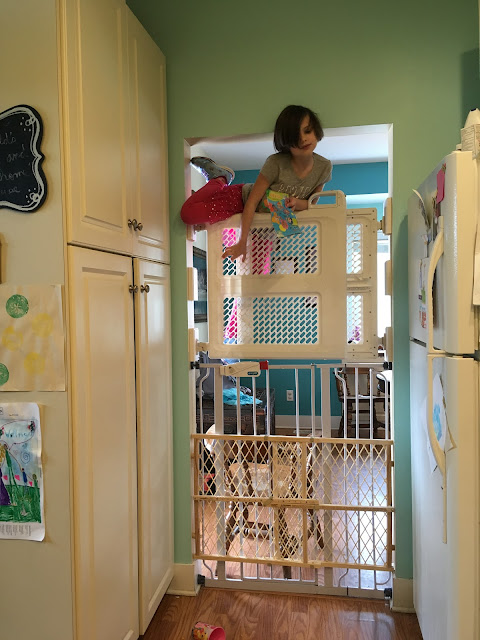 Yesterday was Patrick's last day of school before Christmas break.

I was worried he might have been feeling a little shy, switching schools midway through the year and starting at a new school, and having to make new friends.  It was a relief to see our little social butterfly bouncing around, including being the first one to race across the room when a special guest arrived: 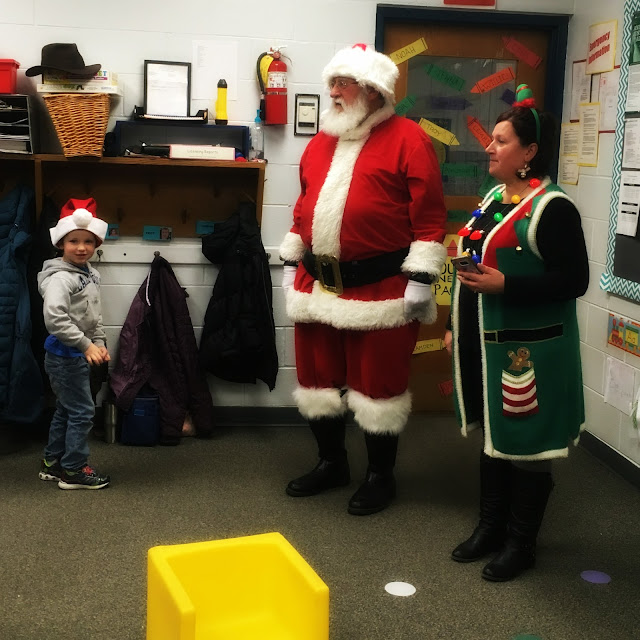 The other night we were scrolling through our various Netflix and Amazon options for the movie portion of family fun night when I came upon it.  The obsession of my Kindergarten/First Grade years.

I may have squealed.  There was definitely giggling.

By the time it was on I had Patch and James convinced that it had to be The Best Thing that they had ever seen because of my descriptions.  Or that it might be nearly as cool as Wonder Pets.

James volunteered that he was Battle Cat, because Battle Cat is Green like Gecko.

And unlike many shows it was just about as good as I remembered it being. 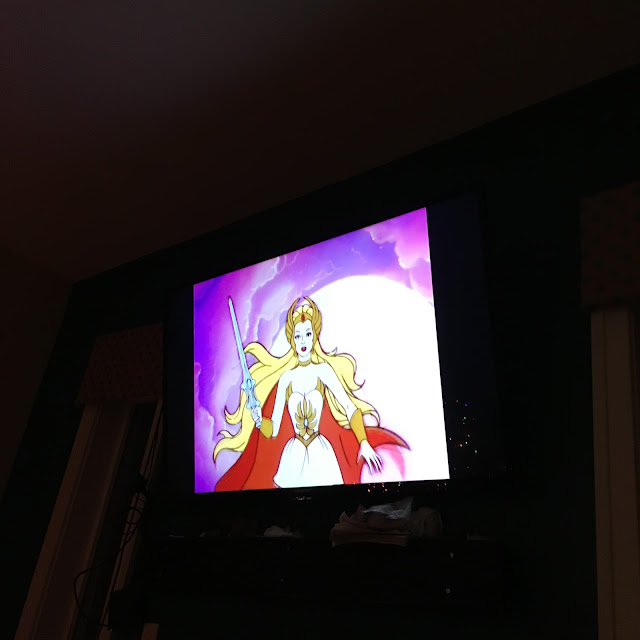 If I don't blog before then, have a very Merry Christmas!