I think I may have gotten my Christmas wish for the year and for that reason I have an update, and it is finally happy. 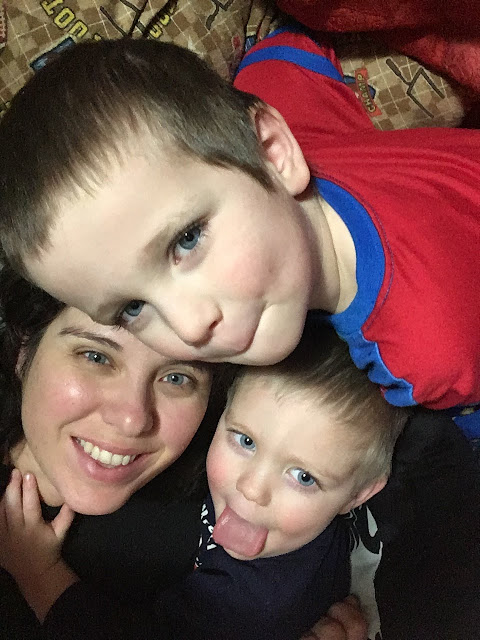 I went back to see my doctor last week because I was still sick.  I'd been sick for nearly fifty days, including low fevers, and almost non-stop headaches, neck pain, and pain that felt suspiciously like my kidney infections of old since I had a fever of 105.2 on November 4th.  My doctor's office was now about to go on holiday for Christmas, and so, after three weeks without an appointment I gave it one last try.

I knew that if I saw my doctor he would concerned and probably a little bit upset that I hadn't come back sooner.  He had not liked that I'd had a fever for thirty days.  He wasn't going to like that we were now past forty five.

But he was booked solid and so I saw an office partner, who I'd never met before and she said that I was perfectly fine, and had "the common cold" with the air of someone who's time had just been wasted.

I mean, I'm sure it looked like I was big whiny baby who had come in with a cold.  She could see that I had a fever.  According to her records, since my neurology appointment for migraines three days earlier I'd lost eleven pounds (my first neuro appointment in three years since I can finally take migraine meds now that I'm neither pregnant nor nursing).  And I couldn't keep much food down.

It didn't feel like a cold.  I mean yes, I was coughing and I did feel like I had a sinus infection too.


"Fine, I'll give you a Z-Pack, but don't take it. It won't help. What you have isn't bacterial. It won't do anything. I'm sending it in now.  Do not take this before Thursday.  At the earliest.  If you get much worse.  It's not going to help you at all."

"I've had a fever, non-stop, for more than forty five days now.  At what point do I worry?"

She shuffled me out the door and I managed to check out before bursting into tears in the parking lot, while making a mental note that I would be more careful to make sure I saw my own doctor even if it meant waiting a few days.

I filled the Z-Pack because there was really nothing else to do.  And I took the first two pills that night because I hoped that maybe she was wrong and that it would help and I had been sick for what felt like a long time and was desperate.

And probably because I remembered the days when patients with mitral valve prolapse (which I have) took antibiotics before dental procedures... and while I know studies say it's not necessary... after you've been sick a long time... you start to wonder and look for answers everywhere, even if you logically know that if you had managed to pick up something bacterial things already would have likely taken a very bad turn.

Now to go back, so that that previous paragraph makes a bit more sense. The night before I got sick I had a cavity filled.  It took over three hours to do the one cavity because while it was small, it was in an awkward position.  It went below the gum line and there was so much bleeding they had to do something to stop it. It was pretty miserable.

When I had a slight fever the next day, I went to my race and slogged along, because I figured that the fever was my bodies response to what had happened with the filling. Later, when the fever went up six degrees, I assumed it was a virus, that it had nothing to do with that, because my kids had been sick the previous week and had some pretty high fevers.

Two days into the antibiotics I was up cleaning the house.  After four days I was outside cleaning out the mess that had accumulated in my car after not being cleaned out for two months (usually that's a weekly chore).  And yesterday I was on my feet all day, running errands and having fun with the family, and while I get tired more easily now and have to sit down more, I felt fine.

Yesterday was the first day since I finished the course of antibiotics.  I'm a little nervous that whatever it is, is going to come back.

And I'm thankful it's gone.  I don't know if it had anything to do with the filling, or if it was all purely coincidental.  I mean I guess I don't even know for sure if it was the result of taking the antibiotic or if I just finally got better at exactly the same time, although I do tend to credit it, since I felt pretty significantly better within twenty four hours and improved more and more with each dose.

I just know that, right on time, I got my Christmas wish.

Thank you to everyone who prayed and reached out to offer well wishes.  It has been one roller coaster of a fall and winter so far, and I am looking forward to going to Mass today and tomorrow.

Have a Merry Christmas!  I'm so happy to share this news!
Posted by Cammie Diane at 7:49 AM