Which is strange sometimes for me because the three older kids all have varying degrees of speech delays (and are all in speech).

He graduated from Early On the day he turned three, shortly after graduating from the PT that started when he was seven months old.  He's taking gymnastics once a week now, which I think is helping him continue to get stronger and stronger, and you really can't tell that this same little kid couldn't sit up until he was nearly a year old.

I, not infrequently, have found myself marveling at how easy speech is for him.  And by extension how much easier life is with a two, and now three year old, who can tell us what's wrong.  Because he has words he's much less frustrated, generally, than the older kids were at the same age.

His early interventionist and I used to talk a lot as he was nearing graduation about how he isn't just verbal though, he's hilariously funny.  He intentionally tells jokes that have all the adults around him cracking up.

And they're particularly funny because James so often has his very serious "Grumpy Baby" expression until he delivers the punch line.

Last night before bed he and Patch were asking to look at baby pictures, and both boys were laughing hysterically over James' expression in so many of his pictures.

It started, more or less, from the day that he was born.  In every single picture he had, what would later become his trademark James' frown:

As he got older the perfected the look:

It could range from slightly concerned to aghast at the antics of his older siblings:

He was always up for glaring, usually before breaking into an elusive (on camera at least) smile.

The other day we were walking down the stairs together and he pointed out this picture, which is hanging on the wall.

I asked him what he was thinking and why he was frowning.  We'd just gone through a corn maze, had walked through a pumpkin patch and had gone on a hay ride.

He was having a fun and running around.  And then he paused and I had snapped this picture on top of the hay fort.

Why the frown? I asked.

"I was worried that you were going to leave me.  In that barn.  You know you were always doing that. Leaving me in barns.  All the time."

I assured him that he had never in his life been left in a barn and he started to chuckle.  "Yup, always leaving me in barns.  All the time.  Every day."  followed by hysterical laughter at the silliness of his story. 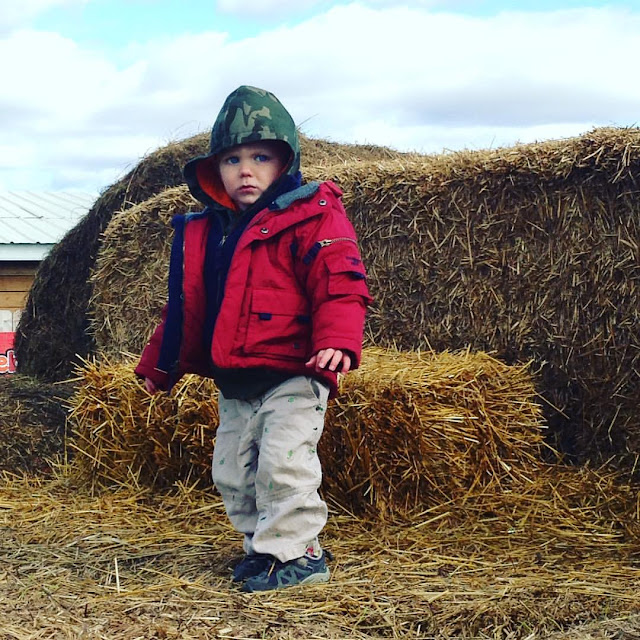 I pointed out that he has never, in all his life, been left anywhere, but the story of the barn has quickly become a favorite that he likes to tell.

As he's gotten bigger his face is no longer quite so much a resting frown and he poses and shouts "take my picture!" whenever he suspects a phone might be in camera mode.  But once in a while the Grumpy Baby frown peeks out and I'm always interested to hear his narration of why he was frowning when I show him what I snapped. 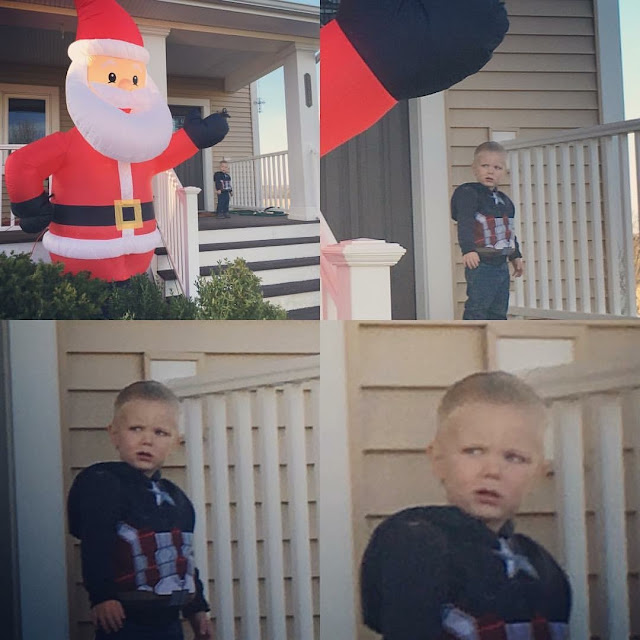 And these days his smiles are nearly as dramatic as his frowns.

I still can't believe that he's three.  Although he still refers to himself as "the baby."  And when I ask about Tessie he says that she is "tinier."

I can't wait to hear what he's going to come up with next!
Posted by Cammie Diane at 10:06 AM