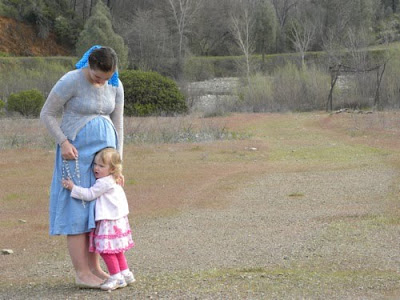 A couple of weeks ago someone online told me, after reading my blog, that she found me to be “spiritually immature.” I believe, from what was said, that it all went back to my headcovering series. I managed to keep from firing off a knee jerk response (“I’m not sure calling someone ‘spiritually immature’ is the most ‘mature’ response”).

Instead I took a deep breath and swallowed my pride and admitted that I do have a lot of growing to do. I then asked that she pray for me.
Did I think that she was right on the basis of her comment (my defense of headcovering as a sign of "spiritual immaturity")? No. But was the underlying claim true? Yes. I still have a lot of growing to do! I am spiritually, very much like a toddler, taking shaky steps on unsteady legs, praying that God keeps me upright!
Unsurprisingly this received no response at all (actually, the way the conversation had been headed I wouldn’t have been altogether surprised to receive another snarky comment… so I guess no response may be the best possible end result).

Perhaps that’s why, recently, I’ve noticed online accusations (towards others) of “spiritual immaturity” that got me thinking about what is being said when those words are flung around (or are at least implied).

The words themselves are kind of redundant. Most people, even people who try very hard, aren’t living lives of “heroic virtue.” The vast majority of us aren’t saints (yet). Hopefully we all will be someday. After all, the only tragedy in this life is to not become a saint.
When I hear the accusation, either said in an outright way or implied, my first thought is that while it’s a) not a very nice thing to say, it’s b) probably true and lastly c) possibly says more about the speaker than the listener since saying that someone else is “spiritually immature” gives the speaker an air of superiority that sounds suspiciously like pride.

It’s hard to develop spiritually in a world where so much emphasis is placed on the physical world and the “importance” of the individual. I often feel like I’m taking baby steps on my journey and slipping and sliding backwards when I lose my temper or say something unkind.

Still I am grateful when my conscience tells me that something is wrong. That sting of conscience is preferable to the silence that this world cultivates when faced with evil.

And prayerfully, through God’s grace, may each of us grow spiritually a little more each day.

Hopefully, as we do, we can find ways to help others on their own journeys towards God, without condescending and pointing out the obvious, which in this case is a struggle that each of us must strive to overcome.
Posted by Cammie Diane at 1:40 AM