Answer Me This: On Sunglasses, Cheese and Boycotts

This may be the last installment of Answer Me This and so I just couldn't miss it.

1. What is your favorite picture book?

I have so many favorite kids books that it's just about impossible to pick an actual "favorite" but I thought I'd share this particular book that is definitely worth reading if you have a wiggly kid who loves to move.  I think Gina first suggested it to me and I went right over to Amazon and ordered it.  And while it doesn't have enough mermaids to hold Maggie's attention just yet, Sadie loves it. Press Here

doesn't have spectacular pictures.  It starts with a simple picture of a yellow button.  But as you press, shake and slide that "button," following the author's instructions, giggles are almost certain to follow.

Be warned though.  It is definitely a book that you may find yourself reading again and again and again... even with a child who doesn't usually make repeat requests to hear the same story repeatedly!

Only about one particular topic.  Abortion.  If a company gives to Planned Parenthood we don't shop there or buy their product. And yes, that means that there are lots and lots of things that we don't buy.  I'm not big into talking about it or convincing others to do it.... but I just haven't been able to get past the lump in my stomach of buying something from a company who I know donates to support the major abortion provider in our country.  I don't do it for any other topic, but giving to PP is too big for me to ignore.

At the same time I respect other people's right to boycott stores they disagree with, and am more likely to drive a couple extra miles to pick up the craft supplies that I need at Hobby Lobby, instead of the other two major craft stores that are closer to our house, because they've taken a stand that I agree with and I want to support them.

And of course over the years I've had plenty of people point out that such a small number of people boycott the things that we do that it doesn't make a difference to the company, so why do it?  The answer is that it makes a difference to me because I know that I'm doing whatever I can to spend less on companies that are using their funds in that way and so I personally can't in good conscience make any other decision.  And believe me... I've tried... and just felt sick about it.

3. How do you feel about cheese?

So ever since Patch came along with his dairy allergy and I had 16 months without any sort of dairy my already probably-not-entirely-healthy love of all things cheese has been intensified.  I think I can probably blame it, at least in part, for my current gigantic pregnant size, because I keep thinking that I should eat all of the cheese (or ice cream) that I possibly can because with two out of three kids unable to eat dairy what are the chances that this next kid won't follow his older siblings example and have some sort of allergy by two months old?  By the allergist's laughter when I asked that question I would say "not very good."

And so at the moment I'm kind of obsessed with cheese... and I'm really hoping that this next kid loves it too (and can eat it!)!

4. How many pairs of sunglasses do you own?

One pair that has not been broken by a) being dropped on the ground by my own clumsiness or b) been pulled apart by twp cute little sun glass destroyers in my life.

Especially this one.  He's developing a special love of stealing sunglasses and putting them to the test: 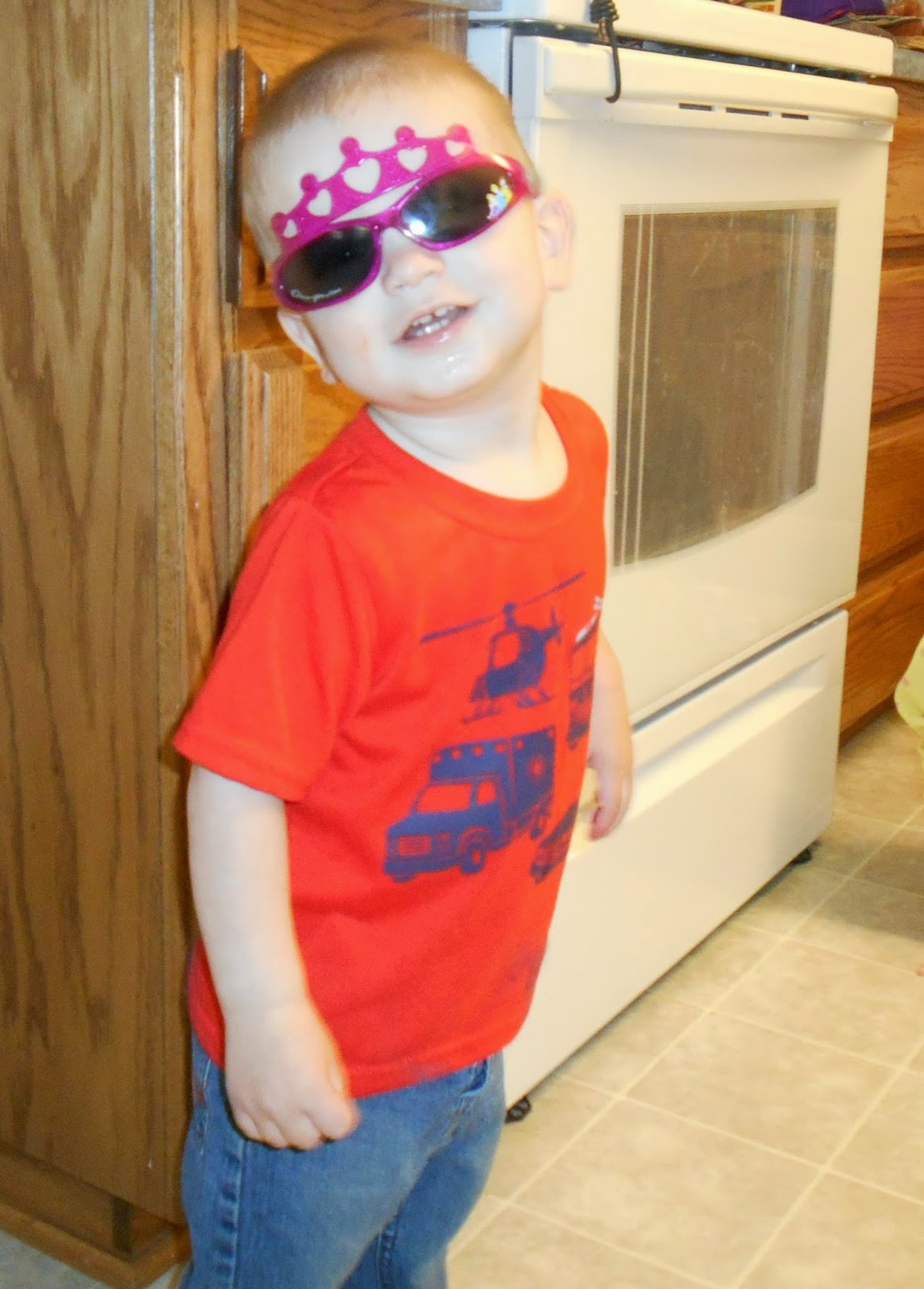 And I hate it when my sunglasses finally do end up breaking.

When Paul and I were dating I once mentioned how almost completely impossible it is for me to find sun glasses that don't look totally ridiculous with the shape of my face.  He didn't really believe me. Then he was with me when I tried on sunglasses and was rather surprised how pair after pair looked so very wrong.  So when I find a pair that works I hope that it lasts for a very long time.  Although Patch and/or Mae almost always ensure that that doesn't happen.

5. How long has it been since you went to the dentist?

Is it bad that I can only figure this out because the last time I went to the dentist they didn't do x-rays because I was pregnant and I happen to remember which pregnancy that occurred during.

And it wasn't this pregnancy.  Or the last one.

One of these days we'll either have dental insurance or extra money lying around to go to the dentist, but until then four years and a half years (and counting) it is.

6. If you could visit any religious site in the world, where would you go?

Lourdes. Sadie has made me watch The Song of Bernadette

many, many times, and read her little book about Bernadette nearly as many times and so it's the first place that comes to mind.

If I was returning somewhere we've already visited I would have to struggle to narrow it down between Mount Tabor, Gethsemane and the Church of the Holy Sepulchre.

For more Answer Me This head over to Catholic All Year!
Posted by Cammie Diane at 9:54 AM