When I first converted to Catholicism I found myself struggling with modest dress.

Throughout high school and college I'd spent quite a bit of the money I'd earned working as lifeguard/barista/pet store clerk/ assistant in the training room on clothes, and most were pretty standard fair for what you find would find in any junior's department, or in any of the other stores that are generally aimed at the high school/ college set.  For the most part they were strapless or had teeny tiny straps, or were super low or super short... and across the board they were ultra tight.

And suddenly they just didn't feel right anymore.  If I wore something that was moving, in my mind, into the too short/tight/low category, I'd find myself tugging at it until I finally threw my hands up in the air and went to change.

Around the same time I began to read more about Catholicism, both in books and online, discovering first Catholic forums and then the Catholic blogosphere.  I read quite a few books with very traditional views on dress, marriage and femininity and quite a bit of what I read resounded as true, or at least bits and pieces of the chapters did. 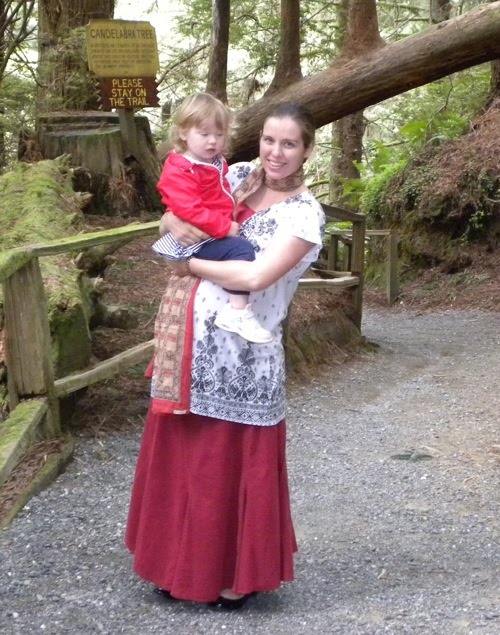 And so, over the next months, I came up with rules for myself, to help myself navigate a complex world of clothing that I wasn't a natural at understanding as it was.  You see I've never been naturally inclined to understanding fashion.  When I went to high school I still loved horse t-shirts and jeans.  And when I tried to dress fashionably and fit in... well it just wasn't my thing.  But I knew that there were women who looked fabulous and modest and I was going to give it a try, even if my attempts didn't look quite so lovely.

In the beginning I did very closely follow those certain oft-quoted standards for modesty that I see floating around the Catholic blogosphere rather regularly and passed off as standards for the laity, although they were actually advice for nuns and sisters that were laid out decades ago.  I embraced those standards as completely as I could with the clothing pieces that I found and could afford here and there on sale racks and at yard sales.

Around that time I started blogging, and would often stumble through posts on my attempts at dressing more modestly, trying to explain what I was feeling.  I met both women who could relate to the steady feeling that I found rising in my chest that something needed to change and I found an equal measure of criticism from people who seemed only too enthusiastic to call names, tell me that they're husbands were so, so thankful that they weren't married to someone like me and let me know that I looked like a freak (these insults usually included disparaging remarks about other religions as well, that I'd rather not bring back up specifically, since they were so ugly, but that showed a general hostility to any form of dress that didn't conform to typical American standards).  Most readers probably didn't really care one way or another, but the comments that came through were usually from the people on one end of the spectrum or the other, as so often happens.

After about a year of thinking about modesty, I made the move over to wearing all dresses and skirts.  I never said that I thought that pants were immodest, and honestly, I didn't find them immodest for other women, but in embracing my vocation as a wife and new mother I suddenly felt that dresses better expressed the role I found myself embracing and exploring.  It was almost a uniform of sorts.

It didn't take long for dresses to feel more comfortable than pants and I really found the arguments that most people made about dresses to not be true in my case.  I didn't live someplace particularly windy and I was constantly down on the floor with my toddler, but with many of the flouncy fun skirts I found movement just wasn't a challenge.  And with layers I could stay toasty warm when it was in the teens outside.

I had readers ask how I stayed warm and I even wrote a post about how it wasn't a problem at all and could be easily done.  Looking back pride was certainly already beginning to creep in (or maybe had already arrived in a torrent and I was totally submerged) but as so often is the case I couldn't see it, because dressing modestly these days was at the same time rather humiliating, especially with the fairly frequent mean comments I received fairly regularly on my blog back in those days.

When the ice storm hit this last year I didn't have a single pair of pants sitting on the shelf in my closet... after all, it had been years since I'd worn pants. The temperature with wind chill was regularly below zero and we were trying to go back to the house during the day to see if we could move back during those eight days without power, and finally I broke down and dragged everyone across town to Target and bought a pair of jeans.

And then I found myself not wanting to wear them... at all.  I turned that problem over in my head over and over again.  They weren't too tight.  If I saw those pants on someone else I would think were perfectly fine.  So what was the problem?

I tried to ignore it, but it was sitting there, facing me while Paul was going into stores trying to find firewood where none existed.

I didn't want to put on those pants because then I couldn't say "I haven't worn pants in more than three years."  It was as simple as that.  And it was pride pure and simple.

There are lots of reasons that women wear dresses all the time that have nothing to do with pride.  They're the reasons that I first discovered when I began thinking about wearing dresses.  But over time the reason had changed.  In the beginning I absolutely had needed to change the way I'd dressed, and I think that for a time over correction was beneficial as my heart healed and my view of how I dressed and my body and modesty in general, apart from dress, began to form, but I also believe that over time the reasons for making those changes had begun to slip away and had hardened into a sort of pride for lasting that long while doing something that many saw as radically different.

So I put on those perfectly practical pants and wore them when it was -15 degrees outside and broke that gloriously prideful going-on-four-year streak.  And when I went out to shovel snow I wasn't wrapped in a wet heavy skirt afterwards.

And then I started to fret.  I remembered how I basically got slaughtered (or felt like I did) when I asked if it was okay to wear sleeveless shirts when I was out walking, pushing a stroller, when I was pregnant and sweltering in south west Florida's super humidity (oh how I hate that that is still one of my most popular posts of all time).  And I also knew that a lot of women had related to my journey towards wearing skirts... would I suddenly lose all the friends I'd made across the blogosphere if I admitted to... wearing pants?

Still, it took me months to sit down and write this post.  And honestly, it has probably affected my writing in general as it always does when I have something that my brain apparently wants to write about that I keep trying to hush and push to the back burner to simmer for a little bit longer.  I was sure I wouldn't be able to find the right words.  Maybe I still haven't.  And yet I felt compelled to write about this roller coaster of a journey, which in part has involved that aspect of modesty that involves dress and that probably bores 99% of the people reading it (who are at this moment, if they've read this far thinking: Did you really think anyone would care?!?!?!).

In the end, these days I do wear dresses most of the time.  It's what's in my closet and I do find them pretty comfortable after years of wearing nothing else.  But pants are in the mix now too, especially when it's practical, but also on some days, just because the corduroy maternity pants that have been tucked away in a box for the past six years that I discovered on my trip back to California are quite possibly the most comfortable piece of clothing in existence... and I'm finally starting to accept that I don't need an excuse to wear them!
Posted by Cammie Diane at 10:37 AM