Getting the Big Kids Ready for a Baby: My Strategy

Over the past five years, since we first introduced Sadie to Maggie, I've given quite a bit of thought to the subject of adding new siblings to the family.  The first thing that I found when I was pregnant with Sadie was how utterly ridiculous many of the articles I ran across (usually in parenting magazines) were.  There was no way I was going to be reassuring my older child that I "would still love them" when the new baby gets here.  Of course I would still love them and they're shown love every single day... but reassuring them and telling them not to worry that they would still be loved seemed to put an idea into a busy little mind that wasn't already there.

In a way it reminds me of an article that I read recently about an Italian politician who made the mistake of saying that he is not an authoritarian dictator, and how that statement instantly set in the minds of the people that he is just that.  The article compared it to Nixon saying "I am not a crook" and how saying those specific words, instead of saying something positive (like maybe "I'm an honorable man") instantly put it into the minds of the American people that a crook was exactly what he was. 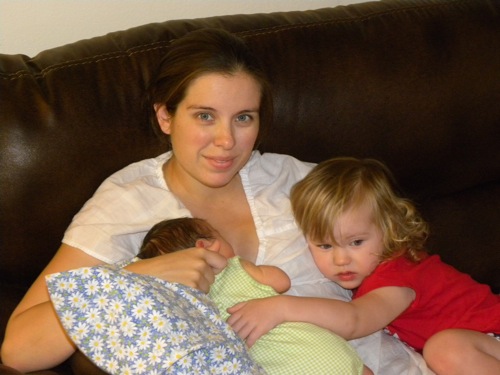 In my mind, "Don't worry Sweetie, when the new baby get's here we'll still love you just as much" falls directly into the category of things to never, ever say... and that's the problem that I have with many of the "new sibling" books that are out there.

Our new baby welcoming strategy is a little different.  We talk about babies.  All of our kids, from Sadie to Maggie to Patch have loved looking at the pictures of babies in utero in the pregnancy books that I have.  Most of my books are now taped together and worn.  Pages fall out constantly and I keep taping them back in.

A fun little tradition we've also come up with is taking the kids out after we find out the baby's gender and allowing them (and us too) to each pick out a small gift to give the baby in the hospital.  It's exciting for them to go into the store and pick out something for a new little brother or sister.  And it's always interesting to see what they pick out.  For our latest baby the presents turned out looking like this:


The most amusing part of the trip was Sadie's insistence from the time we got to the store that she knew what the baby needed.  She would be picking out something to swaddle the baby and that was that.  When we were in California she also convinced Nani to take her to buy a pacifier for the baby.  So you can see what she thinks babies need: to be swaddled and "binked" (as she would say). 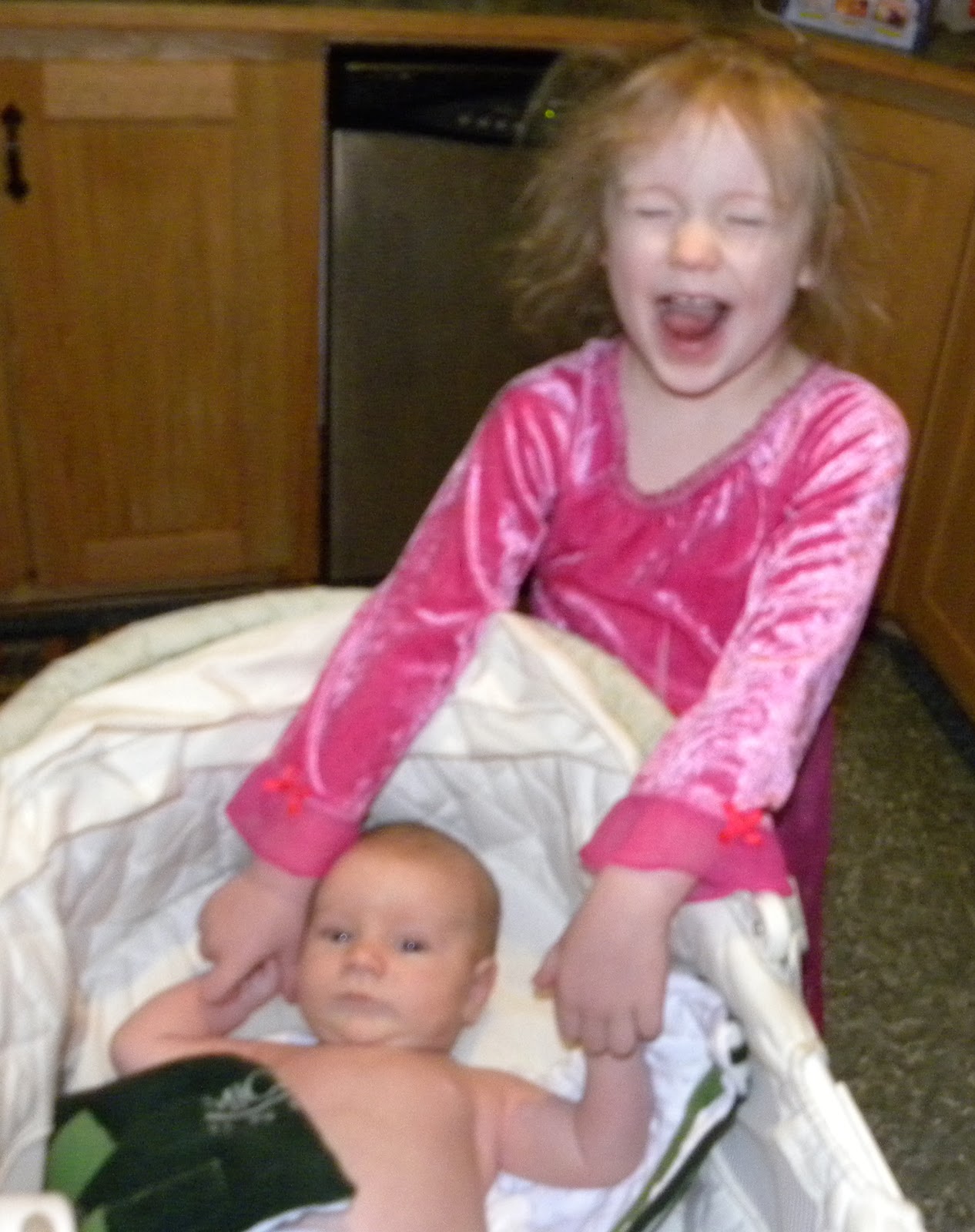 The other half of our little tradition is that I make (or buy depending on my level of preparation and budget) little presents for each of the kids that the baby will give them when they come to the hospital to meet him for the first time.

Mostly these days though, I have it easy when it comes to introductions.  Sadie is over the moon about the new baby.  She talks about him all the time.  Maggie seems to love every single baby that she sees.  Patch is clearly "her baby" and now her partner in crime, but she lights up just about every time she sees a little one and heads in their direction, so I imagine her reaction will be the same as the last time which alternated between ignoring the baby entirely and dancing in front of him to entertain him and wishing she could scoop him up and hold him.

Patch is the loose canon.  He is very much "the baby" who has been spoiled in the extreme... by his big sisters.  When he wants something he gets it... usually from other little hands that rejoice in seeing him smile.  Yet he's nicknamed the baby "Bubble" on his own and talks about having a "brubber" with excitement so I think that his big sister's impatience to meet the newest addition to the family is spreading. 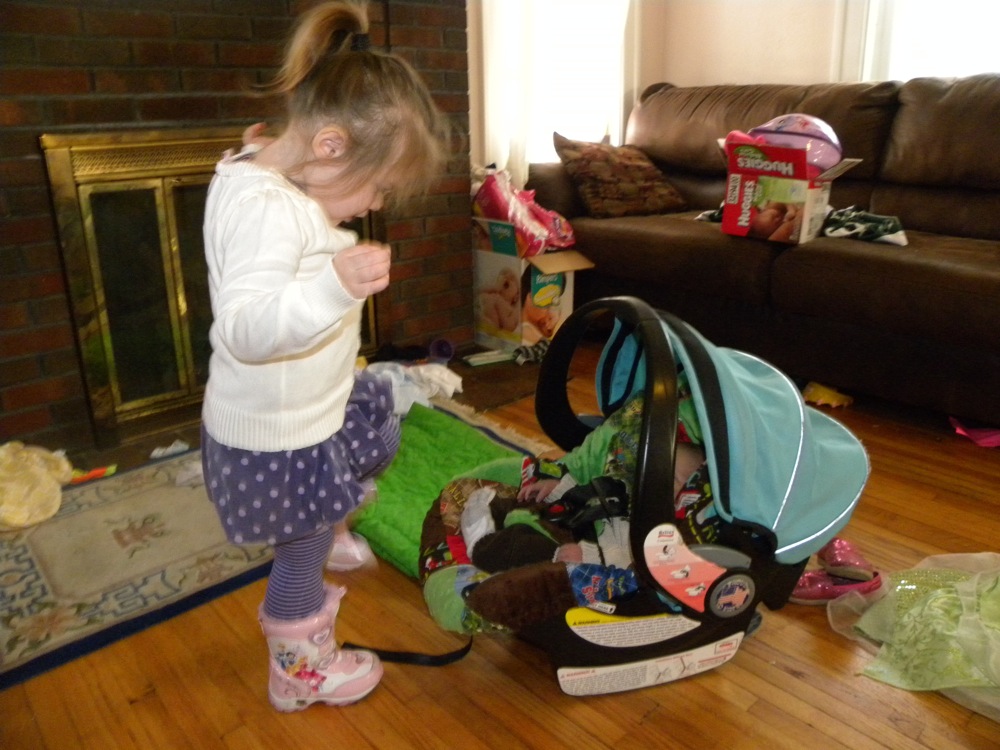 I guess that is the key that we've found to easing the transition each time a new addition arrives has been fairly simple (so far) for us: excitement.  Everyone is excited to meet the new baby and the day is looked forward to with anticipation.  There's a lot of talk about how big the bigger siblings are and how blessed the baby is to have such wonderful big sisters (and now a big brother too) and how fortunate we are to have been blessed with another baby to love.

So far the strategy has felt completely natural and has worked really well for us.

Do you have ideas/traditions/strategies for welcoming a new baby?  I know I have at least one reader who would love to hear them (and if you have any book suggestions you've loved feel free to throw that in too!)!
Posted by Cammie Diane at 12:06 PM