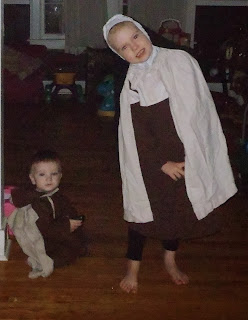 Yesterday was pretty much a dream come true for Sadie.  After Mass she sat in the car practically bouncing up and down in her seats.  Her long legs couldn't hold still and she kept clapping her hands and giggling.

"Oh, it was just a thought that I had."  And Paul and I laughed at the pure joy that was radiating from the back of the car.

"I don't think she was this excited for Disney World." He said as she continued to giggle nearly an hour later.  And I had to agree.

It had all started when she and I slipped into Mass.  For the last two weeks, Paul, who is truly my hero, has taken Patch and Maggie and stayed in the narthex, because with my back these days baby wrangling can just about flatten me and baby carriers are finally out.  So Sadie and I went in together, ready for a quiet Mass that would be so different from the majority of the Masses spent with Maggie and Patch over the last few years. 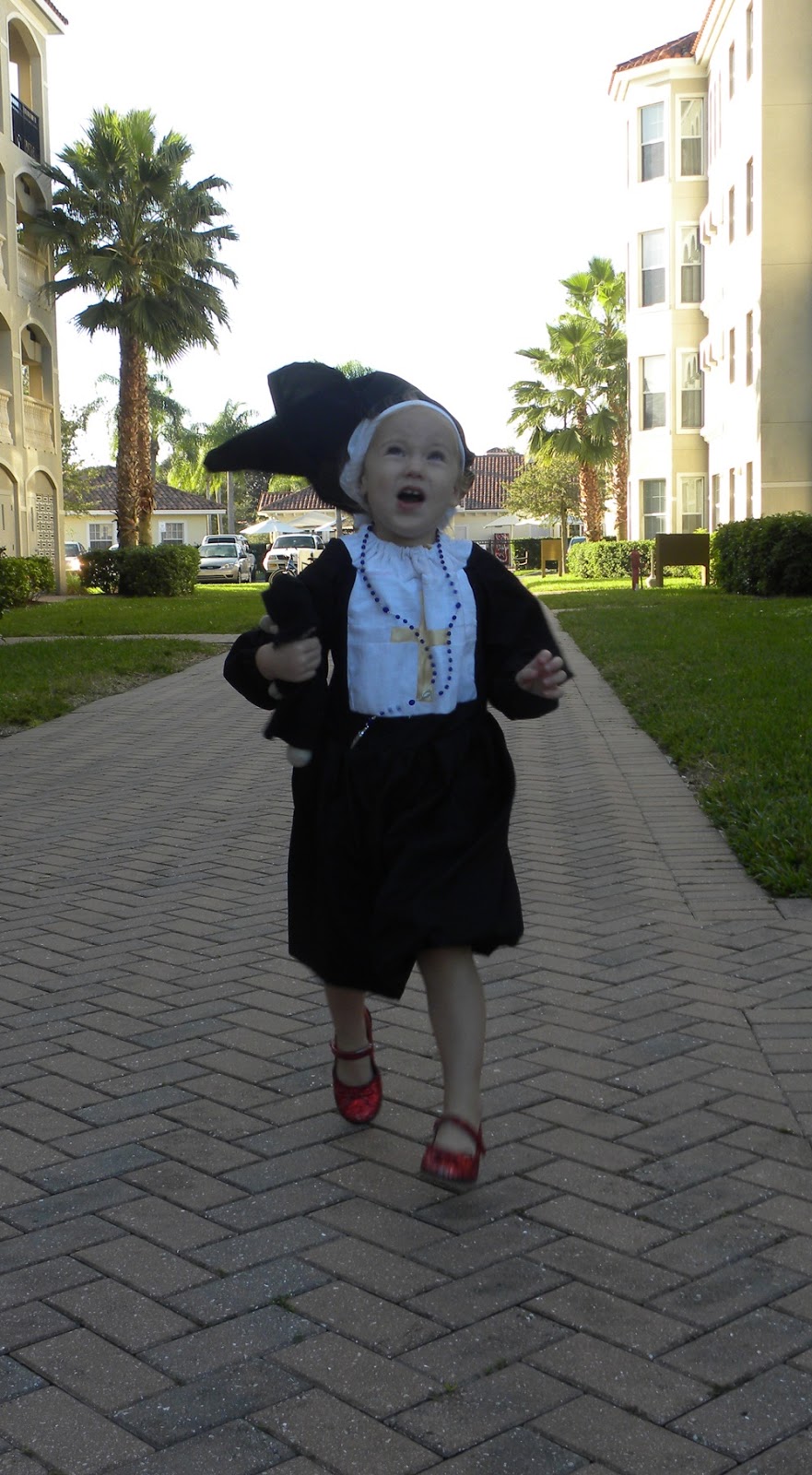 I noticed the white and black habits soon after we entered the church and in a tiny voice whispered to Sadie "the nuns are here."  Her face lit up.  She scanned the church.  Finally she spotted the group of Dominicans who have come to teach at the parish school.  Excitement radiated from her.  She sat up straighter.  When everyone got up from kneeling she remained there for a few minutes longer, apparently lost in thought.

When Mass ended and we were outside in the narthex I told her that she didn't have to if she didn't want to, but that if she wanted to we could wait and talk to the Dominicans before we left.  She glowed as she nodded.  We waited in the narthex for a few minutes, and then I realized that they were surrounded with excited well wishers and that it might be a while and told Sadie that she could go over and wait her turn to introduce herself.  She bounded up to them and then waited, bouncing up and down in place.

I made my way over because, because after having been present when she met Mulan at Disney World (her favorite princess when she was four) I had an idea that this might be one of those rare instances when she was so incredibly excited that she wasn't her normal self, bubbling with a million words and questions a minute. 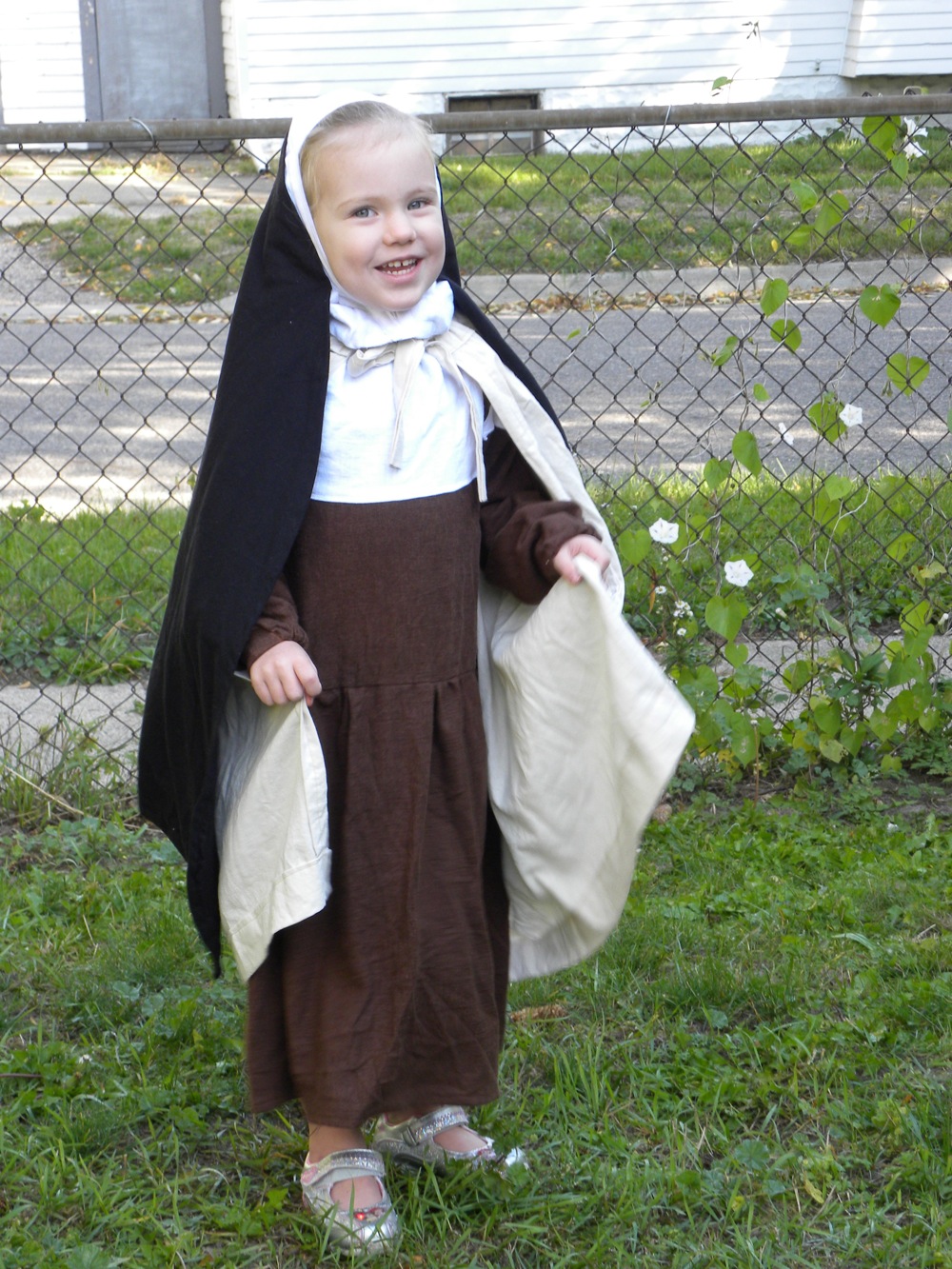 When she finally met one of the nuns, Sister Mary Rita, she was suddenly shy.  She introduced herself, and answered her questions and said a few words, but was mostly just in awe of talking to a sister for the very first time, after basically telling me that she's ready to move out of the house to join a convent for the past three years.

We said goodbye and filed quietly out of the church to find Paul loading the babies into the van.  And then the bubbling stream of words began again.  "Daddy, do you want to know what just happened?  Daddy I just talked to a nun!"

"Do you know what kind of nuns they are?" I asked.

"Dominicans of course!" She said as she continued on with a constant stream of chatter and questions.

And now I can't help but wonder if she'll be requesting a Saint Catherine of Sienna habit for All Saint's Day this year.  I have a feeling that it'll be the first year in a while that she isn't lobbying for me to buy fabric in Carmelite brown.
Posted by Cammie Diane at 8:48 AM