Sadie and a Hail Mary

For the last week Sadie has been counting down the days to this morning.  We had a meeting for a new club/activity/organization that she's joined and after going to the open house and talking with some of the girls involved in it we were both really excited that she was going to be able to be involved.

This morning we loaded up the car and left Paul with the babies and headed out of the house.  Sadie looked at me and said "I should have brought my winter jacket" as she felt the not-really-cold-at-all air (she may be in for quite the awakening when it actually gets below 60...) as we piled into the car and headed north.

We were a few minutes early, so we helped one of the girls unload a troop leaders car, and then I sat down to knit while Sadie fluttered around the room giggling and talking with the other girls as they arrived.

We stood for the pledge and said the declaration of faith (I'd checked it carefully before registering online and had made sure it was something we could say, although I was fairly certain there wouldn't be a problem since we have other Catholic friends involved in the same organization in other states) and then we settled in for the faith presentation.

If you'd asked me beforehand what I was expecting I would have guessed something light and fluffy and not particularly contentious.  After all, this girls' group doesn't have a particular denomination.

The topic came up and was prayer and I found myself holding my breath.   The first question asked was "what is prayer?" and Sadie's little hand immediately shot up and she answered enthusiastically "Prayer is pleasing to God" (her answer kind of surprised me because while prayer is something that we do, it's not something I remember us really going into all the much in our religion course, or in our conversations).  Her answer obviously wasn't what they were looking for, and the conversation continued innocently.  Prayer is a conversation with God.  Prayer is worship.  Prayer can express repentance. 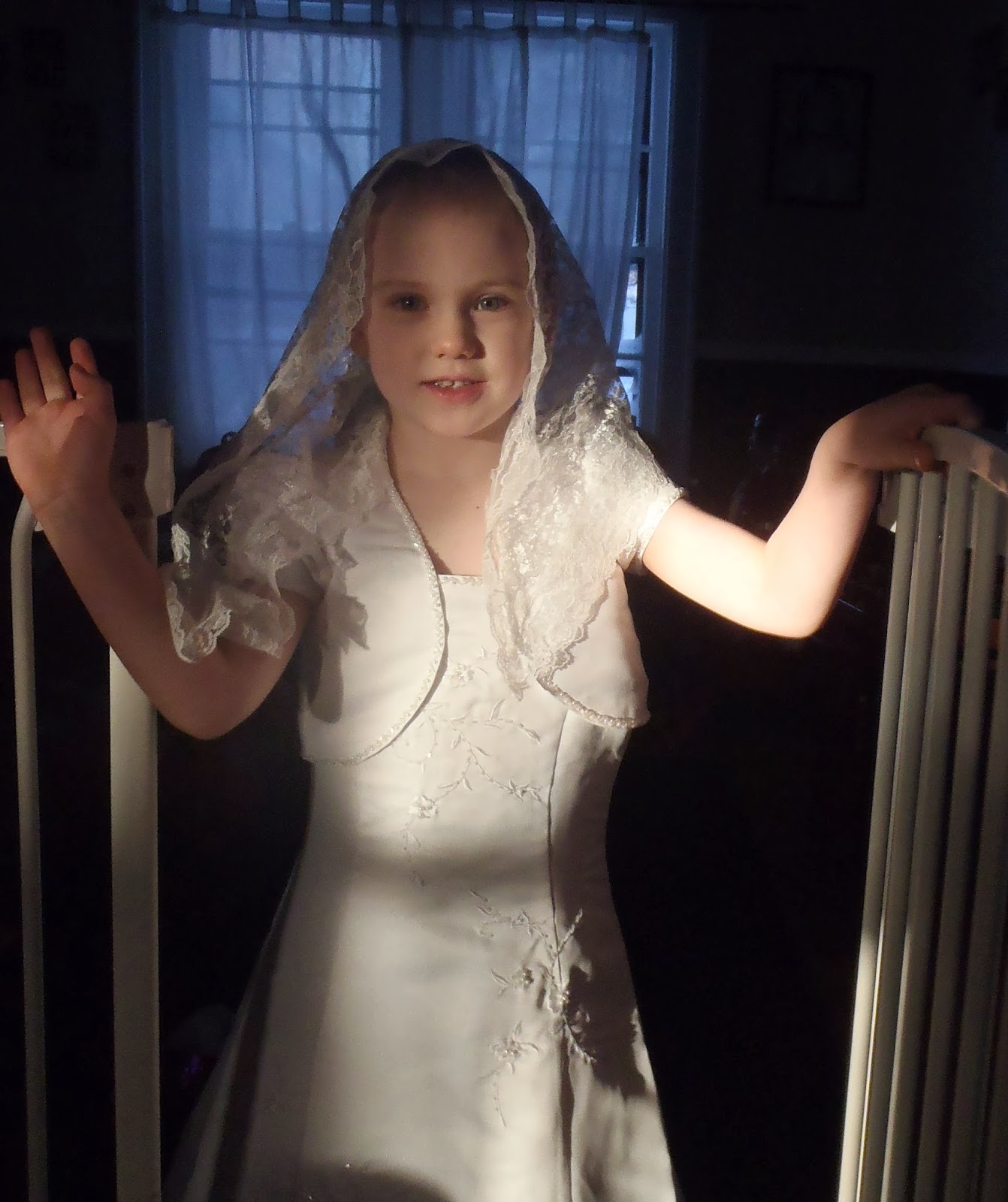 Mangling and misunderstanding intercessory prayer at it's best.

I felt the color drain from my face as my eyes searched for Sadie at the front of the room... Sadie who will tell anyone who will listen that her favorite subject is religion.  Sadie who's ability to memorize just about anything she hears means that it's not unusual for her to quote from the catechism sections that are in her religion workbook.  A part of me was silently willing her not to be listening, while at the same time thinking of the explanation I was going to have to give in the car on the way home about misconceptions about Catholicism and how some people think we pray to statues (we don't) and I was also thinking about cracking open the can of worms about exactly what intercessory prayer is and how we're asking the saints to pray to God for our intentions.

But she was quiet in her seat across the giant room and I started to relax.  "Let's pray before we have our snack" told me that the subject had passed and I began to think about how the meetings might turn into a great opportunity to talk about what we do believe. 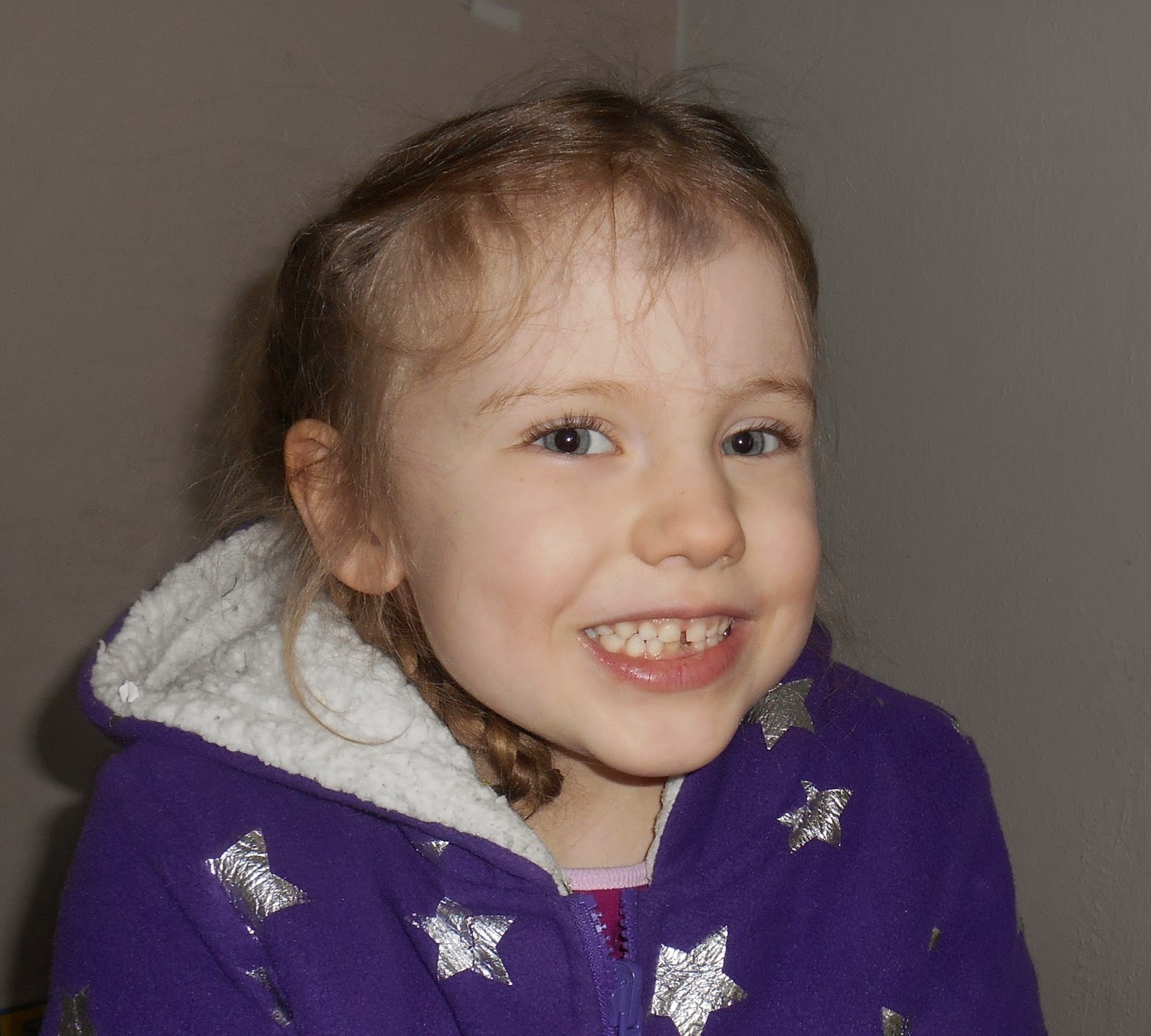 Then I heard her little voice ringing from the front of the room.  She wasn't talking loudly, but the acoustics were very good and her small prayer carried all the way to where I was sitting in the back as she prayed: "Hail Mary, Full of Grace, the Lord is with thee."  The troop leader began to pray over her.  I winced, because let's face it, I'm pretty shy in real life and this is exactly the kind of attention I would generally avoid.  "Blessed are thou among women and blessed is the fruit of thy womb Jesus.  Holy Mary, Mother of God, pray for us sinners now and at the hour of our death.  Amen."

The thing is, if you know Sadie, you know that she's pretty innocent.  Watching her it seemed (and knowing her) it really seemed to be a spontaneous prayer that just bubbled out at the words "let's pray" rather than a response to what had been being discussed.

Afterwards I talked to her about what they'd talked about and she really didn't seem to make a connection between the idea of asking for the intercession of the saints and the "praying to dead people" that was derided at the meeting.

So, we're planning on sticking with this new activity (and in even more exciting news, her new ballet class starts this week too!), although I'm hoping it's not quite as wonderful an opportunity for discussion on what we actually believe on the way home, every single week.  I'm hoping next week is a little bit more "Jesus loves you" and a little bit less what-everybody-else-is-doing-wrong.
Posted by Cammie Diane at 11:40 PM