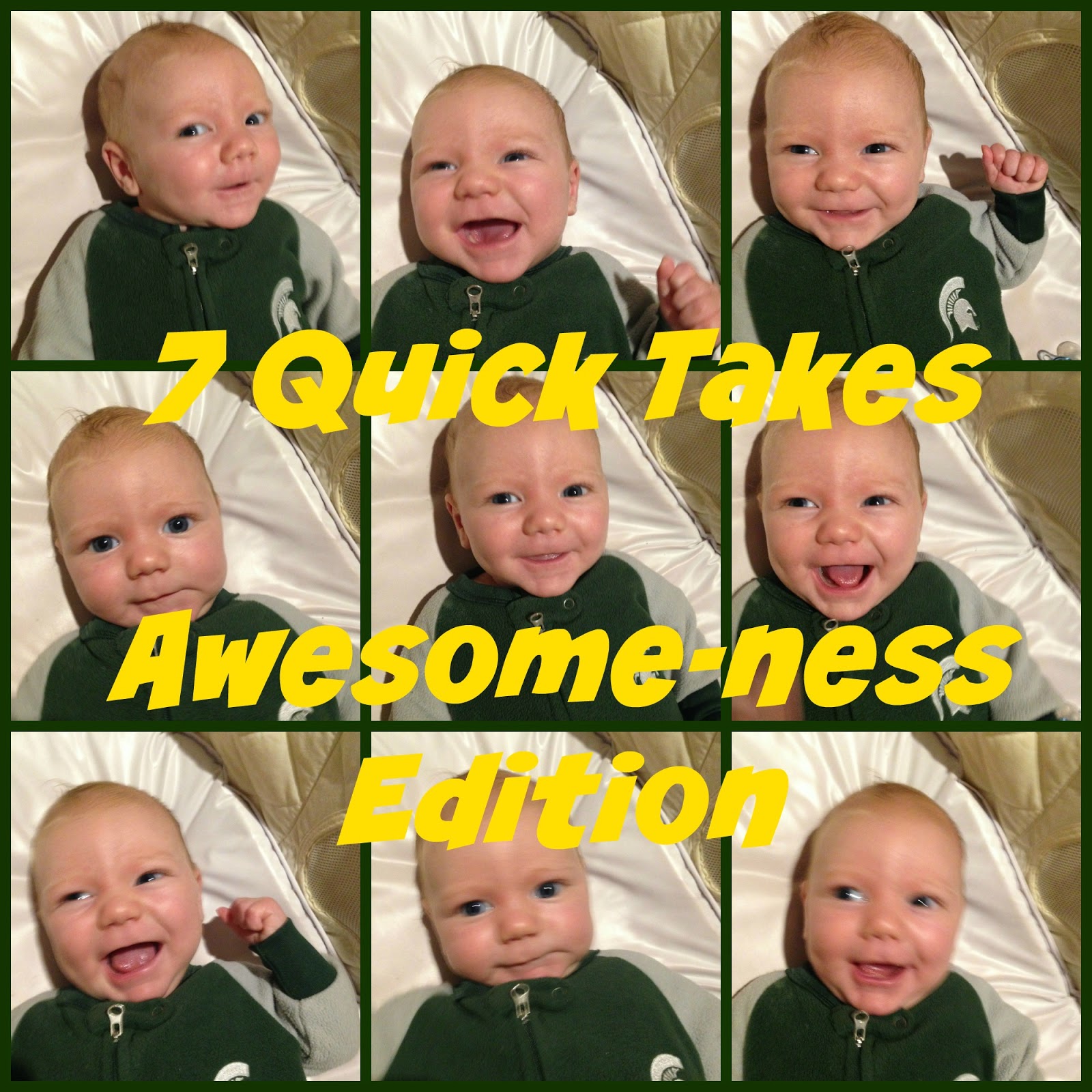 I have to start with the big news of the day first (I already wrote about it on Facebook, but for anyone not on Facebook I thought I'd share it here too).

My doctor called today with the biopsy results and  they were exactly as he expected.  There were minor changes to the cells, but nothing was cancerous (and when he did the biopsy he thought he'd gotten the cells)!

So now it's yearly checks to make sure it stays that way!  It was such a relief to hear!

A certain child in this house absolutely hates baths.  She also absolutely hates having her hair washed.  Actually I'm not sure hate is the right word.  Being terrified is probably a better description.
Earlier this week, shortly before her OT appointment, I brought her into the kitchen to wash her hands and washing her hands turned into playing in the water and suddenly someone was stripping down and getting into the sink.

When the OT arrived she was still playing in the sink and so her therapist came in and when I mentioned how much she hates having her hair washed, she helped me work on washing her hair.

And she very quickly realized that Mae hates it when water trickles across her head.  She also realized that if we took a wash cloth and pressed it against her hair so the water didn't trickle she was totally fine.

Tonight I cleared out and cleaned the sink, brought over the little kitchen step ladder and ran warm water and successfully washed her hair on my own without a single tear.

Hopefully as she gets more comfortable with having her hair washed I'll be able to get her used to the bath tub (I don't think she likes how open it is).  It's a step in the right direction!

Sadie made a hat for herself and has worn it each time we've left the house since she's finished it.  She's quite proud of her accomplishment: 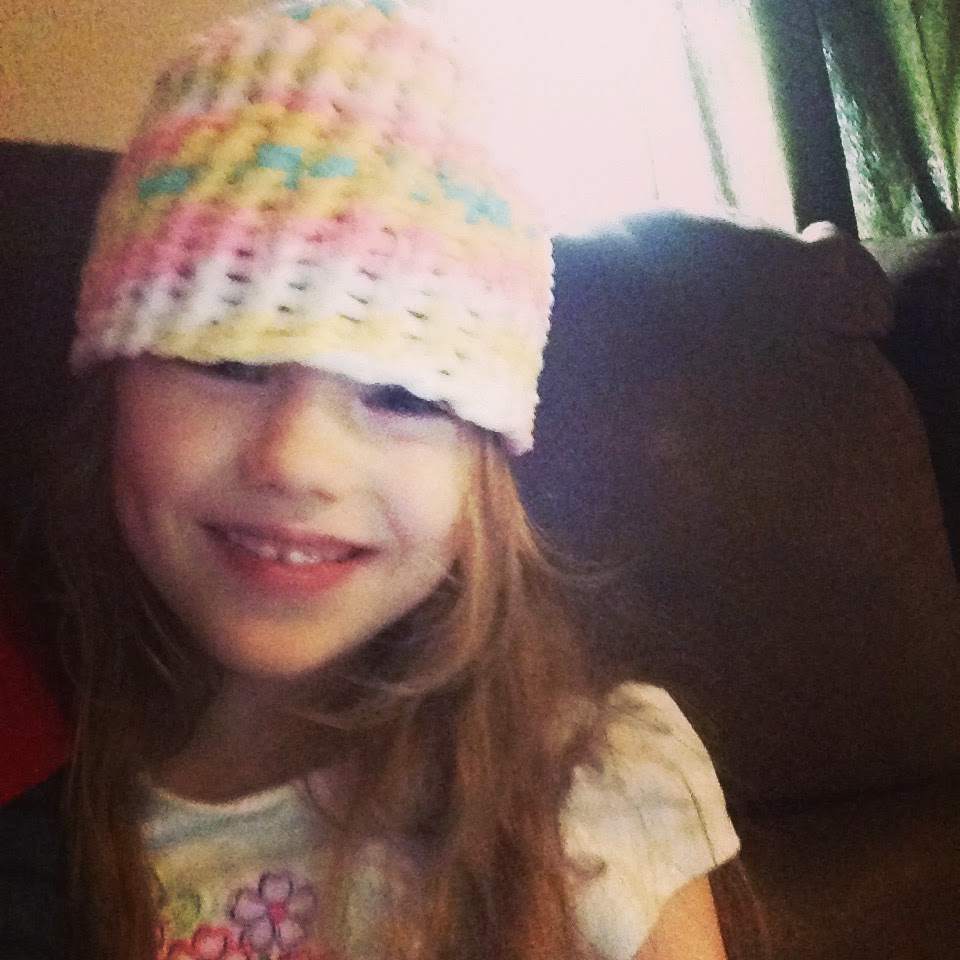 Mae was always our super eater.  She would eat just about anything put in front of her.

In the past year, and especially the last month, she's slowly become more and more finicky, until I don't even know if her favorites (oatmeal and potatoes) will be eaten when I serve them.

Tonight she shocked me my cuddling up to Paul and reaching over and helping herself to his spinach salad with balsamic vinaigrette!  Hopefully this is a step in the right direction.

I've been on an organizing binge lately.  I've been sorting through clothes (Thred Up is going to be getting quite a bit from me), toys, books and just about everything else under our roof.  We sent a huge box of books to Mae's therapy center, have taken a lot to consignment stores, have set aside bags of toys that haven't been played with in ages to donate and have been steadily sorting out things that are broken to recycle or discard.

And I finally feel like I'm making progress.  Last night I stripped the play room down to bare bones.  Our kids all tend to do most of their play by dressing up and running around.  Mae (somewhat surprisingly) is the only one who really plays much with toys.  So I put one toy box that's one foot by one foot to the side and I sorted through the other toys, putting some away and putting some aside to donate until all the smaller toys fit into that box (there's still the bouncy horse and a rocking horse and a few other larger toys that they do play on a lot).

And tonight clean up was much quicker and easier.  Now hopefully I can maintain this momentum and really reorganize the entire house! 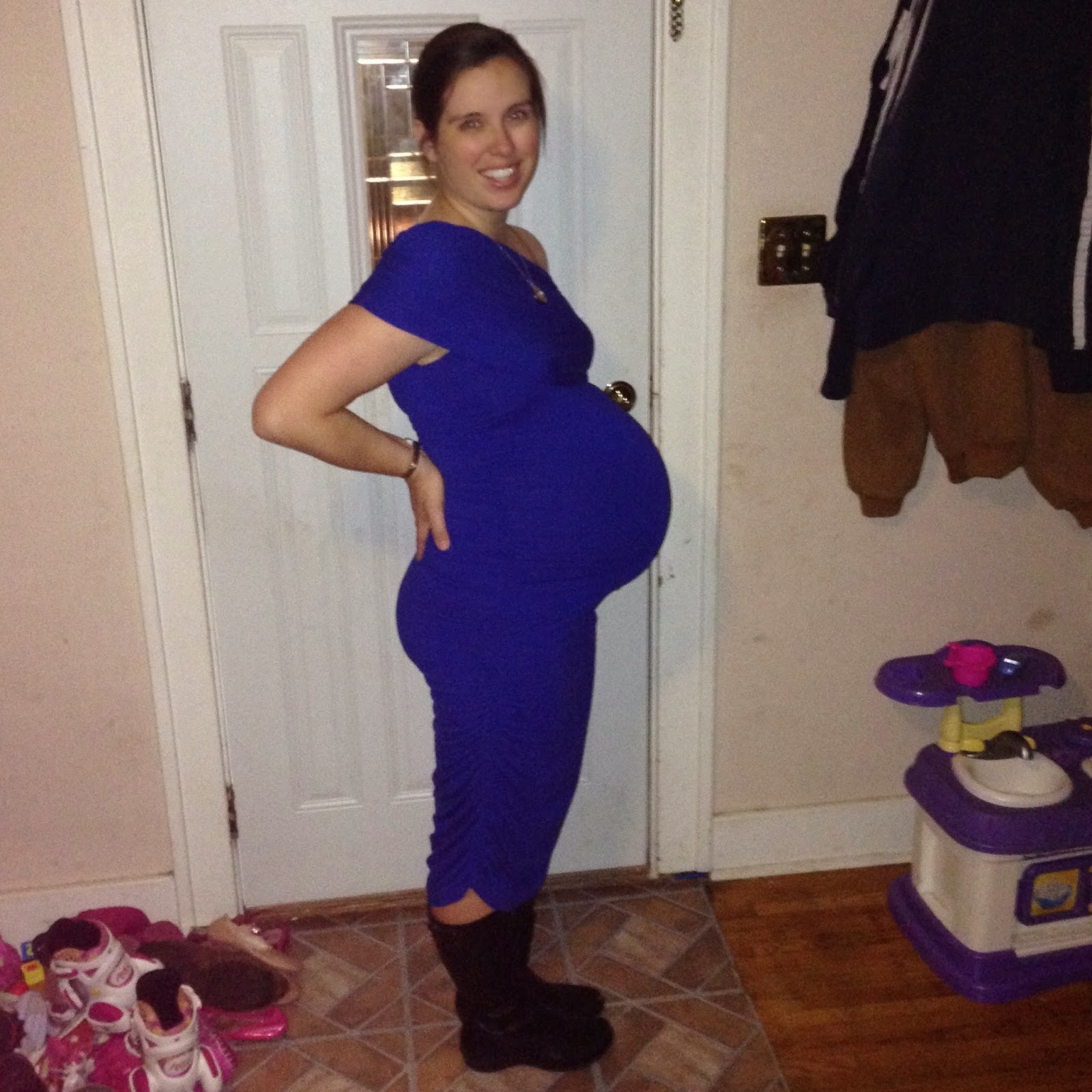 I feel like I'm the opposite of many pregnant/postpartum women.

When I was pregnant I felt like I could barely get out of bed.  I had so many things that I wanted to do, but for the last two pregnancies I never got that burst of energy.  I hated cooking/baking/cleaning/moving... things that I normally actually enjoy.

As soon as I got home after James was born that changed.  I loved cooking and baking again.  The urge to clean and organize was back.  And that burst of energy that never arrived while pregnant seemed to arrive as soon as he was born.

I just hope the super burst of energy lasts through my reorganization plans!

And for a little extra awesome-ness, here's our little mermaid showing off how well she gets around in her mermaid tail (she loves being on camera!):