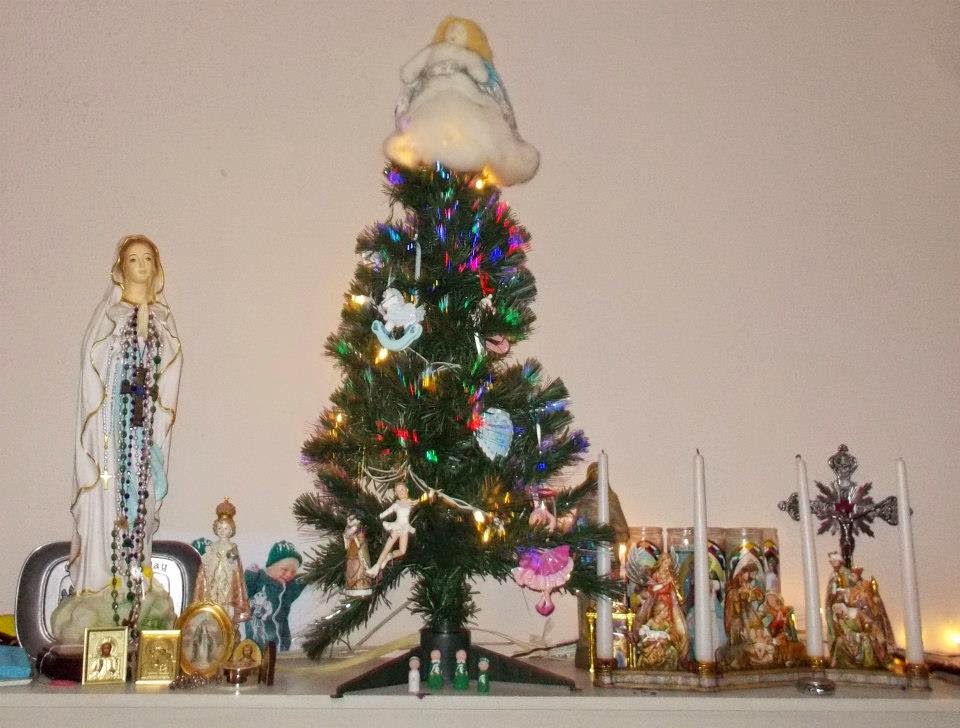 Let me pause to blame the multiple mini floods in our basement these last few years for the fact that I have to search at all.  The boxes were organized.  They were lined up along the walls with their contents labeled on the outside.  And then there was water and I was desperately moving them from one side of the room to the other.  Then the water backed up from the other side and there was more frantic box moving.  Now after several more floods and a pregnancy and a baby, the box room is simply chaotic.

Before entering it to even look for something it's good to ask for Saint Anthony to say a prayer for you because that's pretty much the only way anyone is finding anything.

Organizing that room (again) somewhere near the middle of my-things-I'd-really-like-to-do list, which means I may or may not get to it before we move, which is an event that is likely quite some ways off... but finding our decorations had been bumped up to the top of the list by Sadie's passion for all-things-Christmas.

Like my oldest, I love Christmas decorations.  I really do.  And in the past I've loved decorating the tree and seeing the looks on their little faces when they came downstairs and found the living room transformed.

But there's a catch... namely our destructo-children.

When you have a child who takes any vertical surface as a personal challenge to attempt to scale it, having a Christmas tree presents a unique challenge.  In fact, having anything on the walls presents a challenge.  Any picture that remains up on my walls is up simply because a certain someone hasn't been interested in finding a way to scale that particular part of the wall to get them down... because if she wanted to, she could.

The lights are just as tempting as the tree, with their siren song of brightness.  And then there are the ornaments.  Mae is in love with small things that fit in her hand and many ornaments match that description perfectly.

So Christmas decorations are a challenge.  And I'm puzzling over exactly how to approach this challenge this year.  To begin with we have five Christmas trees of various sizes in our house.

Okay, so none of them are ideal.  In fact, they kind of take tacky (or maybe kitschy) to a whole new level.  But it's what I have to work with.

Maybe (hopefully) next year I'll have the energy/creativity to get a real tree and find a way to make it strong enough to withstand the attentions of a certain middle child and her accomplice, but this year I don't see that happening (and honestly, I have no idea how it could work.  This child has accidentally snapped metal legs off of a space heater... a tree would just be too appealing and even on our best day without any intention of hurting it I can't see it lasting... It could be suspended from the ceiling and reinforced with steel and I'm afraid it still wouldn't survive the holiday... unless they sell titanium Christmas trees...).

I started this post talking about how I had plans for tonight... those plans are still in exactly the same state they began in when I started to try to clean at 7 o'clock.  That happens to be the same time that James decided that he had other plans for the night that involved me holding him while he stared into my eyes and cooed and smiled and frowned at me grumpily when I tried to sing to him (unlike Sadie he cannot say in his most politely embarrassed voice "Mommy.  Please.  Stop.  Singing.").

I'm fairly certain that the period of time that followed his waking was by far the longest he'd ever managed to stay awake in his entire two months of life.  He'd drift off and I'd try to put him down and his little eyes would snap open and he'd scream in outrage.
Usually he falls asleep on his own in his bassinet without a sound.  Tonight he was determined to have quality time with Mommy.

And so I shelved my plans.  After all, how could I resist this face:

Until he finally went to sleep and I started writing this post.

Tomorrow I'll pick up where I left off and see if I can come up with a Sadie approved Christmas display in our living room... with all the fiber optic awesomeness that our little Christmas trees contain.
Posted by Cammie Diane at 11:15 PM