Tonight after the babies went to bed Sadie and Paul helped me decorate the living room.  Sadie carefully decorated the little Christmas trees and danced around holding the lighted garland that I strung around the top of the walls and gasped every time I plugged in another string of lights. We decided to use the little Christmas trees this year after finding a tiny blue tree to add to the lineup so that each of the kids still has their own... which means we've avoided the issue of Mae climbing the Christmas tree for one more year.  Hopefully. 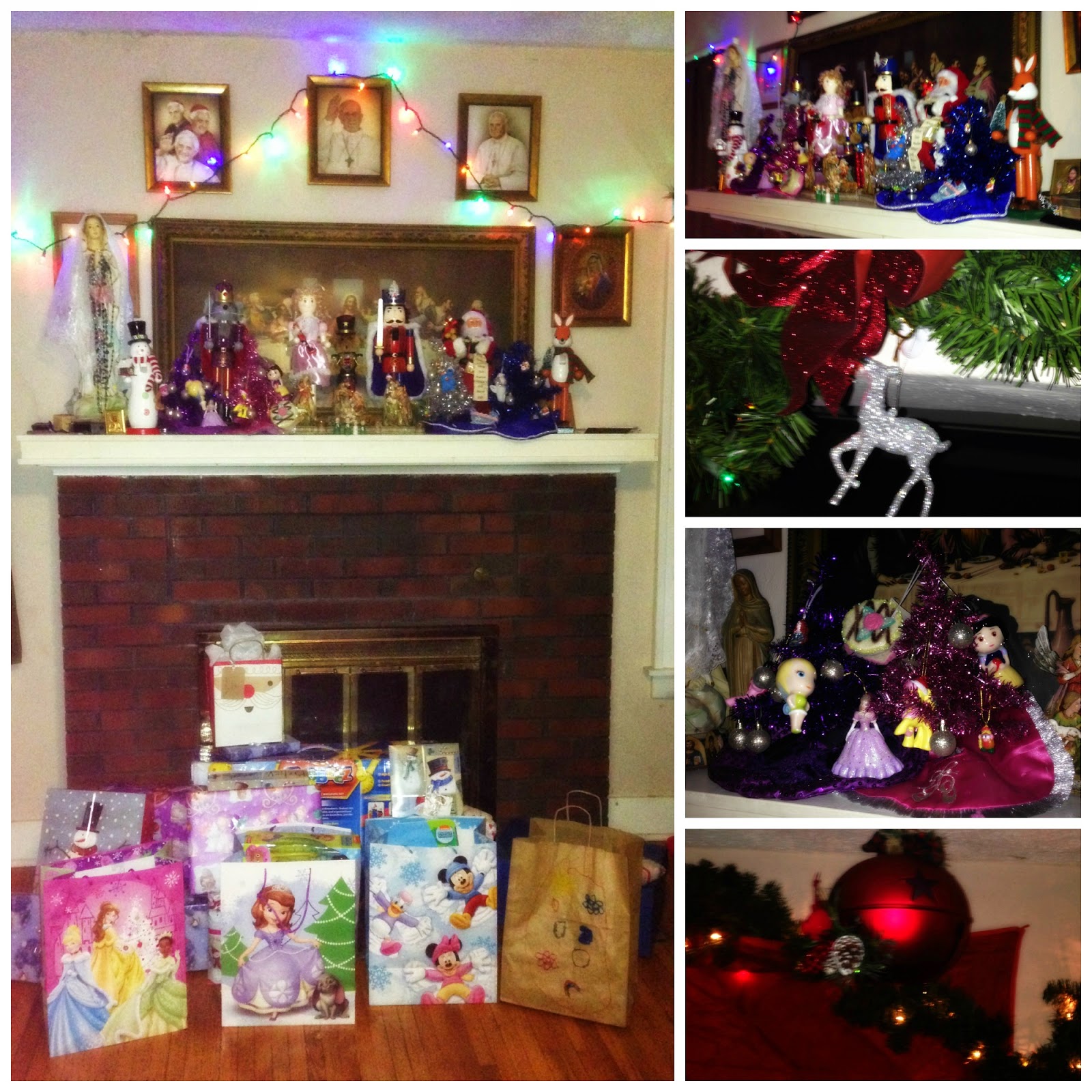 At the start of Advent I had big plans for having another homemade holiday.  For the past few years most of our birthdays and Christmases have relied almost completely on homemade princess dress and dolls and I thought we'd do it again.  And with the shops closing I thought it would be pretty easy to do, since I'd have more time.

But I underestimated how much necessity had motivated me in the past... and how nice it was to sleep a little bit more and not stay up until the wee hours of the morning sewing (which James wasn't a fan of anyways).  So I started thinking of other options.

There are two ideas I've heard suggested when buying Christmas presents for children.  One is to get three presents, to represent the three presents that baby Jesus received from the Wise Men.  The other is a little rhythm that says "One want and one need, one to wear and one to read."

I didn't quite do either of the gift buying plans, but I kept them in mind while I was shopping and we decided to get each of the kids one toy (or in Sadie's case a necklace that she desperately wanted and had gone on and on and on about), a pair of pajamas, an outfit and a book (with the exception of James since we have hundreds of board books in this house and I'm desperate to have less of them rather than more).

So the final gifts that were wrapped up tonight after Sadie went to bed.  And here's a sneak preview of what they'll find in the morning. 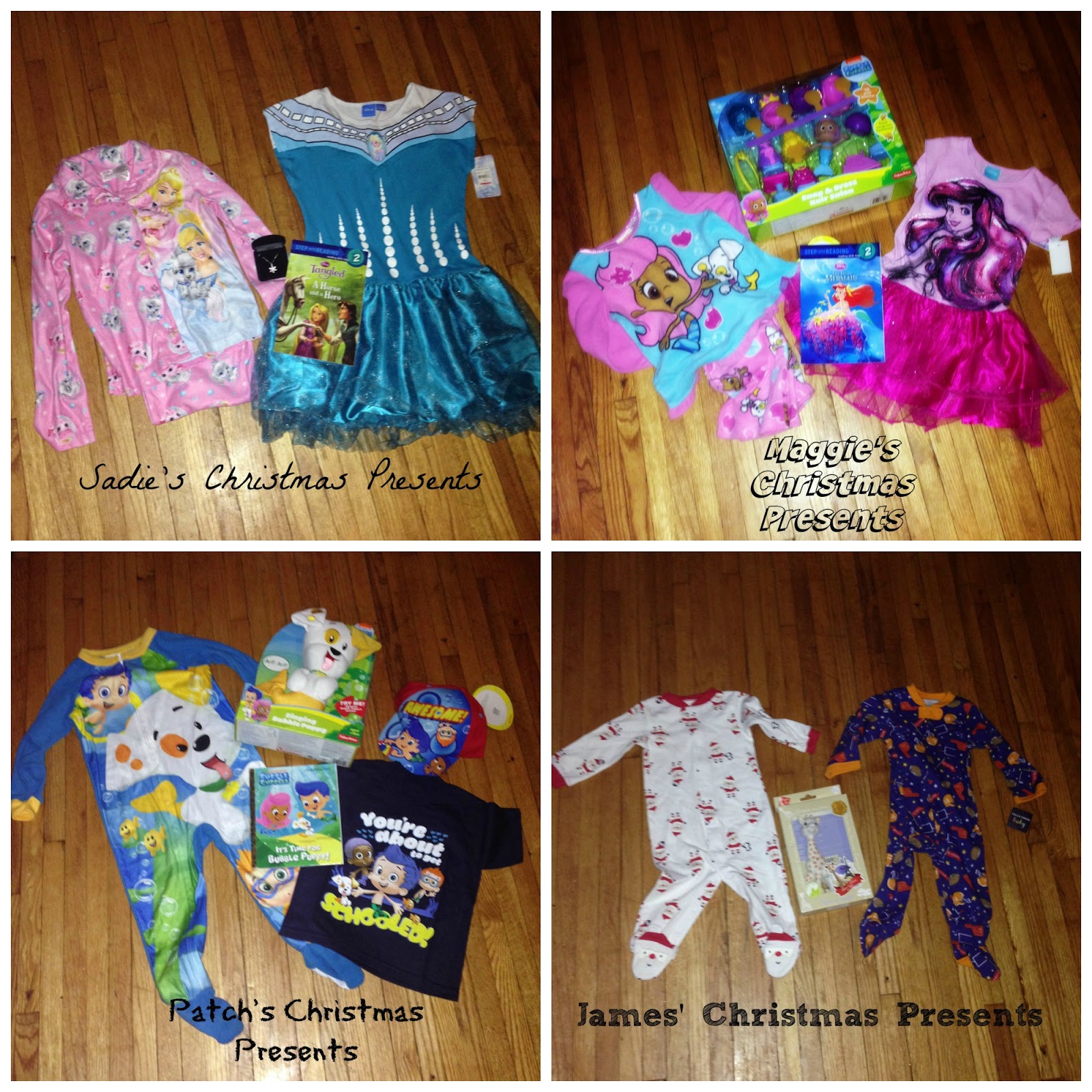 Can you tell that Patch is a little bit crazy about Bubble Guppies right now?  And that he desperately wants a puppy?  Hopefully a stuffed barking Bubble Puppy helps him with that particular wish.

And because, in the past, I've had a tendency to go a little overboard with Christmas presents.  Sadie's first Christmas is the perfect example of that tendency: 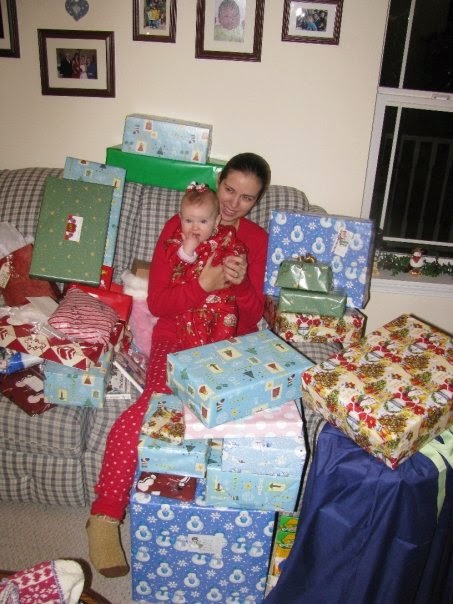 Those were all for Sadie.  It was... over the top.

And so this past few years reeling in the material side of Christmas and really focusing on why we're celebrating has been a tremendous blessing for our family.  Although it was fun to actually go shopping this time and find one toy that I knew that each of them would really enjoy playing with!

Tomorrow will be a stay-at-home Christmas.  Patch and Mae have both had the flu for several days and Sadie and I haven't been feeling 100% either (although compared to those two we're great) and so we'll be resting and hoping that this virus passes through the house quickly.

Now to get a little sleep before Christmas arrive in 33 minutes!

Have a Merry Christmas!
Posted by Cammie Diane at 11:34 PM

Email ThisBlogThis!Share to TwitterShare to FacebookShare to Pinterest
Labels: Christmas