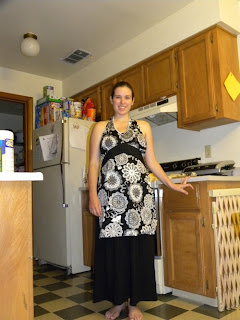 Today was a tough day. It must be that fun post-baby-hormone-dip that I was too exhausted to really feel last time around rearing it's ugly head. I spent the second half of Mass sobbing silently in the front row of our parish. It took a massive amount of self control to keep from saying "thank you for being so kind and charitable today" to the mean 80-something year old woman behind us after she'd yell/whispered (did you know you could yell and whisper at the same time?) during the liturgy of the Eucharist at us, because Sadie wasn't completely silent today (which she is nearly 90% of the time when we're at Mass).
I had so many people come up and say kind things after Mass, but I was in the sort of place where kind words only made me burst back into tears and want to crawl under a rock. It wasn't the greatest start to the day and it brought on a full out migraine by the time that we got home (that the hydrocordone I'm on for the incision didn't even touch... although I've noticed that hydrocordone just doesn't work on my migraines at all). Still, when the headache finally did go away with the help of a coke and an ice pack and a quiet, snugly baby (Sadie was out playing in her little plastic pool with Nani and Grumpa) I was able to do one of my newly favorite things!
Cooking a bunch of food to freeze.
Doing anything with my hands, from woodworking to quilting, to knitting and crocheting, just helps calm me down and slicing and dicing and stirring is no different. So, despite the rough start, now, at almost midnight (when I should be asleep!) I'm feeling pretty good. Here's today's recipe: 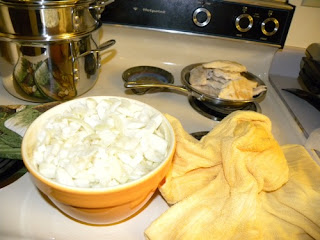 In a large saucepan, bring the water and the bulgur to a boil. Stir, turn the heat off, and cover with a lid. Let the bulgur sit for 10 minutes. Drain the excess water and set aside. Meanwhile, sauté onions and garlic in olive oil until tender. Add onion mixture to bulgur. Mix in chicken and season with salt and pepper. Serve hot. 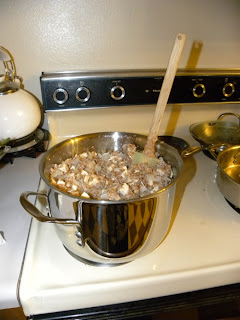 I originally saw this recipe in a free healthy cook book I'd been given, but I changed it so much that it doesn't have very much in common with the original recipe. This recipe has a lot more onion and chicken (and garlic) than the original. And the garlic salt is completely my addition too (I love garlic salt a little too much!).
I had never had bulgur until I tried this recipe last month and it's quickly become a family favorite. I love that it's healthy, inexpensive and that I can make it last for so many meals. Today's recipe easily made enough for four dinner's at our house and I'm hopeful that we'll have leftovers because in the past when I've made smaller batches the leftovers have lasted for an extra two meals, making this recipe very cost effective (Sadie may be a little tired of it after we had bulgur for dinner one night, lunch the next day and breakfast the third day!).
Now I need to get some sleep. My eyes won't stay open!
Posted by Cammie Diane at 2:24 AM

Email ThisBlogThis!Share to TwitterShare to FacebookShare to Pinterest
Labels: Freezer Cooking, Living on a Little, recipes