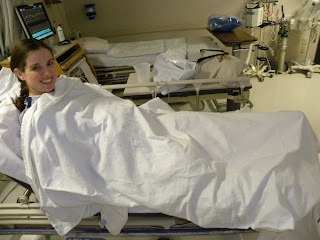 Margaret Rosella (aka “Maggie Rose”) was born on July 4th, 2010 at 9:04am. She weighed 9 lbs 1.3 oz and was 21 inches long. She is currently napping in her Moses basket, while her big sister is napping upstairs in her big girl bed (and Daddy is napping too!). I can’t believe that everyone is asleep at the same time!

After one trip to the hospital on July 3rd, I really thought I was going to make it to my scheduled c-section on the 7th. Then the contractions started. I began to track them a little after eight, and around midnight I was starting to get frustrated, because I wasn’t really sure what I should do… The contractions were very strong (and very painful) but they were holding steady at between 6 and 8 minutes apart, and I’d just gone over the fact with the nurse that we weren’t supposed to go to the hospital until they were 3-5 minutes apart earlier in the day.

However, I was having a hard time seeing the point of waiting. Why wait and go through hours and hours of labor, when they were going to do a c-section when I got to the hospital? So a little after midnight I called Nani and asked her to come over and watch Sadie and when she got there I put in a call to my OB.

I was very, very relieved when Dr. R said to go right into the hospital to get checked out.

Over the course of the hour-long car ride I had time to wonder if they would send me straight home. The contractions held steady at 8-9 minutes apart and while they didn’t seem to be stopping, they weren’t close enough to assure I wouldn’t be told to “come back later.”

We arrived at the hospital a little before two and were taken to the surgery recovery room, because all of the labor and delivery rooms were full. A quick check showed that I had dilated another 1 ½ centimeters since the earlier trip and the baby had moved down one position. Since the hospital is so set against VBACs this was enough to ensure that they wanted me to stay. 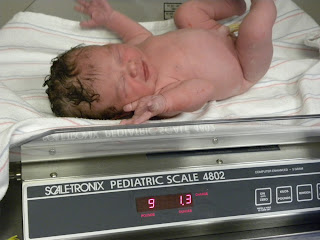 My doctor’s verdict on what would happen next came over the phone. She told the RN to inject me with some drug (that started with a T) that would stop the contractions. She would come in the next morning (the Fourth!) and do the section. At that point the words “stop of the contractions” made me pretty happy.

Ten minutes later that’s exactly what happened. Unfortunately the side effect of the drug was to increase my heart rate to super speeds and there was really no way to sleep feeling like I’d just drank ten large Mountain Dews. So I waited and waited and finally, around fell asleep around 5 a.m. after being moved to another room (they were out of comfortable chairs so Paul finally took a blanket and pillow and fell asleep on the floor).

When I woke up two hours later a new nurse was there and the verdict on what would happen next had changed slightly. She said that the doctor might inject me with more of the contraction stopping drug and send me home (NOOOOOOOOOOO!!!!!!!!). I was not excited about that idea.

However another check showed that despite the fact that I’d had no contractions that I could feel I’d dilated to 4cm and the water bag was actually pressing out several inches and felt (according to the RN) as if it were about to burst.

This changed everything quickly. Apparently it meant that there was no way I was being sent home and everyone was a little nervous when I asked if I could walk the five feet to use the rest room before they put the IV in and began pumping me full of medication. The RN’s warning before I attempted the walk was that any movement could break my water and that she thought that if it broke we would be doing a VBAC before the doctor was able to make it in (she lived about a half hour away and was already driving).

I made it to the bathroom and back and a whirlwind surgery prep followed. 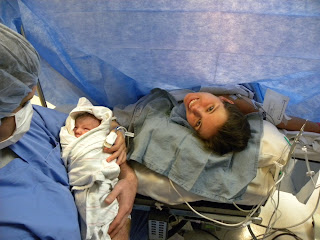 Then it was time for the part I was truly dreading. The spinal. Because of my back problems I’d had four epidurals before I ever gave birth to a baby. Add that to the epidural that got pulled out when I was in labor last time and I’d had five epidurals and a spinal going in to this c-section. So I’m a little wary of needles going anywhere near my spine, especially when the process involves me having to arch my back so that they can stick a needle in it!

I have to admit, it’s a pretty illogical fear, because actually getting the spinal isn’t that bad. It’s just the idea of it that scares me so much! Once that was over it was smooth sailing. Paul was called in to the operating room and a little while later Margaret Rosella was born. Paul was less than an ounce off on his estimation of her weight (so he got the weight guessing prize and the due date prize!).

This time the c-section experience was very different! I really didn’t realize that there was such a difference between an emergency c-section and a scheduled one! This time was so much easier on my body and I was able to pass on the morphine the first day and only ended up saying yes twice when they asked me if I wanted hydrocordone (and one of those times was because they’d forgotten to bring the ibuprofen that I had been taking during the night and so I’d gone a while without anything).

I was released a day early from the hospital and this morning (three days after the c-section) Paul and I got up and took the girls on a little two mile walk through town. On day three after Sadie’s birth I could hardly walk!

And that, in a little over a thousand words, sums up Maggie’s birth story. Now Maggie’s personality, which is so incredibly different from her big sister’s definitely deserves a post of it’s own!
Posted by Cammie Diane at 11:28 PM