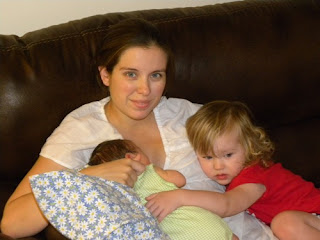 I wrote this post for my blog over at Our365, where they just asked me to be a featured blogger! Of course this blog is my baby and is my every day blog, but it'll be fun coming up with weekly posts about being a mom! And this is a topic I'm very excited about:

I am a little in love with my new discovery. I never thought that it would happen. In fact, if you’d told me that I would even consider using cloth diapers two years ago when I was stocking up on disposables for Baby #1 I would have laughed. It didn’t even seem like something that I would be vaguely interested in trying.

After reading a lot of blog posts by cloth diapering moms I was curious (I was especially influenced by Delta Flute and MK on this subject!). The bloggers I read really seemed thrilled with the way cloth diapers worked, they weren’t sending huge bags of diapers to landfills and they didn’t have to pay ridiculous prices for disposable diapers on a weekly basis. And frankly, the idea of buying diapers for two was not appealing. I’m not sure how much longer my older daughter is going to be in Pull-Ups, but I think we still have a few more months (at the very least).

A couple of months ago I began researching. I asked moms on forums what they used and which folds worked the best. And then after comparing prices on a half dozen different sites I placed a few orders. 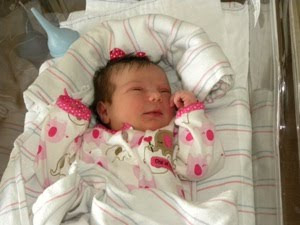 I ordered two dozen pre-fold cotton cloth diapers and a half dozen flat diapers (just to see how the flat diapers worked). I ordered a couple dozen fleece liners for the pre-folds. Next I added two Snappi’s (that hold the diapers closed) and six diaper covers.

When the orders arrived I went to work. I reviewed the sites that showed the folds and re-read every cloth diapering thread on the forums that I could find. And then I watched You-Tube.

If only we had taken pictures of what followed. A week and a half ago I sat in the middle of the living room every night for almost a week, surrounded by my washed and dried diapers. Sadie’s Curious George doll sat in front of me and my computer was nearby. Step by step I followed the videos and written instructions. And little by little, each night, I got a little bit better at making sure George’s diaper was snug and positioned correctly.

I tried out a cloth diaper as soon as we got home from the hospital. The first one felt a little clumsy as Maggie squirmed and I tried to make the diaper stay in place. The second one was still awkward. But by the fourth it had started to get easier, and now, on day three of cloth diapering I am thrilled. I can put a cloth diaper on Maggie as quickly as I can put a disposable on and so far I really do like them better than the disposables (and it’s not just the price, although that’s great too!). After having Maggie blow through a half dozen disposable diapers during her first few days of life, the last three days have gone much more smoothly. The cloth diapers have contained everything! We haven’t had a single leak!

I still plan on using disposables now and then. I bring a few when we leave the house, mostly because they’re less bulky and my diaper bag is already full. But using one or two disposable diapers a day is way easier on my pocket book than using eight or nine.

I’m not going to know what to do with myself when Sadie’s out of diapers and I’m not making weekly trips to the diaper aisle!
Posted by Cammie Diane at 1:19 AM