Sleep Deprived? Not this time!

I don't know why I'm so sleepy right now! I could blame it on these two: 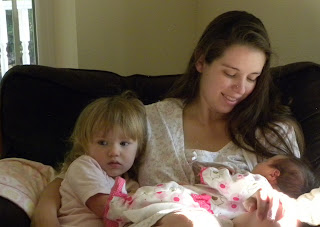 ...but to be honest, Maggie is already a champion sleeper for her age and Sadie actually slept through the night last night. 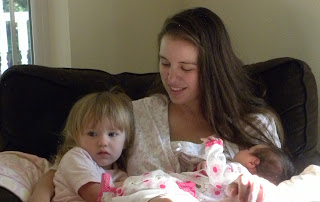 I have to admit, while I might be a little bit "tired" it in no way compares with the exhaustion I felt last time around. I really had no idea that two babies could be so different this early on! But looking back I could already see the signs of these differences when they were in the womb.
Before Sadie was born I could hardly sleep. She was up all night twisting and turning and kicking. And every night around 2am she would hold a four hour party that involved drumming on my bladder and doing backflips.
Maggie hardly moved at night. I would have worried if there had ever been any variation, but she was always quite and I got used to relatively easy nights (as easy as can be when your pregnant anyways).
Once outside the differences have remained.
Sadie was born with a desire to nurse. Constantly. She demanded marathon feeding sessions and one particularly memorable session lasted seven hours. She took breaks from nursing to be burped and changed, but then she latched right back on and drank away.
This would have been tough enough during the day, but since she didn't feel the need to sleep at night, it meant twenty four hours of an hour of nursing with half an hour off for several months.
While I knew that Sadie nursed "a lot" I also kind of thought that all babies were like that.
Fast forward to the present: Maggie slept quite a bit her first night (and I had even refused the morphine that I needed with Sadie). She woke up every two hours and then capped off the night by sleeping for four consecutive hours while I was already awake and was starting to worry that she hadn't woken up to feed.
The pediatrician at the hospital assured me that I didn't need to wake her up to eat if she slept for a long stretch, although my OB laughed when I said that Maggie was sleeping well and told me not to get used to it.
But I am starting to get used to it. A pattern has started to develop. We go to sleep and Maggie sleeps until sometime between two and four. Then she wakes up desperately hungry and spends an hour or two eating ravenously. After that she goes back to sleep and sleeps until sometime around seven (even though it's hard for anyone in our home to sleep past six, which is the time by which Sadie thinks that everyone in the house should be up and watching Cars). All of this means I'm getting more sleep (consistently) than I got in the first 18 months of Sadie's life (she was still nursing hourly at night when I night weaned her in January at 18 months).
I'm still a little amazed by Maggie's schedule, but I'm definitely not tempted to wake her up to get her to eat a little something either. Maybe I'll actually have a baby who sleeps through the night before she's two this time around... or maybe even before she's one... Dare to dream!
Posted by Cammie Diane at 1:33 AM