7 Quick Takes Friday: Emergency Appointments, Spinning Rooms and a Book You Should Read 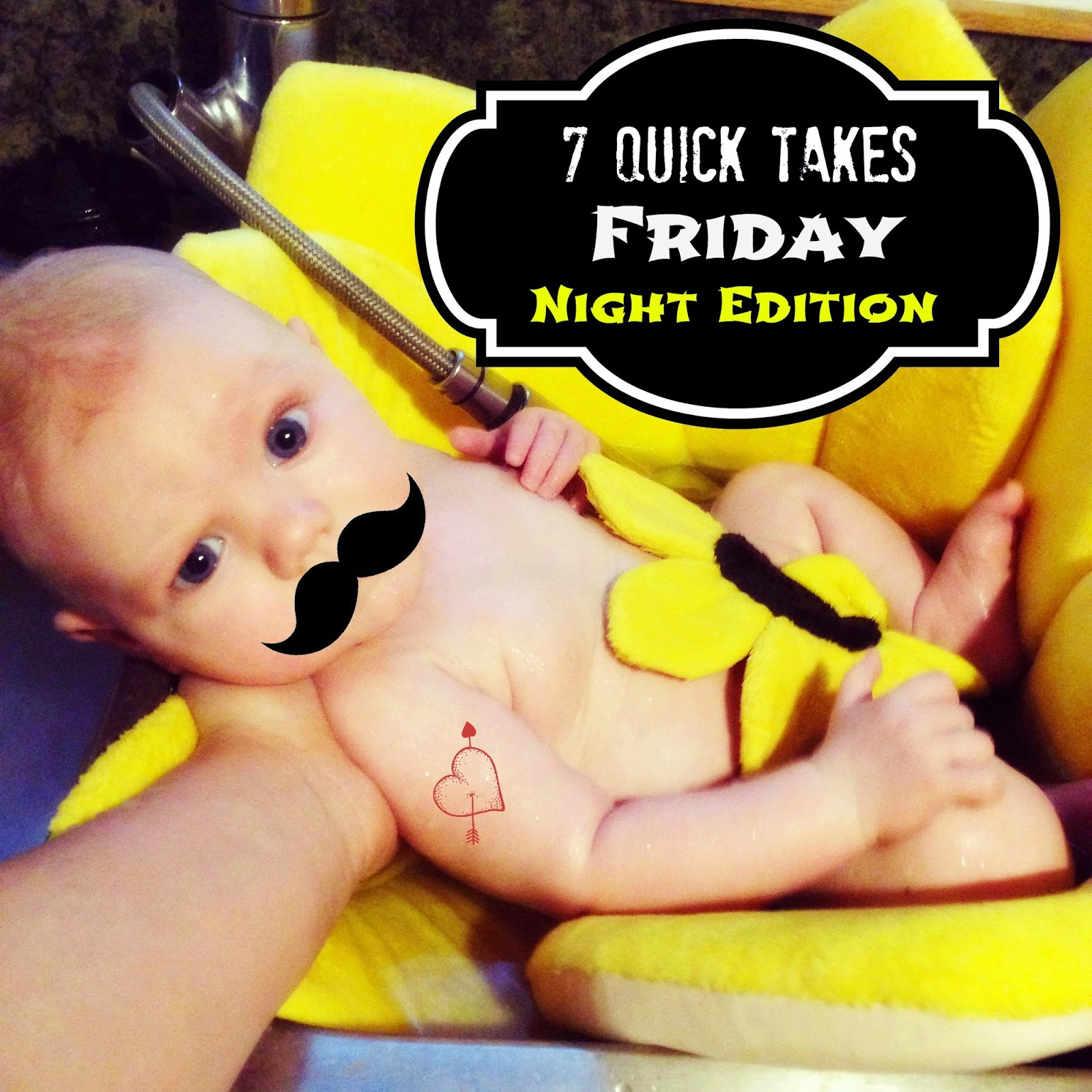 James' Godmother, Jacqueline, wrote a book and this week it became available on Amazon!  If you haven't read Jacqueline's blog yet click right on over to Journey Narrative.  She's pretty awesome.

After reading her blog for the last couple years I knew that any book that she penned would be worth reading, and so I made my order on the day the book was released and yesterday, while the kids clamored around me and climbed on me, I read the entire thing, cover to cover.

Now I absolutely I am planning to write a review, but for the time being let me just say that Jacqueline's story,  Her Eyes Are Blue: The Journey of a Special Needs Mother

,  is a must read and needs to be on your reading list. 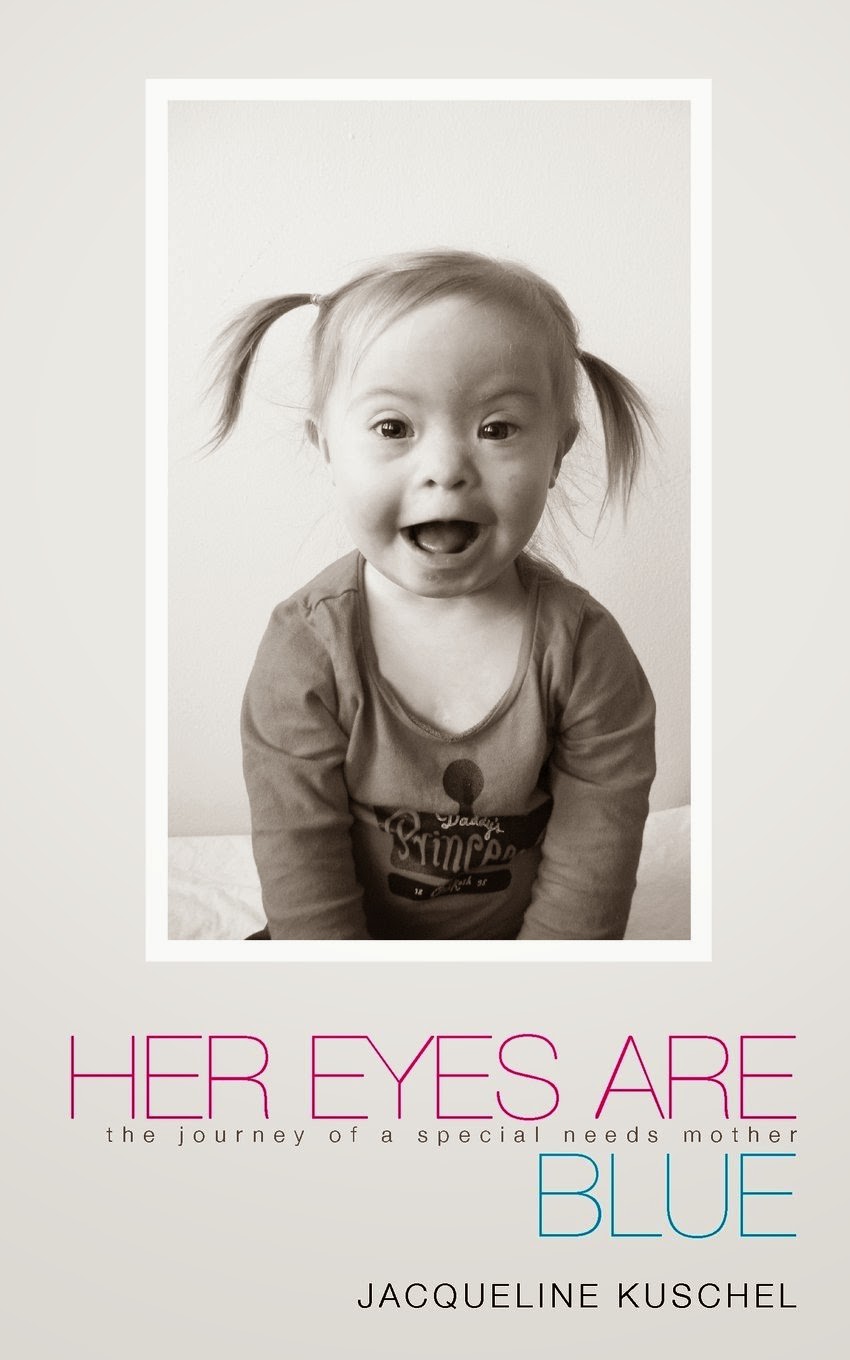 When Maggie saw what I was reading she came over and insisted on looking at the cover for several minutes and when I said "That's Abigail.  Remember Abigail?  You guys played together." she said "A-ge-ga-yo!" twice (which is huge!) and then said "girl" a few times too, while smiling at the picture.

And I just had to add that because in the midst of a kind of tough day it totally brightened my mood.

So today was pretty much one of those days where I run around, on the verge of freaking out, all day long.  Or maybe it was a week where I do that.

It's the sort of week where I've had to say "I'm really sorry to be calling you again..." when I had to call one of the nurse's at our pediatrician's office, yet again.

I was told to call back if it happened again and a few hours later I was back on the phone as I handed her two allergy melts (I'm so thankful they're enough).

Yesterday I spent the day playing phone tag cancelling/rescheduling (and then canceling again) therapy appointments for both girls, because of the stomach bug in the house.

After getting everything worked out mid-afternoon after several phone calls the child who had been doing better for several days was suddenly unable to keep down food again... so the appointments I'd moved had to be re-canceled.

Which leads us to today... 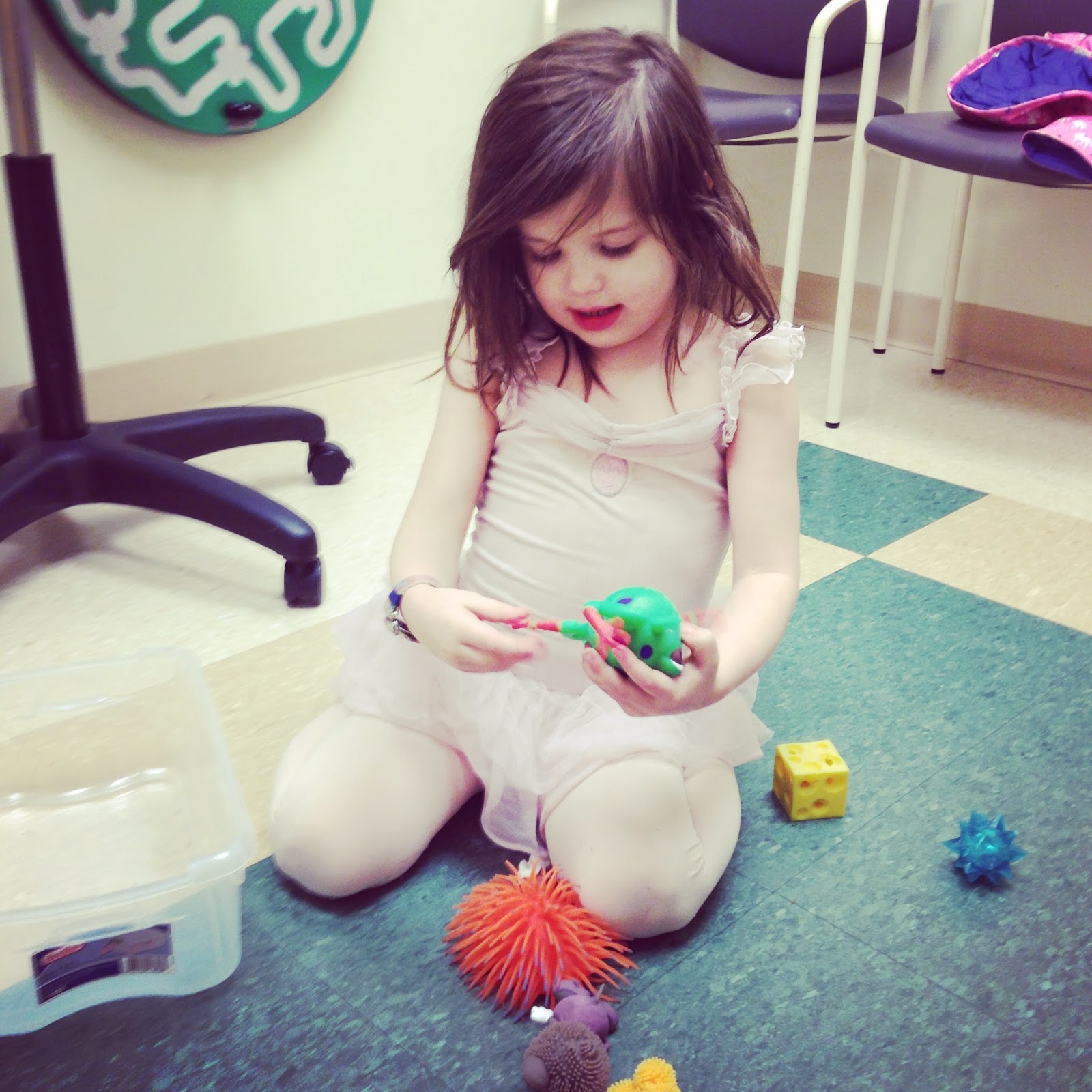 Today everyone seemed better.  Mae was super tired yesterday, but she hadn't had a fever in 24 hours.

And so today Mae went to the center for therapy.  When I picked her up one of her awesome therapists told me that something a little strange had happened.

There's a dark blue tunnel that Mae had been climbing in and laying in, in the playroom and when she crawled out of it her therapist noticed that one of Mae's eyes was completely dilated and the other was tiny.

When they returned to the same size they both were totally dilated, even though they were in a bright room.  She assured me that nothing had happened and I began to rack my brain trying to remember any time over the last week when Mae had hit her head.

I called Mae's doctor's office as soon as we got home and left a message with the nurses' line.  They called back immediately and said they wanted to see her.  By then I'd remembered that she had fallen off of a small toy box (about a foot off the ground) earlier this week, had cried for about a minute and had had a small bruise over her right eye.

That, combined with the fact that she'd been quiet and had been throwing up (which I'd just thought was the stomach virus, but was now worried was a concussion) meant I gathered up all four kids, loaded them back into the van and drove across town to pick up Paul from work (thankfully less than an hour early since he'd already arranged to take the kids during the ENG appointment).

Mae's doctor's office was awesome.  They took us to an exam room as soon as we got there and a medical student came in and got all the details of what had happened and then returned with the doctor (one I'd never met before) who was amazing with Mae.

The doctor explained that some people have slightly differently sized pupils and that sometimes the difference in size is more dramatic when the person is going from dark to light.

When we got out of the appointment I had 25 minutes to get across town to my ENT's office...

I made it to the ENT's office with a few minutes to spare before the ENG was scheduled to start.

After getting hooked up to a bunch of electrodes the test started.  The first part of the test involved following a little red dot on a screen with my eyes.  No problem there.

Part two involved sudden changes of position and being tilted backwards.  Before the low sodium diet, when the doctor had done the exact same thing, the room had spun.  This time it didn't bother me at all.

The last part of the test involved having cool and then hot air blown into each ear while my eyes were closed.  No big deal, right?

Nothing had happened during the other parts of the test and I couldn't imagine that a little bit of air would really do anything too dramatic if being tipped one way and another hand't done anything.

On the left ear it was kind of like being on the teacups at Disney World.  It wasn't that bad.


The right side was a different story.

It reminded me of Railroad Days when I was a kid and I convinced my mom to let me go on the Zipper when I was feeling particularly brave.

For those of you who don't remember the Zipper it was a carnival ride that goes up and down along a track that looks kind of like a zipper, while the individual car also spin around rapidly.  Like this:

So that was kind of surprising.

Now I just need to wait until next week to get the results.

I'm pulling together our schedule for second grade and today Sadie picked out one book to use in one of her elective classes.

The cooking craze is still in full force and when Sadie saw this book she was so excited.  She spent a major portion of her day sitting and going over each page over and over again: 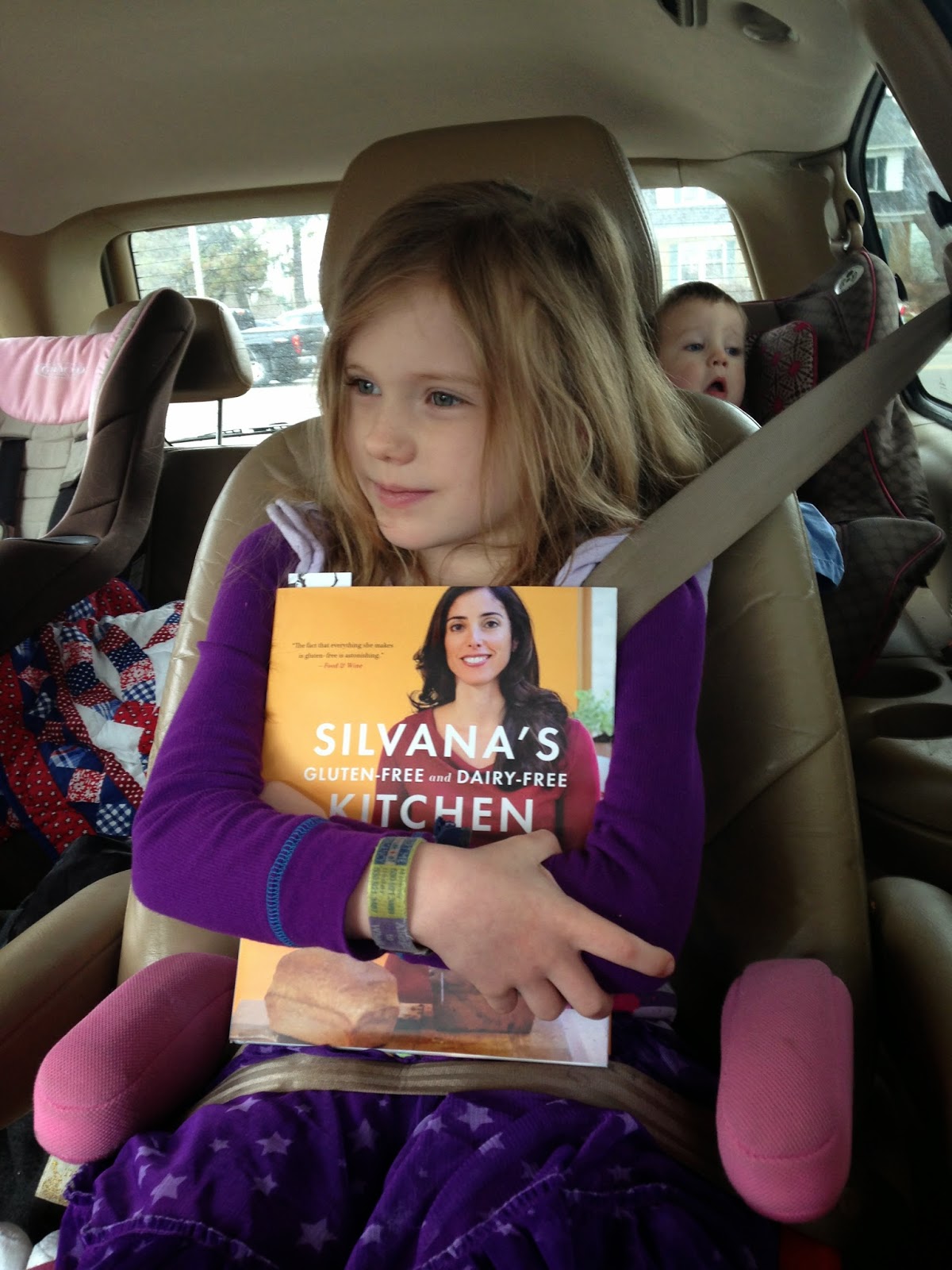 Her book mark is stuck between the picture and recipe for chocolate mint cookies.

Her goal is to make every single recipe in the book.

I hope they're all as good as they look.

Sadie has this week off from school, but she's been sitting down each day for about three hours on her own and doing her own little art projects.  The first day it was drawing flowers from her How to Draw Flowers book. 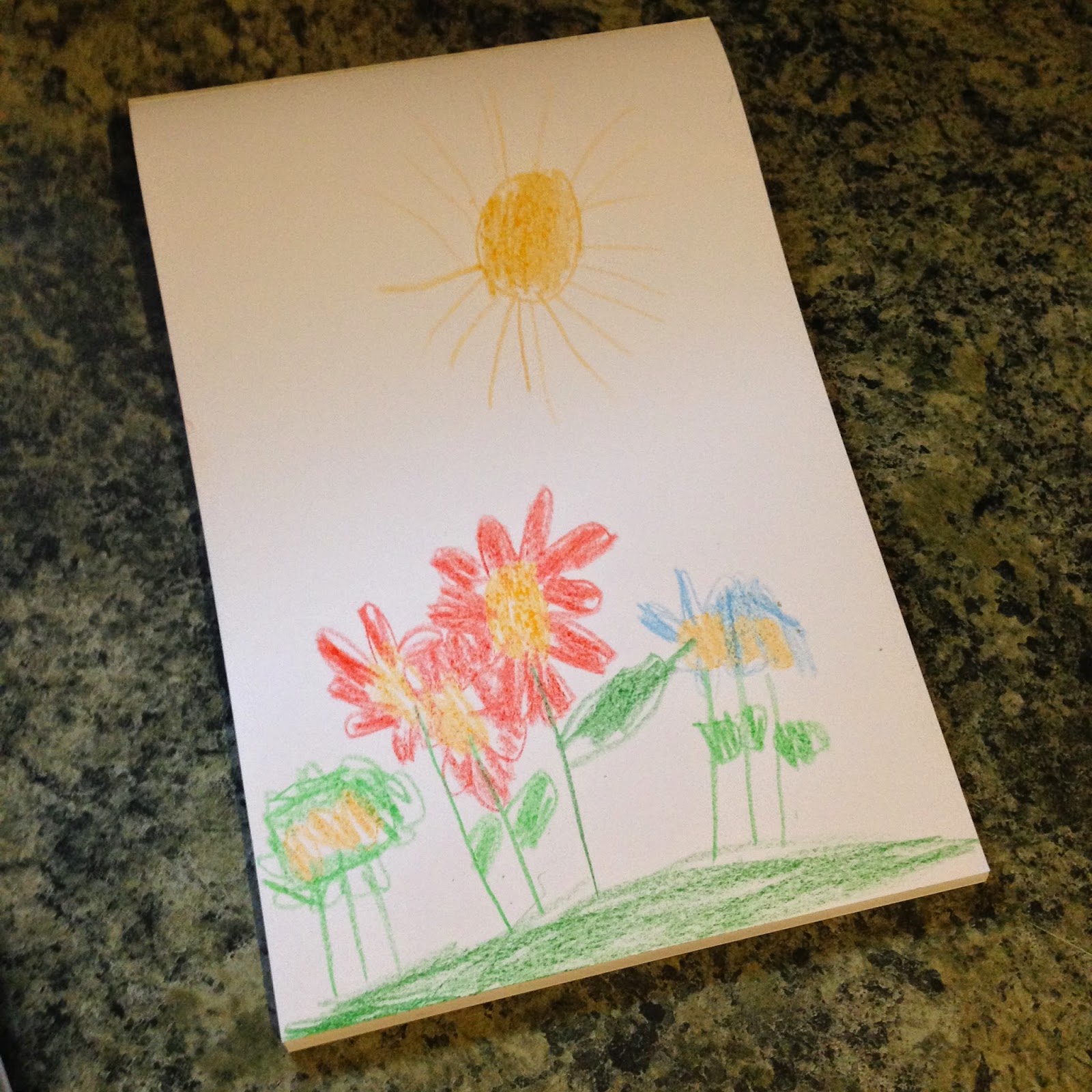 Then it was a day of drawing princesses: 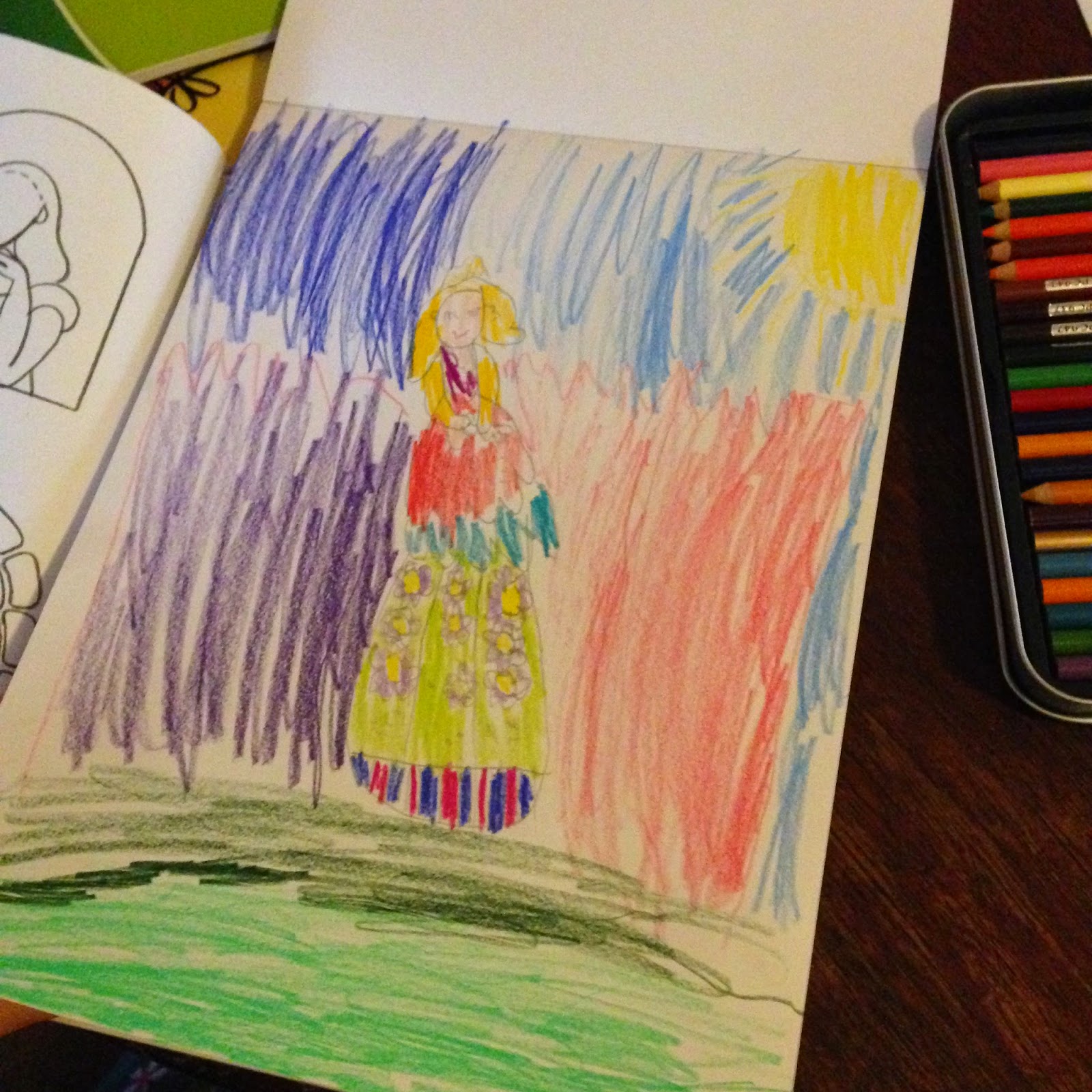 And finally it was a tea pot, which of course, led to a tea party the next day: 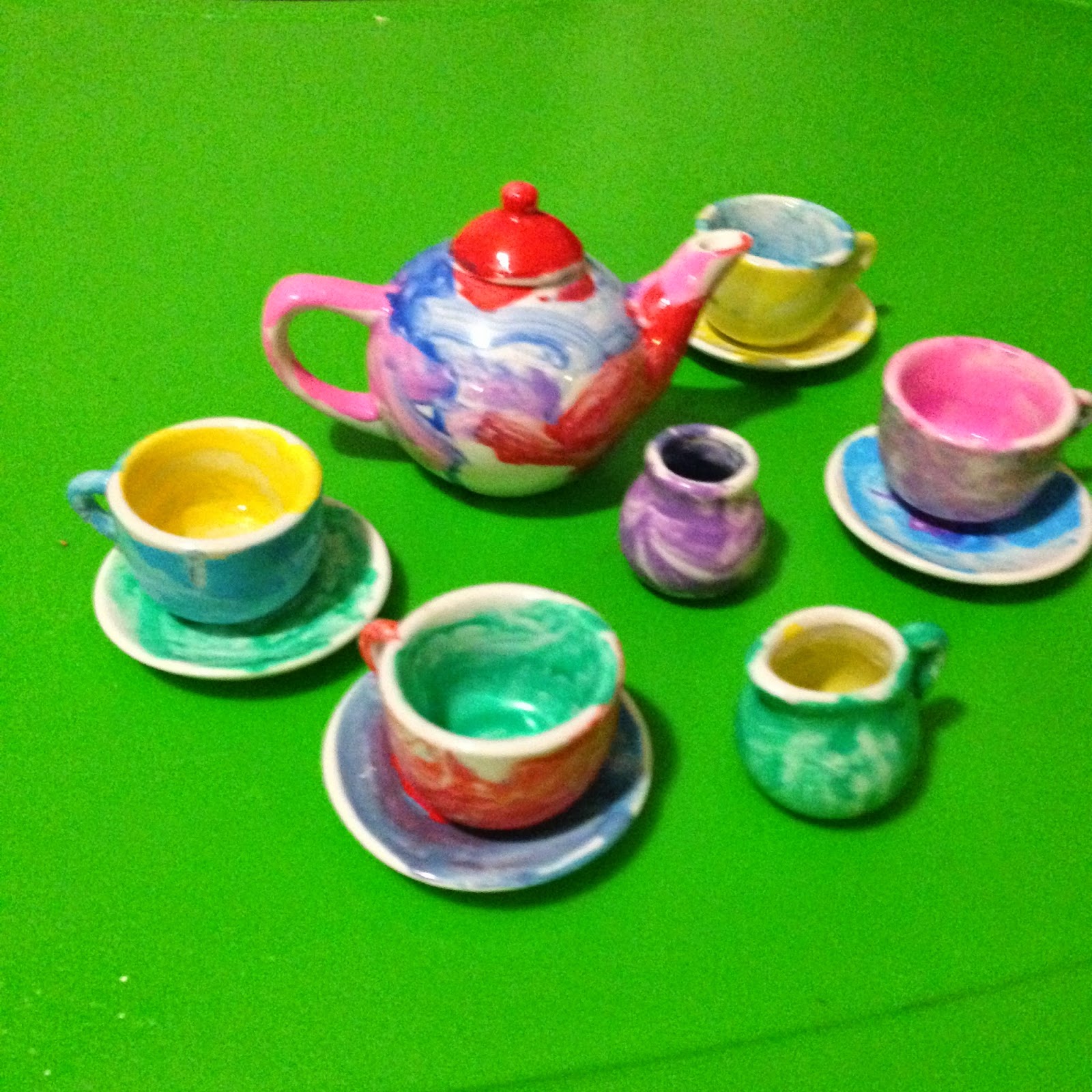 Tonight after running upstairs to do something I was greeted on my way back down the stairs by the sound of James laughing hysterically while Sadie said in a serious voice: "Well, it's not a laughing matter!"

When I asked her what they were talking about she said: "I was just doing a little speech therapy with him.  I'm trying to teach him how to say 'let.'  Let, James, l-l-let." 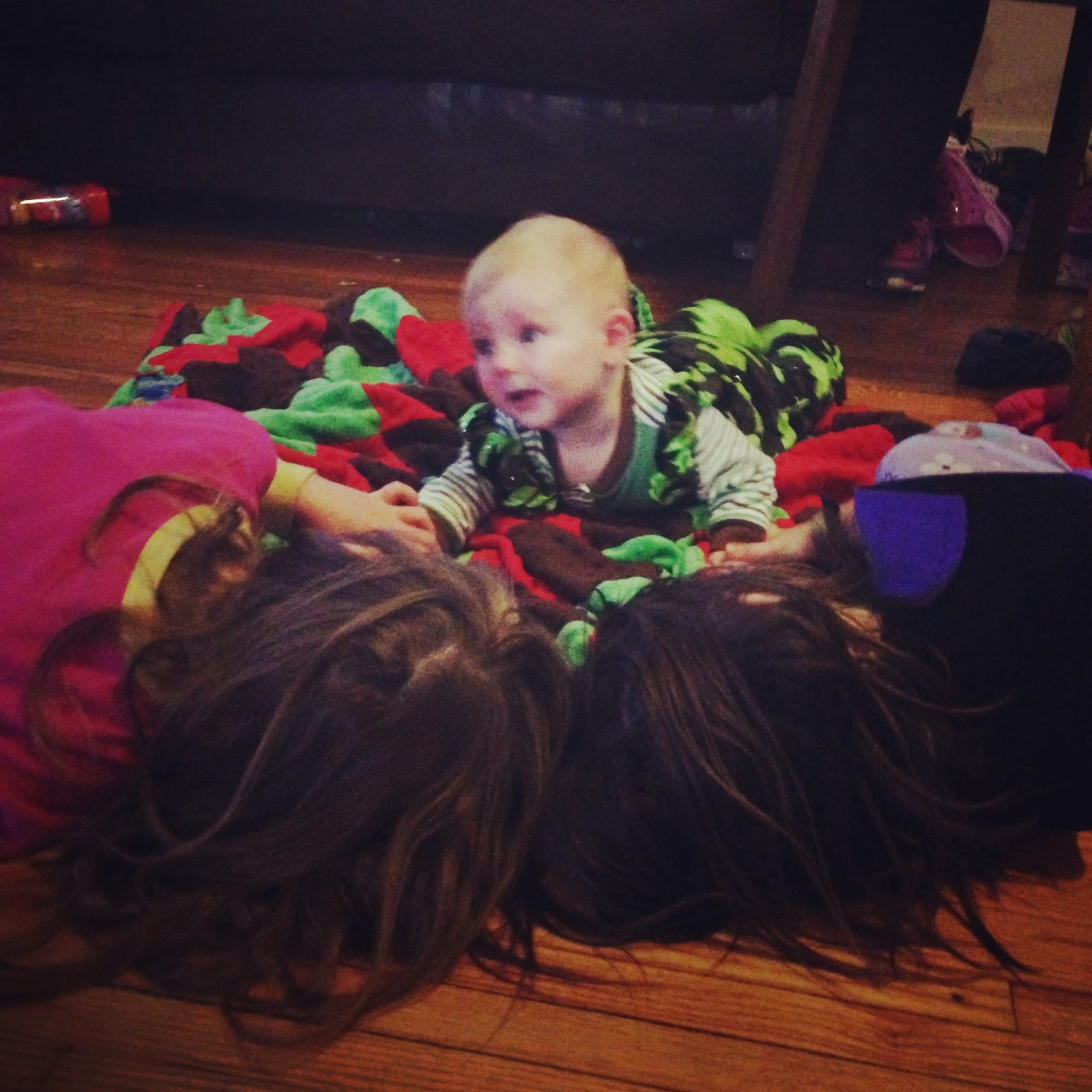 Maybe it's a good thing we had a couple days off of therapy this week!

For more Quick Takes head over to This Ain't the Lyseum!