An Unexpected Blessing at Easter Mass 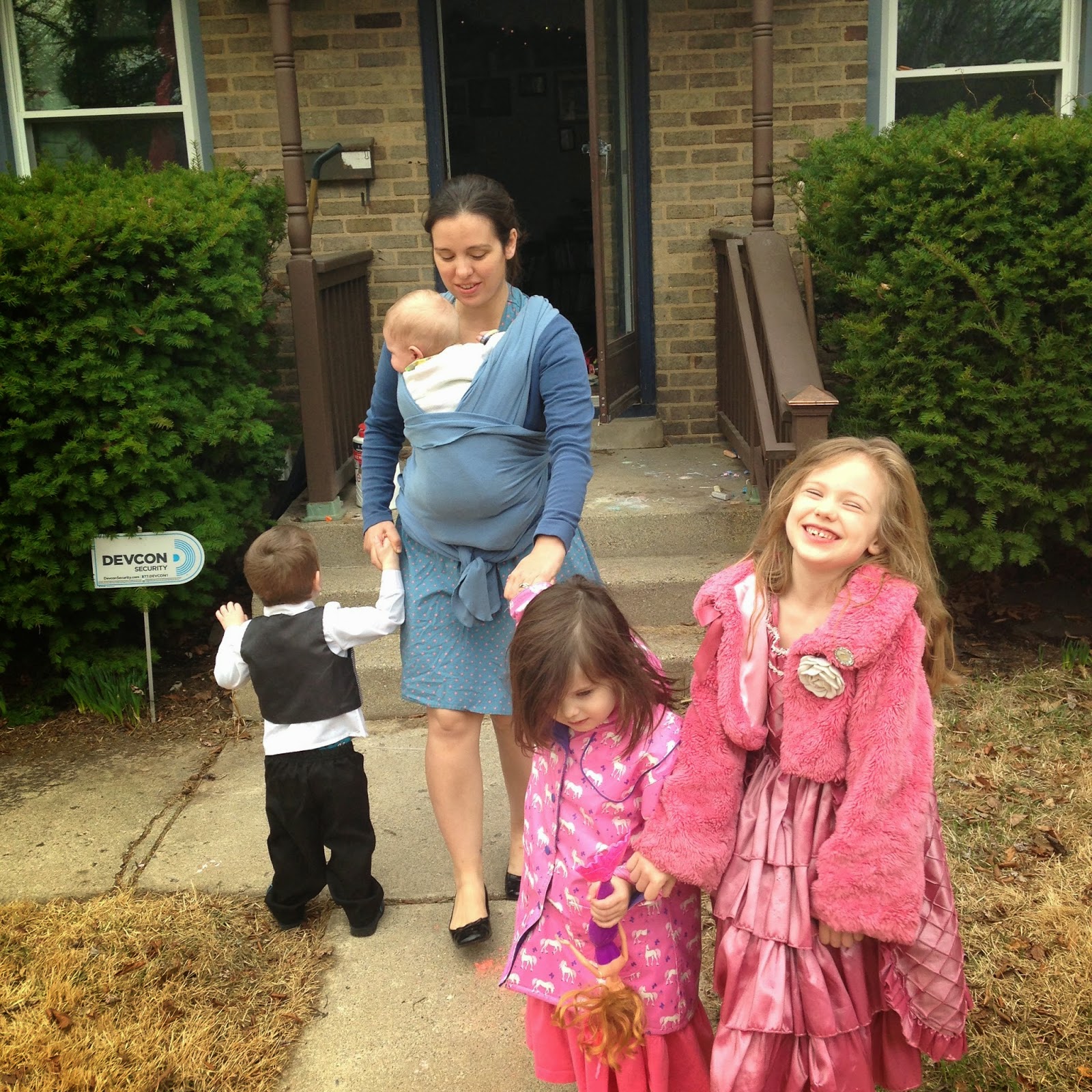 For parents of kids with certain special needs, Mass on Easter Sunday can be a special kind of challenge that may have them counting the minutes until they hear the closing blessing.  The crowds and the incense and the length of the Mass can be particularly overwhelming for those with sensory issues.

When we go to Mass I never know what to expect.  Will we make it to the closing blessing?  Will we even make it long enough to receive the Eucharist?  Or will we be hurrying a hysterically inconsolable child out during the homily?

The last happens rarely, and Mae genuinely seems excited to be at Mass most of the time, with her excited squeals being the main reason we hang out in the vestibule, behind the glass doors, only going forward for communion.

The vestibule was crowded by the time Mass started on Easter morning.  There were no seats left inside the Church and so as more people filed in it began to fill up.

Mae stays in her stroller because we've learned she's more comfortable and likely to be quiet in it, and I maneuvered her back and forth to try to get her a clear view through the glass doors as more and more people stood in front of her and to try to keep her away from offers of foods that she will be very sick if she even touches.  Finally I sank down next to her and held her hand as she giggled and clutched her mermaid doll in an embrace.

As a little boy walked in, who was maybe ten years old, I saw Mae's eyes fall on him and follow him as he walked across the room.  She doesn't usually pay much attention to older kids.  She loves babies and toddlers.  But this boy captured her attention and by the time he was halfway past us she had a giant smile on her face. 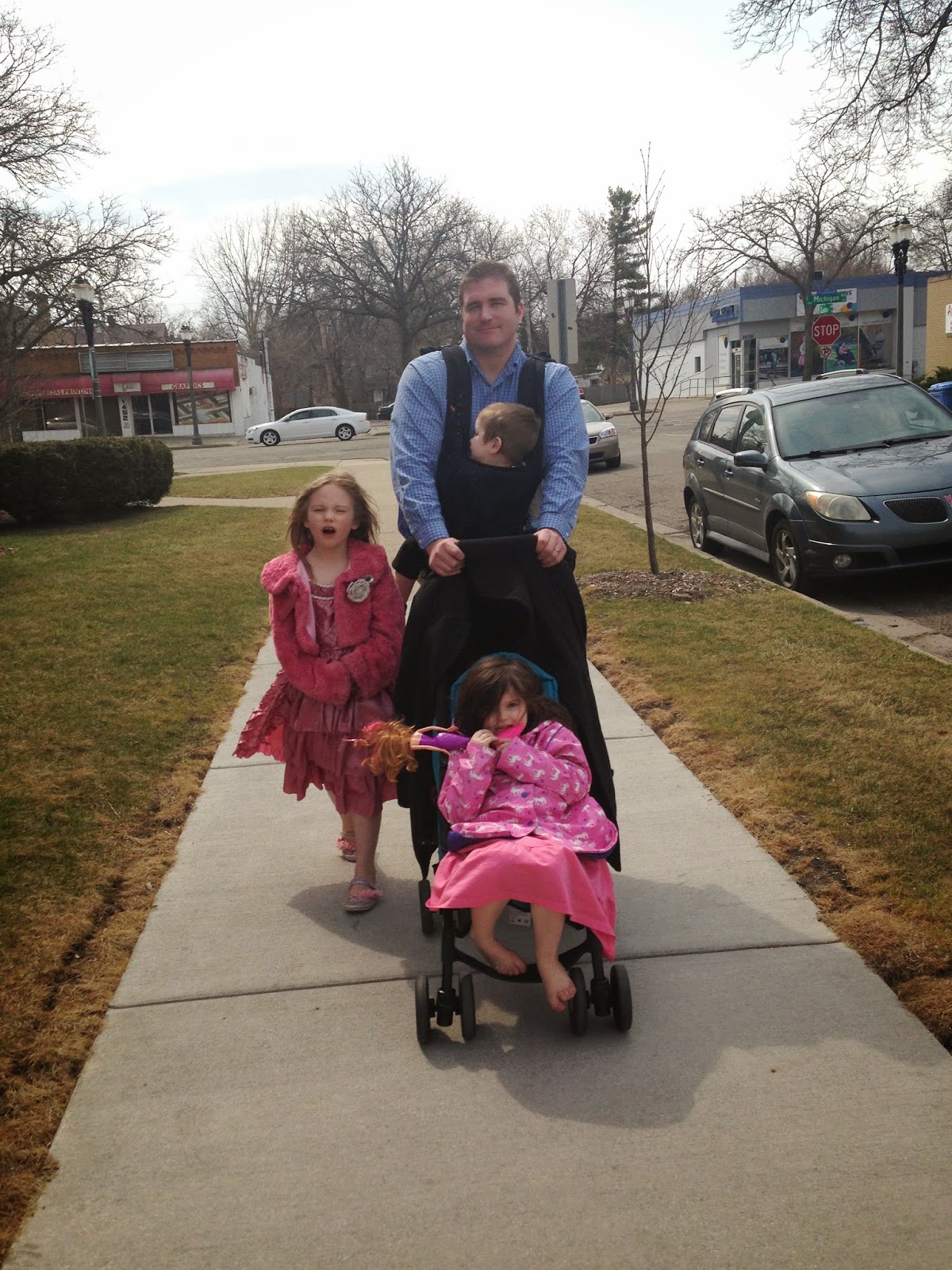 It was clear immediately that he also faced his own special challenges and he noticed Maggie right away and smiled back at her.  When he got too tired to stand any longer he came and sat on the ground next to us.  And when his mom arrived we smiled at each other, an understanding smile, before turning her attention back to Mass.

Then my attention was captured by Maggie reaching over repeatedly and trying to poke the woman standing next to us with her mermaid.  I was kind of surprised.  This wasn't typical Mae behavior.  She doesn't usually reach out to or bother people around us at all.

As I attempted to contain the mermaid doll, the woman, who Maggie was obviously drawn to, whispered to me that it was alright several times as she tended her toddler.  I noticed that she was watching Maggie with a smile on her face and finally she leaned over and whispered: "My nine year old daughter loved mermaids too.  She wouldn't talk and she wouldn't interact with other kids, but she loved mermaids.  And so when she went to swim lessons it was just so freeing, and then she would interact with people when she was in the water."

I smiled and whispered back, "she loves mermaids and the water too... so much..." and wondered if perhaps I'd just met another mom of another little mermaid loving girl on the spectrum who'd wanted to offer a little encouragement to someone closer to the beginning of a similar journey.

We made it all the way to the final blessing this Easter Sunday.  And I felt greatly blessed that we were able to receive this week, but I also felt that this particular Mass had been a sort of gift to see other families at other places in their own journeys, in a setting outside of waiting rooms.
Posted by Cammie Diane at 8:21 AM