A Patron Saint of Not Getting Pink Eye?

This morning I was driving Tessie to school and when I tried to take a left on the off ramp to go to her school there was a long line of cars all turning left to get on the freeway.

Because they didn't have a stop sign like I did, they all had the right of way.

Sometimes this can make for a very long wait. Today, it wasn't particularly bad, and it only meant a minute or two of waiting.

After ten seconds Tessie shrieked from the back seat and I glanced in the rear view mirror to see if she was alright.

Before I could even ask her brothers, who sit on either side of her, if anything had happened, she let me know exactly what was wrong by chanting "Go! Go! Go! Go!" in an urgent little voice. 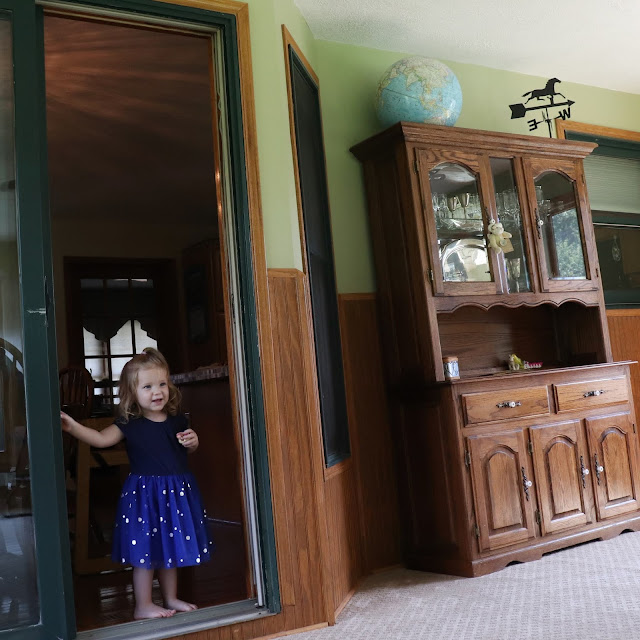 When Maggie was Tessie's age she used "Come on" as a catch all phrase to let me know what she wanted. I had never realized exactly how flexible "come on" was in expressing various wants and needs from "hurry up" to "I want that" to "come with me" to really basically anything, until Maggie began to use it that way when she was a little younger than Tessie is now.

Tessie uses "Go" in much the same way now.

It is especially appropriate when she's exercising her skills as a back seat driver. 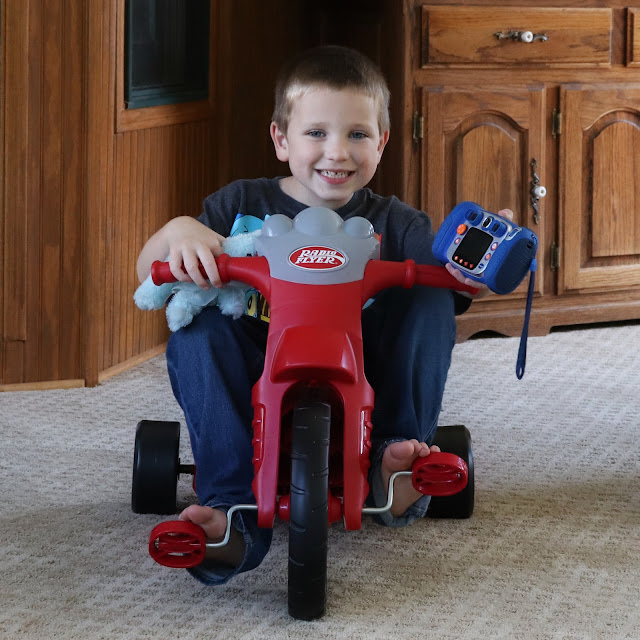 Meanwhile James likes to work part time as an actual backseat driver by telling me when he thinks I am going the wrong way.

"Mom, is this really the way to the park? Are you sure mom? Really? I thought it was that way?" Is not an uncommon refrain from the back seat. 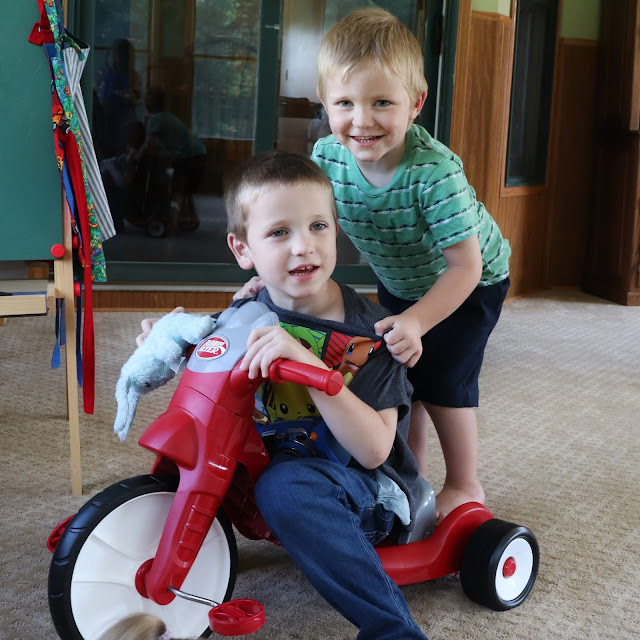 We got a call from the preschool yesterday that they have a spot for him in the full day program.

He's turning four and will be in the young five's kindergarten class next year, so this will be his only year of preschool.

Before this they only had a spot for him in the afternoon class, which meant quite a bit of extra driving (from Tessie's class to James' class and back, whereas now I have the option at least of staying in town after I drop Tessie off to save gas, or of coming back home).

He is extremely excited about the idea of getting on the bus with Sadie and Patrick on Monday morning to go to school. 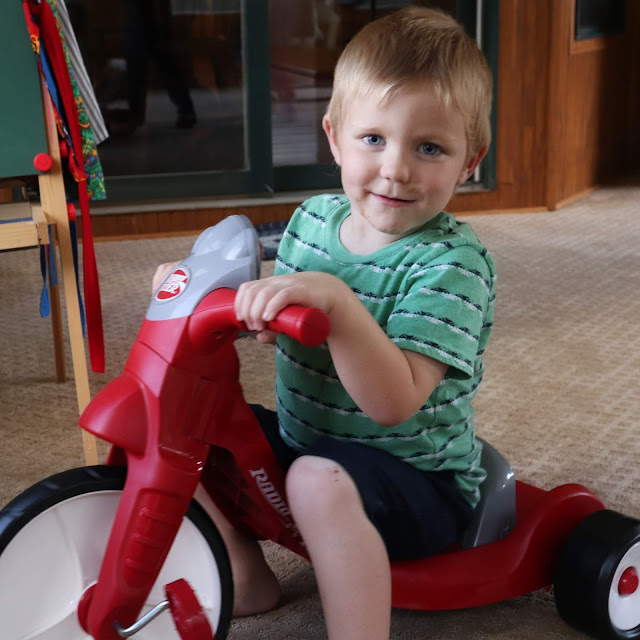 Patrick on the other hand has been home all week long.

I wasn't sure on Tuesday if he was really sick enough to miss school... but I kept him home, erring the side of caution since he did have a little fever.

Yesterday it became clear that it was a good thing we hadn't sent him because he not only has croup, with the scariest sounding cough I've ever heard (he has what the doctor called "stridor") but he also has "adenoviral pharyngoconjunctivitis," which caused me to look at the boy and say "did we not just have a conversation in the car on Sunday in which I told everyone that no kids are allowed to get pink eye this year?!?!?!" after the ten rounds of pink eye that went through our house last year!!!" 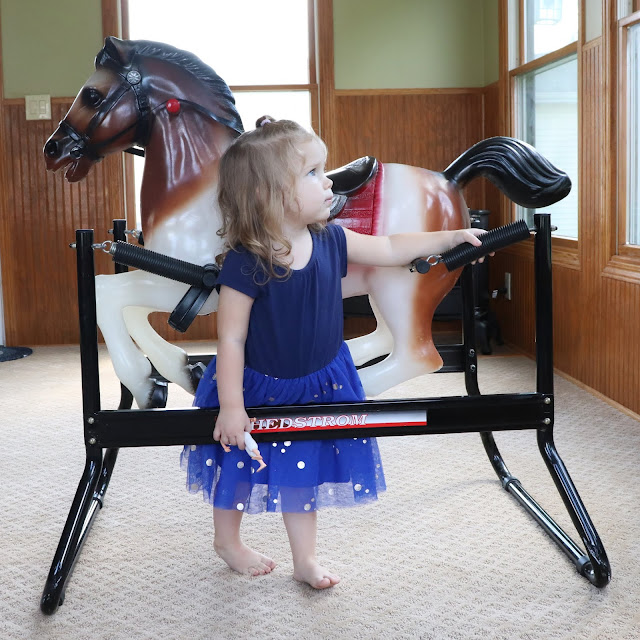 The doctor said it wasn't quite the same, because the conjunctivitis part is part of the entire other virus but that he would have everyone wash their hands a lot.

Basically, with a five, and three, and two year old, we're goners.

I cannot even tell you how much hand washing and hand sanitizing and bleaching and disinfecting went on last year, all day, every day... and there was still so much pink eye. 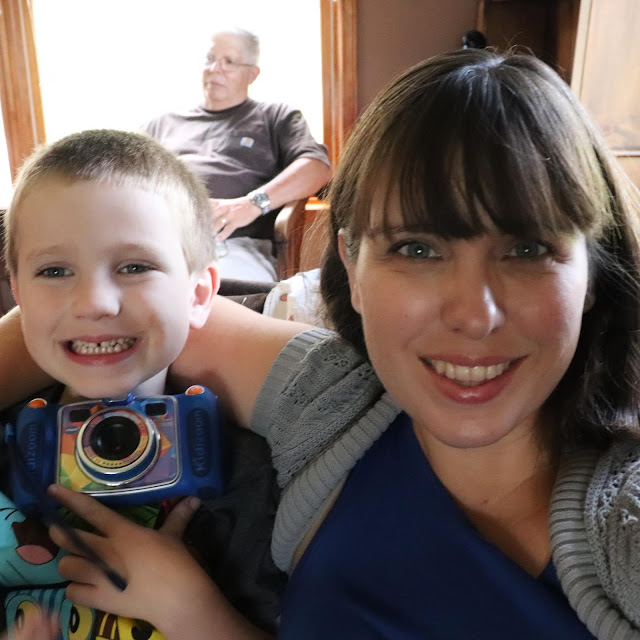 Is there a patron saint of not getting pink eye?

Because if there is I think that needs to be my patron saint for the 2018- 2019 school year. I need to get their medal and hang it about my neck, post their statue in a prominent place in my home and start saying novenas.

Let's face it, the hand washing thing did nothing for us last year.

Or maybe we would have had like twenty rounds of it instead of ten, without all that.

And in totally random news.... this took a very long time to make.

Sadie was very excited to show off her backpack and Maggie's backpack.

I made this video (or half of it) the night Tessie was admitted to the PICU. And midway through I had to stop and jump up and rush her the hospital and I finished it the next day when we got home and the life got busy and last night I finally finished editing it.

It's a little ridiculous in how excessive it is, but it was also kind of nice to see the kids spoiled after a couple years of uniforms: