A Sleep Study- But Not with the Kid You Think

First I want to start by thanking everyone who left kind and supportive comments or said a prayer yesterday or today. It means more to me than you guys know and I'm going to reply to each and every comment.

I've been brainstorming and thinking and I'm definitely feeling better today, and I have some ideas about how to move forward reaching those neighbors that we still haven't gotten ahold of yet. 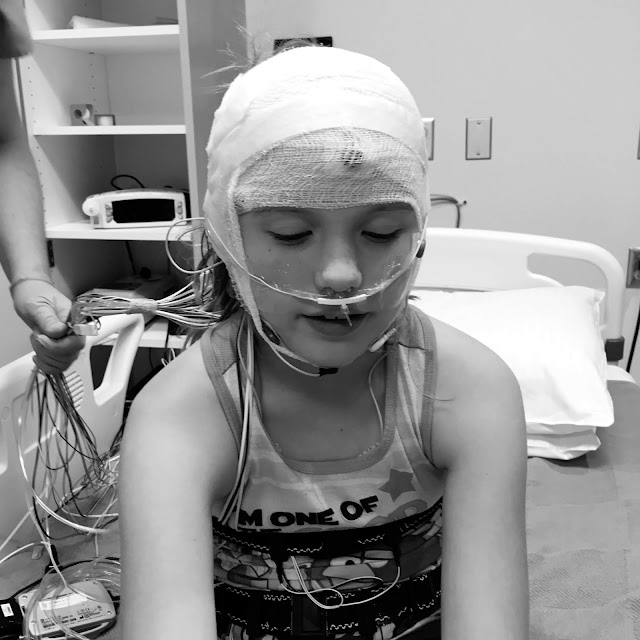 The last twenty four hours have been a little more hectic than I expected, because a certain 10 year old who spent Monday night with me at the Children's Hospital an hour and a half away, for a last minute scheduled sleep study, ended up coming down with a stomach bug this morning.

Because this child never, ever complains about being sick, even when she is horribly sick, I knew that when she said she had "a pretty bad stomach ache" to take it seriously and tell her she was not setting foot on the school bus, lest I receive a seriously bad phone call from the office later in the day.

She had a sleep study because her doctor decided that, if the insurance company was going to refuse to do the genetic test to see if she has the same gene mutations as Tessie, she could at least do a sleep study to see if she was in immediate danger from the sleep condition that Tessie has (when Sadie was little I told her doctor that she'd turned blue and stopped breathing and he told me I was a paranoid first time mother with a very pale child that probably just looked blue sometimes because of her paleness... so that, with the gene that she has a 25% chance of having, is also the reason for the concern).

So we ended up at the hospital and we haven't heard anything yet, which I think has to be somewhat good news, because if it was anything very bad we would have heard back yesterday (when they put Tessie on oxygen they called us the same day).