On Squirrels, Tears, and Clovers

The boys had soccer practice yesterday.

They had two rules that I explained carefully before they left the house, as I tied on their cleats,  on the front steps, instated after the Saturday game debacle of "he's copying me" and James' tears about coming out of the game or being in the game if his brother wasn't with him.

Number One, we listen to Coach, who is thankfully just about the kindest, most understanding kids' coach I've ever seen.

Number Two, we don't cry during soccer unless we actually have a reason to cry, like we're hurt and maybe bleeding and not because we have imagined that our brother is copying us because we're running and he's running too and that makes us really, really mad at him all of the sudden.

We'll see how followable those two rules end up being for the two young Wollner soccer players.

I'm just hoping we can avoid the Brothers Fighting on The Field Event, if it can be at all helped, that seems more likely to happen when you have two boys who are two years or less apart on the same team. Or in the same room. Or, you know, the same one mile radius. 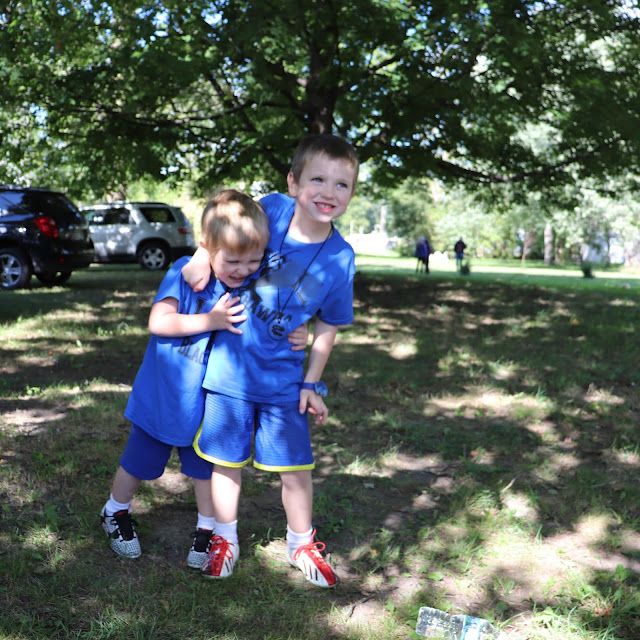 Yesterday the highlight of soccer practice came when there was a brief Boys vs Girls scrimmage. With three players on each side the girls brought the ball down the field.

Except the boys were seriously distracted by the clovers on the field, and did not notice the advancing team coming their way, and so the three girls, with the ball, managed to slip right on past them to the goal, without the boys so much as noticing what was going on.

And I couldn't help but think yup, those are my kids. Totally my kids. 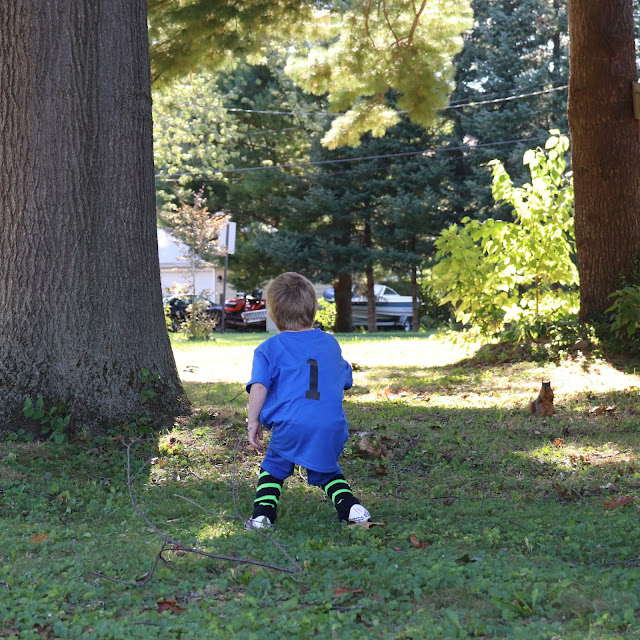 Maybe I need to have a no squirrel chasing rule during games too?

But the squirrel incident was after the "he's copying me" debacle and we were so glad that he was off the field and off to the side and distracted and not crying that we sort of let it slide, especially after his coach gave us the thumbs up that he was over with us and no longer sobbing about who knows what at that moment.

And he wasn't actually chasing it. He was trying to toss it acorns from a distance while being rightfully terrified because Sadie had already informed him that it was "riddled with disease."

Thank you ten year old sister for that.

Now for all things video related, we had an awesome day earlier in the week where I got a lot done, but the best part was that Maggie said so many words and was super cuddly.

And I loved that! Especially the cuddly part!