Tessie has a new word.

She has learned to finish whatever she's doing very quickly, usually a puzzle or game of some sort and when she does she slams down the last little piece in place and says "done!" to announce that she has finished her work and is ready to go and play.

One of her therapists told me about it earlier in the week and her speech therapist confirmed that she definitely said it during speech therapy after quickly putting together a puzzle.

I'm 99% sure that the "did it" is echolalia, or Tessie repeating something that she hears often (basically adults saying "you did it!" to her) but I'm still totally counting it.

I have to say that I'm rather proud of her rushing through her work to go play. Or at least I could relate to it.  It reminds me of my kindergarten report cards that informed my parents that I rushed through my work and wasn't at all careful at anything, so that I could be finished without whatever it was that we were doing and be the first one to go play.

When Tessie is at school she's asked to do about four things, that take about thirty seconds, in between playing. They are usually some of her favorite things, like stacking things, or putting together puzzles, or putting things in other things, which are all things she likes to do at home for fun.

Her OT and speech therapist visited her school a couple of weeks ago and told me that they were amazed when they watched her work because she was so speedy, which both surprises me a bit and not at all. 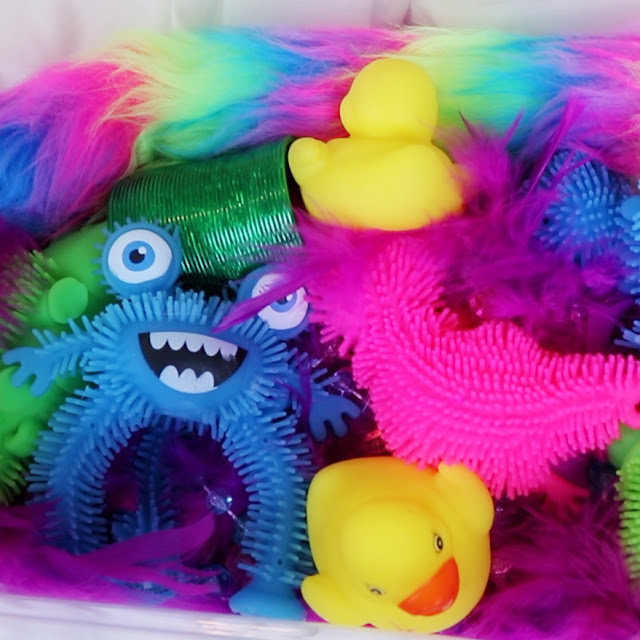 This weekend she suddenly decided she wanted to make eye contact with me. Constantly.

She kept catching my eye and grinning hugely.

It was brand new and shocking and amazing.

And she apparently also thought it was highly amusing because after locking eyes for a few moments she would giggle like she'd just heard the funniest joke. 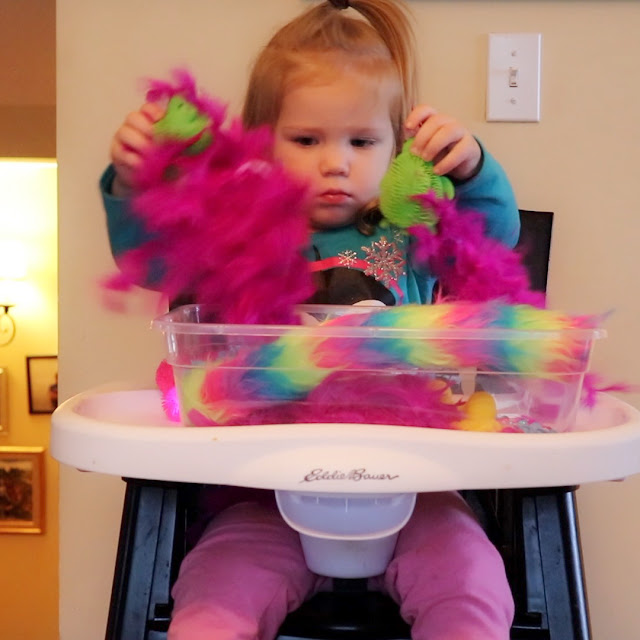 I was inspired by one of my favorite autism channels to make Tessie a sensory bin from Dollar Tree.

And while I knew there were a lot of neat sensory toys at Dollar Tree I did not expect it to be the smashing success that it was with every single one of our children.

They all loved it.

They all want one of their own now.

I think I have to hurry and make Patch one before his birthday in a few days because he was that excited when he saw Tessie's and played alongside her with it.

Even as an adult, I have to admit that when I was making ,it was a lot of fun!