Tessie and All The Awesome Things She's Doing

Earlier this week I watched as Tessie threw a ball to Sadie and then ran over to her sister and tackled her in a hug. After a few moments of cuddling she stood back up and ran a few steps away so that they could play catch again.

I frantically texted her therapist. "She's playing catch with her sister!!!!!"

I could hardly believe it as they passed the ball back and forth between the two of them, both missing it more often than not, but still thoroughly enjoying the game.

Then later in the week, Tessie, who knows that the word "Dance Party" means to move her body all around even if there isn't any music, because they have "practice parties" frequently to learn how to act at birthday parties and other social events, grabbed my hand and started to twirl around like a tiny ballerina, which was quite possibly the best part thing that happened all week long. 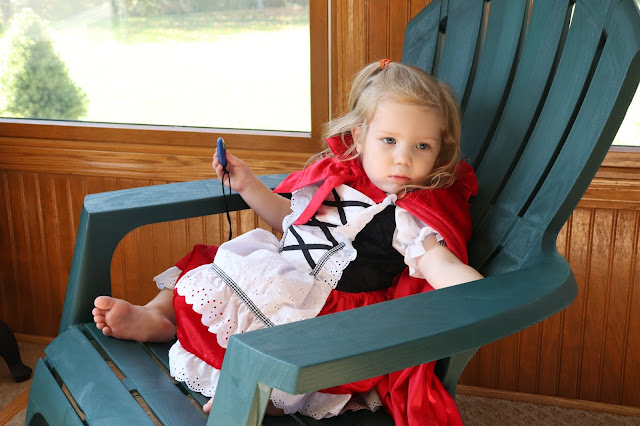 Fridays are my favorite days of the week, though, because as much as I love seeing Tessie's progress from school, I love that both she and James are home on Friday's with me and that the only thing that I have to do is take her into town for a combination hour of speech and occupational therapy, where every week her therapist's talk about how much more she can do than she did the week before.

It's a pretty exciting time.

Perhaps the most helpful thing is that now when I'm getting her dressed she actually helps me push her arms and legs into her pants and shirts instead of acting like she's being attacked by the clothes and is frantically trying to get away from them.

That is huge. Especially with winter rapidly approaching. 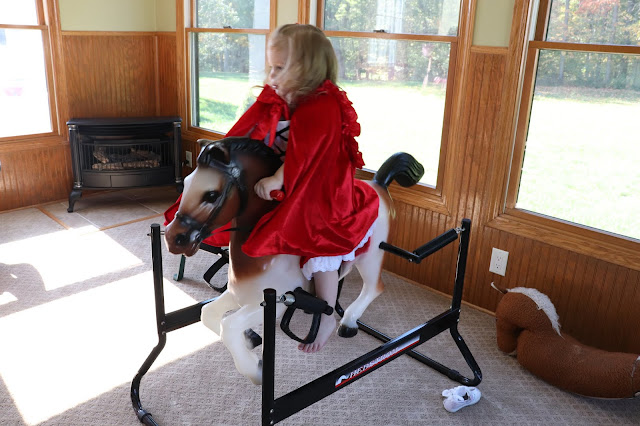 And as you can probably tell from these pictures she's all set for Halloween this year. She's going as Little Red Riding Hood. She has been obsessed with Goldie and Bear, basically since she was born.

I think it's the song at the beginning, and when you have older siblings you sometimes get to be in a room with kids TV that's on as an infant, but basically any time it came on from zero months onward she was gleeful when that particular song would play, which was not a reaction that we saw very often, since she was so often totally silent and not very responsive to anything.

And she still loves Goldie and Bear now!

We didn't see any Goldie costumes, but when I saw a Little Red Riding Hood costume I knew that it would be perfect!

And here is a much bigger update about all the awesome things that our tiniest bunny is doing: