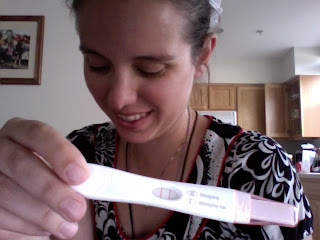 Earlier this week I took a pregnancy test and it came back positive.  I danced around and ran out to tell Paul.  I was pretty much on cloud nine for several hours.  Then for some reason (mostly my addiction to seeing that little double line positive sign) I decided to take another.  It was negative.  And another, which showed one little line.  And then one more, just in case there was something wrong with the other two, because let's face it, I was still in denial and pretty certain that that first test had been right.

The next day I gave it one more try and the little test strip showed nothing.  I resigned myself to the fact that the four negative tests were probably right.  (The test shown to the right is not a cheapie... It's one of the more expensive ones I bought that came back positive when we were trying to figure out what was wrong during the months of positives I got after the miscarriage... and at that point I was apparently still hopeful that it was a real positive, since we didn't have an accurate diagnosis yet.)

A few online friends pointed out that posters had said in the review section for the cheapie Amazon HCG tests that they were getting false positives with certain batches.  So I guess I can say I now have had a false positive from the cheapie tests.  Sigh.

Don't get me wrong, I still think they're worth buying.  When I went to Walgreen's yesterday to buy every single cough/flu product I could find (as of this morning every person in our home is sick... I was the last to fall... waking up sick this morning...) the average pregnancy test was around $8 per test.  On amazon you pay $9 for 50.  And out of the 100 or so (a conservative estimate) tests I've taken in the past year (the vast majority were when I was waiting for the tests to go negative the three months after the miscarriage) 99% have been accurate.

But I do think it's important to keep in mind that there's apparently a higher chance of false positives with them than with the pricer tests.

The solution to this is to make sure to test a second time immediately if you do get a positive, hopefully while managing not to be hopeful or happy, so that those hopes aren't squashed if it is a test error.

Ah well.  Sadie was wrong.  I tested after she said:  "Mommy, you're tummy is looking bigger.  Do you think there's a baby in there?"  Wishful thinking, combined with pre-schooler honesty.  I do have to laugh at her frequent evaluating glances at my tummy.  Now if only I could get her to keep certain thoughts to herself!
Posted by Cammie Diane at 7:51 AM