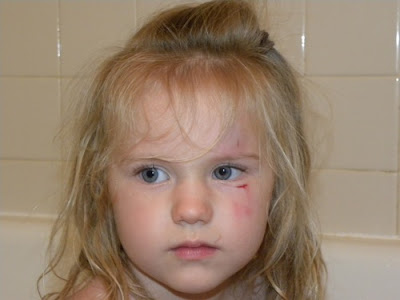 As I mentioned in my earlier post, everyone in the house has some sort of flu/cold combo that we're all trying to kick.  Sadie was the hardest hit yesterday, going to lay down in her room by herself and then telling Nani on the phone that she was too sick to go on an airplane to see her (Nani and Grumpa are flying out tomorrow and apparently Sadie had the travel plans switched around).

When Paul got home from classes I told him that I thought we should try to get her in to see someone, since it was Friday, and I didn't want to wait until the weekend and be stuck going to the ER.  Thankfully we'd just gotten a flier in the mail for a clinic, not far from our apartment.  It said "Family Center" and "Urgent Care" with a "average 10 minute wait time" and, the icing on the cake, "$35 per appointment."  The $35 was my favorite part, because most of the urgent care places we've been to don't take our insurance, and on a sliding scale for income we still paid around $100 for the doctor to say Mae had an ear infection (which we knew) and to write a prescription for antibiotics (I'd hate to see what the "scale" was for people above the poverty level because that seems a little steep to me).  And since the girls' doctor doesn't have a receptionist, but goes straight to an answering machine, we knew we wouldn't be getting in to see him before the weekend began.

So Paul called the office and said that we had two sick little girls who needed an appointment.  He came back into the room a few minutes later, shaking his head:  "They said they don't see kids.  They don't have a pediatrician."  I had figured that they wouldn't have a pediatrician, but since we just moved from a small town, our girls have both always seen general practitioners, and that's never been an issue.  "It's kind of weird," he continued, "since this flier says "family center."

Which does leave you wondering.  What exactly does "family" mean in "family center urgent care" practice if you don't see children?  How would it be any different from any other Urgent Care center (and actually the other, non-"family" urgent care center did see Mae for her ear infection)?

I'm baffled.  I guess they just like how the name sounded.

Thankfully Sadie and Mae both seem a little better this morning.  We'll be resting up because we are traveling a few hours to meet Nani and Grumpa someplace fun, after Mass tomorrow.  Paul has a week off (from classes, if not studying) so we're going to try to make the most of it (although I'm sure there will still be lots of studying!).
Posted by Cammie Diane at 8:08 AM