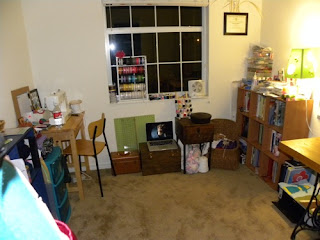 Having a workspace has made a huge difference in my life this past week.  I didn't realize how much time it took me to drag my sewing machine and other supplies out every single time I needed to use them, and then put them away if Mae woke up, so that she wouldn't have a chance to start pulling things apart.  Having a room with a door that I can close, leaving everything safely in place, has given me additional hours of work time each week.

And these extra, not-setting-up-or-taking-down hours are adding up.  I decided, for the first time ever, to figure out how much time I spent working at my SAHM "part time" job.  The answer?... roughly 6-7 hours a day, 6-7 days a week.  I've been trying really, really hard to take one evening off each week and just relax.  But lack of practice means I'm pretty horrible at that sort of thing, which is why it's 6-7 days a week instead of just plain old 6.  Sooo... that adds up to 36 (probably a low estimate) to 49 hours a week... with this week checking in at around 42 hours.

That's a lot of sewing!  And it doesn't count marketing and photographing and posting listings.  So I guess 50 hours a week would be better estimate, if you put all that other business stuff into the picture.  And yet, when I'm asked what I "do," I still say I'm a SAHM, because that's really the first priority.  Everything else is done during nap time or after bedtime. 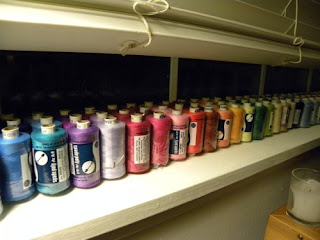 Sadie doesn't nap anymore, so she brings a coloring book during nap time and lays on the floor and colors, or rearranges pieces of fabric, or plays with a long red strand of beads that she found somewhere, that decorated our Christmas tree this past year.  And she watches me sew and asks me if I'm making a princess dress about 50,000 times an hour.

January was the busiest month I've ever had, which was very good, but which also meant that I didn't have any time to make any new creations.  There's been a bit of a lull lately (in other words orders aren't at least exceeding the days of the month in February) and so I've been busy making new springtime designs and have thrown myself back into making chaplets.  And a sort of schedule has emerged.

During nap time I sew, or I pin giant piles of headcoverings and stack them by color to be sewn after bedtime.  When bedtime arrives I begin by sewing for an hour or two and then I take out my beading supplies and work on chaplets and rosaries in the living room until my eyes are too tired to stay open, or hand sew the finishing touches on headcoverings.

I do want to squeeze in a little more time for new ideas, because I have so many of them bouncing around in my head, but I'm usually so sleepy by my around-midnight-bedtime, that I go to bed.

And that is my small business schedule!  I'm kind of surprised by how many hours I spend on it when I actually add them all up!
Posted by Cammie Diane at 8:06 AM