Yesterday I took the girls to the zoo.  We were walking along when we came across a sign announcing a new zoo attraction: 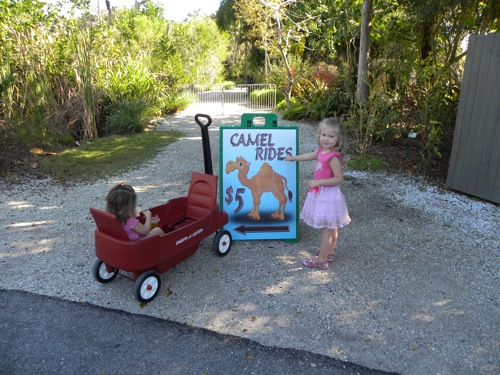 When we walked past the camels we paused to look at them and were asked if we wanted to ride them.  I said that I didn't think I could wrangle both girls together on top of a camel, so we'd have to pass for the day.  As we walked on I asked Sadie if she wanted to ride the camel some other time, if we came back with Daddy.  Her response was an adamant:  "No!!!!"  Followed by:  "I do not want to ride one.  They are very, very dangerous."

Before bed when I was on the phone with my Mom she repeated the same phrase two more times.  So I guess it will be a while before she's going to be willing to give it a try...

But... the camel ride sign did remind me of our camel story... which was also one of my first experiences when I really began to think about modesty:

A little over four years ago we were in Israel, on a religious pilgrimage. I'd been pretty sick the entire trip... on that particular night I was about 8 weeks pregnant and right in the middle of morning sickness.  Since our tour leader seemed determined to take us only to expensive restaurants, while keeping us away from markets of any kind, there hadn't been opportunities to buy snacks and the gap between 6am breakfast and 2pm lunch was definitely exasperating the situation, since snacks, at least for me, are really important in the first trimester.  The result meant I was a pretty sick, grouchy pregnant woman for much of the trip.

Late in the afternoon on one of our last days in Israel, we went to the Church that now stands in Bethany, where Jesus raised Lazarus from the dead.

Now as a side note, before leaving for Israel I'd purchased some long skirts and made sure to bring sweaters and tops with long sleeves.  I didn't really wear skirts or dresses much at the time, but I remembered the reaction I'd gotten walking down the street in long, knee length gym shorts when I was going to school in South Africa, and figured that a skirt might not be a bad thing in the middle east.

This trip was my first experience with the reactions that often accompany along skirts and dresses because while they made my interactions with many people in Israel easier they also meant that some of the other ladies in my tour were pretty sure I was being oppressed by my husband and kept trying to offer me short sleeved shirts to change into (they didn't even believe our priest who said: "no, she's dress appropriately for where we are"). 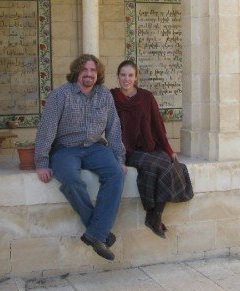 On this particular day though, we were going swimming in the Dead Sea and would be walking around parts of the desert in the morning.  I'd brought one pair of pants, a snazzy travel pair that turned from pants to capris to shorts with zippers and buttons, and I decided to wear them, with a cardigan and scarf.

Bethany was our last stop of the evening that day, before heading home for dinner, and I had noticed that the men we'd encountered, while not rude, were much less respectful. As we headed back for the bus Paul stopped in a shop to buy a beautiful crucifix we'd seen earlier.  He didn't want me walking back to the bus by myself, but I was exhausted and he was gabbing with the store owner and his family, so I pointed out that the bus was all of a hundred feet away and that there were people from our group outside.

As I walked to the bus I passed a member of our tour group getting down off a camel and stopped for a moment to watch.  Paul and I had been discussing camel riding all week.  He was adamant that it was dangerous.  I'm not sure, but I think he was pretty sure my lack of coordination would cause me to plunge to the ground in my delicate condition.  While I watched the man who owned the camel turned, saw me and announced that I needed my picture taken.  I told him no, I couldn't and he picked me up, carried me a ways, and flung me onto the camels back (I have a feeling this wouldn't have happened on one of the other, long skirt wearing days).  Someone ran into the shop and told Paul he needed to come quick.  He paid what was basically a five dollar ransom of sorts (the guy wasn't getting me down off the camel until Paul took a picture and handed over five dollars) and then had the camel sit down, while I looked sheepishly at Paul and he finally snapped a picture: 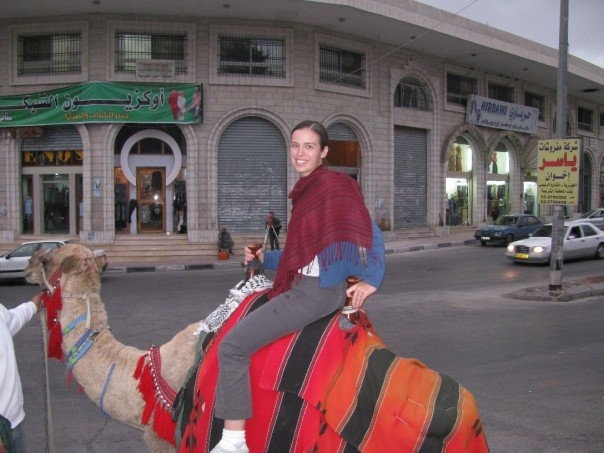 We've laughed about The Camel Incident, for the past four years...  but I think that might be where Sadie got the idea that "camels are very, very dangerous."  Or maybe, with all the talk of alligators and snakes around here, she just thinks that all animals in Florida are "very, very dangerous."

And that is why I had to snap a picture yesterday when we passed the sign for camel rides.  Maybe I'll be able to convince Sadie to ride one with me before Paul graduates from school!
Posted by Cammie Diane at 7:46 AM