Answer Me This: Bathing Suits, Tattoos I Wish I Didn't Have and Communion on the Tongue

1. When's the last time you got a new bathing suit?

It was 2011 when we moved to Florida and I used all the credit card points that I had at the time to buy a few clearance Land's End suits.  It was a good choice when moving to a place where we were at the splash park as often as not and there was a good chance I'd be chasing someone through the water who wasn't quite ready to go home at the end of the play session. 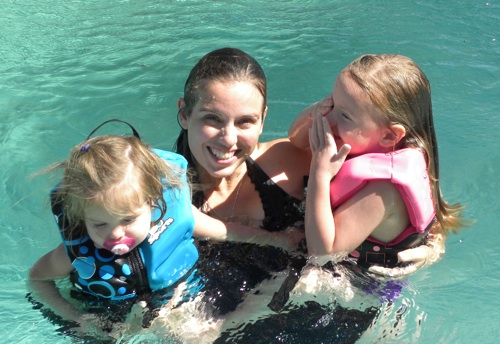 2. Who made the last incoming call on your phone?

I am 99% sure that it was my mom after my phone went dead while Sadie was talking to her, and that that call went to voice mail because my not-at-all-new phone was just worn out from all the talking that went on yesterday.

My phone goes dead a lot.  I am just not quite attached enough to the idea of cell phones and having a phone with me all the time to remember to charge it when I should.

Although I have gotten better since on any given day there's a good chance I'm going to be getting a call about a doctor's appointment or from a therapist about an upcoming appointment or getting a call from our case worker like we did this last Friday to hear that we may finally be getting in to see a speech therapist (although the words "probably before October" because of paper work needing to go through were mentioned, which would mean altogether a 12 month wait from the time we began waiting, which totally doesn't show how much work has gone into making it happen because everyone has really been working on our behalf to try to get her in... but lists are long and speech therapists have been hard to find!)... so I'm slowly becoming more responsible at making sure it's plugged in at least every couple of days so that I don't miss anything.

When I first went through RCIA we were introduced to receiving communion in hand and that's what I did.

Then Paul began receiving on the tongue, but I was too nervous about being one of the only people in our parish (and being a brand new Catholic) to make the switch with him.

Then I realized that having a baby was the perfect time to make the switch because I had no choice, with my always full hands, and could finally do what I'd been secretly longing to do for quite a while.

And now that my hands are always completely full and I'm usually trying to keep Mae from attempting to steal the chalice from the priest it really couldn't happen any other way!

Yes.  I have a few (or 23-ish).  I went through a phase.  I think you could probably call it a tattoo addiction. I just liked getting them.  Yes, it's probably weird.

I've had some of them lasered off  a few times (like the one pictured below) but it takes more than a few times for them to disappear and laser removal is expensive so more treatments have been moved into the indefinite future.

Thankfully most of them are mostly hidden.  Except the one on my neck (ek!  Stupid 22 year old mistake) and ankle, most people would never guess...  The one on my neck bugs me the most because... well... it's on my neck.  It's hard to miss.

And I feel slightly ridiculous walking around with "warrior" tattooed on the back of my neck while dragging around three kids.  Hopefully the dozens of students we run into on every single shopping trip who can read it at least get a laugh out of how ridiculous it now looks:

5. How many dinner plates are in your house?

Not very many.  My sets of china that we were given at the wedding are still back in California and that's probably a very good thing because plates and cups and bowls have a tendency to shatter around here.

When you have a kid that can rip giant bolts out of walls, destroys metal baby gates like it's nothing, and has actually broken the legs off a metal heater, glasses and plates really don't stand a chance.  My guess would be maybe 10 (assorted) dinner plates are scattered around the kitchen after yesterday's birthday waiting for me to get up the energy to fix the post-birthday mess situation that I was too tired to deal with after cleaning the rest of the house last night.  There definitely isn't a single complete set of anything glass anywhere inside the four walls of this house!

I tend to think I don't.  However, growing up in California a lot of people had trouble understanding the way that I say any words with the letters "ag" in them.  So words like bag or sag or hag or dragon or wagon all come out a little bit differently because I tend to (okay I couldn't even pretend to do otherwise even after careful coaching form friends, until at least college) say "ag" words like "egg."  So dragon sounds like "dregg-on."

I had no idea where it came from until I realized that my mom does it, as does my grandpa who's from North Dakota.  And sure enough, whenever I take those linguistic "where is your accent from" tests I get "North Dakota/parts of Minnesota" as the result, despite the fact that I'd never stepped into North Dakota until after I'd turned 30.

And how has it been passed on after all this time?

The other day when Sadie and I were working on spelling and vowel sounds I carefully sounded out an ag word saying the a sound the traditional way and she looked at me, shook her head and said "I think you meant to say 'bag'" (with the same -egg sound I still use unless I'm thinking very, very hard to be understood.).  So it looks like even though three generations have been born in California there's still a little bit of my grandpa's accent being passed along from his childhood in North Dakota.

For more Answer Me This head over to Catholic All Year!
Posted by Cammie Diane at 9:10 AM