Misconceptions about Discipline and Autism 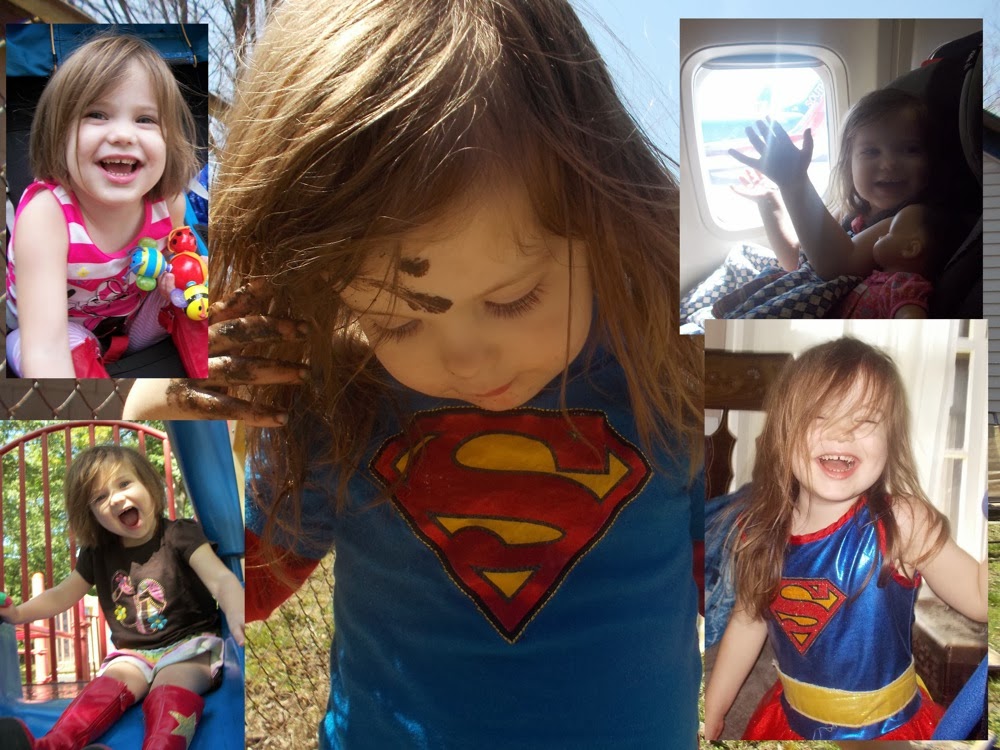 There are a lot of misconceptions floating around out there about individuals on the autism spectrum.

Sometimes it seems odd (to me) to be writing about them here because I'm not an authority on the subject.  Over the years I've tried out various hats in the blog arena but I would say that as the years have rolled along it's become more and more clear that I'm a mom blogger like thousands of other mom bloggers out there.
Besides, my daughter hasn't even had her diagnosis for a year.

It was a year ago this month that I first began to face some of my concerns, that I first filled out and filed paperwork through the state with my local school district for testing (who, by the way, still hasn't contacted me to set up testing, despite their letters promising that I'd hear from them in September of 2013).  Thankfully, in September her doctor recognized that something was going on and immediately ordered further testing for her.  The answers quite suddenly began to pour in, in the form of report after report and those results became increasingly less shocking simply by virtue of their consistency.

Maybe I'm getting ahead of myself though.  I began writing about how I don't really feel qualified to write about autism... and yet it's a frequent topic here because it's a big part of our lives. And more than ever tonight I feel compelled to write about a specific facet of the misunderstandings that abound when discussing life on the spectrum, after receiving a comment in the comment box that in some ways perfectly expressed some of the most popular and common misconception that are out there.  In many ways I'm very thankful that the comment was anonymous, because I don't want to single anyone out, and yet I think it's important that the topic be addressed because it's a thread I've seen running through so many conversations involving autism and especially autistic children. 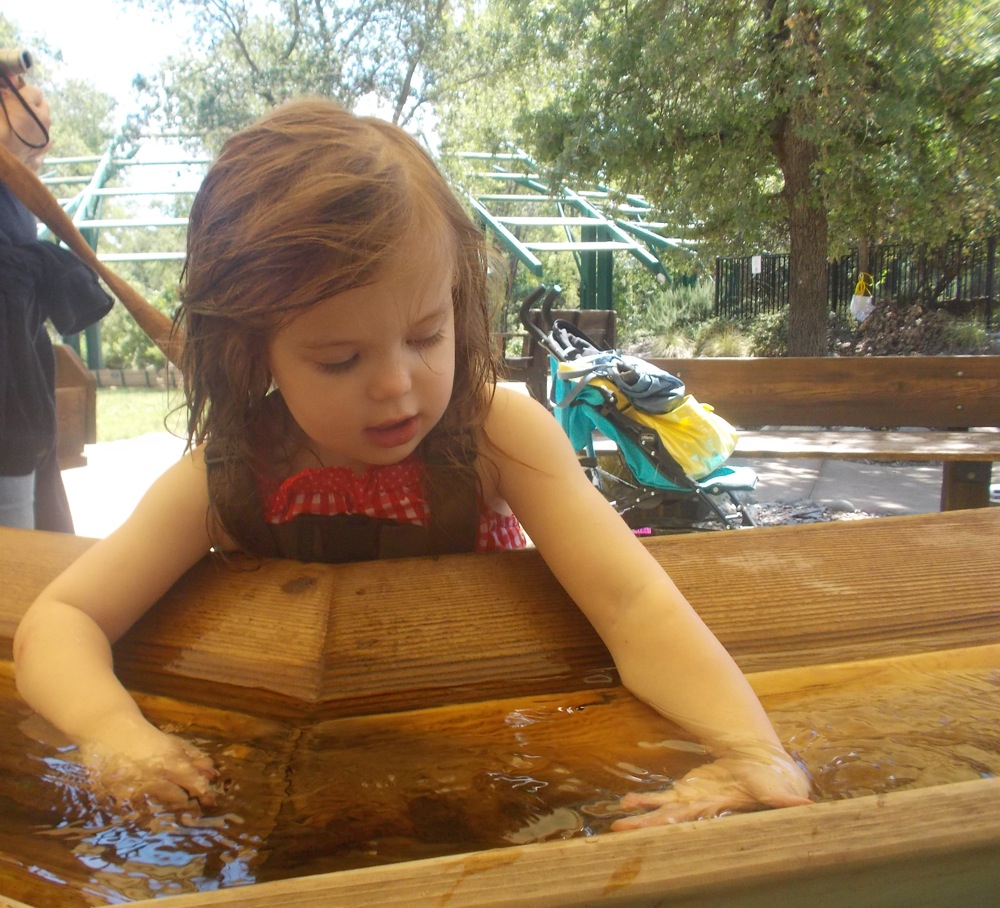 The comment basically expressed surprise that Mae isn't potty trained yet, since she's three.  When I responded that I doubted the reader was a regular reader (because I did assume that the commenter didn't know she was on the spectrum) and the commenter responded that they have read the blog and that they knew through my writing how smart Mae is and that if I "put my foot down" and gave her a "swat on the tush or time out" she'd be trained in two days.

The hormonal and pregnant mama bear in me may have made a brief (or not so brief) appearance at the words " Don't let her play you she is not a dumb girl! And it is beneath her dignity as a Christian to soil herself at such an old age." but then I reminded myself of the reason that I have blogged so openly about our journey since her diagnosis.

I'd like to shine a little bit of light on misconceptions just like this one and so I sat back and took a deep breath and tried to gather together all that I learned in the last nine months since I began reading everything that I could get my hands on about life on the spectrum. 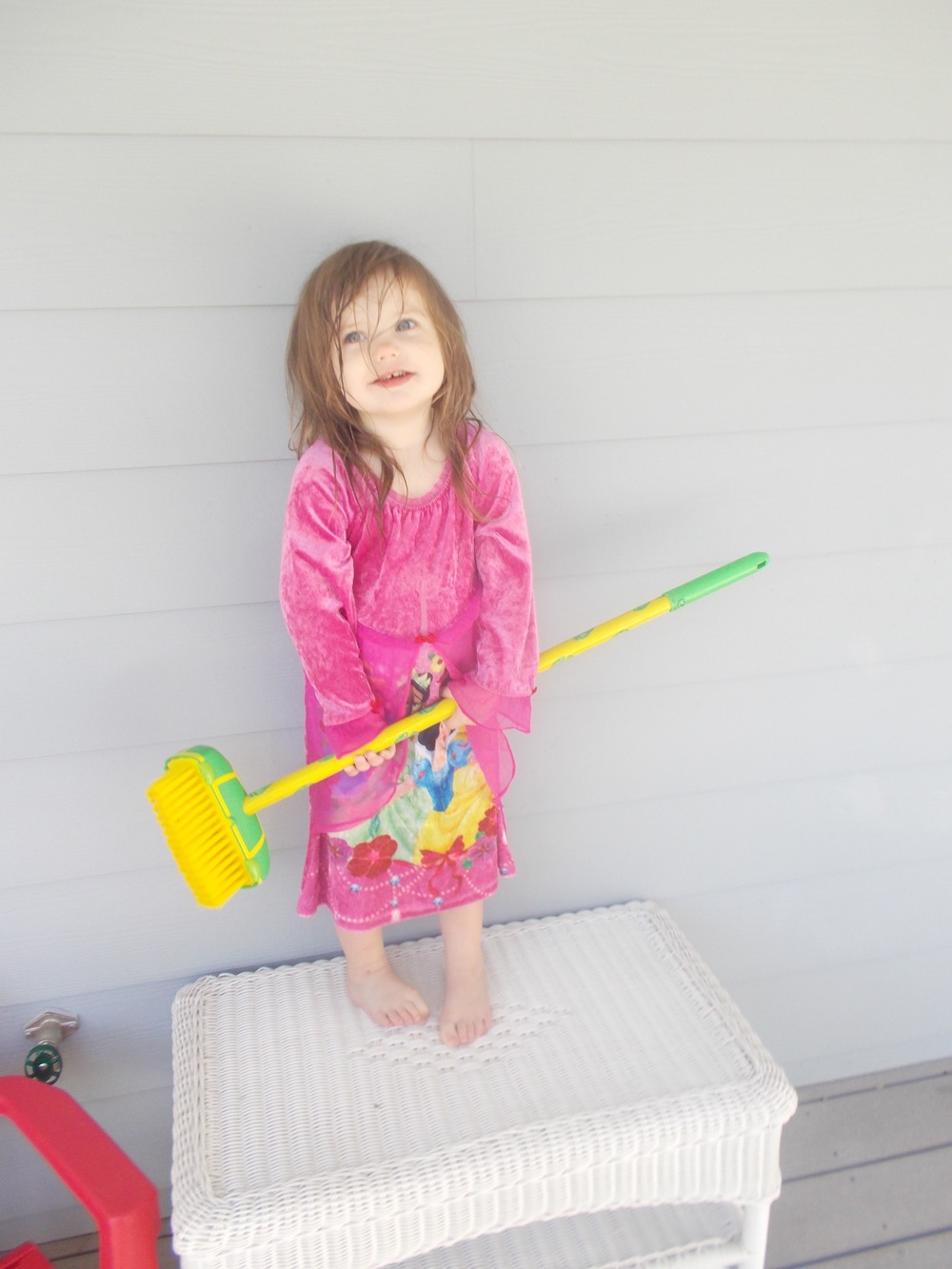 I'd say that one of the most popular misconceptions out there is that through incredible discipline (or even corporal punishment) a child on the spectrum can be made to act like a neurotypical child.  There's a strong belief from many out there that if you just spank an autistic child or guide them in a firm enough manner you'll somehow squeeze the autism out of them.  This expectation is probably especially strong in the many cases where the person on the spectrum does clearly demonstrate their intelligence in other ways.  After all, if they're that smart, they should be able to control these other aspects of their lives that often seem so out of control.

However, when you begin reading the writings of autistic adults it becomes instantly clear how false these ideas are.  I've read writers who describe the difficulty of controlling their bodies, the reality of having every nerve overloaded and working to control that surpluss of information, and who speak of the incredible effort it takes just to take control of the many sensory messages that their bodies are receiving and mold that information and force their thoughts into actions or words that would very likely be simple for a neurotypical person.

My words describing their experiences fall short, and I'm sure there are many out there who could express it so much more clearly and eloquently than I'm doing right now, so bear with me.  Or better yet read autistic bloggers (if you check out my blog roll listed at the top there's a section with autism blogs).  Read about their struggles in their own words if you're at all interested in understanding life on the spectrum.  That is absolutely the best place to start.

In reality, parents of kids on the spectrum will likely wince, either internally or externally when they hear the claim that it's mostly a matter of discipline, because they know that that simply isn't the case.  And honestly if you've really spent any time with a child with autism the idea becomes patently ridiculous.  If you've watched your child struggle to find a word, a simple easy word to ask for something (and likely come up with nothing) and dissolve into tears of frustration because they can't express themselves, you know that what's going on goes far beyond simple discipline and determination.

Unless of course you believe that there are many individuals out there simply pretending to have a disability because... it's fun?  I think we can all agree that's not it and that these challenges are very, very real.  There are brilliant non-verbal autistics, there are intelligent individuals who express themselves amazingly with the assistance of technology, and there brilliant individuals who will never be able to live on their own (often these categories overlap) and that is not because navigating in a world where so many of our interactions are based on spoken words is so pleasant that they just decided to go that route. 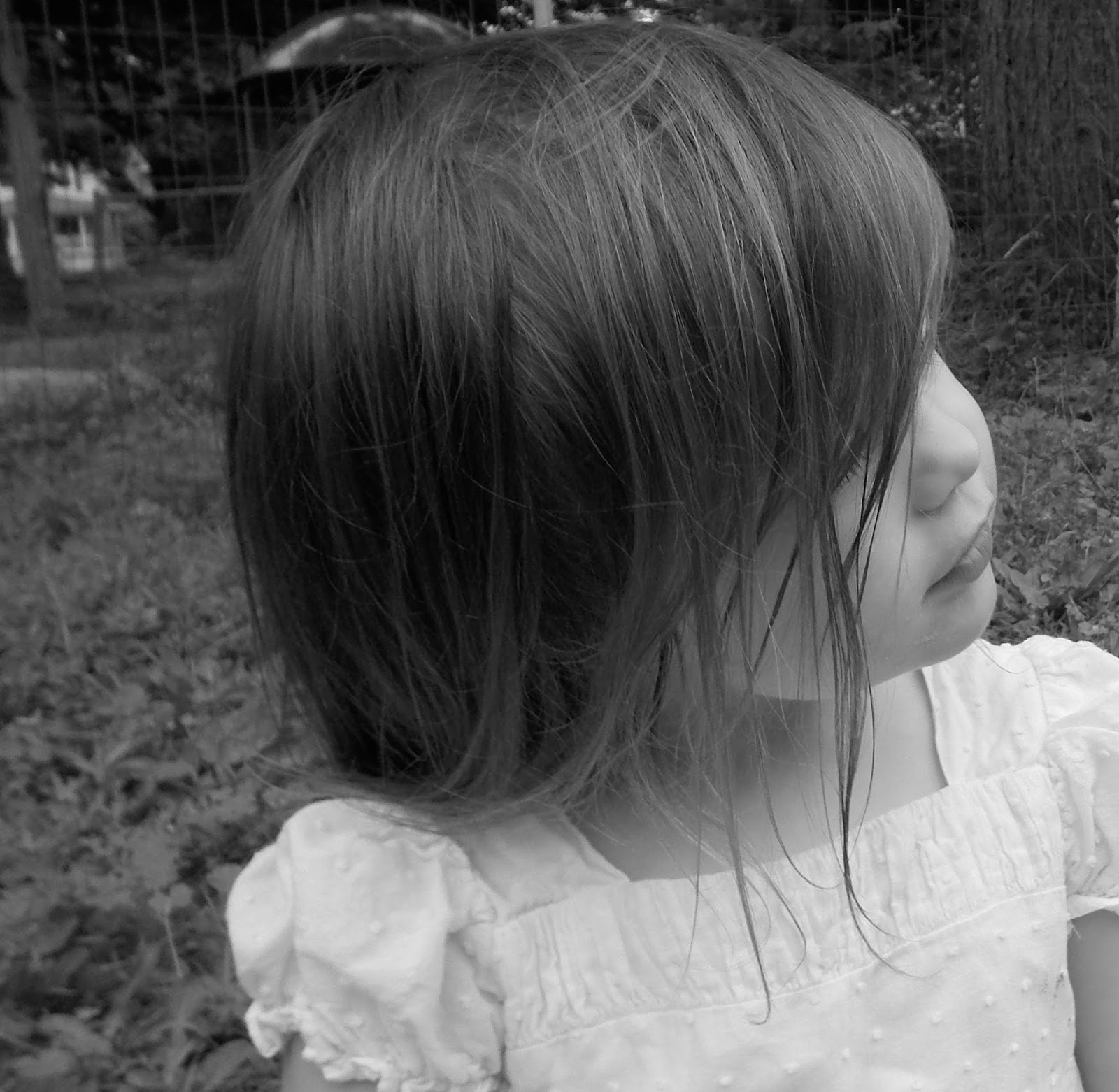 I've heard a few people compare the difference between an autistic brain and a neurotypical brain as a difference in operating systems.  When I watch my children play it's clear that Mae's brain is not wired quite the same way as Patch's, although it does seem to be slightly closer in many ways to her big sister.  Things that are easy for Patch are harder for her, despite the two years she has on him.  Perhaps one of the most amazing things I've noticed lately is watching her watch him master something and then watching her go over and try to copy his movements, which at nineteen months are already often easier for him to control than they are for her.

To put it in another way, the things Mae has been working on mastering include actions as simple as reaching across her body (crossing the midline) to pick something up.  This week she was also working on taking the cap off of a marker and on drawing horizontal lines (vertical lines are easy, but horizontal lines?  Not so much...).

Things that may seem so simple to many people out there, are tasks that she is diligently working on mastering after hours after therapy.  Most of us probably can't imagine spending nine months in therapy, six days a week and still struggling to reach across our body to pick something up.  So intelligence doesn't necessarily mean that everything is going to be easy peasy. 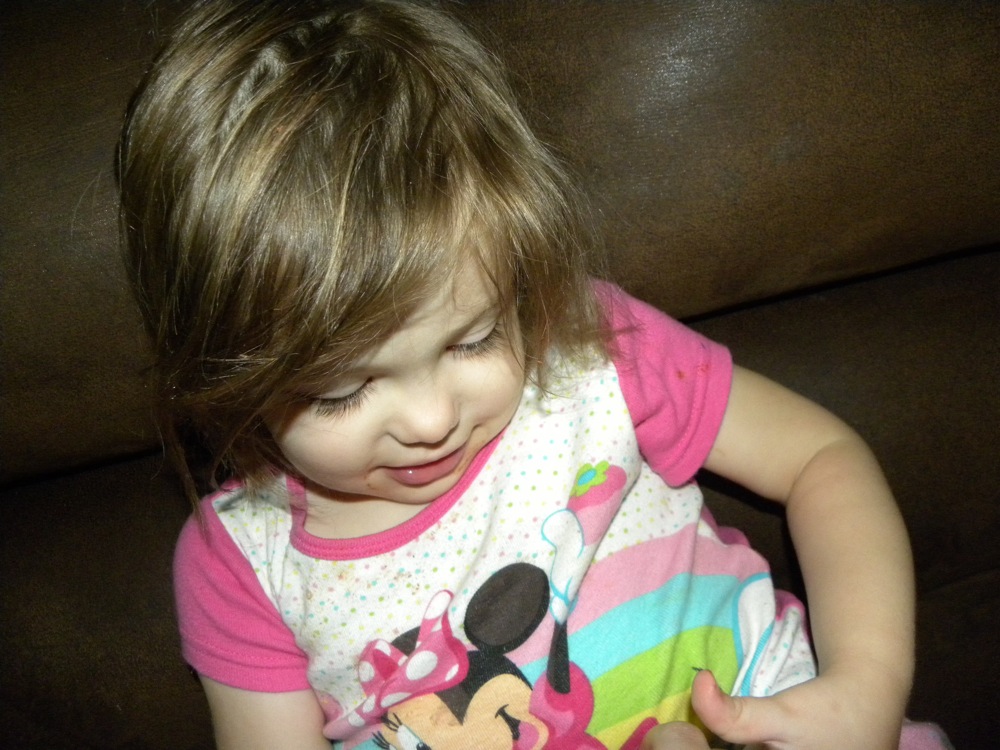 Brains, even neurotypical brains, don't necessarily work uniformly. Being a math genius doesn't mean you'll be a brilliant writer.  And having a passion for putting puzzles together doesn't mean that a child has the bladder control, or the mental space to master that task, while simultaneously processing a sensory overloaded world.

I imagine Paul would laugh and roll his eyes if he heard it implied that I was lax on discipline.  I tend to run a pretty tight ship around here.  If I have a concern in the discipline area it's likely that I'm too strict.  Maybe we can say that it's just my INTJ personality creating order in a world of toddlers and meltdowns.  And interestingly enough none of that has changed a thing about the neurology of Mae's brain.  I do know that Mae has made me more patient and understanding.... both things that I most certainly needed and have benefited from.

That doesn't mean, however that over the years Mae has spent plenty of time in "time out."  It's actually her refuge.  It's where she goes when she's so overloaded that she can't handle the sights and sounds of the worlds.  Sometimes she cries and demands to be put in time out and I sigh and hold her hand and lead her up to her room, where she quickly closes the door and curls up in her bed and blocks out the too busy world. 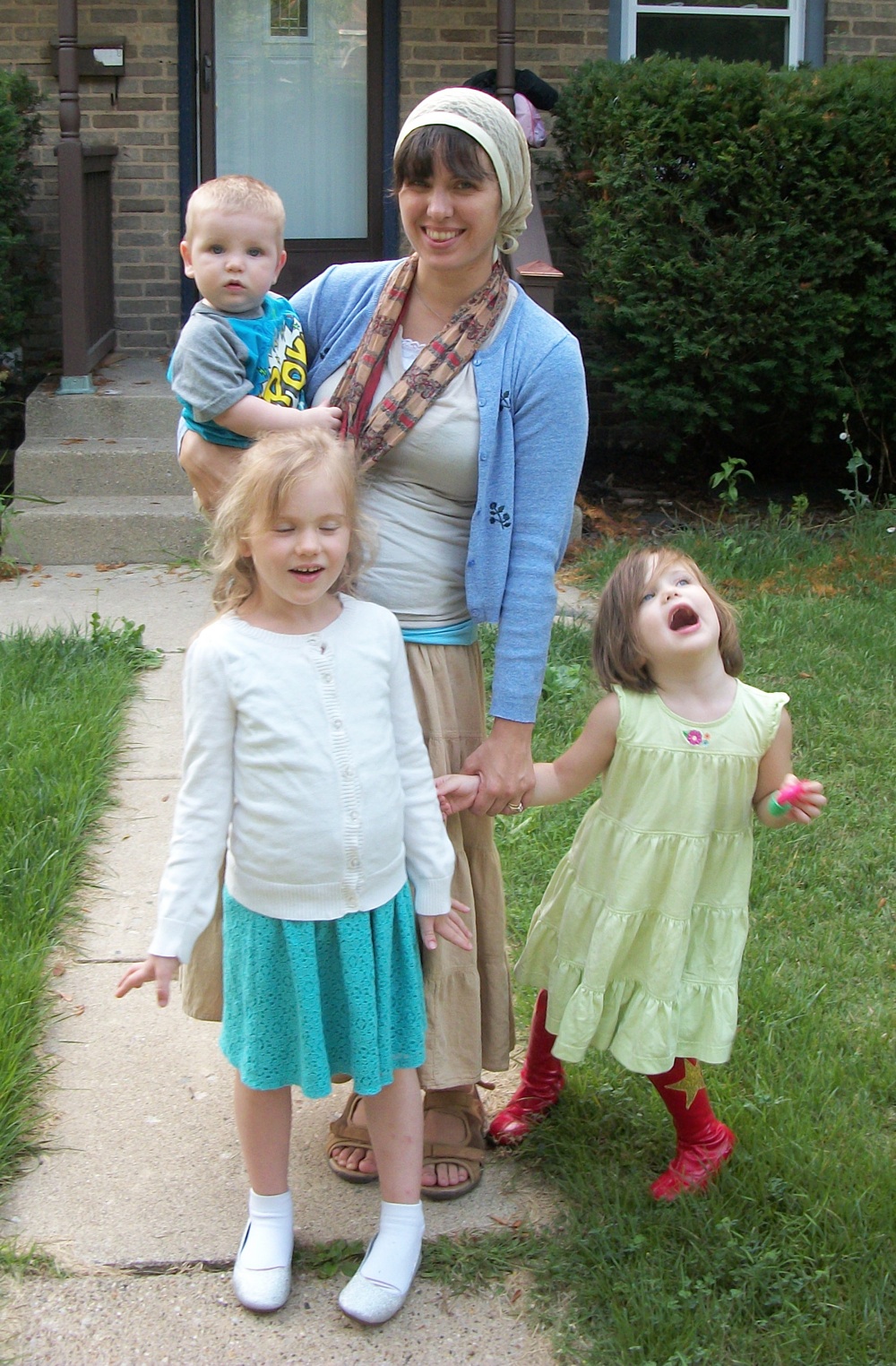 By the world's standards I've been changing diapers for a while (six years now without a break... and let's face it, that's stretching on into the undefined future... which I suspect is filled with diapers galore.).  Yet I don't think I'm the one who has the greater of the challenges here.  Changing diapers for a little bit longer than the norm hasn't killed me yet, and I'm fairly sure that it isn't going to.

In fact, I suspect that it might be good for my soul.  Serving those who need it in this basic way and not pushing a child to her detriment because I imagine something would be more convenient for me is, I can't help but thinking, very much a part of this path that I'm stumbling and tripping down.

My job, is to help her guide her through the challenges that she'll face, just as I strive to do with my other children.  My job isn't to shame her when she doesn't hit a milestone in a socially acceptable amount of time.  It's to be there for her when she triumphs and to hold her hand and help her when she needs me.
No, I won't be telling her that any facet of her amazing little self, with her particular brand of challenges, is somehow below her "Christian dignity."  After all I very much believe that she was created with this neurology and that it is very much a part of her journey on this Earth.  I don't believe it's a mistake or that her struggles are somehow shameful.  Instead her struggles make days like today, and make moments that might seem small and inconsequential to others, like using the potty for the first time, into triumphs.  And if there's one thing that having a child on the spectrum has taught me, it is that life is so much sweeter with these tiny triumphs, that may seem absolutely ordinary to the outside world, popping up at every turn.
Posted by Cammie Diane at 11:43 PM