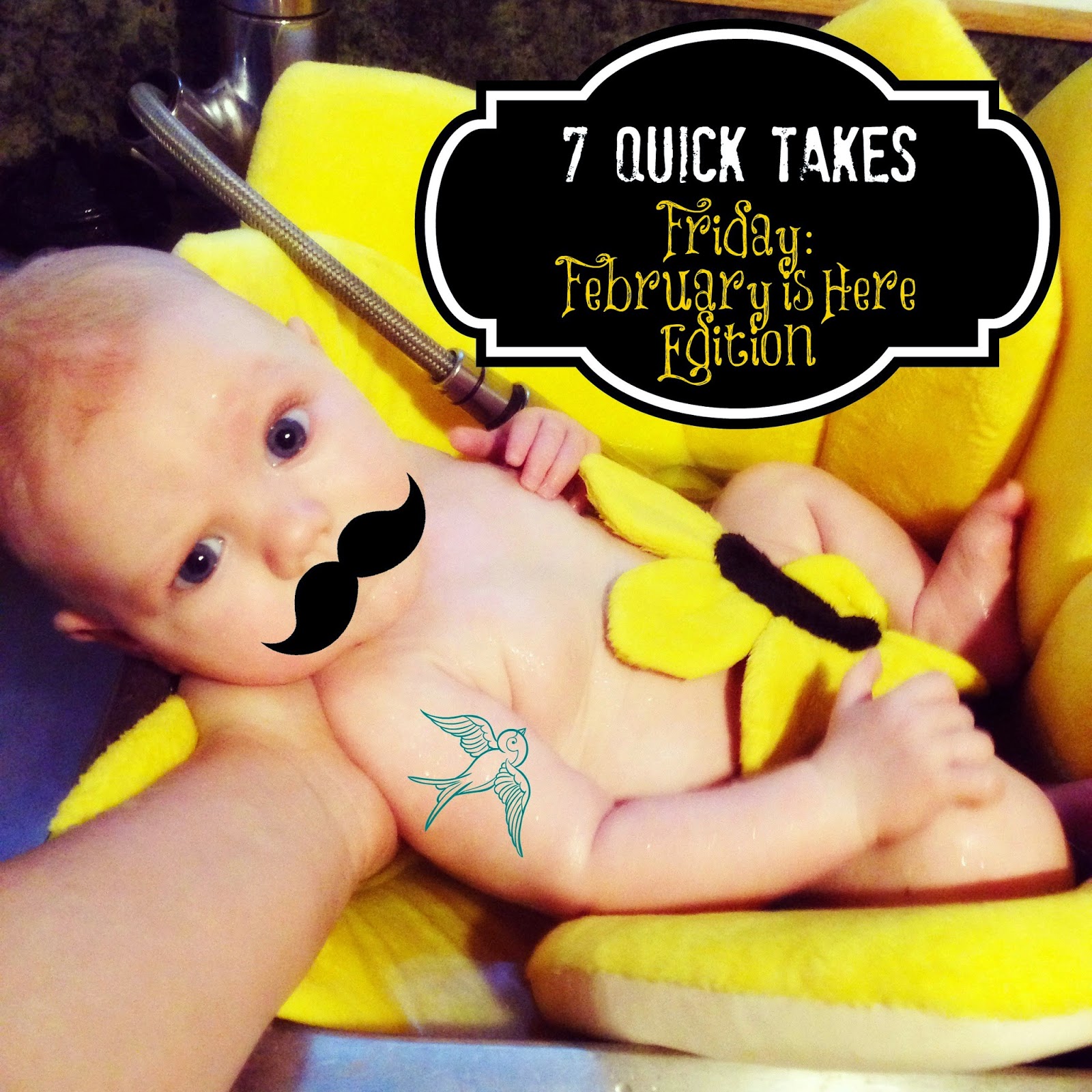 Can you believe that it's already February?  And what is it about February that makes the days seem longer, making it feel like the longest month of the year when it's really the shortest?  I put together a little bit of the good, the not-so-good, the cute and the snowy for today's Quick Takes! 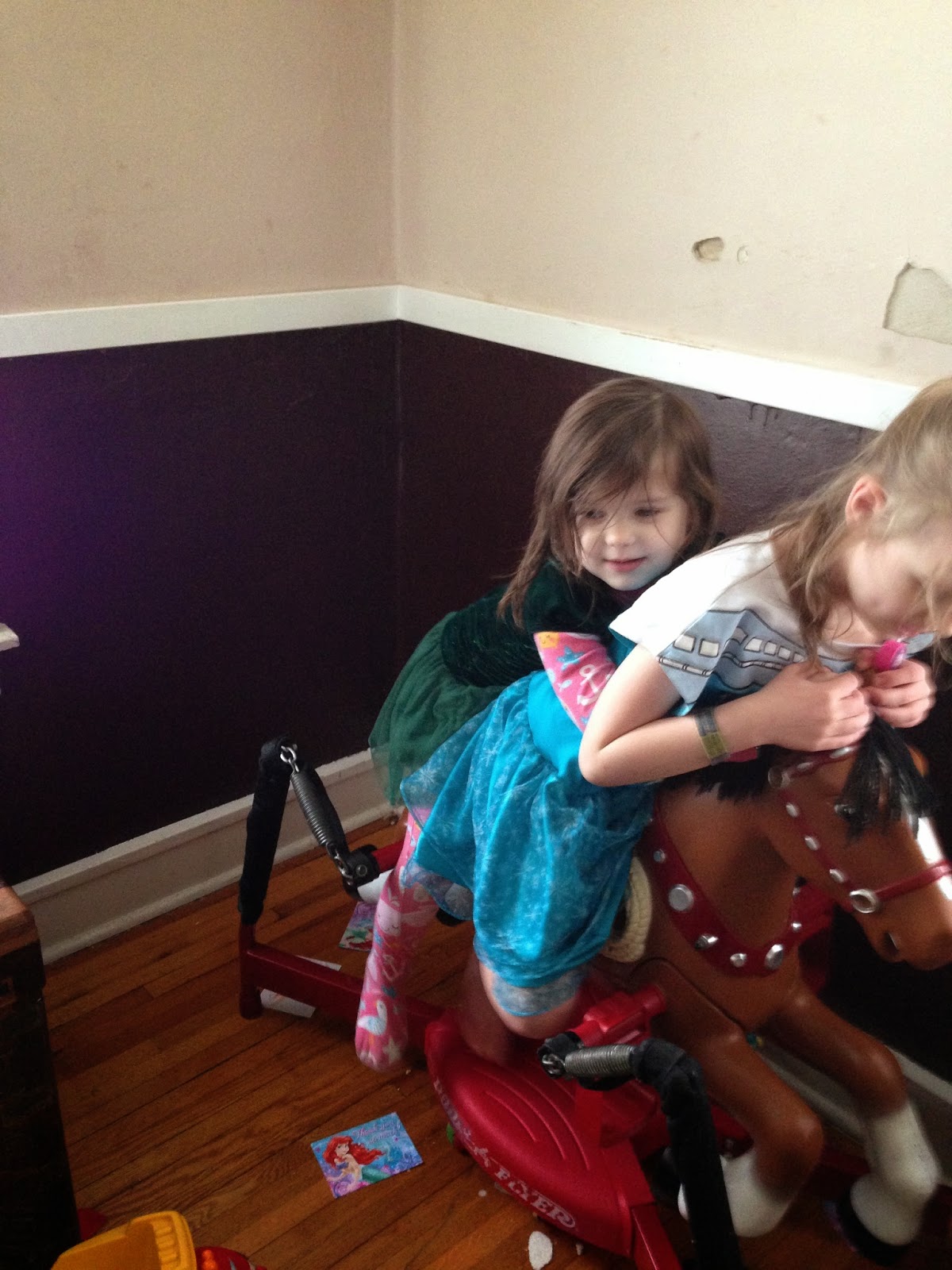 A couple of years ago one of my best friends from college gave the girls a set of four Chinese to English picture books that she brought back from Hong King.  The books are tall and thin with strips of pictures down the sides and flaps that run the length of the book with the words in Chinese on one side and English on the other.

Maggie has discovered these books and she loves them.
She's begun bringing them out during therapy.  This morning I looked for her favorite of the four and I couldn't find it anywhere.  Then suddenly she retrieved it from wherever she'd been hiding it and brought it to the table like it was her own personal little work book.
And suddenly we have an abundance of words.  They aren't always smooth or easy to understand.  But they're incredibly sweet to hear.

Tomato.  Watermelon.  Plane.  She points and labels and then hides the book away again to look at later.
Tonight she fell asleep in her big sister's bed reading one of the books.  After I moved her Sadie noticed the book and said "looks like Maggie's been reading again."  And it does.
And with her seemingly photographic memory (weeks after losing something behind or under the couch or in some other obscure place she can immediately to go the exact place to retrieve it) who knows... maybe when she's older we'll find out that she's taught herself how to read Chinese (or at least the characters in her books).

Earlier this week I was standing on top of step ladder taking down Christmas decorations and talking to Sadie.  When I moved to start to step down I lost my balance and toppled over backwards, catching myself after quite a fall, on Patch's high chair.  While I tried to decide how badly I'd hurt my shoulder Sadie looked on and said:

"Wow Mommy.  That was a really bad fall.  You're having a really tough day.  We've been working really hard.  You know what?  I think we both need a candy cane."

And then I couldn't help but smile, sore shoulder and all.

Patch has needed a hair cut for weeks... actually, probably months:
Yesterday Paul cut his hair.  He happily said "cheese" and posed for this picture afterwards:

Now he's definitely going to need a hat when we go outside!
﻿﻿

Now the boys all have matching short hair.  James is looking blonder every day, so I'm not sure if it will keep any of the red, or if it will start to get darker like Patch's has. 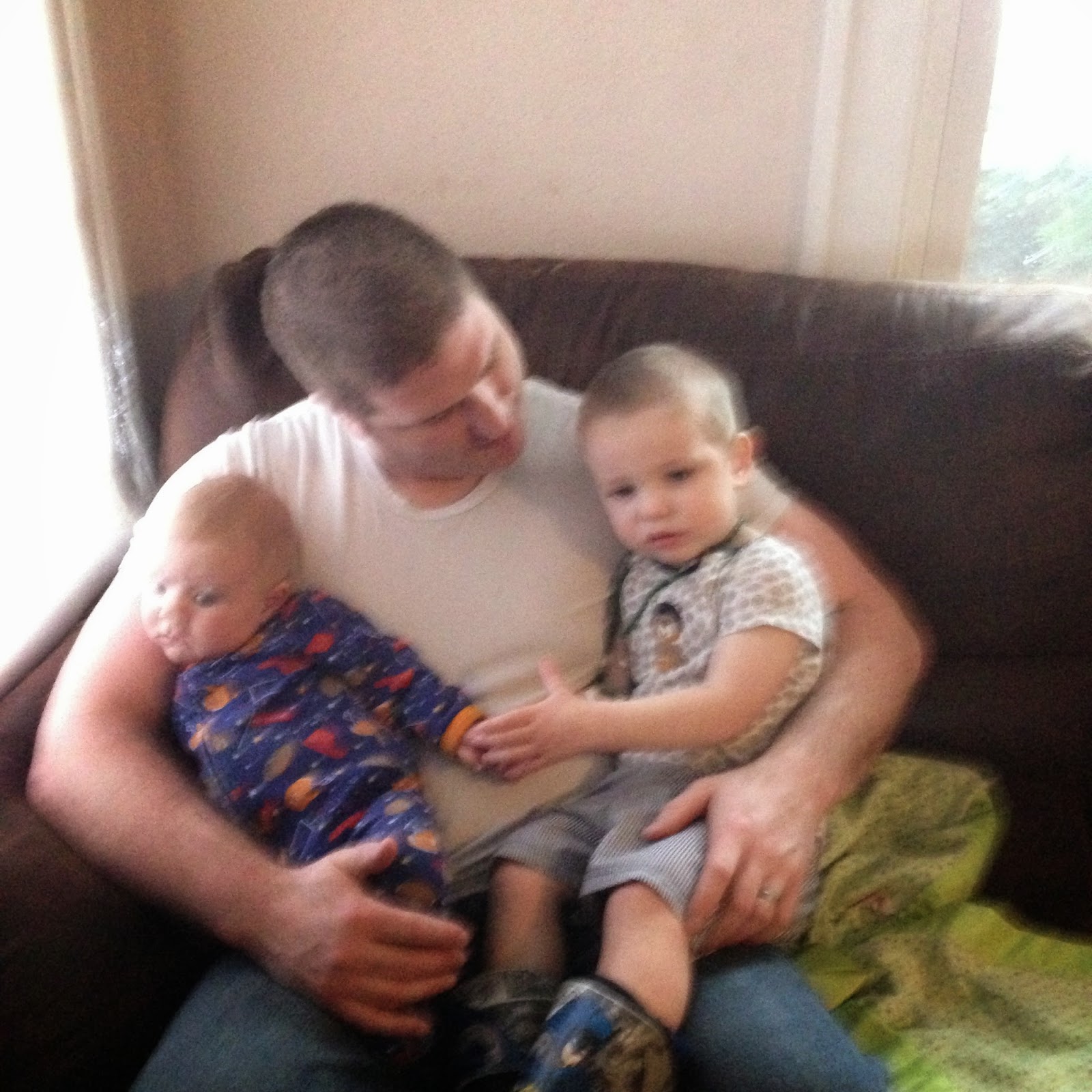 I have to say, the pair of clippers that we bought roughly five years ago have definitely been worth it.  Somewhere around sixty hair cuts later they've definitely paid for themselves many times over.
﻿﻿

Now that the Christmas decorations are down the mantle is back to being our little home altar again: 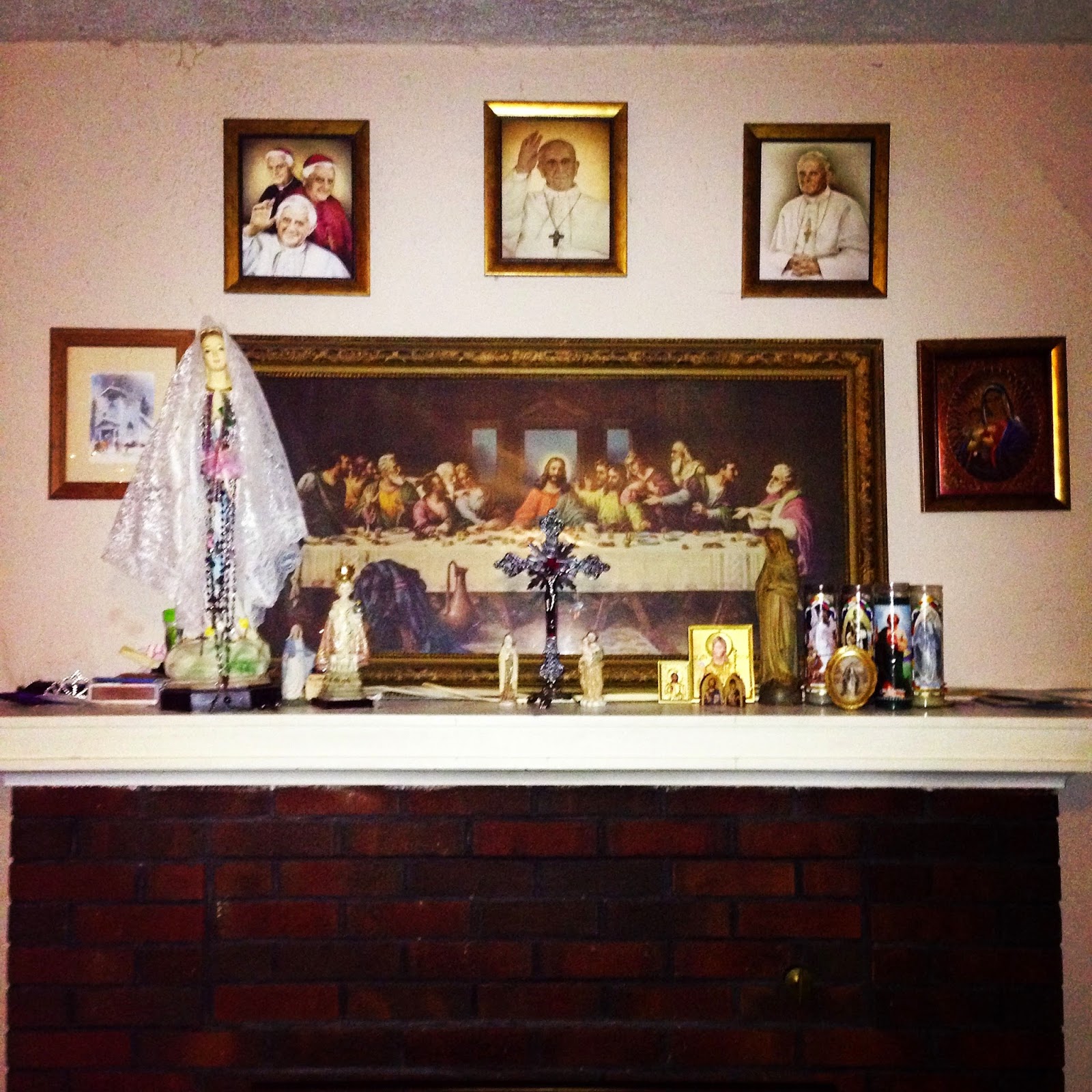 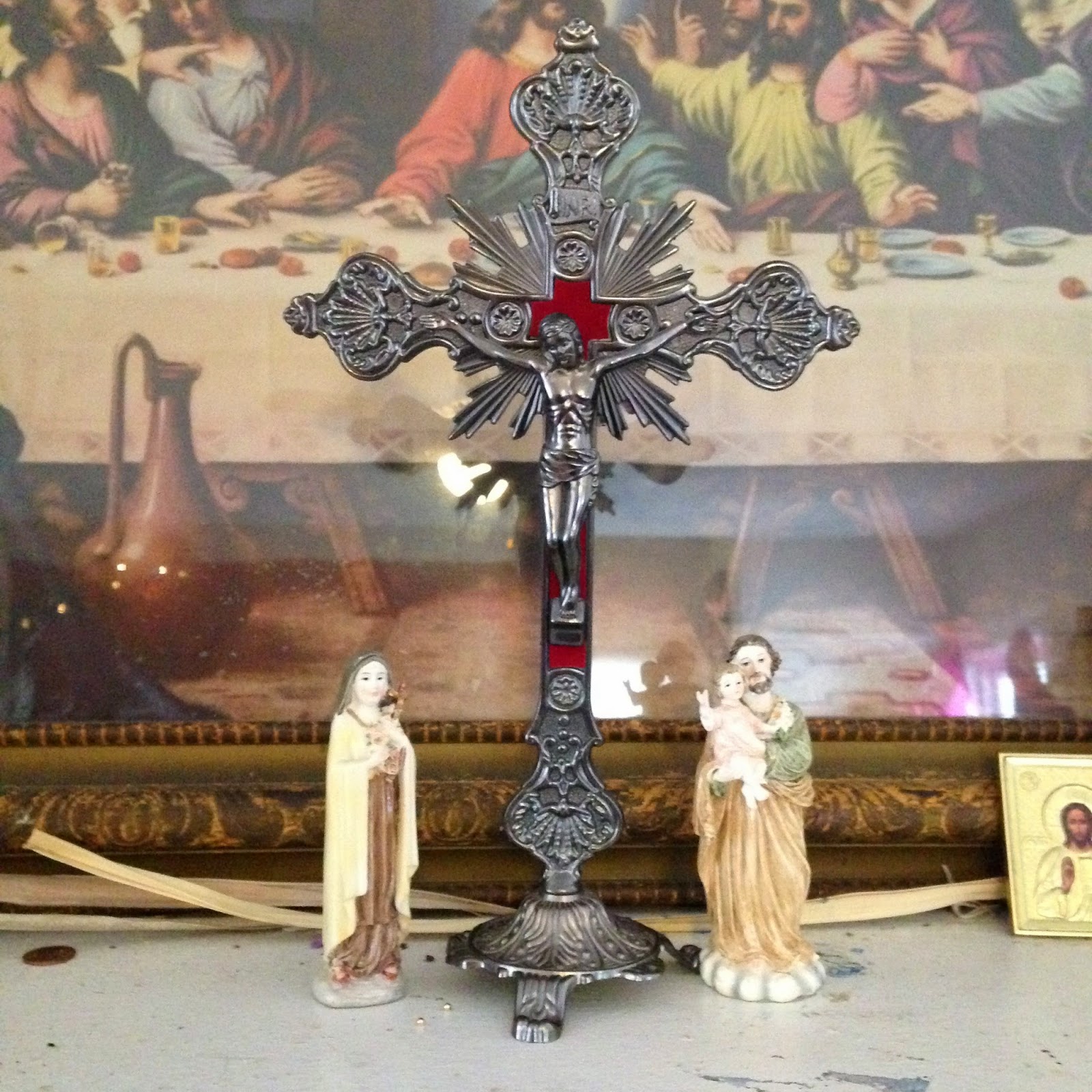 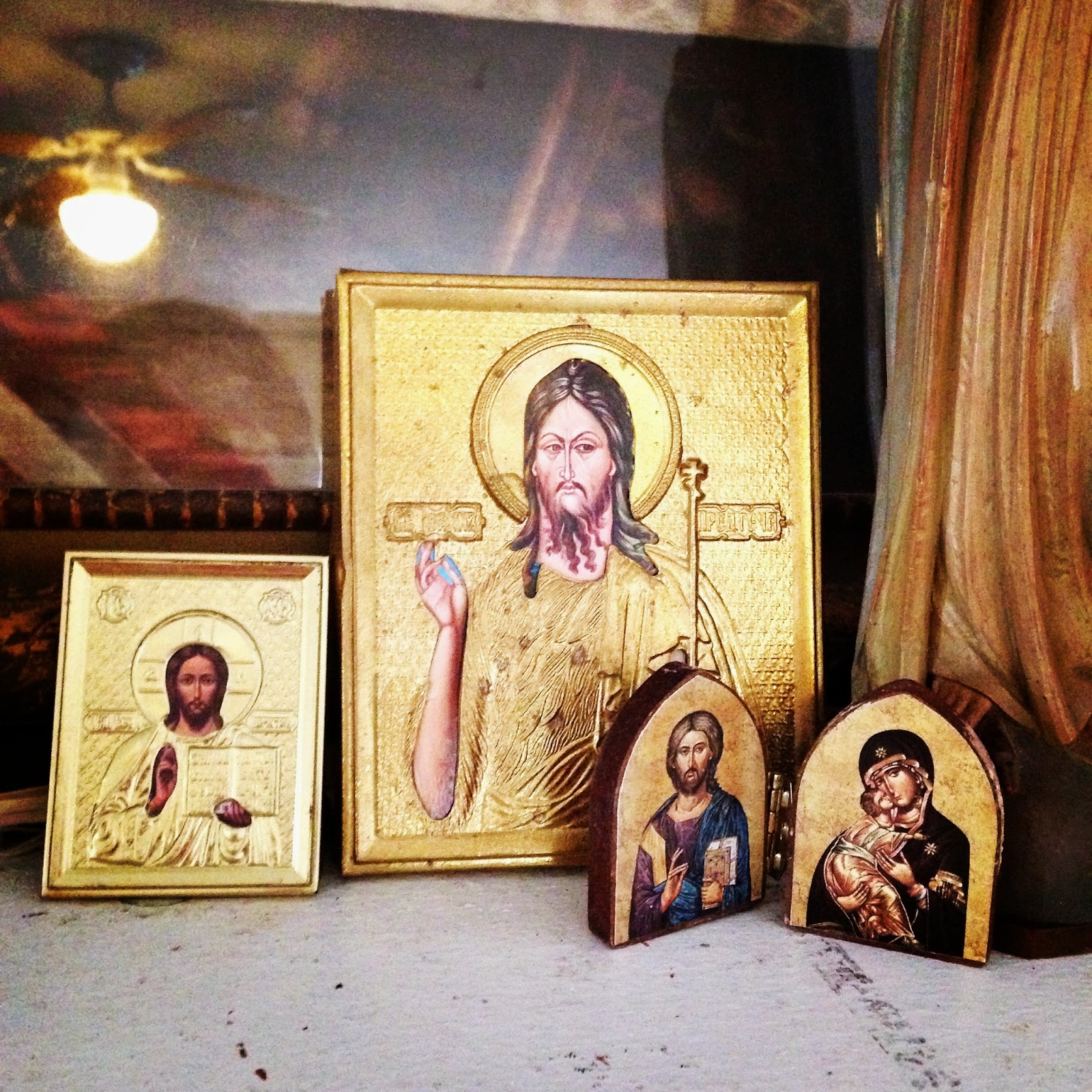 I'm enjoying the simplicity after ﻿﻿the festive decorations of the last month and a half.

Sometimes you spend almost two hours shoveling snow, and you manage to shovel all the way down to pavement, and you wake up in the morning and it looks like this: 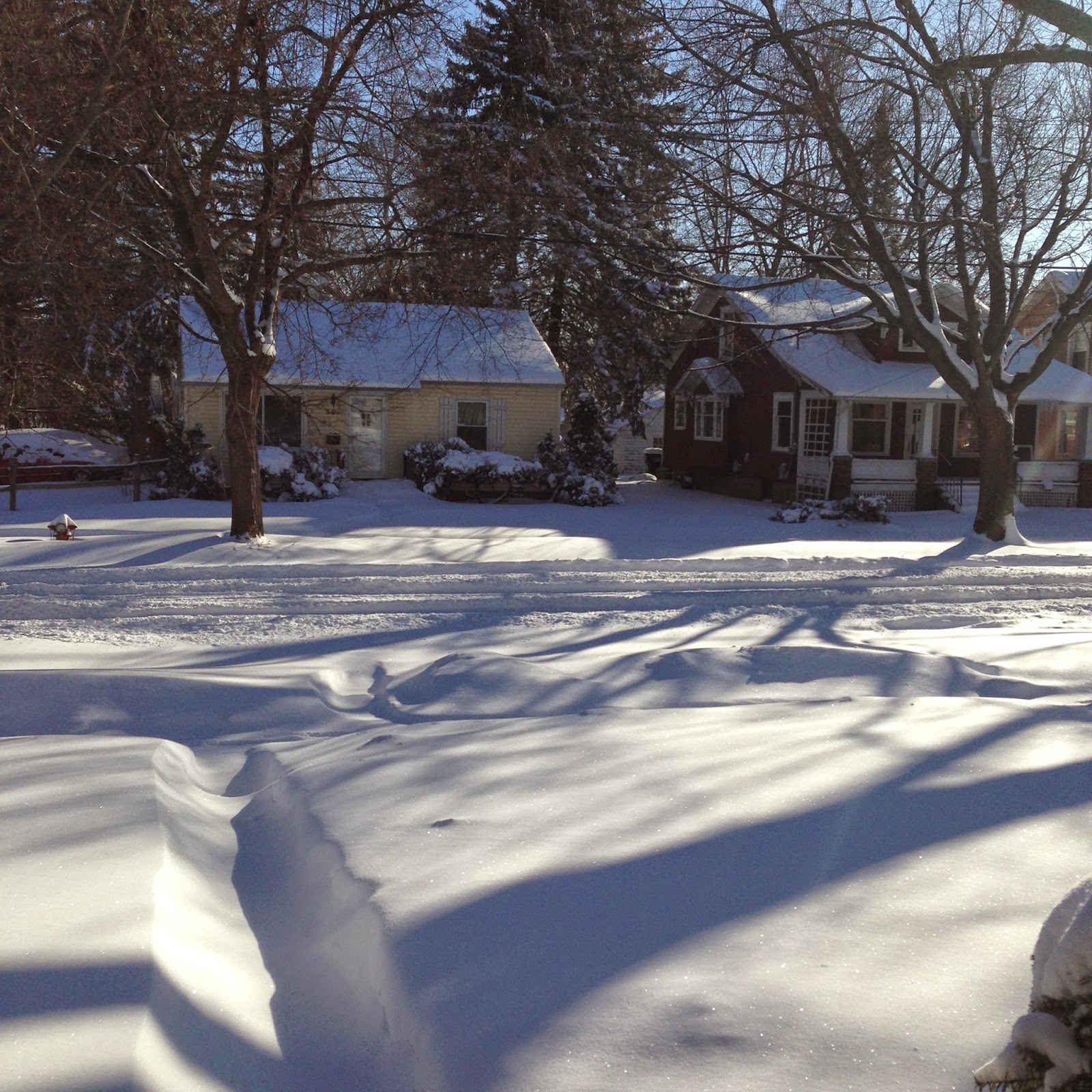 And then, if you're lucky, you can declare that it's someone else's turn to shovel... and hopefully it won't take that person nearly as long to clear the path (I think it took Paul about a quarter of the time).  ﻿﻿

The best part of the snow:

For more 7QT head over to This Ain't the Lyceum!