What's in My Bag?

Have you seen Lily Jade's diaper bags?
I have pretty much been mooning over them since sometime before I was pregnant with James.  When Paul asks if there's anything I want for any anniversary/Christmas/birthday I usually sigh dramatically and talk about this wonderful, beautiful, perfect diaper bag that is a backpack too and oh-my-goodness how awesome would a backpack/diaper bag be? until his eyes glaze over and I realize that I'm really only talking to myself about my favorite bag.
I've also been stalking Thred Up for a Lily Jade bag that someone has parted with, because I've been gradually accruing Thred Up credit sending stuff in as I've slowly cleaned out my closet... but alas, I have yet to see one appear second hand.
And I realize it's totally silly, because I've never even been a bag type of girl and when my friends were excited about designer bags in college I was rolling my eyes over the prices but "Look," I tell Paul, "look that the baby bag!  It's so practical!"
It's not really a realistic possibility at the moment, although I do enter just about any Lily Jade contest that I see going around, and one of these days I'm bound to win, right?  Which is the point of this post (because by now you're probably wondering if there is a point).
Nell is hosting a What's in My Bag Linkup that includes a giveaway that will involve not one, but three Lily Jade bags.  And to enter they're asking for a "what's in my bag" post.
So I got out the camera and dumped my bag out on the middle of the living room floor, while James complained that he didn't have 100% of my attention (and I'm pretty sure he was thinking "Mom!  It's ten o' clock at night!  This is when I throw a party that all my siblings are asleep and it's just you and me!") and I started snapping pictures.  And here's the result.
Here's my diaper bag.  It's a bag that I picked up in Montana when the girls and I were out there for Sadie's godmother's wedding when I was pregnant with Patch, so it's been around for a few years:﻿
And now for the contents: 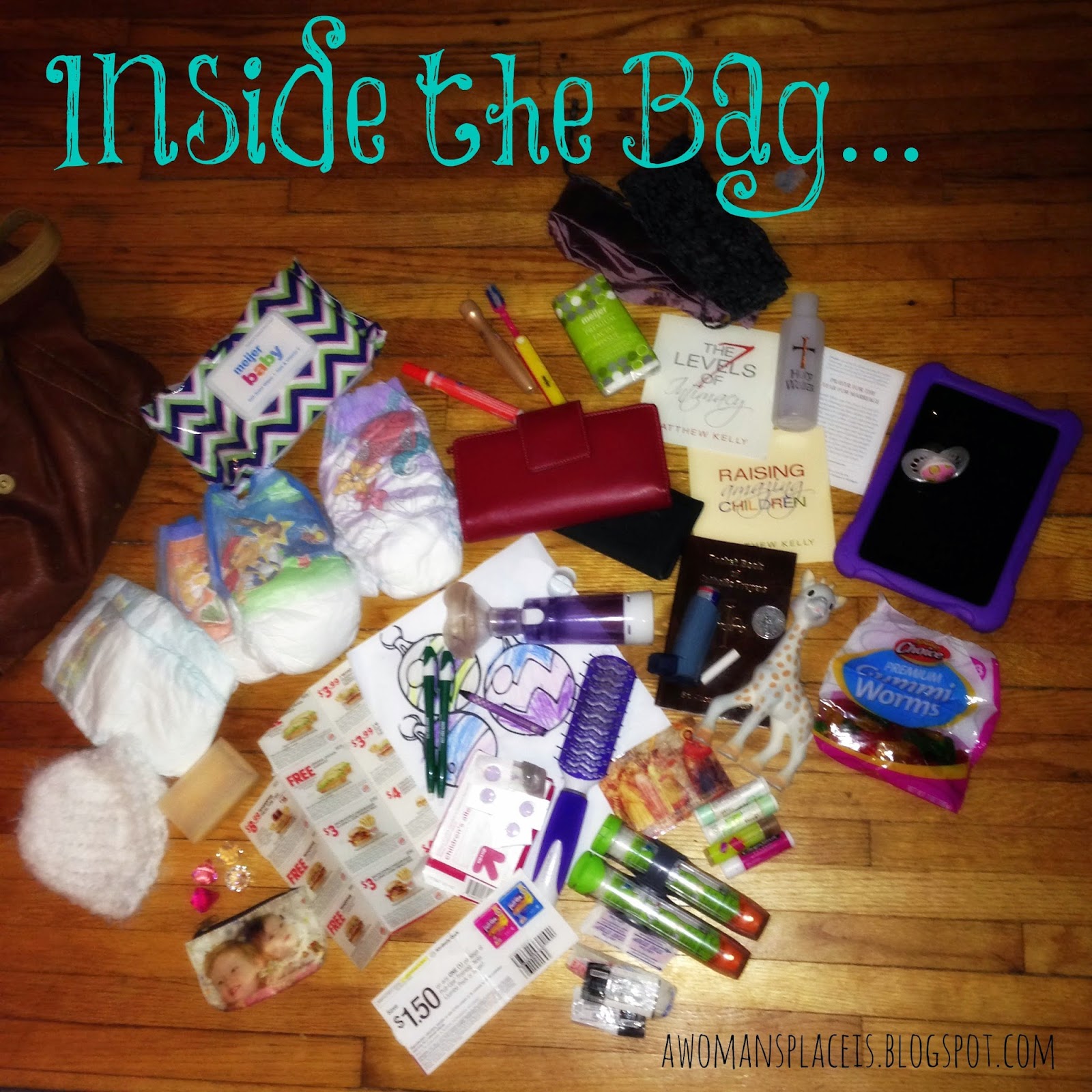 1 Sadie Knit baby hat (that's just about too small for James now)
1 Sensory Brush from Sadie's OT
4 little toy gems that belong to Sadie that have been in my purse for ages
Coin purse with the girls photo on it
2 Size 2 baby diapers
2 Size 3T-4T Pullups
1 4-8 Goodnite
1 pack of Meijer Wipes
Burger King Coupons
Pullups Coupon
Coloring page that Sadie colored while we were waiting for OT to start and a single purple crayon found at the bottom of my purse
2 pens from the MSU computer store (which I've never been in)
Pack of allergy melts for Sadie... or Patch... Or Maggie... or Me.
Purple Hair Brush
Inhaler with spacer and mask
Wallet and check book
Tide Stain Pen
Under eye circle concealer
Somebody's tooth brush
Tissues
2 of my convertible headband/headcoverings
2 CDs they were giving out at Mass last month
1 bottle of Holy Water that's been in my purse since they were handing them out on Little Christmas
Blessed Chalk that I had forgotten was in there
Little Book of Catholic prayers
Saint Michael prayer coin
2 prayer cards that were handed out at our parish
4 chap sticks
2 Epi-Pen Juniors
2 really beaten up band aids
Packets of antibiotic ointment that have been in my purse since I stepped on a nail and had to have it removed in the ER.  When I was pregnant with Patch.  I should probably toss those.
Sophie the Giraffe (Sophie doesn't spend much time in my purse... James loves her, so usually she's with him)
The Kindle Fire Sadie was given for Christmas a couple years ago.
A very, very old binkie
Gummy worms to bribe the kids when I really, really, really need them to be quiet.

Did anyone actually hang in there and read that?  I'm actually kind of surprised at how long the list is, because it didn't really feel like there was all that much stuff in there!

Fingers crossed!  Because the contents of that diaper bag could really use a "Baby Bag" to help organize it!
Posted by Cammie Diane at 8:20 AM