What I Wore Sunday: Babies and Polka Dots Edition

Today's Mass was a bit of a challenge.  A certain someone was in fine form and seemed to decide that they were going to balance out last weeks stellar behavior with some high pitched screaming.
Now let me tell you about this type of screaming.  This past month I've found that I'm losing the hearing in my left ear (it just stops working on a fairly regular basis and it sounds like I'm hearing everything from under water) and it's is accompanied by dizziness and spinning rooms, so to say that these screams are loud is something of an understatement (and yes, I should go see my doctor, and yes, I'm sort of putting it off because the kids have far too many doctor's appointments in the next month already and I have no idea how to fit it in).  This pitch and decibel of screaming will set off the alarm system in our house when it's armed, or when it's not armed, cause it to beep and say "glass shatter" ever time a new scream sounds.
So this was not you're average run of the mill scream during Mass.  Paul immediately removed the culprit once it was clear she wasn't going to be stopping and went to the car where he discovered that he could hear Mass, at least until the end of the hour, on the radio.
Which left me with the other three.  I was wearing Patch and James again today, since Patch would really like to run wild around the narthex during Mass.  I didn't get the waist band quite tight enough in my hurry to get inside, and found I couldn't tighten it while I was wearing James, so I got quite the shoulder workout.
Here I am eighty minutes after I strapped them on.  I'm doing my best to look like I'm not about to collapse.  ﻿ 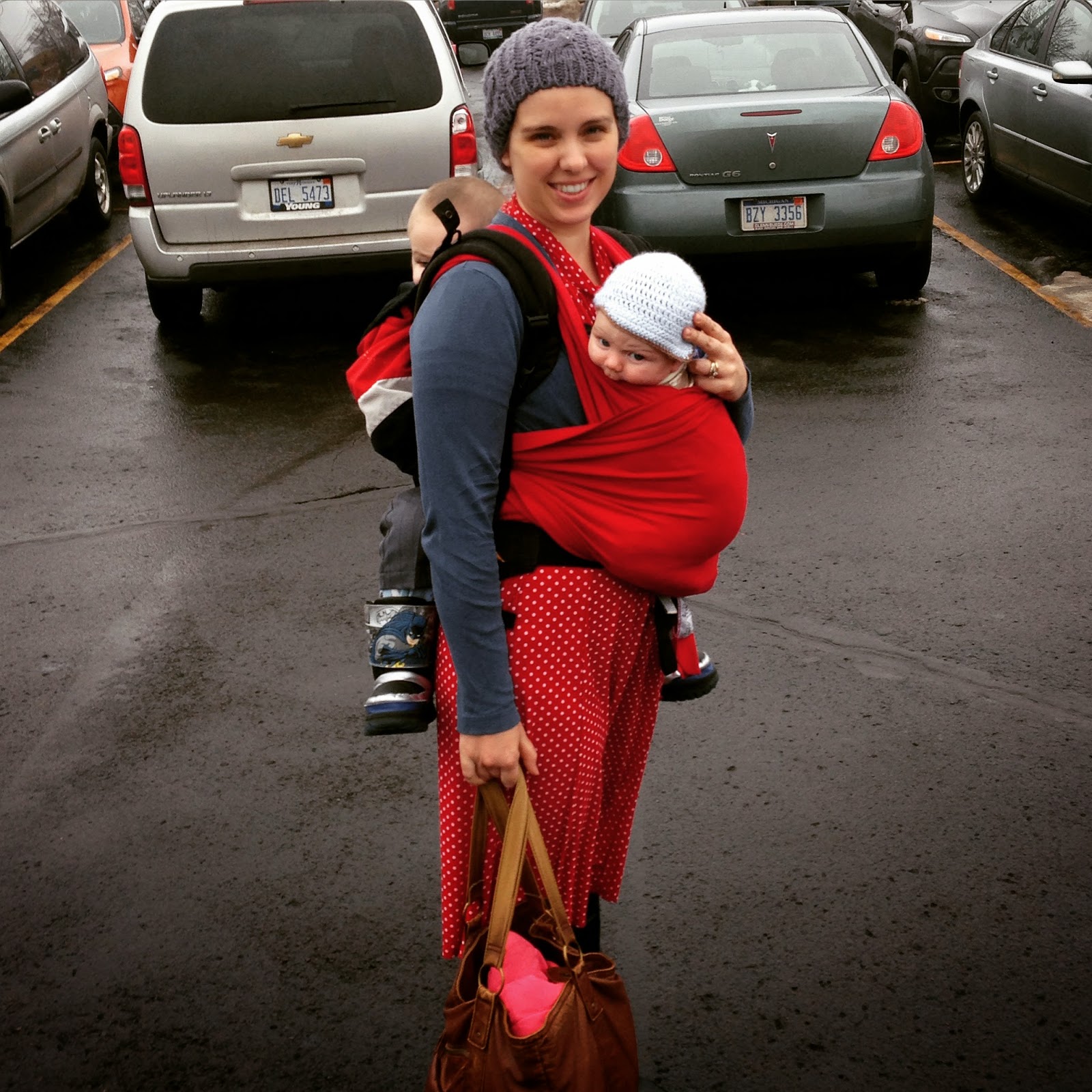 And since this is a What I Wore Sunday post, on to what I actually wore:

.  I wore it with a blue cardigan that I think I got sometime around my sophomore year of high school (so that would be... 1998...).  Patch is in the Ergo Carrier

.  James is chewing on the Moby

in this picture (which is what he spent most of Mass doing).  And keeping my feet dry are my second favorite pair of Hush Puppy boots.

Here's hoping that next week goes a little more smoothly and that everyone makes it thorough until the end of Mass!

For more What I Wore Sunday head over to Fine Linen and Purple!
Posted by Cammie Diane at 3:52 PM