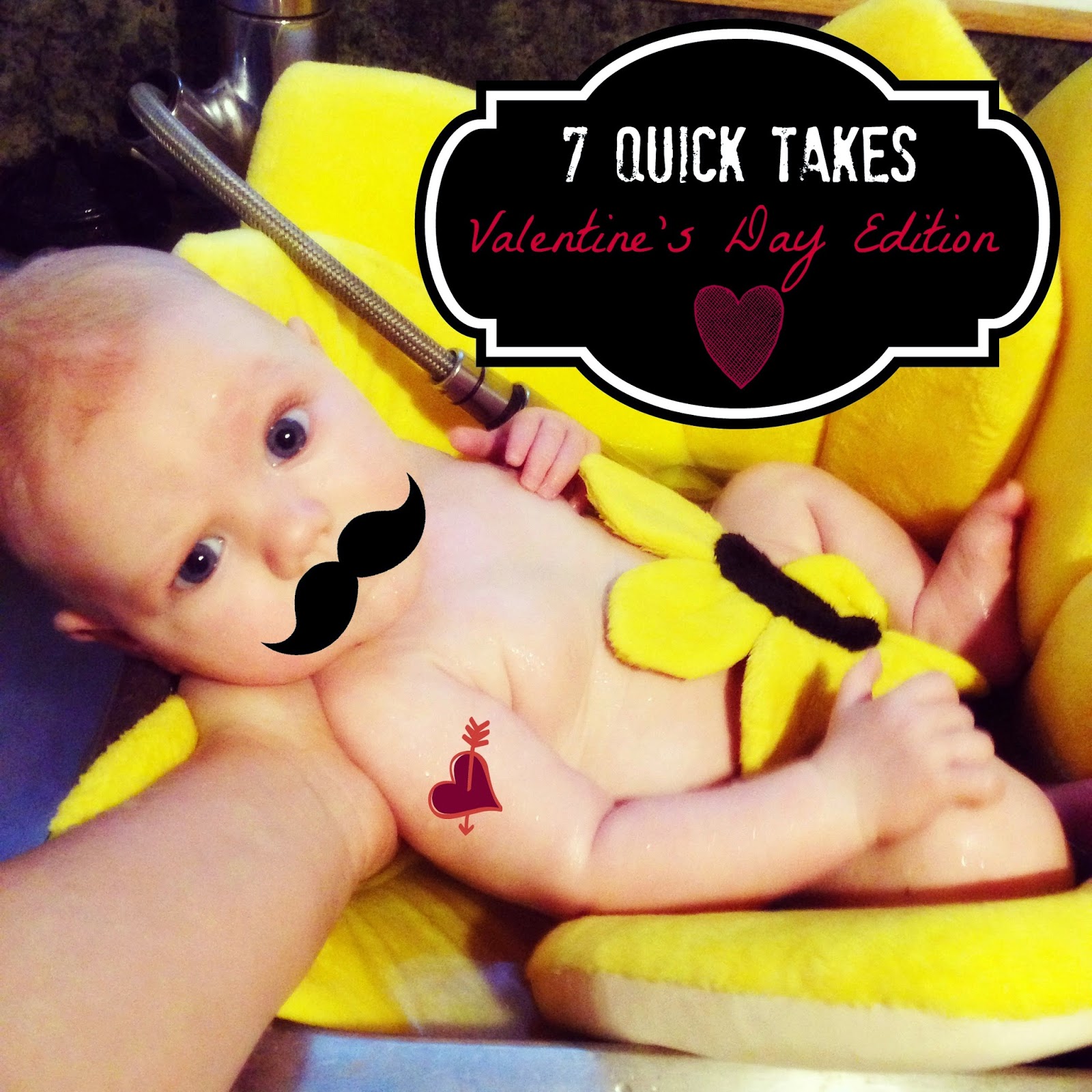 All's well that ends well.  At least that's the case with the doctor's referral that I wrote about trying to get yesterday.

After calling back they actually looked in her file (I found out that while the message said they already had looked in her file, they actually hadn't), and found that there were not one but two OT referrals.  So the nurse found a doctor in the office and explained that we needed a new referral to switch offices (we love her OT, but she had an emergency and is likely to be out for a very long time and they don't have the staff to switch her).

This morning when Sadie and I arrived at OT the receptionist waved me over and scheduled an evaluation for Maggie for the end of this month with Sadie's OT.  And since Sadie is going to be graduating from OT soon Mae will be able to take her spot.

James had his 4 month Well Baby Check today and weighed in at 14 lbs 12 ounces, putting him in the 25th percentile for weight.  On the other hand he'd shot up to 26 inches, which puts him in the 90th percentile for height.  I asked the doctor if she was worried about the drop (because before he was around the 70th for height and weight), but she said that she looked at the actual amount of weight gain and it still looked good. 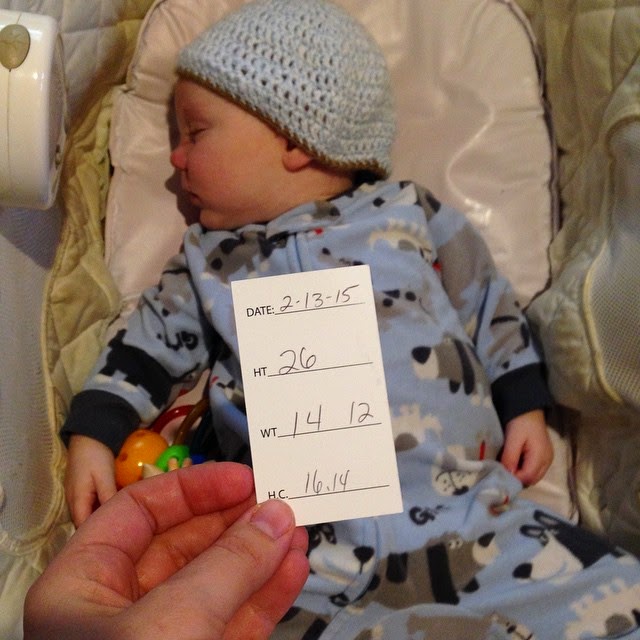 I was kind of shocked that he was only in the 25th percentile for weight because, while he isn't nearly as chubby as the girls were at this age, he definitely has a fair amount of baby roundness on him.

It's become nearly impossible to get a "grumpy" picture of James.  He's become quite the little ham for the camera.

For a while I could sometimes catch a grumpy picture in between smiles.  But now when he sees the camera he pretty much looks like this, as long as it's pointing at him: 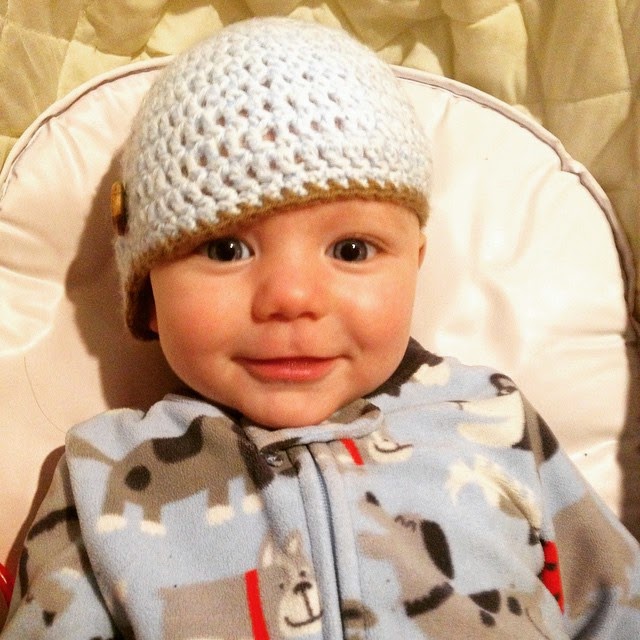 Grumpy Baby has become Smiley Baby... and while I love his smiles I have to admit that I do miss capturing those little disapproving frowns he used to come up with every time he saw my phone!

One of the biggest challenges each morning is keeping Patch away from Maggie's therapy session, and keep him from spending his time trying to steal Sadie's school supplies and distract her from school.  For a long time he kept taking his one nap of the day in the morning, and that worked perfectly, but lately he's been ready to give up that nap.

My solution has been to give him a little snack and set him up working next to me at the table.

And he's been having quite a lot of fun. Yesterday the shapes were his favorite, but today it was definitely the beads: 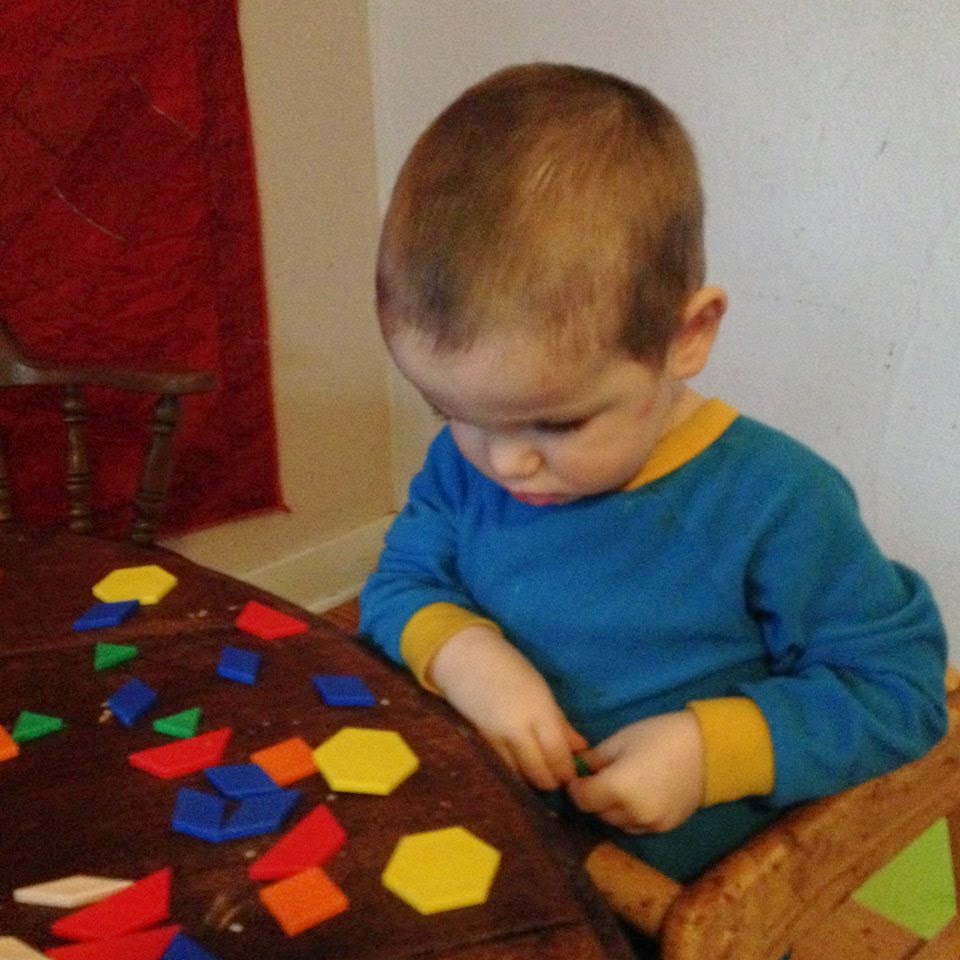 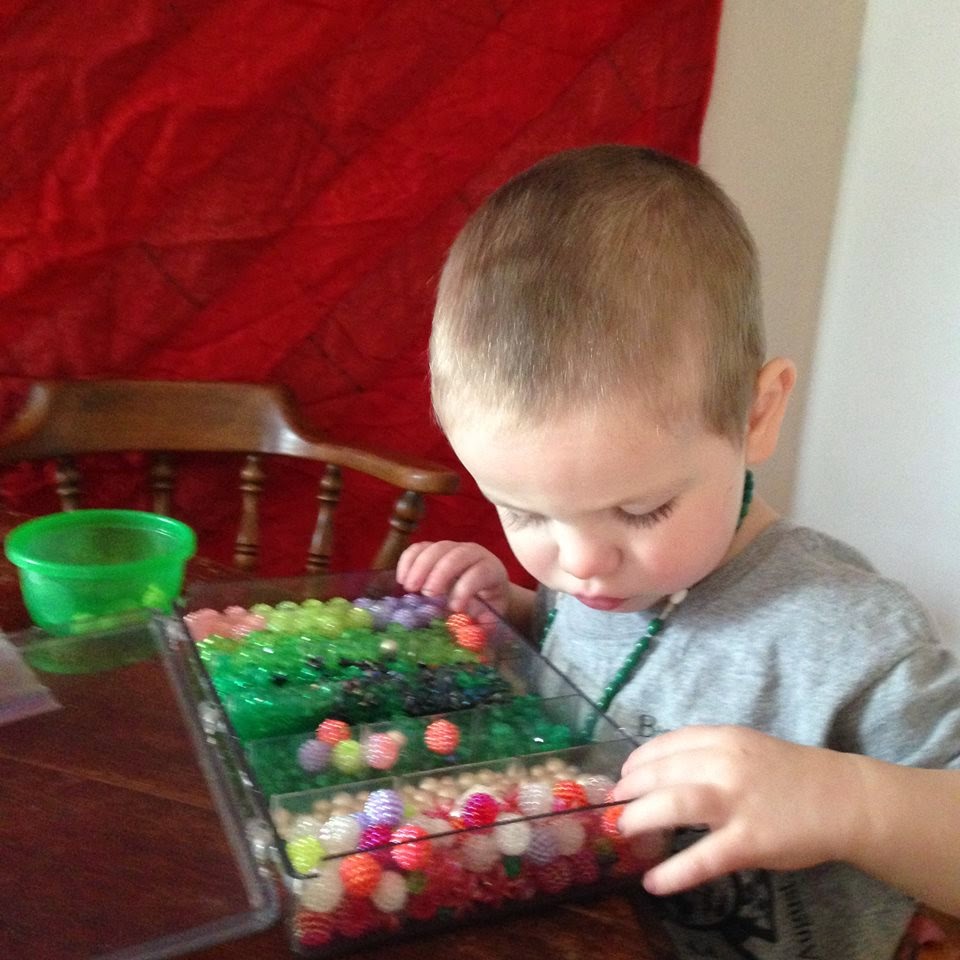 Nine years ago on Valentine's Day, Paul proposed.  He snapped this picture while we were freezing down on the beach waiting for sunset! 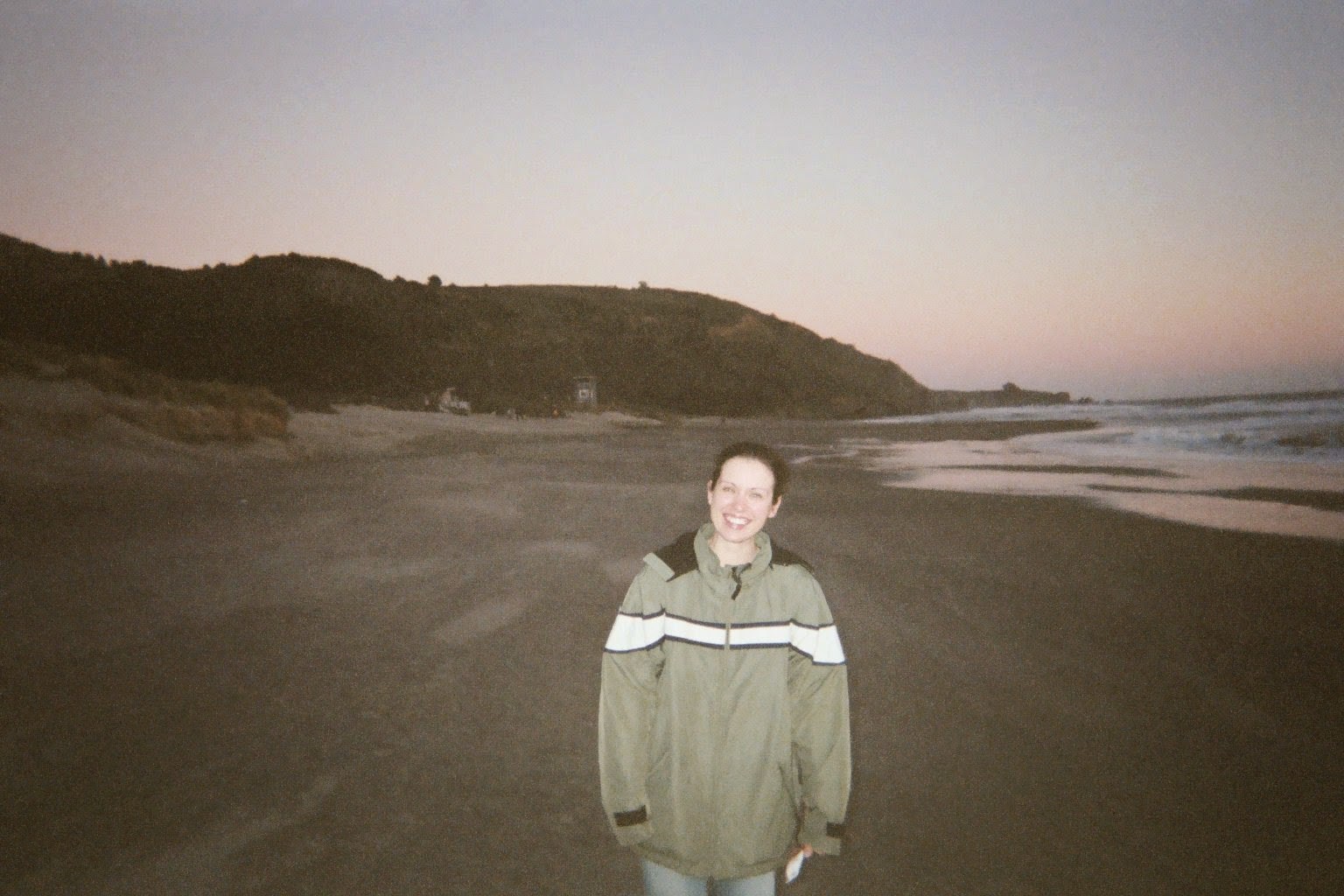 To celebrate today we went out to an early dinner tonight at Paul's work.  Maggie let us know before we left that she needed to go dressed as Olaf. 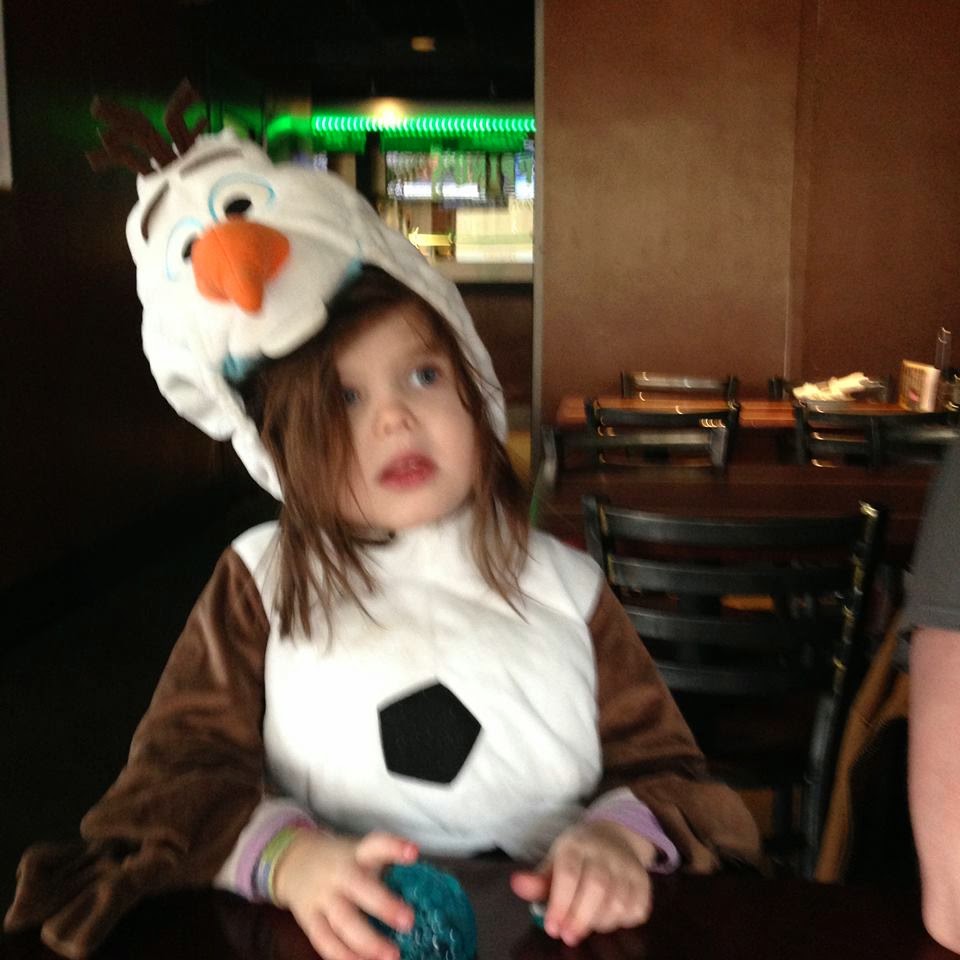 And I snapped this picture of Patch snuggling up to Daddy:

I can't believe how quickly the last nine years have flown by! 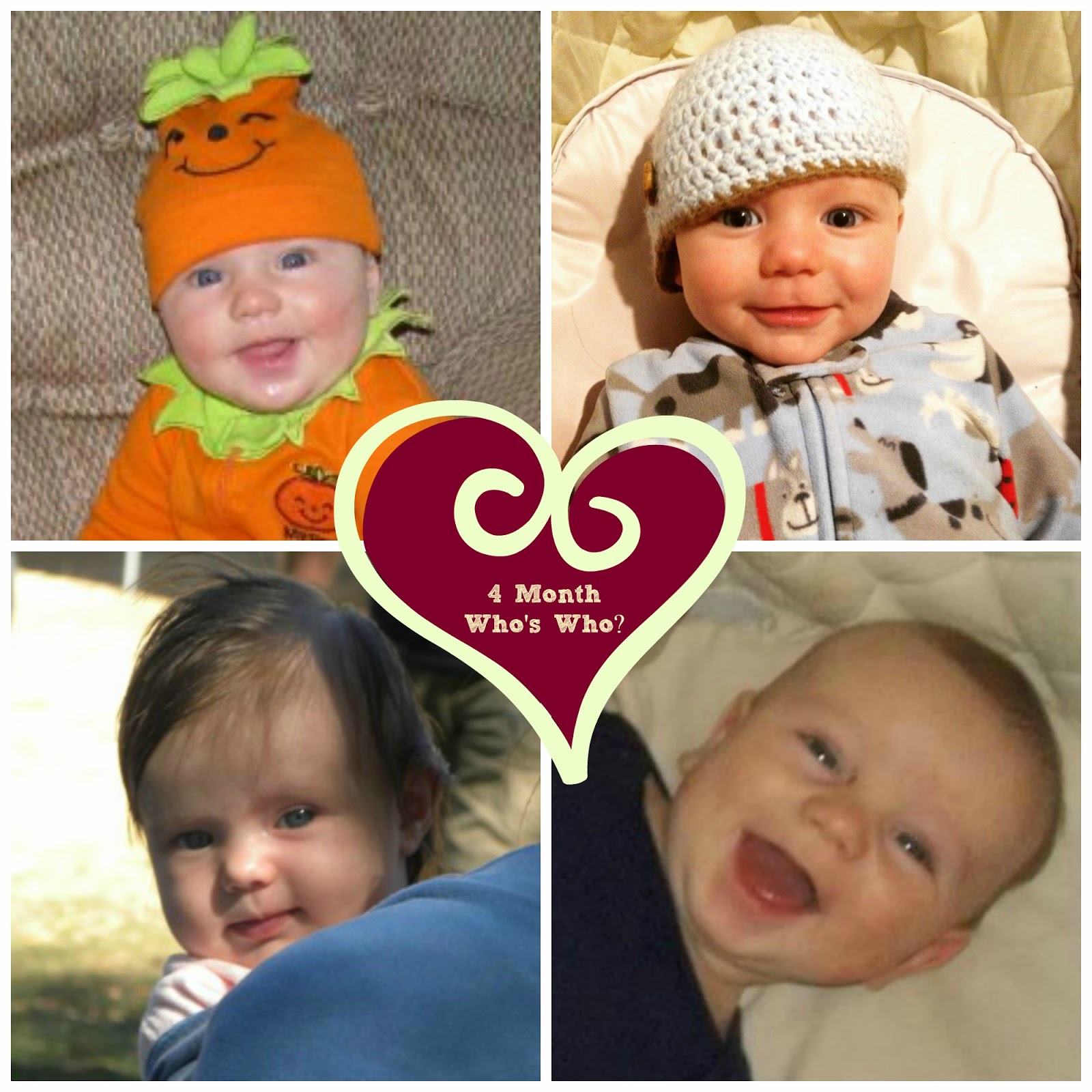 Okay, I think it's pretty obvious who's who in this picture, but I am the mom.  Still, I love comparing their baby pictures from around the same age and so I just had to make one for this month.

And in case you guessed and were wondering if your answers were left, the answers are below (the very bottom part says "from top left, clockwise": 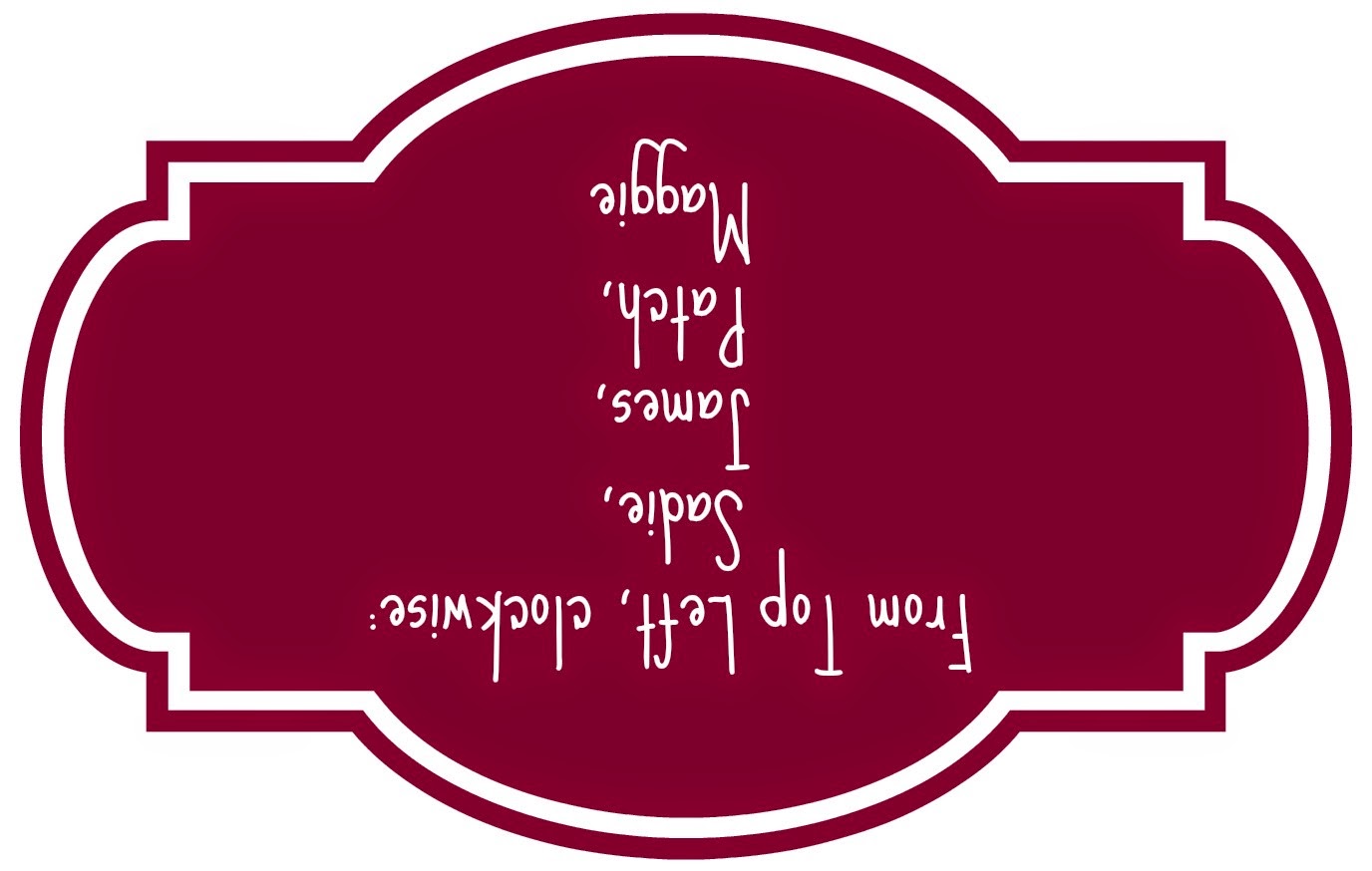 I know I've written quite a bit about Maggie this week, but I had one more moment that I just couldn't resist writing about.

Apparently when she says "surprised" she puts her little hands up to her cheeks to show that she's "surprised."

I'm pretty sure I couldn't possibly love that any more than I do: 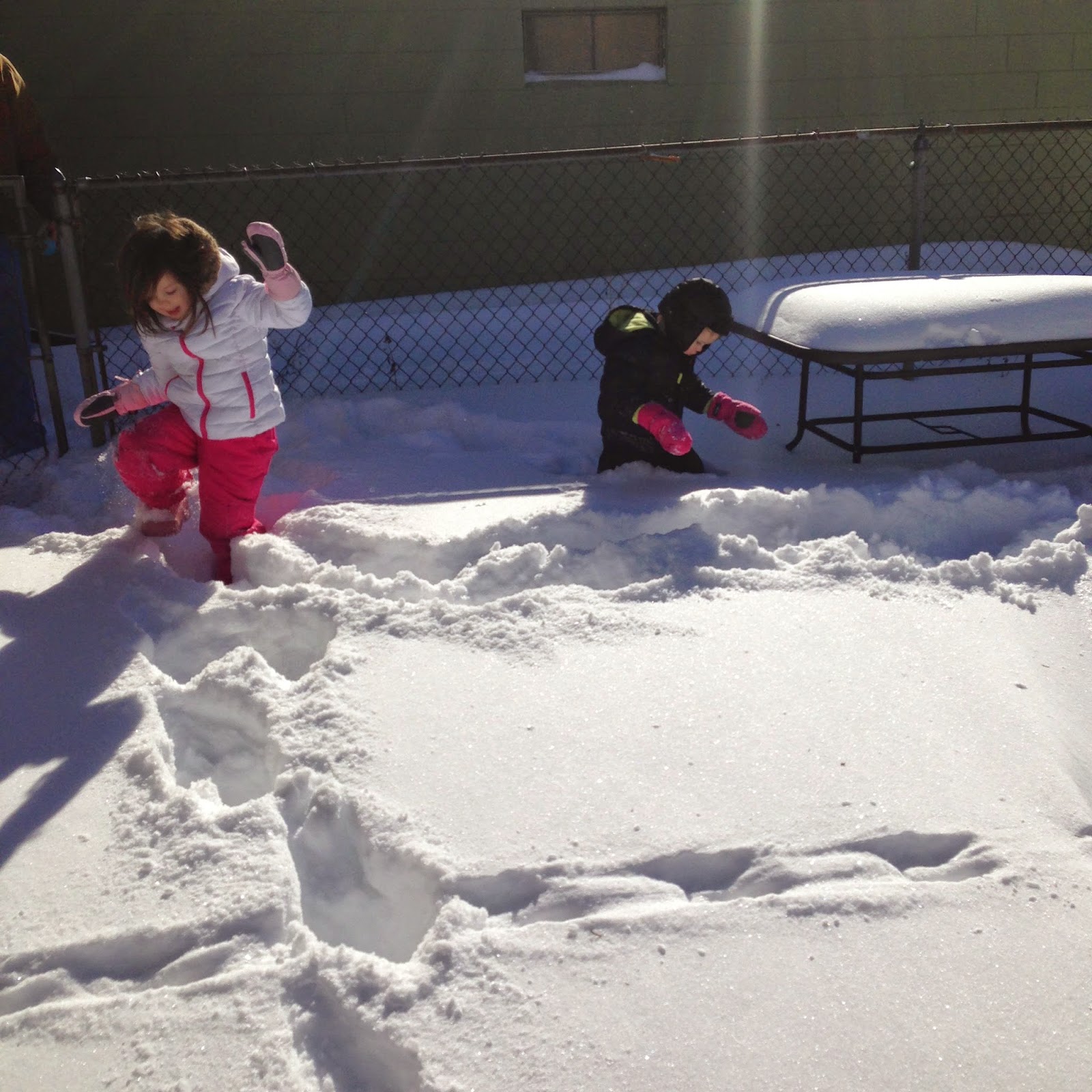 For more Quick Takes head over to visit Kelly at This Ain't the Lyseum.
Posted by Cammie Diane at 10:45 PM