He's Always Good for a Frown

It's been more and more difficult to capture James' frowny faces lately, mostly because he's become such a smiley baby.  Today, however, I felt like I hit the jackpot when I snapped this picture, in between smiles: 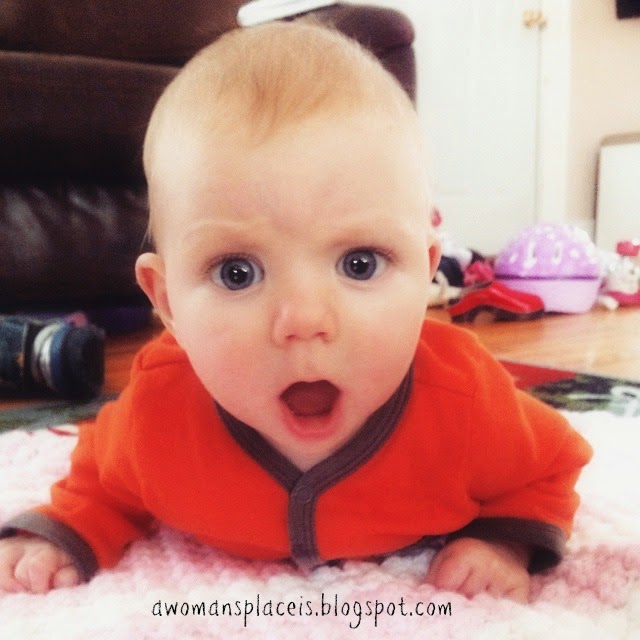 After snapping this I made a little video, which he lay next to me and watched while laughing and loudly "talking" back to the baby in the frame.

This particular photo is inspiring a "4 months old" post tonight, in my oddly quiet house, where everyone is home and everyone else has already been asleep for more than an hour (poor Paul came home from work sick tonight).  I almost titled it "3 months" before counting on my fingers to realize that James is actually 4 months and 1 week old (and then I had to double check, because that can't possibly be right, can it?)... although I know that I knew that he was four months old at some point, roughly a week ago, because he did have his four month doctor's appointment.

But tonight for some reason I started to think he was three months old again, maybe because the fact that he'll be five months old, already, next month, doesn't seem like a real possibility.  And I'll have to file that under Things That Never Would Have Happened with Sadie, since I'm pretty sure that I could have told you exactly how many months old she us all the way up to (and slightly past) her second birthday.  You may note that that particular skill department approximately when Maggie arrived, and hasn't been seen since.

James is now four months old.  His face lights up when he sees Sadie, Maggie, Patch, Daddy or Mommy.  He is still slightly suspicious of the cat (in return, the cat is slightly obsessed with him and would very much like to lay on him, if he wasn't certain that my reaction would be bad).  He thinks he's pretty big now that he can control his head almost all of the time, and his favorite thing to do is sitting on my lap and watching his siblings play.  He's also finally confirmed that he can in fact hear all the commotion in the house and has started to cry when the older kids get too loud (previously he would sleep through just about anything).  His hair still looks slightly reddish, but seems to be getting steadily blonder in most lights. He's in the 90th percentile for height but only the 25th for weight, which baffles me, because last night I realized we were done with 6 month sleepers because I couldn't squeeze his little chubby legs into them any longer.

And that is what's new with James at 4 months.
Posted by Cammie Diane at 9:42 PM