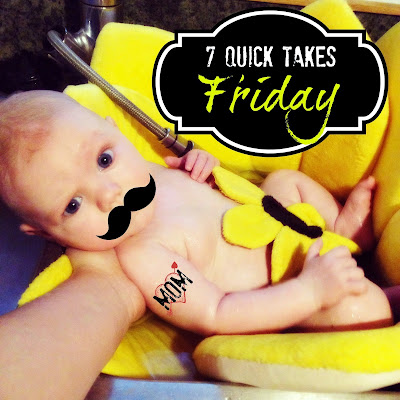 Mae walked up to me yesterday morning holding a peanut butter and jelly sandwich.  She paused and looked at me very seriously making sure she had my attention before taking me hand, touching my index finger to her sandwich and saying "I have... sandwich." 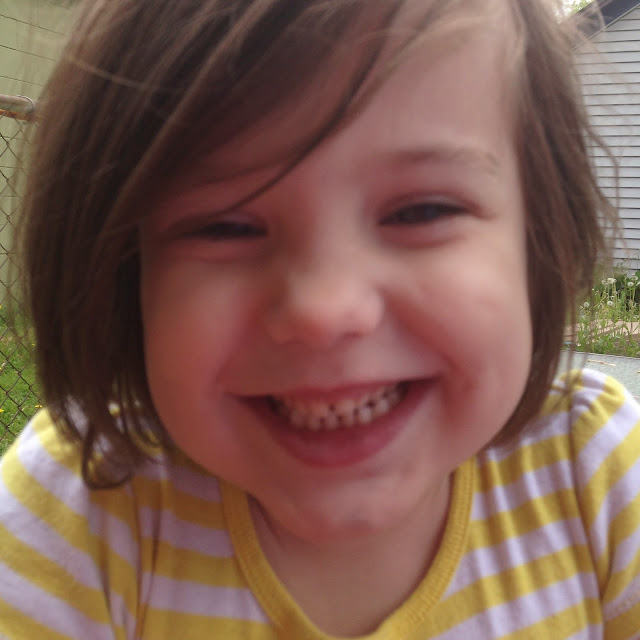 I almost thought I imagined it (I had never, ever heard her say "I have" before).  A pronoun, a verb and a noun were all there and while we may have been missing an article I was still pretty thrilled.

Of course it really isn't just like that.  It's after thousands of hours of therapy and work on Mae's part that just like that she's "suddenly" starting to strings those words together into sentences shortly before her fifth birthday... but all that hard work somehow makes it even more amazing. 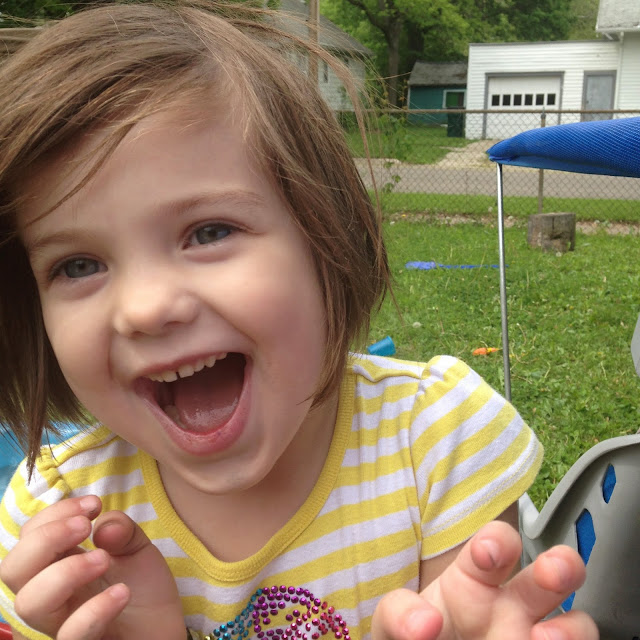 This afternoon her OT came out and told me they'd had an awesome session (which is really good because Thursdays are hard since the office is so busy in the afternoons and it tends to overwhelm her, which is another way of saying she gets really wild and just wants to play).  She said that Maggie spoke pretty much the whole time and that she spent a good portion of therapy singing Happy Birthday.

So the sentences are carrying over into her other therapies and to a small extent into everyday life. 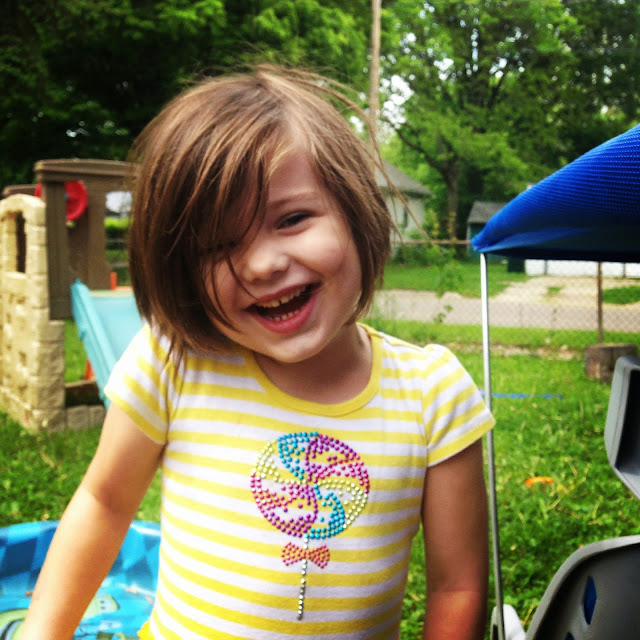 Did I mention that I cut her hair?

I did.  It was of spur of the moment.  I washed it in the sink, because we're going through a terrific fear of washing our hair in the bathtub phase (and I'd rather avoid a general fear of the bath tub) and then brushed it out and decided that it was time for a trim.

I managed to cut it in about six quick snips hoping that it would be somewhat even.

And if there's one thing I can be confident in it's that all of Mae's therapists will tell me they thought it was professionally done rather than asking me if she got a hold of the scissors herself, because they're awesome like that. 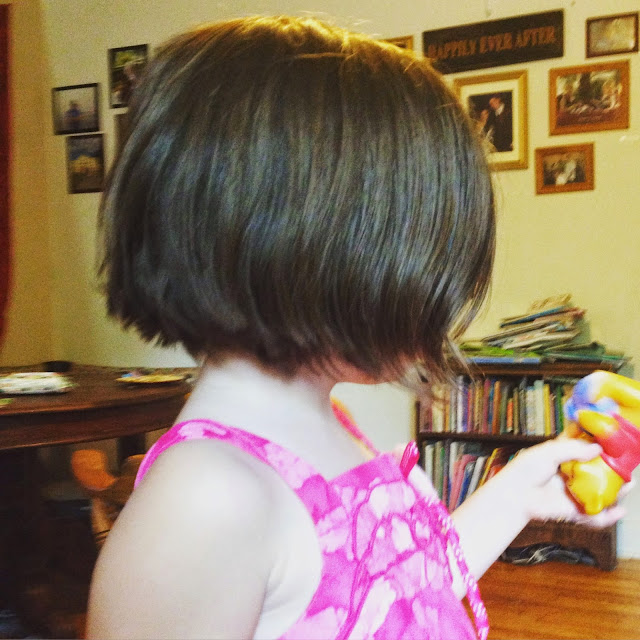 On Wednesday there was a knock at the door in the afternoon and I peeked out the window to see a therapist standing there.  I hurriedly welcomed her in and announced to Patch that it was time for therapy.
It took me a few minutes to realize why the Physical Therapist was looking at me strangely when I said those words, and I quickly grabbed James up off his blanket where he was napping to try to convince him that it was time to do a little work.  It was his therapy session I'd forgotten about, not Patch's.

I'm pretty sure that even with my super calendar and promise to myself to be vigilant about keeping track of all the appointments, I begin to lose track sometime after we hit the three dozen mark and as we approach four dozen appointments in a month things start slipping through the cracks.

At least we haven't actually missed anything.  I've only forgotten about people coming to our house.  It's a good thing most of the sessions are in home. 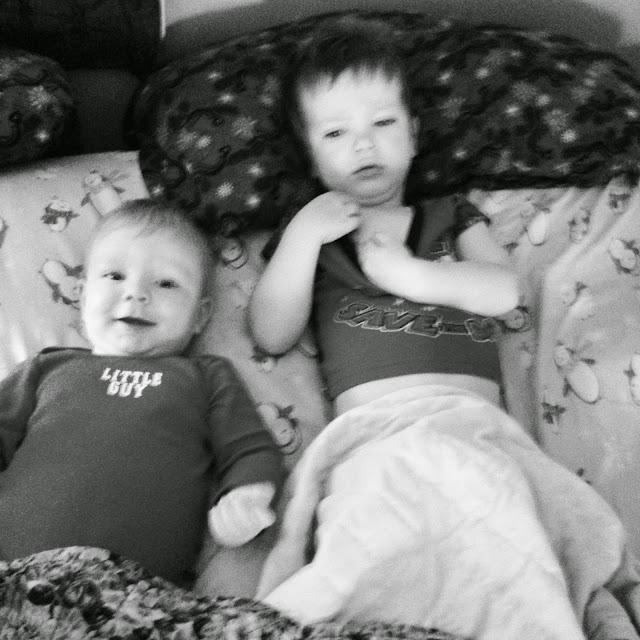 James was not on board with PT at all.  He screamed almost the entire time.

So his therapist went over his plan for the summer with me and showed me exercises to do with him.
He rolls over a lot some days and then seems to totally forget how to roll on other days, but he's still only pushing up to his arm pits and his core muscles are still super floppy (despite mastering looking like a baby airplane).

On of his exercises is to sit on an exercise ball while I move it slightly from side to side.

Last night he was a great sport about the ball for about five minutes.  When he started to get tired and fussy I tried to take him off of it and he hollered like I'd taken his favorite toy away and then hollered when I put him back on it to see if he wanted to do a few more rounds of balancing.  Apparently he already has a love hate relationship with the exercise ball. 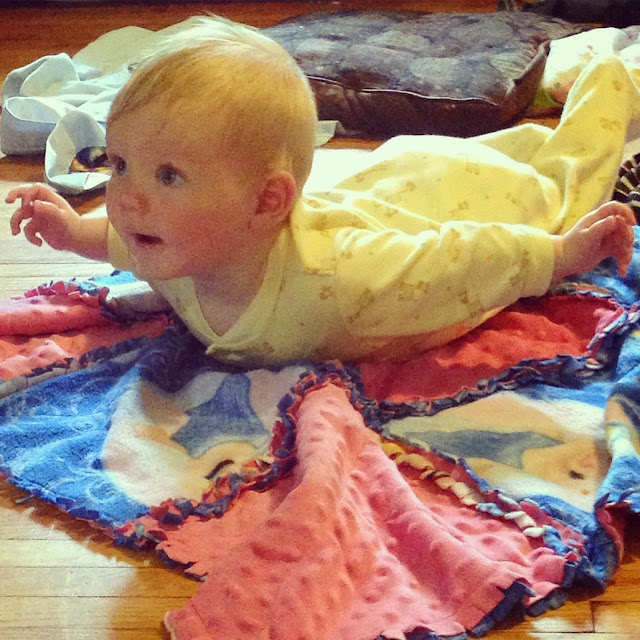 And in other news Patchy somehow got passed all the restrictions I put on Amazon to keep him from buying more episodes of Bubble Guppies and Team Umizoomi and bought another Bubble Guppies collection.

So I guess someone is just going to have to be cut off from playing with the Kindle Fire until they stop charging things on Mommy's account.  At least he's finally fully recovered from whatever virus it was, so I won't need to use it to distract him from how uncomfortable he was any longer.

I have no idea how he does it.  I just know that he is quick and apparently better with electronics than his mom. 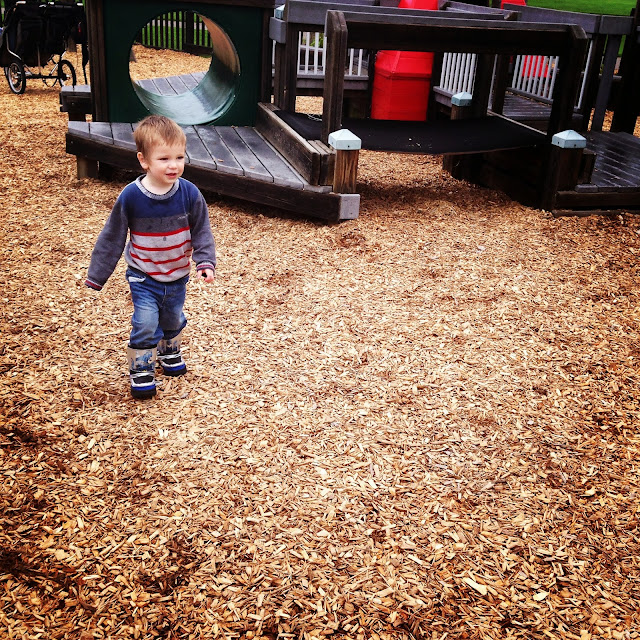 For more 7 Quick Takes head over to This Ain't the Lyceum.
Posted by Cammie Diane at 6:30 AM