Yesterday was picture day at our parish.  We'd signed up for a time slot weeks ago, but somehow those weeks slipped by far too quickly and the day arrived before we knew it.

I have friends who make amazing Pinterest-esque boards when their families get their pictures taken professionally, and I had fleeting moments during the day, as I surveyed various outfits for various family members and tried to picture them together, when I wished that I too was that organized.

But, as you've probably guessed, I'm not.

I was also worried about Mae's reaction to just about anything I picked out.  Should I just let her wear a tutu and hope that the tutu alone would make her happy enough to tolerate the photo session?  Or should I try to convince her to wear the dress that I kept picturing whenever I imagined the perfect family picture in my head.

I posted the question on Facebook and with an hour and a half until picture time I was beginning to imagine the pictures with out little tutu wearing super hero.

While all these thoughts were bouncing around in my head I asked Sadie which dress she would like to wear.  She picked a fancy white beaded dress (that was surely intended to be a first communion dress) and I told her that we should wait to put it on at the last minute. 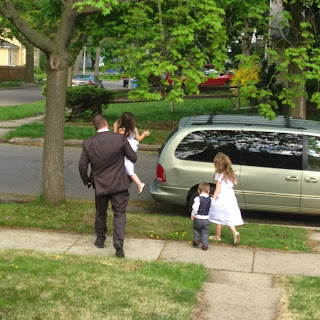 The next thing I knew Maggie was doing her best to reach the other dress I'd brought out for Sadie and was putting it on.  She then went to the closet and found a pair of her sister's shoes and began strutting around the house in them.

The dress was perfect and I brought out a pair of gold sparkling shoes I'd found in the basement (that will finally fit her) and she quickly grabbed them and put them on.  The next thing I knew the pink princess dress was on the ground and Mae was surveying the play room for something else to wear.

Maggie is very particular about which outfits match which shoes and apparently she didn't think that a pink dress matched her gold shoes.

I ran downstairs and grabbed the dress I had in mind.  It was a white dress that Sadie wore at Easter a few years ago that would fit Maggie now.  When I brought it into the room she grabbed it and put it on.

We went to our parish and the photographer did his darnedest to get all of the kids to smile at the same time.  He told me afterwards that it took all of the skills he'd acquired in his 18 years as a photographer to get a handful of pictures where everyone was looking at the camera.

I thought he was a genius because not only were we all looking at the camera, but no one was crying in all five of those pictures.

We sat down afterwards and picked the picture for the directory.  In it Sadie is smiling.  Patch is laughing.  Maggie's head is tilted sweetly to one side, and while she's not quite smiling, her expression is sweet.  James is looking suspiciously at the bear puppet that the photographer is holding and is refusing to so much as crack a smile.

We ordered a few pictures and went on our way, declaring the day a success.

When we got home any suggestions to put on pajamas were met with tears.  The white Easter dress of 2012 with matching gold glitter shoes is apparently Mae's outfit of choice at this moment.

Paul shrugged and asked if it was worth fighting over and a few minutes later he tucked her into bed in her new white dress and gold shoes.  I guess I'm going to need to find some pretty awesome pajamas if they're going to compare with that white dress.

And they'll probably need to match the gold shoes too.