When the girls were tiny I read every parenting magazine that I could get my hands on from cover to cover.  And oftentimes in those magazines there would be articles about autism.  More often than not those articles would site "Seven Signs of Autism" that parents needed to be on the lookout for.

In part these Seven Signs are exactly why I was so surprised when Mae's doctor spent forty five minutes with her and told me that she was certain that she was autistic.

You see I'd read this list over and over again and they weren't Maggie.  They never Maggie.  She not only hit these milestones but we never had any regressions.  She hit many of milestones early (especially anything involving gross motor skills).  Looking back I can see that she kept on developing, just not in a neurotypical way.

Still I wanted to look back over the lists that I remembered reading to be certain.  Here's the big 7:

And I thought I'd go through them one by one to share how different our experience was from the "Seven Signs."

By 6 months: No Big Smiles or other warm, joyful expressions.

At six months Maggie was already our smiley girl.  I think it's safe to say she was a pretty joyful baby.  She was undoubtedly one of the easiest babies to care for and was happy most of the time.

Here she is at around four months: 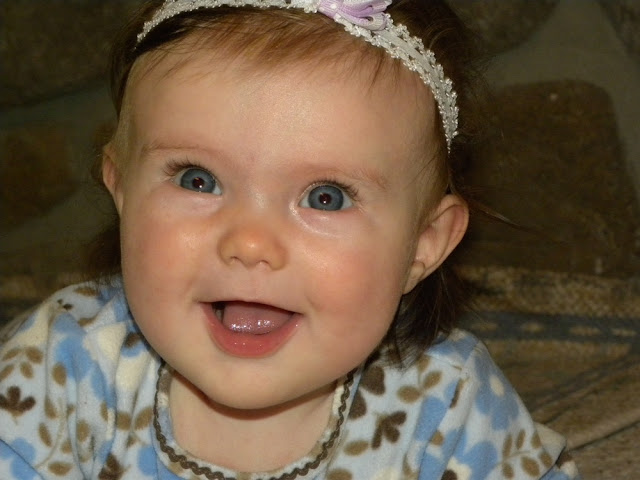 And here she is at six months: 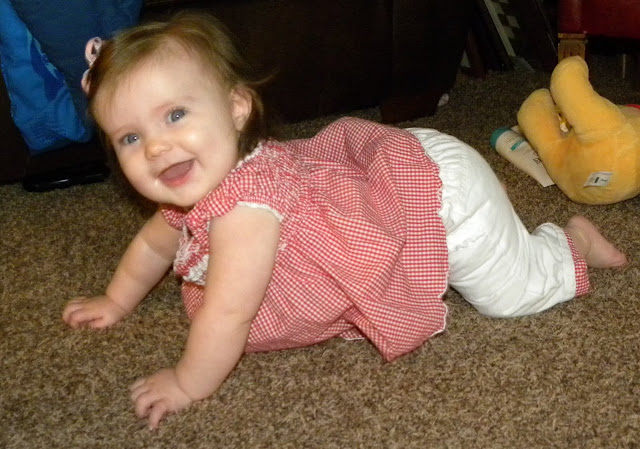 By 9 months: No back-and-forth sharing of sounds, smiles, or other facial expressions.

By nine months she was cooing and squealing and giggling and interacting with others.

I actually shot this video at three months:

And here she is interacting with Santa at the hardware store at five months: 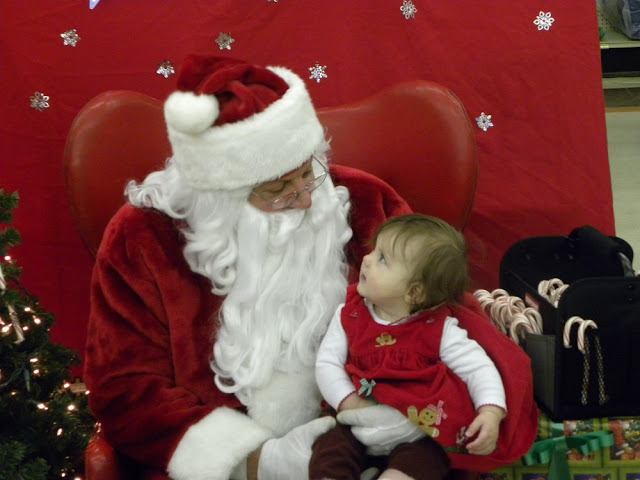 And just being her smiley, giggly self around six months old: 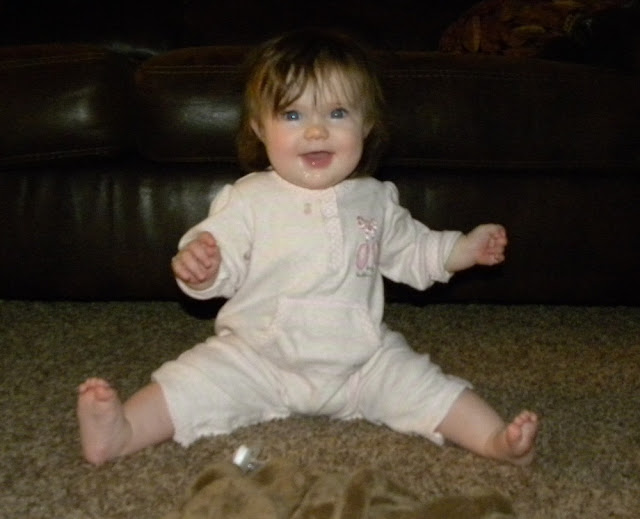 By 12 months: Lack of response to name.

I never noticed her not responding to her name or to being spoken to. Like all of our toddlers there were times when I'd say something (like "stop") and she'd do the opposite, but other than that I saw no indications that worried me on this front. 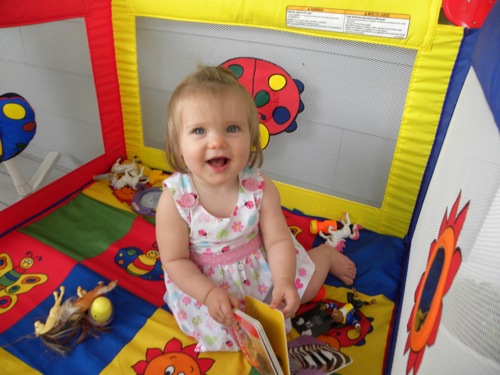 By Mae's first birthday things seemed right on track.  She was making sounds and "talking" and interacting with everyone around her.  She called Paul "Ba." 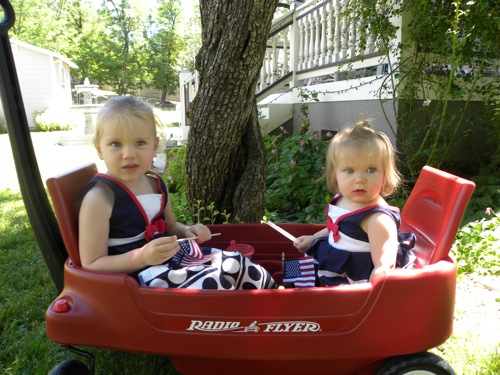 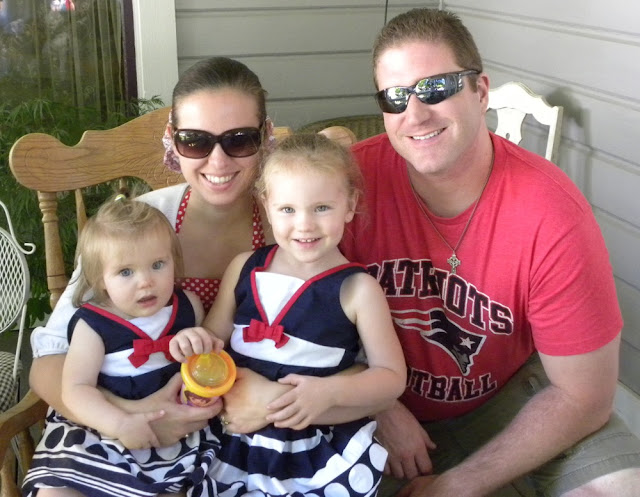 By 12 months: No back-and-forth gestures, such as pointing, showing, reaching, or waving.

There was pointing and reaching (oh so much reaching!), showing (I think this falls under pointing too, although Mae was always good at taking my hand and showing me exactly what she wanted) and waving.  There was even clapping: 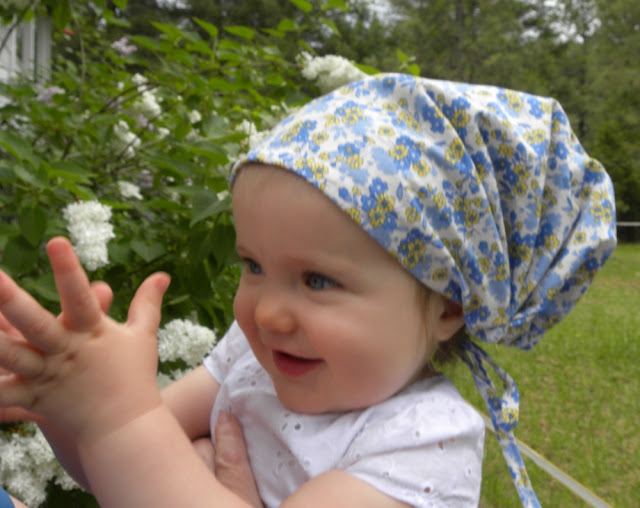 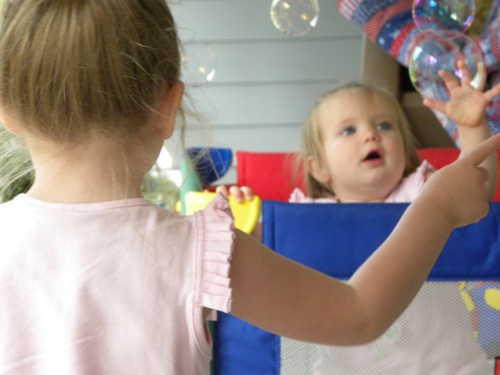 And sometimes there was even sweeping of the floor: 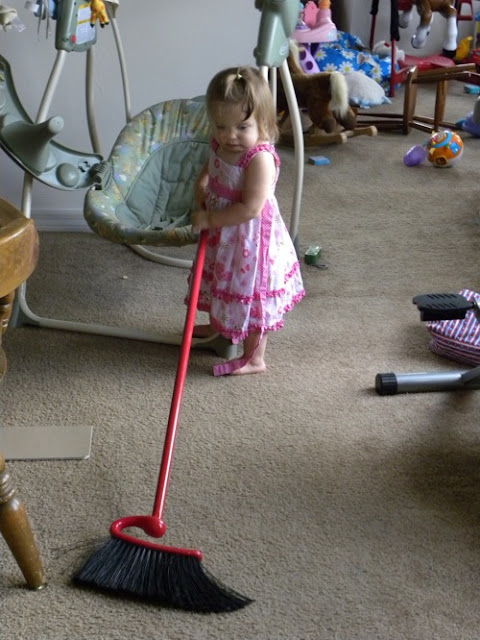 By 16 months: No spoken words.

Maggie had some words.  Not a lot, but they weren't completely absent.  I would hear her talking to "Oatmeal Bear" in her room on the baby monitor and occasionally there would be full sentences before we left Florida (which we did when she was 22 months old). 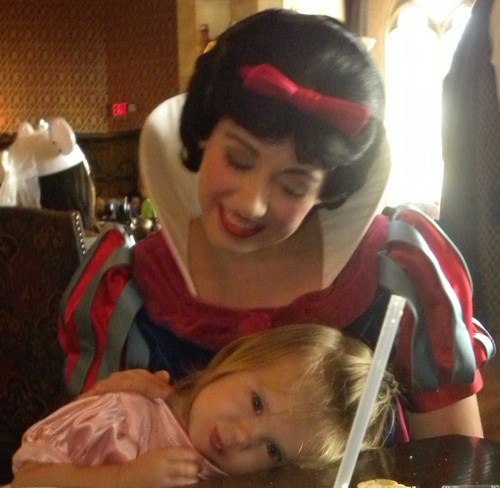 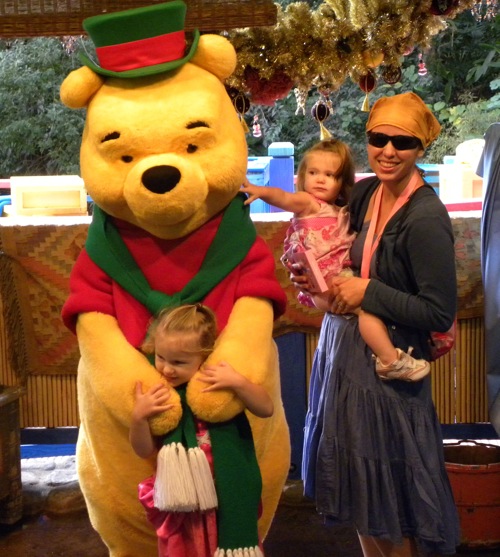 By 24 months: No meaningful two-word phrases that don’t involve imitating or repeating.

Since I'd heard her having conversations with Oatmeal Bear in her bedroom I was't really worried about this one.  She'd also started saying "Good Ma" when I gave her something she wanted and "good girl" when she was doing something she knew she wasn't supposed to be doing.  If she was mad at Sadie she's say "bad girl, bad girl!" to let her sister know how she felt.

And there was the infamous meal when I served her sweet potato porridge and she responded by saying "Bad Ma, Bad Ma, I want oatbear!" (which we were pretty sure meant that she wanted pumpkin oatmeal, which I'd been serving a lot at the time). 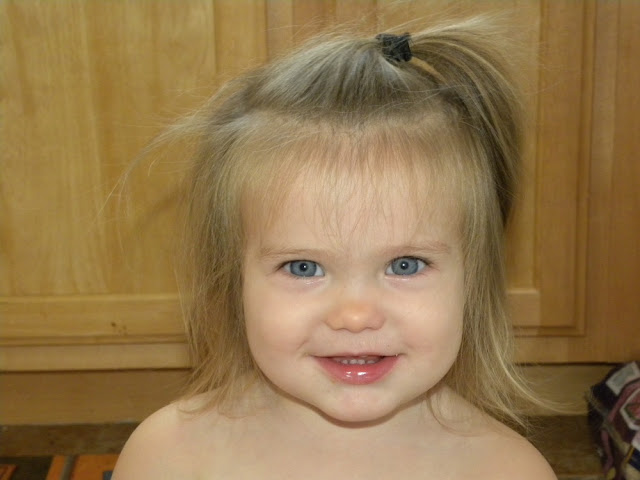 So the Seven Signs of Autism that were so widely touted weren't really relevant for us at all.  Even some of the later "red flags" that are usually brought up weren't apparent.   I've never seen her "flapping."  I have a child who flaps, and as a result she's repeatedly been tested for autism and the tests all come back saying she isn't on the spectrum.  Actually when I get super excited I've caught myself flapping my arms, which always makes me laugh since of the three girls in the house Mae is the only one who doesn't flap.

Another "red flag" that I see on other lists is lining things up.  She does this sometimes now, but I saw it rarely starting when she was four and it's only beginning to increase a bit more now that she's almost five.  She started with pumpkins last October.  Sometimes she lines up pretzels.  And two days ago I caught her removing all the ice from her cup of ice water (she loves ice water) and lining them up on the table.  But lining things up definitely wasn't on our radar until long after her diagnosis.

Repeating words is another "sign" that comes up.  As with flapping I have a kid who does this... and if I had to guess I'd say he's the most neurotypical of my kids.  He's just learning to talk and he loves repeating the last word in just about any sentence he's heard and laughing hysterically about it.

Toe walking is another one that we just never saw.  Mae's gross motor skills were, if anything, extraordinary from the time she was tiny.

I've saved one of the biggest "red flags" for last.  Not making eye contact is frequently touted as one of the biggest signs of autism.  I never saw it.  She's never avoided eye contact with family members and actually, because her verbal communication is limited, she's pretty intentional about making sure I'm looking back into her eyes when she wants something.

In a way all those articles that told me what autism "was" kept me from getting help for her sooner. After all, Mae didn't have any of those signs.  Looking back I see red flags galore, but they weren't the signs that anyone was talking about when I was reading all those terrifying articles.  And that is one of the reasons why the doctor's words came as such a complete and total shock when she told me she was 100% certain that Maggie was autistic.

It's good to have information and things to look for, but making any definitive list of what autism is, is pretty much impossible, because just as every single person in the neurotypical world is unique, every person on the spectrum is unique as well and while they likely have many things in common with each other (and you and me), I find that, at least in our case, the Seven Signs of Autism fell far short of even beginning to describe our experience.

Tomorrow I'm planning to post on the signs that we did see that might have led us to talk to our doctor if they were as widely mentioned at the Seven Signs.
Posted by Cammie Diane at 8:23 AM