The Floppy Baby gets Evaluated 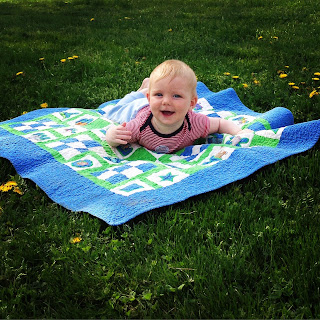 Today was James' big day.  A physical therapist from Early On came by the house to evaluate him.

She asked lots of questions and ran through the list of things he should be able to do right now with us.  He'll be seven months old tomorrow and we were going through the six month list.

He's been spending most of his days in tummy time lately.  And little by little he's been getting stronger. But even with all the time we've spent coaxing him to push up or helping him try to sit on his own and even though he put a tiny bit of weight on his legs (and has been for about four days) he still was definitely behind in the gross motor department.

I didn't expect all the other delays that popped up in the results though.

The numbers showed a 21% delay (for a six month old!) in gross and fine motor skills, speech and social communication.  If she factored in the fact that he can say "mama" (and does frequently) it should bump him up out of the speech delay (but he still falls short on the actual list of things a six month old should do).

The social communication part was really the only portion that came as a shock to me.  He's such a social baby.  He has that I'm-the-fourth-kid thing going on where any person smiles at him (or so much as glances in his general direction) and he turns the hammy-ness factor way, way up and giggles and smiles and coos up a storm and acts like every person who speaks to him is the most important person in the world.  He makes eye contact and follows people when they cross the room with his eyes. 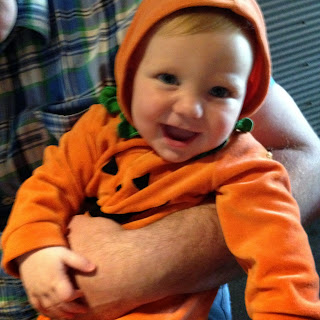 But he is super floppy.  His arms and legs are fairly strong, but he has low tone in his trunk, which is why he tips over when he sits, even in a high chair (which is Goal #1... to be able to sit in a high chair to make meal times much, much easier when I'm trying to offer him food...).  Goal #2 is to be able to pick up small things with his hands.

I'm not worried. I'm glad we're starting physical therapy early.  I'd rather have a few PT sessions now and learn things that can help him get stronger in hopes that maybe we'll miss having a whole lot of therapy sessions down the road.

In other kind-of-but-not-really related news, Sadie is graduating from OT at the end of this month!  So that's one less appointment to fit into the mess that is my calendar (although if we ever get her into Speech that will fill in that point so I guess I should hold off on celebrating just yet).

Now to learn more about the wonderful world of baby PT and hopefully before long our little guy will feel a little less floppy when I'm holding him.

And if you're worried about your own little one (or are just curious about the ASQ and what it's like Oregon has an awesome website where you fill out the ASQ online and they actually give you the results and tell you if there's a possible delay to talk to your doctor about.
Posted by Cammie Diane at 1:44 PM