I really can hardly believe we made it today!  It's my last scheduled doctor's appointment before the scheduled c-section!

And the contractions, after weeks and weeks of being painful, have seem to have gone back to just regular non-painful pre-baby contractions.  It's a kind of lovely change.

I haven't tested it by walking a distance more than from a parking lot to a doctor's office because I'm fairly sure it wouldn't last, but as far as walking little tiny distances, at least for the last few days, I've been good!

Baby just has to stay put for three more days and we'll have made it!

Yesterday while standing in line at the manipulative medicine place I heard the receptionist say to the woman in front of me: "Well, how about we make your appointment at 11 instead?  That way it will be a little later in case it snows that morning."

And my brain shouted "Wait!  Wait!  Please tell me your scheduling an appointment for December!"

However, I just checked the temperature on my computer and my computer claims that it's 37 degrees outside at the moment with an expected low of 33... so it does look like we're inching in that direction.

Does it not feel like last winter ended... oh I don't know... about five minutes ago? 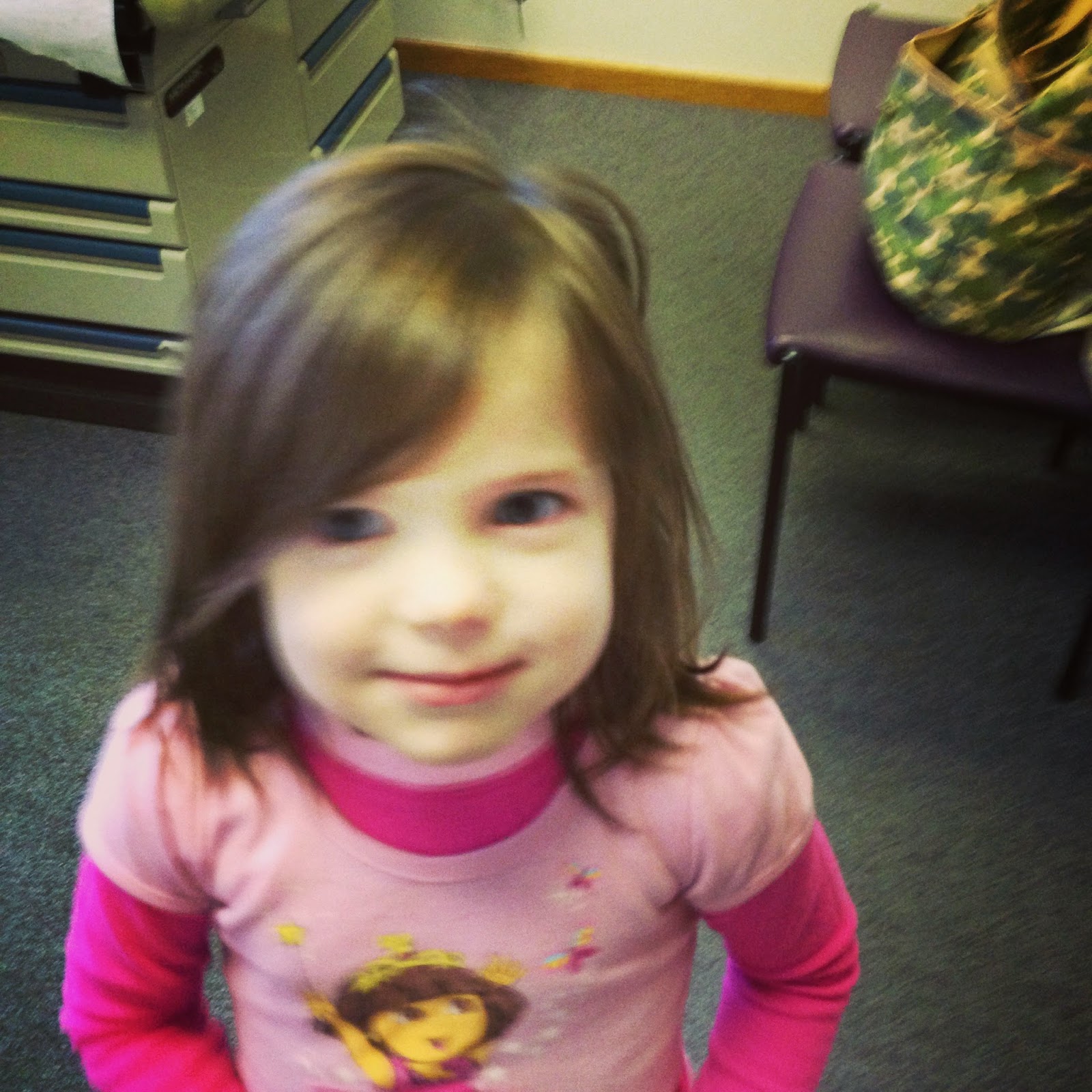 I think we've finally found the doctor I'll be requesting for Mae at the practice we go to!  She spent around a half an hour with us asking questions and then googling and learning about autism service dogs and then went over the application for Mae carefully with me, answering the questions and showing me her answers in case I thought anything should be added (since she hasn't spent that much time with Mae) before leaving the room and coming back in and saying that she wasn't going to bill us for an appointment because all she'd done was answer questions.

And she's really good with Mae.

Since our old doctor at the practice relocated and the next one that Mae was seen by asked me what OT (and ABA) were I was a little nervous and had thought we might need to transfer to a developmental pediatrician who had a little more basic knowledge of autism, but after this appointment I think we may have found a good fit! 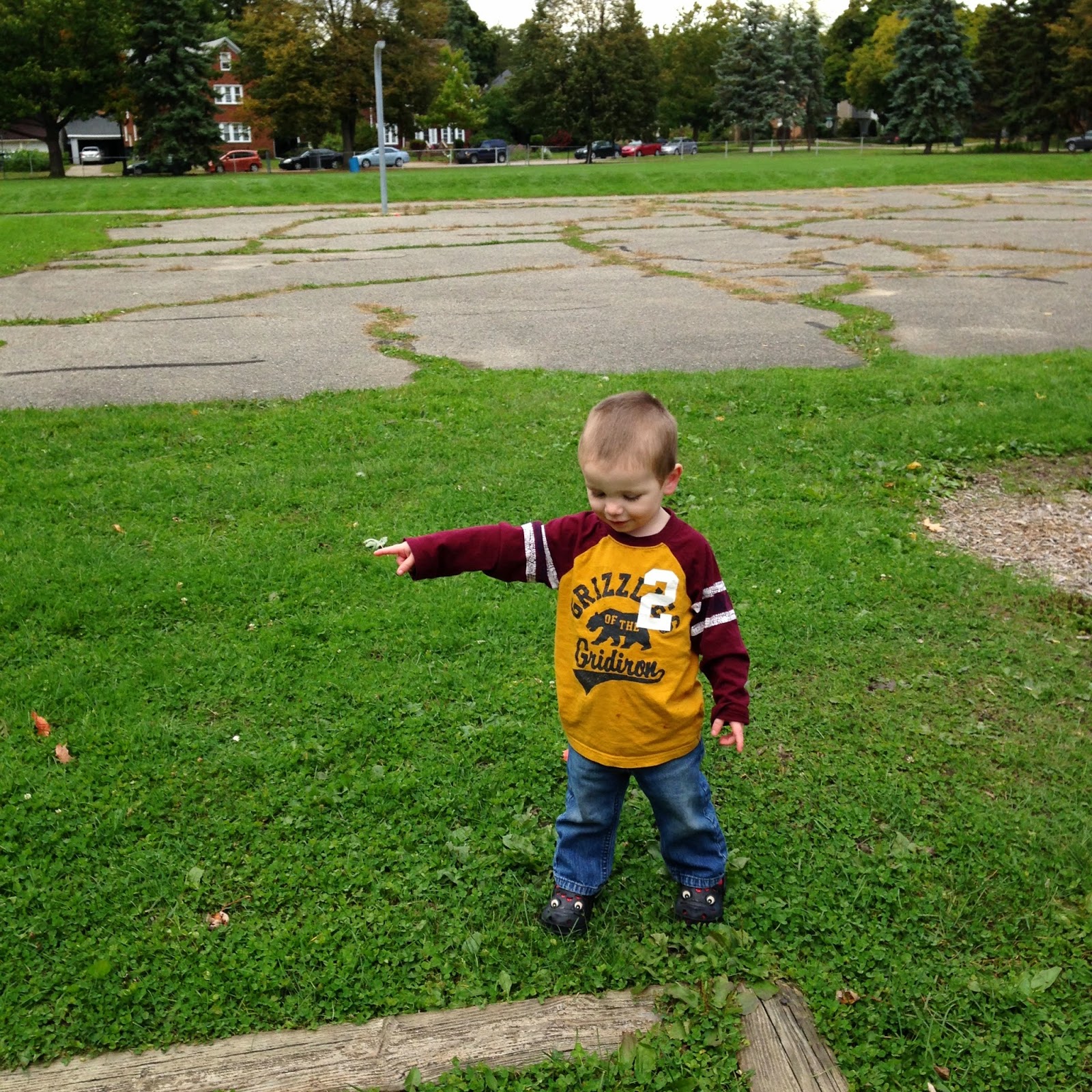 One difference between Patch and our girls.  When he shouts "Huggies!" and runs at you it's kind of like being attacked by a really cuddly monkey.  Patchy's little boy cuddles are a lot more like wrestling than his sisters' ever were.  He's just so much more rough and tumble (and saying that is saying a lot since he's following in Mae's footsteps and "gentle" isn't really a word I would use to describe her).

Note to self:  Go to the store today to get more "lining up" pumpkins for Mae.  After two weeks of serious pumpkin lining up our little pumpkins are starting to look more than a little ragged.  They may have "disappeared" last night.  They definitely need to be replaced today.  Hopefully no one small and in love with all things pumpkin will have noticed.

Paul may or may not have received a text message while at the gym asking him to contact me before he came home.

The reason for the requested call may have been so I could send him to Meijer to pick up oatmeal cookies on the way home.

You know.  For the baby.

After two years one of the broken windows is finally fixed!  I'm hoping this means a lessening of the mouse situation we had last winter (especially since our awesome mouser seems less interested in mice these days... I caught him hanging out with two mice in the kitchen... instead of catching a mouse a day like he was when he first moved in...)... at least it ought to be easier to heat the house this year.

Which brings me to the last part of my check list.  Winterize the house this weekend and put plastic over the windows before it really starts to get cold!


For more Quick Takes, visit Conversion Diary!
Posted by Cammie Diane at 7:57 AM