7 Quick Takes Friday: Blooming Baths, Ballerinas and the First Snow of the Year

Sadie is definitely my helper, especially these last few months.  But there was one thing she was desperate to help me with last night.  And so she I helped her put on one of the terry cloth aprons that I made a couple of years ago and we got the sink all set up for James' very first bath: One of the few baby things that I purchased during this pregnancy was a flower bath that I first saw shortly after Patch was born was the Blooming Bath.  When I saw it on Zulily (it's not there at the moment, unfortunately)

we'd just found out that I was pregnant and I quickly snapped up a yellow one.

In our house most baby baths happen in the sink.  There isn't a bathroom on the ground floor and I usually find a moment during the day to give the baby a bath when the kids are still awake and hauling him upstairs to set up a bath tub isn't exactly practical and so the sink it is.  For this reason Patch's baths tended to look like this: 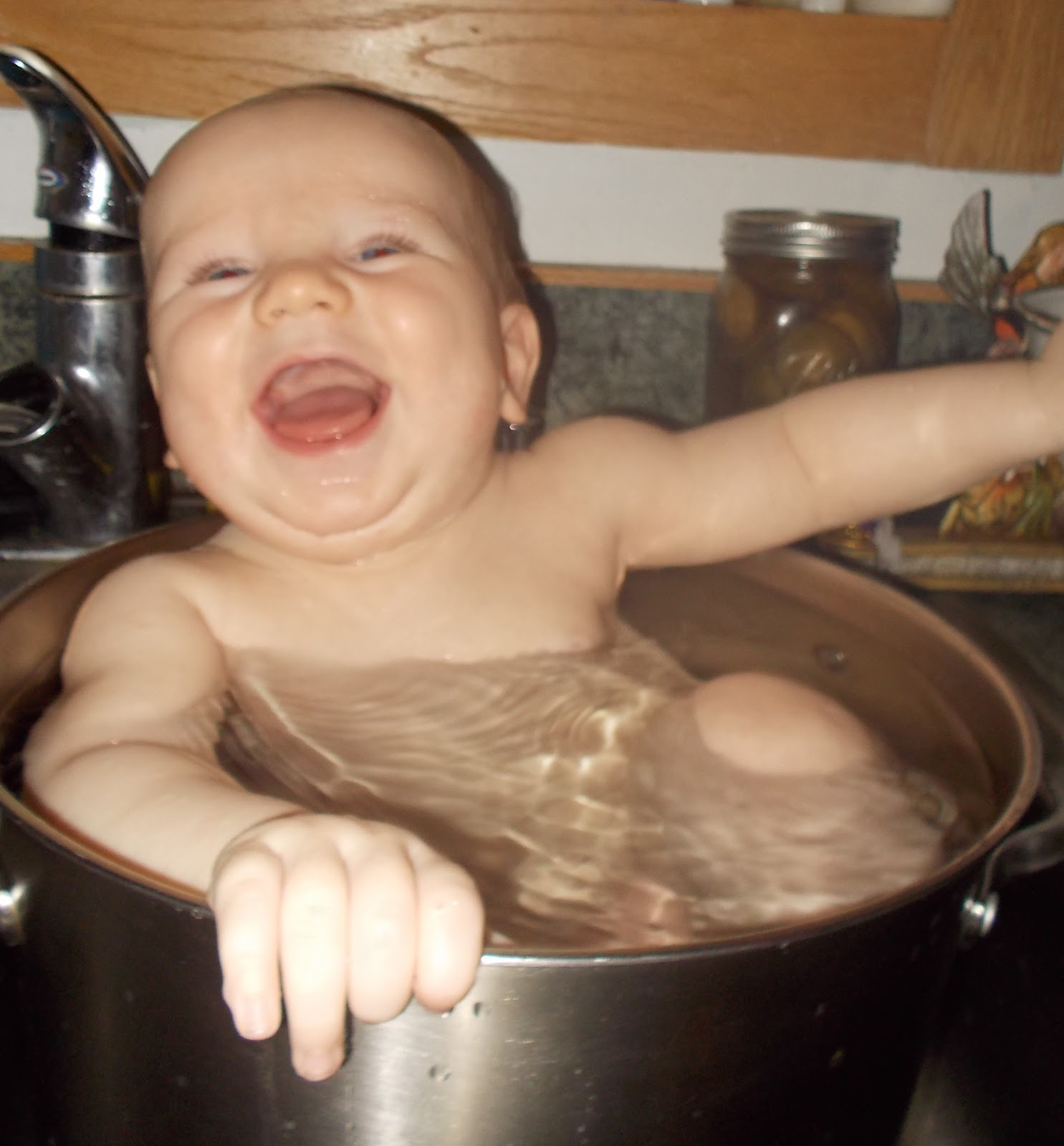 However when he was tiny he really didn't like the cold edge of the metal sink touching his skin and so the flower was the perfect solution for us.  And I have to say I am definitely a fan of the flower.  It was our most successful first baby bath ever.  He didn't even scream the entire time, which is how most of our first baths have gone: 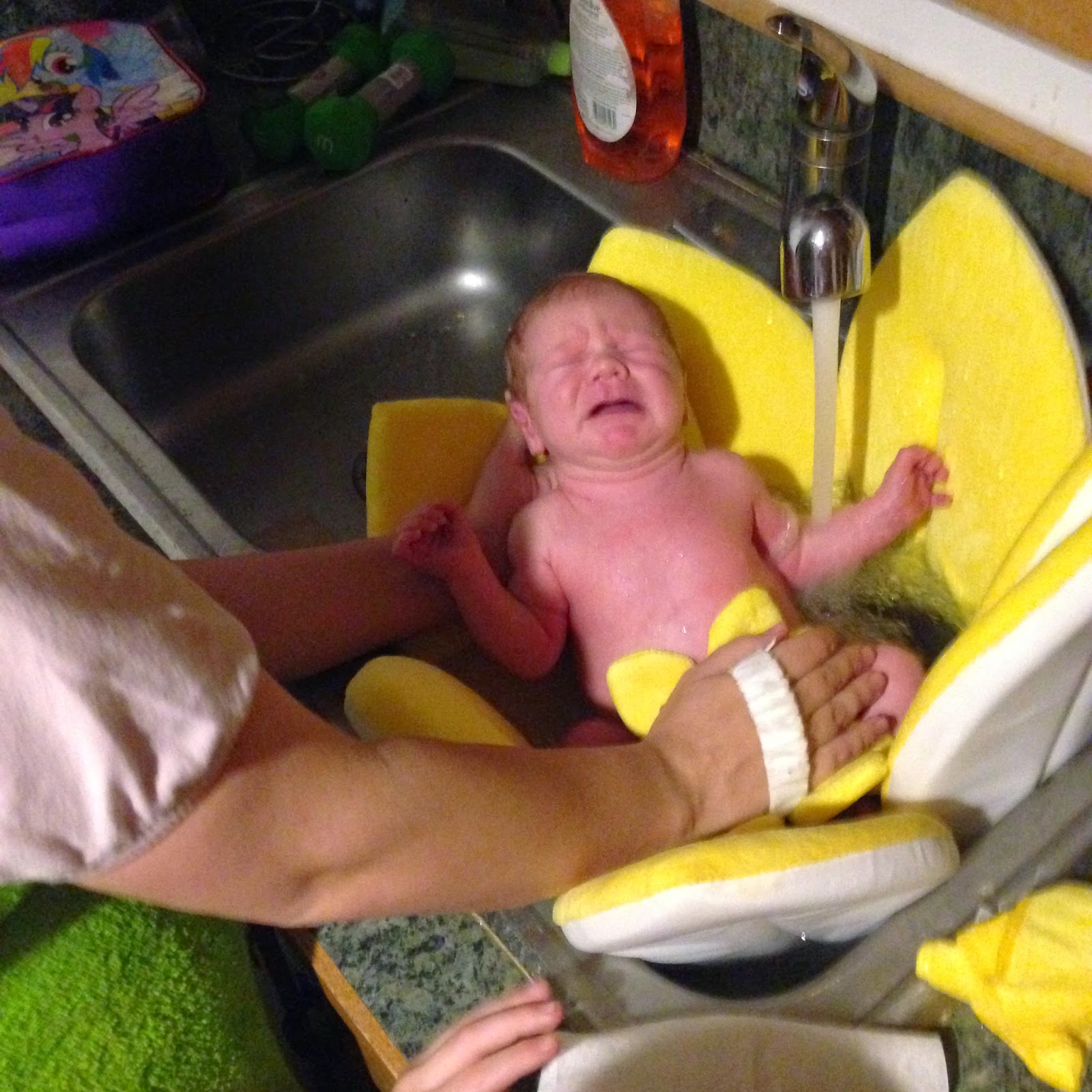 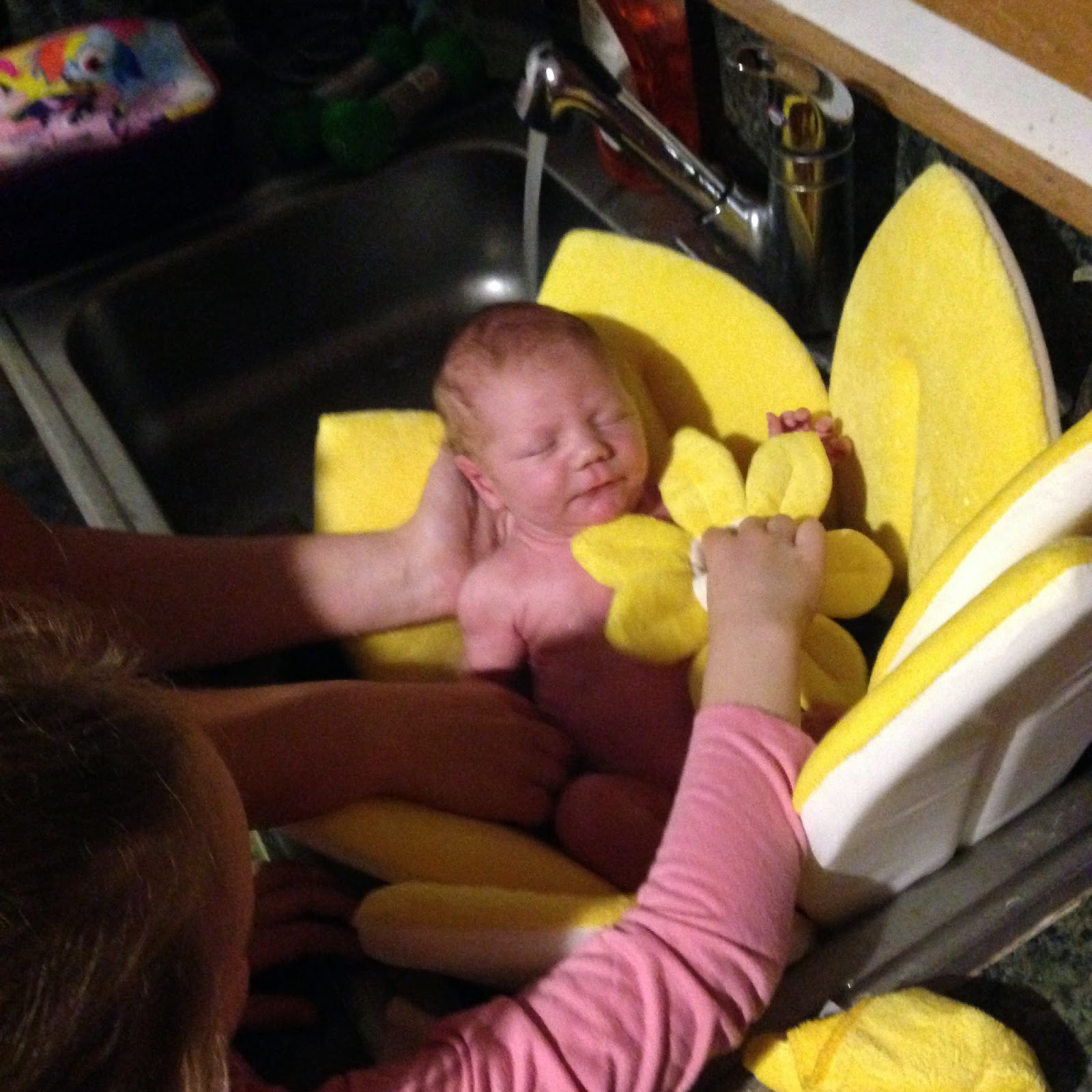 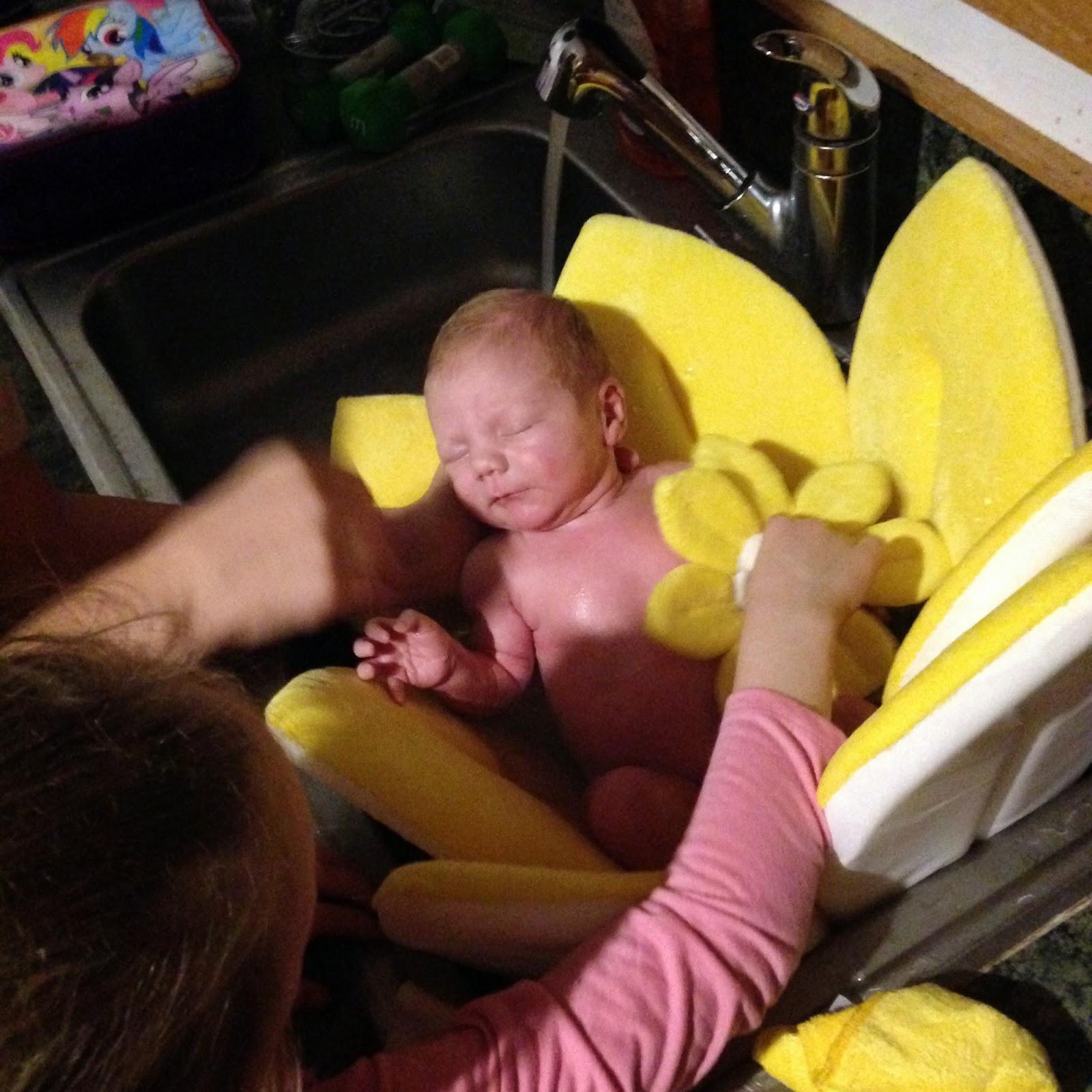 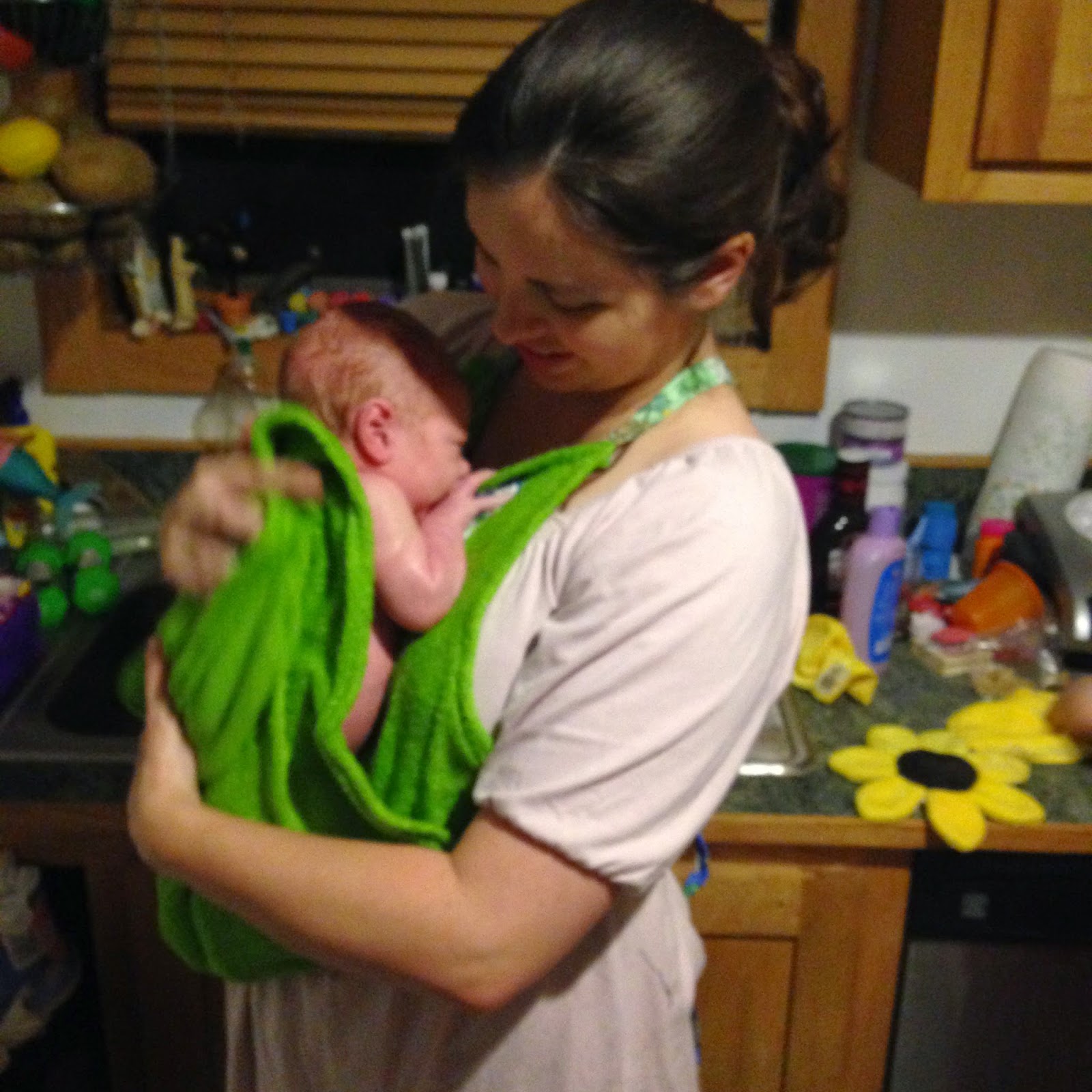 And after looking at the flower this morning I found that the #1 complaint I saw in reviews of the flower (that it took "forever" to dry) didn't hold true for us.  I went to bed last night after sewing and I was so tired that I didn't even ring the flower out all that well.  I left it on top of the sink to dry.  I expected it to be heavy and wet when I came downstairs this morning and it was just barely damp.  It will definitely finish drying before we next use it, so I'm definitely a fan!

James had a trip to the doctor's office today.  He seems to be starting down the road of allergies with some little reactions after nursing, and he has reflux and a tendency to turn purple as a result, which the doctor assured me isn't all that bad since when it happens he is trying to breath (he said he'd be worried if he was turning purple when he was still and not moving at all).

The appointment also meant a weigh in for our little 18 day old guy and he had gained another 15 ounces in the last eight days, weighing in at 9 lbs 9 ounces.

He wasn't willing to crack a smile while we waited for the doctor, despite my best efforts, insisting instead on his typical grumpy baby expression: 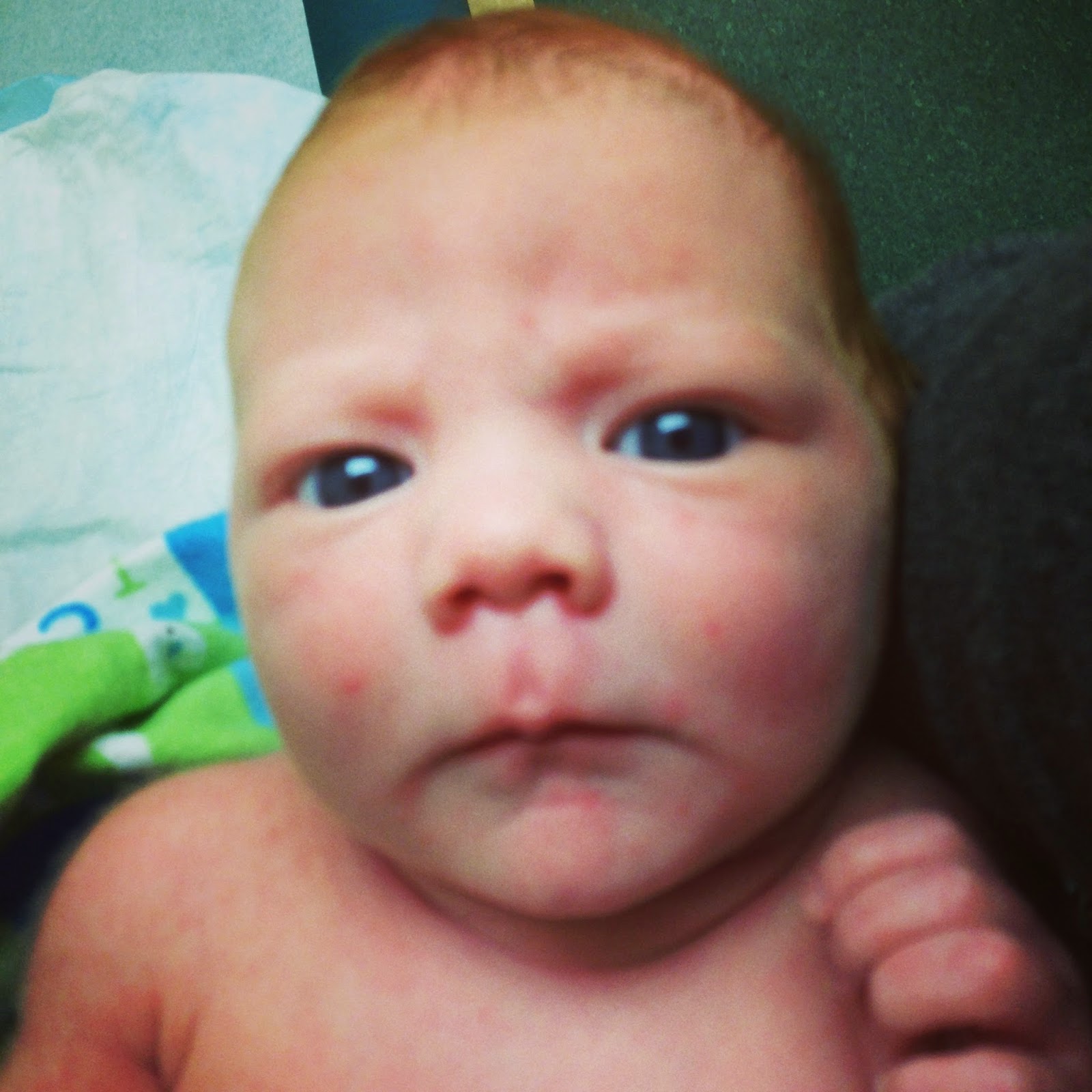 The receptionist also said "it looks like you have a redhead!" so that's another vote on what color it looks like in real life.


Sadie spent most of the day wearing this... she insisted that it was absolutely necessary because "the house is freezing."  It isn't.  But it was a good excuse to wear this (according to her at least): 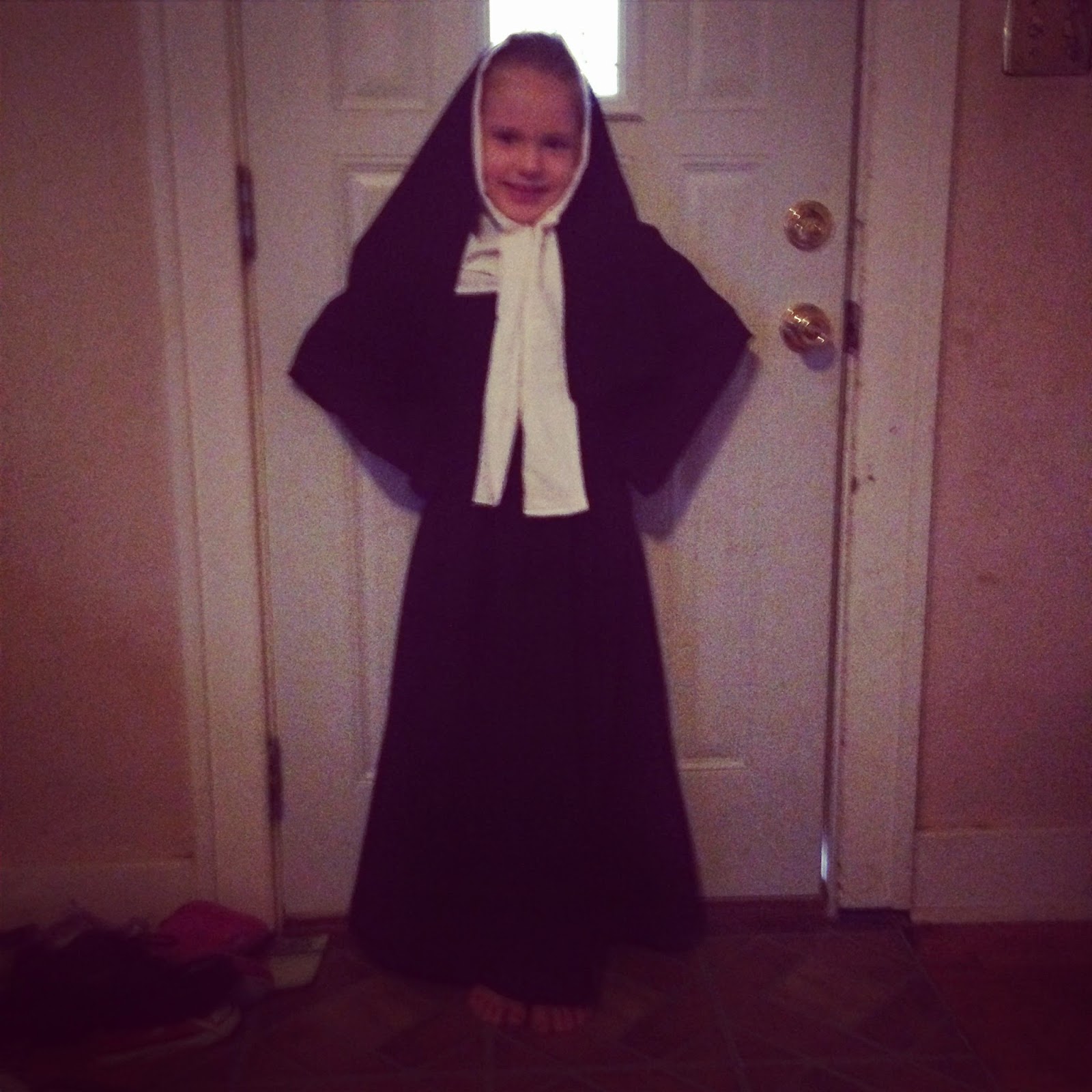 She also insisted on shooting a video after the little photo shoot:

It snowed today.  It didn't stick, but it snowed.

I'm not sure if you can see it here, but those little white specks were actually rather chunky snow flakes. I'm in denial.  I love having seasons but after last winter, which feels like it ended about five minutes ago, I'm not quite ready for fall to come to an end.  I love the chill in the air right now... but I'm not ready for it to be so cold that it hurts to breath!  Like this:

I'm not ready for that just yet.

My little mermaid made this during therapy.  The mermaid on the right is Sadie.  The one in the middle is Mae.  She kept pointing to the middle mermaid and saying "Me!  Me!"

And if her grin was any indication, she was really, really proud of the finished product! 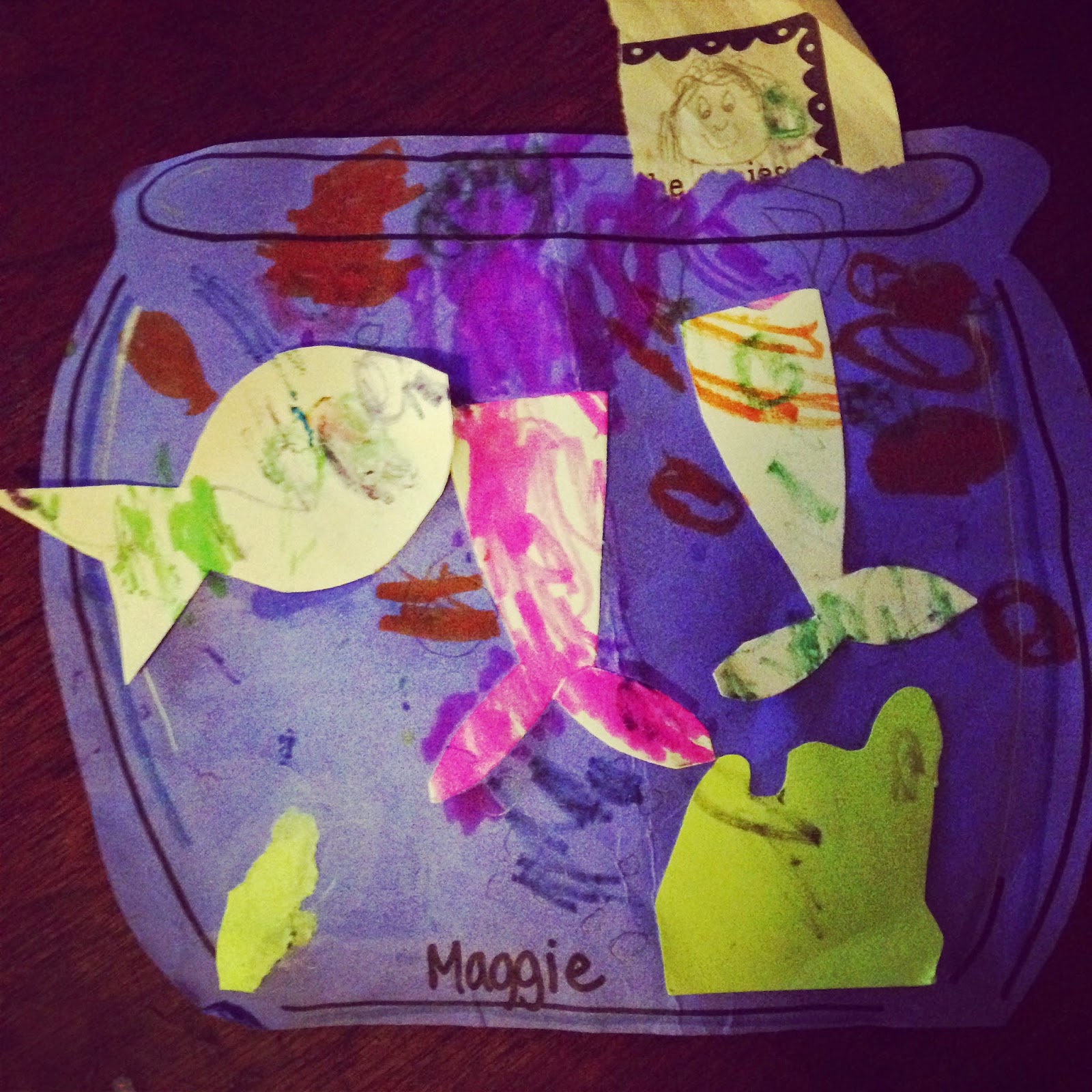 And lastly, for two of my favorite photos from this week.  One is of my little ballerinas and one is Paul cuddling James before heading out the door for work: 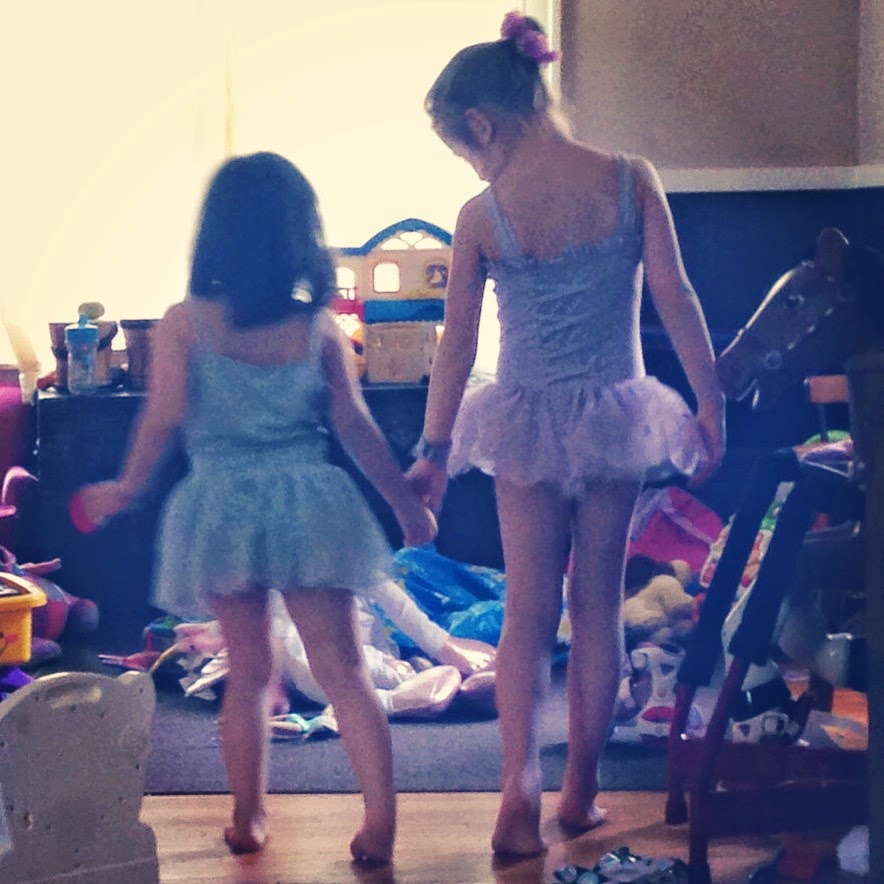