Sunday at Home: The Baptismal Gown, A Hopping Mermaid and Roller Skates

Another Sunday without Mass for the majority of the members of our family.  Last week it was the whole bed rest thing, which I guess technically I'm still kind of supposed to be on, although the painful contractions seem to have eased up, so that being up and about for short amounts of time doesn't seem to be a problem and sitting up seems to be okay again.

This week it's the virus that just won't leave our house and I don't want to expose our entire parish to whatever-this-is because while I'm feeling 100 times better than I was before starting the antibiotic and while the sinus infections seems to be gone, whatever the underlying virus is still seems to be hanging around, and Sadie and I probably look like walking enterovirus 68 germs to anyone who sees us (I have no idea if that's what we have... it just seems to be some sort of persistent breathing type virus that she and I aren't kicking as easily as everyone else in the house did).

So home it is.

I did finally defeat the laundry pile in the basement last night that had been threatening to overrun the laundry area (while mostly sitting down!  Yay!) and I hand sewed five of the six button holes on the back of the baby's baptismal gown, because my button sewing foot for my sewing machine just will not attach and after spending several hours trying to get it to work I realized that in that time I could have just sewn them by hand.

Actually that's not totally true.  It took about three practice button holes to master the button hole stitch (if you're interested this is the tutorial I used to learn the stitch and while I thought, "oh I hand sew all the time, it won't take three practice holes to master the stitch" the tutorial was exactly right and that's how many it took before my button holes actually looked like button holes and not like horrible knots of thread attacking the fabric and eating a hole in it). And those three button holes took a couple of hours and then the five good button holes took another three hours, which brought me up to midnight last night when I decided that I should probably go to sleep before Patch woke up claiming that it was morning.

Talking about button holes and laundry... I may have officially steered my way into writing the most boring post ever. I guess that's not surprising since we're kind of stuck in a semi-bed-rest, trying to get stuff done and waiting-waiting-waiting for the baby mode.

In other random news, we finished Sadie's 90th day of school (the midway point for the school year).  We started early since she bugs me to start the next school year the moment the last one is finished, and because Mae has school every day and if Mae is "doing school" she wants to be doing school too. So I mapped out a schedule with an ample break for mid-October, and we had school days through much of the summer, planning plenty of spaced out short breaks that would take us back around to April when we finished last year and after a couple weeks break re-started her studies.  However, it makes me feel good to have half of the year finished before the baby arrives, because now it definitely feels like we've earned this break.

And since we've pretty much established that this post is little bits and pieces of randomness, like most of the other posts lately, here is a post that shows how Mae gets around in her mermaid outfit.  The child certainly has very good large motor skills and she hops (really high) through the air like this: 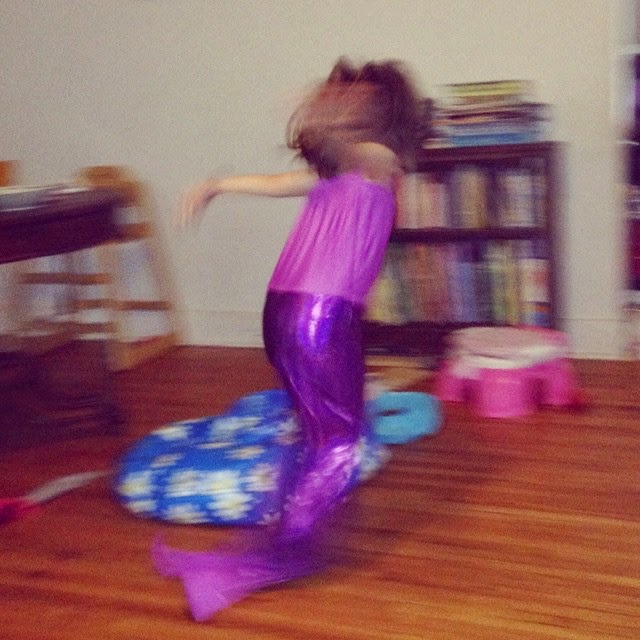 It's kind of amazing to watch.  She rarely falls and she moves fast.

These days when she's not a mermaid she's often roller skating through the house at a rapid pace and has become quite good on her skates.  Her latest goal, which I'm not a huge fan off, is to teach herself how to jump in them.

Now to go rescue Patch from his two sisters and their mermaid/princess adventures!  I hope you had a happy Sunday!
Posted by Cammie Diane at 1:49 PM