Bits and Pieces from our Week: Butterflies, Ballet, Computers Crashing and a Very Special Feast Day

Thank goodness for warranties.  Last year my computer of many years almost completely stopped working and we bought a little Google Chromebook.  When it was only a month or two old I fell down a small staircase in the house carrying it... and while I was fine... it was not.  The computer center at Paul's school was unable to resuscitate it and so finally I found a refurbished computer from Best Buy and ordered it.

It's was a great computer for about ten months and then it started to have little blips here and there where it would freeze or crash or programs like photo and the camera wouldn't run.  I was hesitant to send it back, because being without my computer for the estimated two weeks was not going to be easy with my business, but it became clearer and clearer that that was what needed to be done (and I found myself more and more thankful that I'd purchased the extended warranty as I received the results from it's checkup once it reached HP).

They told us over the phone that they believed the hard drive was failing.  When it arrived replaced the keyboard and the touchscreen and some cables and something listed "miscellaneous parts" and I believe, the hard drive itself since the computer they returned is basically a brand new computer.  I guess more than just one or two things were going!

And now that it's back I can finally share some of the pictures I've been snapping, in yet another totally random blog post.

I think as we lead up to the last days of this pregnancy random posts may be the rule of the day since my mind is here and there and everywhere with everything that I feel like I should be doing.

I do have an update of things that have been finished (some I may have mentioned before but bear with me since I'm trying to feel like I've gotten soooooooo much done around here).  The car seat is installed.  The hospital bag is (mostly) packed.  The bassinet in our room is up and has clean (if rather girly) sheets on it.

The bookshelves and books have been moved out of the boys' room, the furniture is rearranged, the room itself was deep cleaned and all the baby clothes are clean and put away (major victory!).  My work area has mostly been reorganized to fit the bassinet in between the bed and my sewing machine/fabric area so that baby has a place to sleep while I sew (and hopefully that works out just as well as it did with Patch... sewing machines can be quite lulling for tiny swaddled babies).

Now, on to other random things...

Sadie, spent the last couple of months describing the perfect Halloween costume at length to Nani. She needed to be a blue butterfly and had the costume all picked out.  Last night a box arrived and she squealed and danced around and helped me clean up the house after her brother and sister went to bed and then we opened the box and discovered... 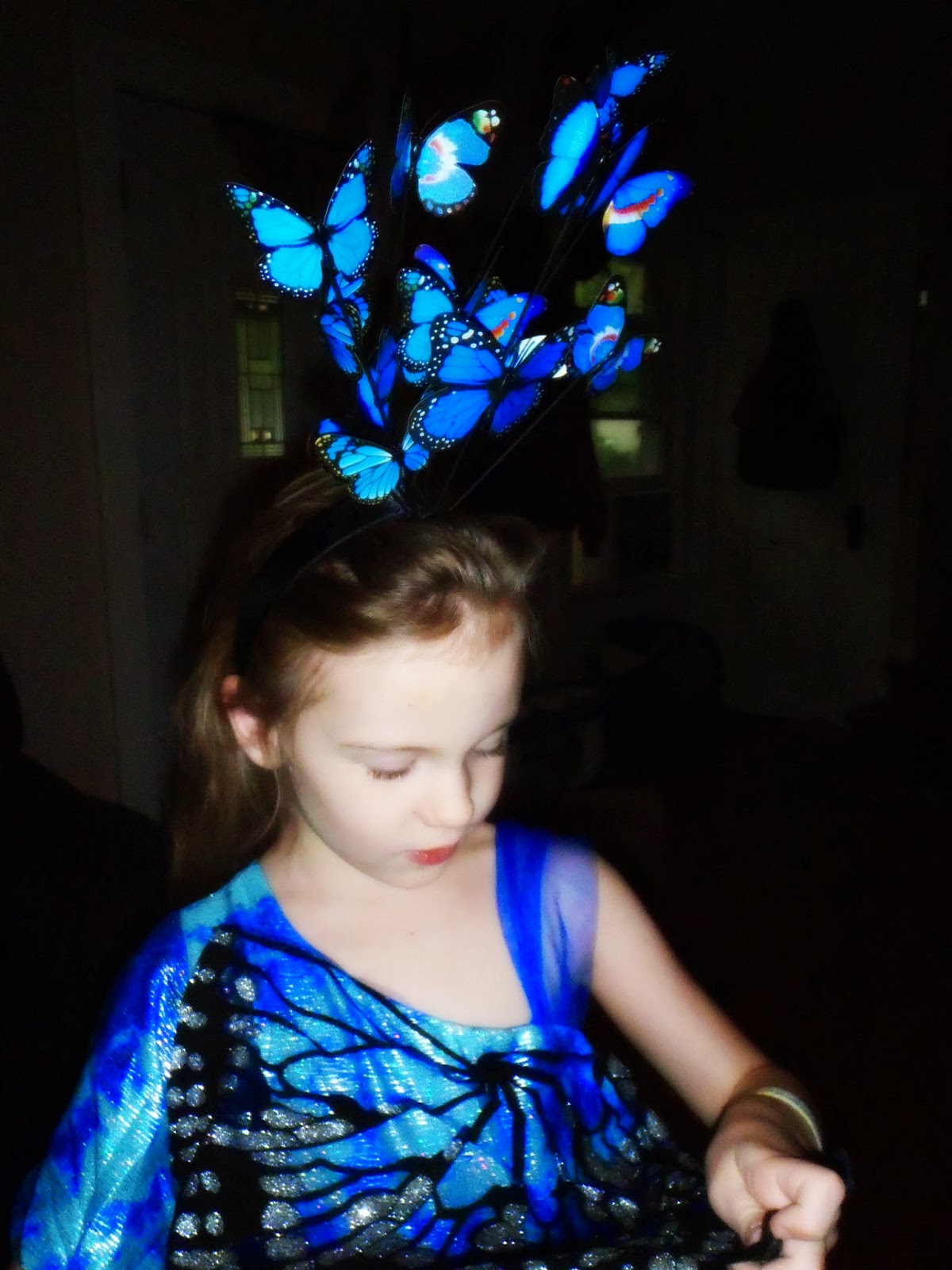 After posing for a few pictures she almost immediately asked if I could get down her knitting from the mantle so that she could begin her nightly knitting time... in full costume... 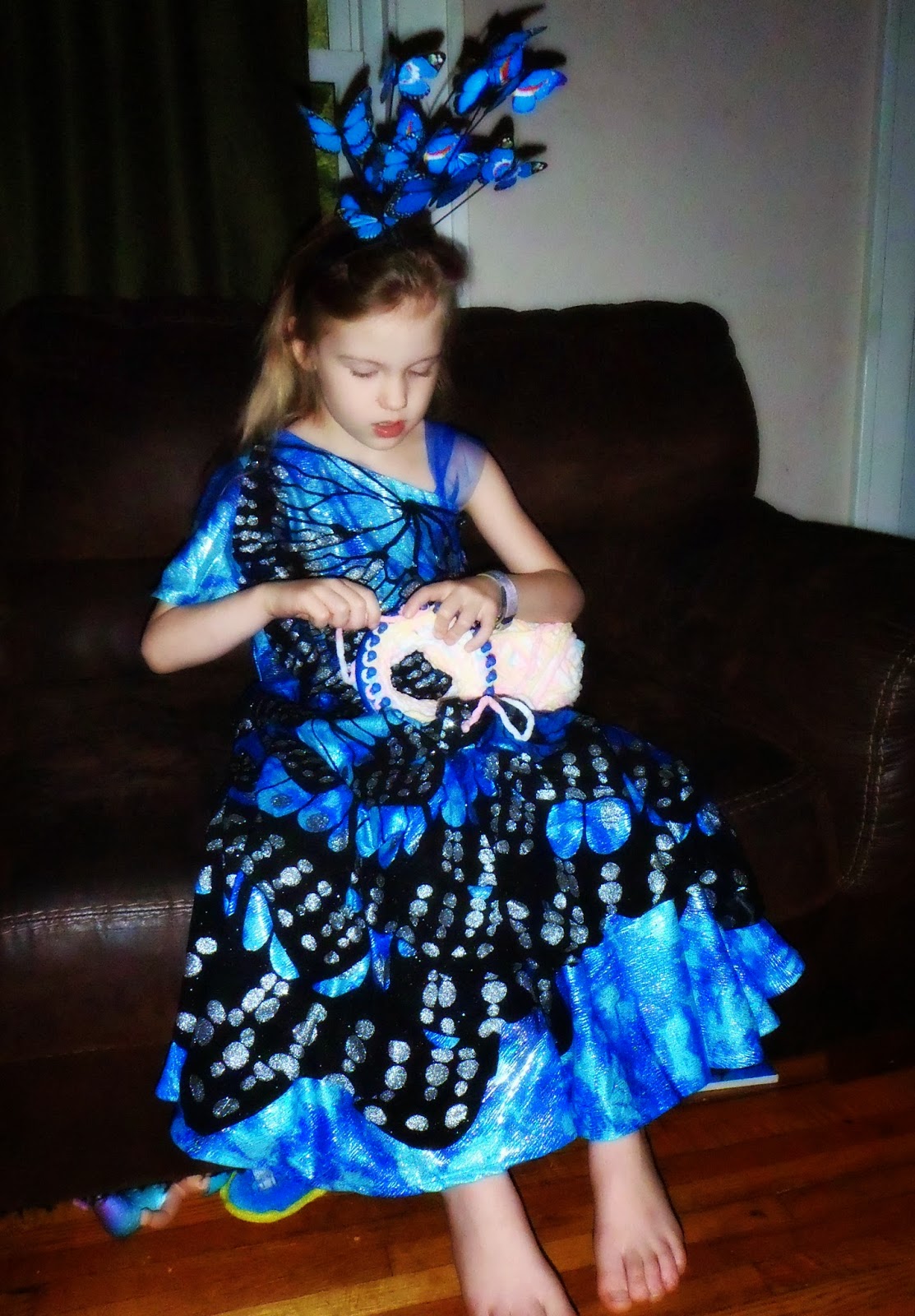 She's now on her fifth hat and is steadily working away. When I asked her if she wanted to make a hat for herself she told me, rather sternly, that there were babies without hats who are cold and that she has hats... so that would be a no.

She's also in love with her new ballet school.  After two years of taking the little kid classes, and insisting that she still loved ballet, I thought she was big enough to move up to the "big kids" school and it's been a perfect fit so far.

And she's managing to fit in quite a few extra activities through the rec district, including Wednesday night karate (which comes to about a dollar a class) and her AHG meetings on the weekends!  We're finally finding the balance between therapy in the mornings and big girl activities for her in the evenings!

In other picture news Patch, while older, continues to be the little brother... and that means that his life involves a fair amount of pink.  He's eagerly awaiting the arrival of another little brother to perhaps spread out a little bit of their sisterly dress up enthusiasm.  He did charge around the house in this costume yelling "giddy-up!  Giddy-up!":

In other little bits of randomness... Once a week Paul's work has a special where 10 inch pizzas are $2.  That combined with the fact that they have gluten free pizzas (and his discount) mean that once a week before Sadie's ballet class we load up the kids in the mid afternoon and go out to pizza.  It's kind of become a big deal with them (and with us since right now not cooking sounds really, really nice).

This time before leaving to go to Sadie's class, I ran to the restroom before it was time for us to leave, leaving behind these three with Daddy: 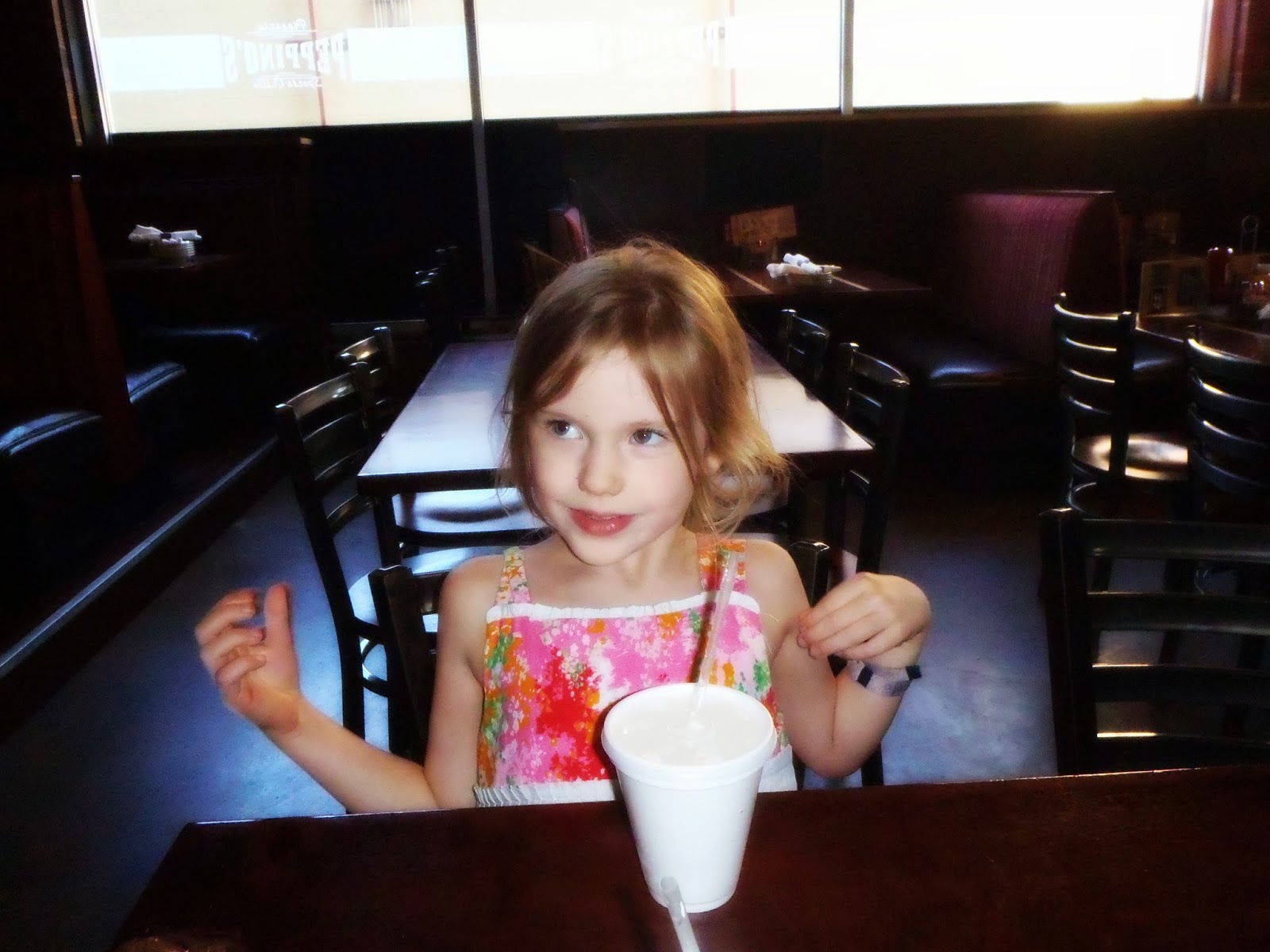 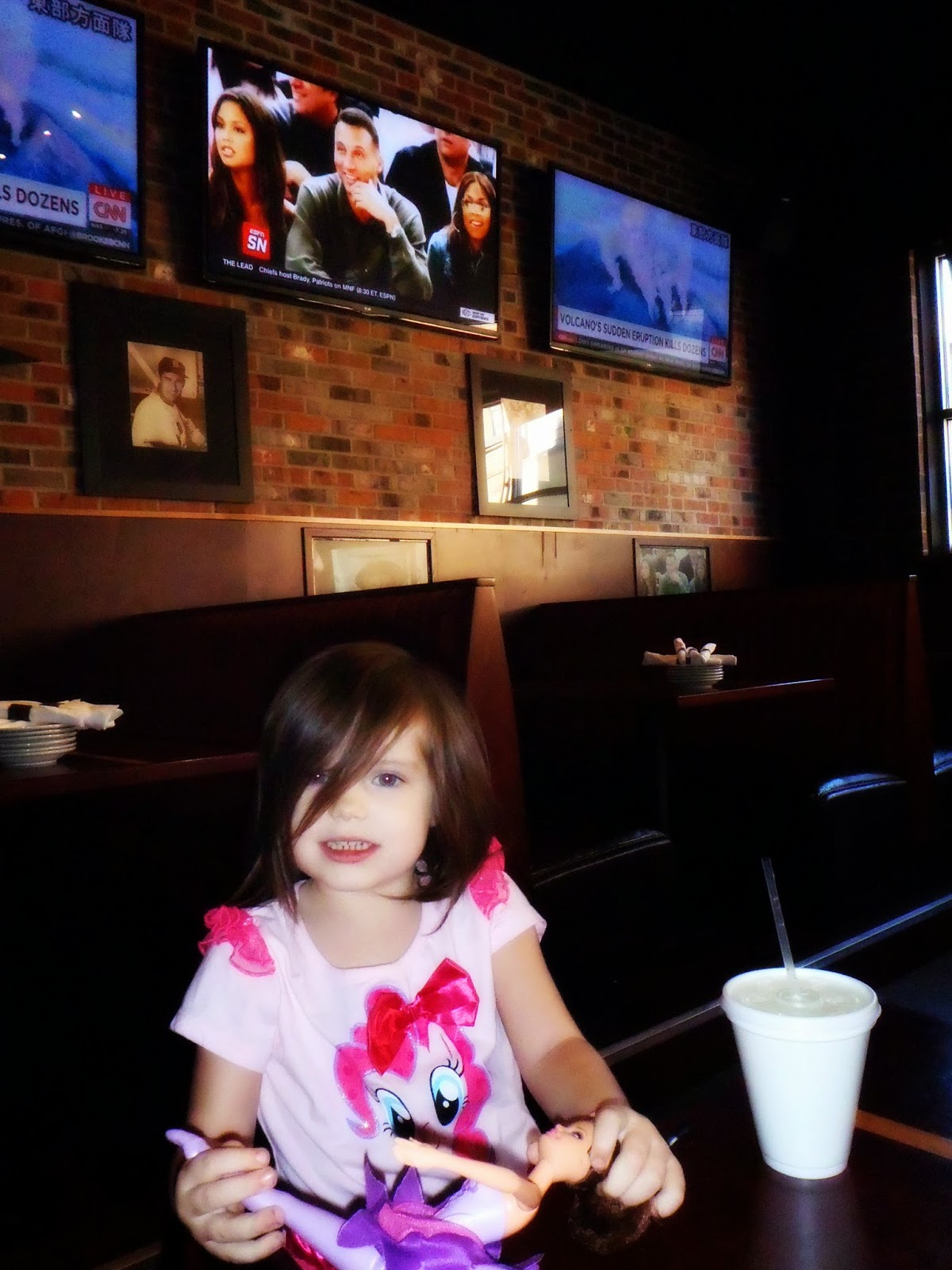 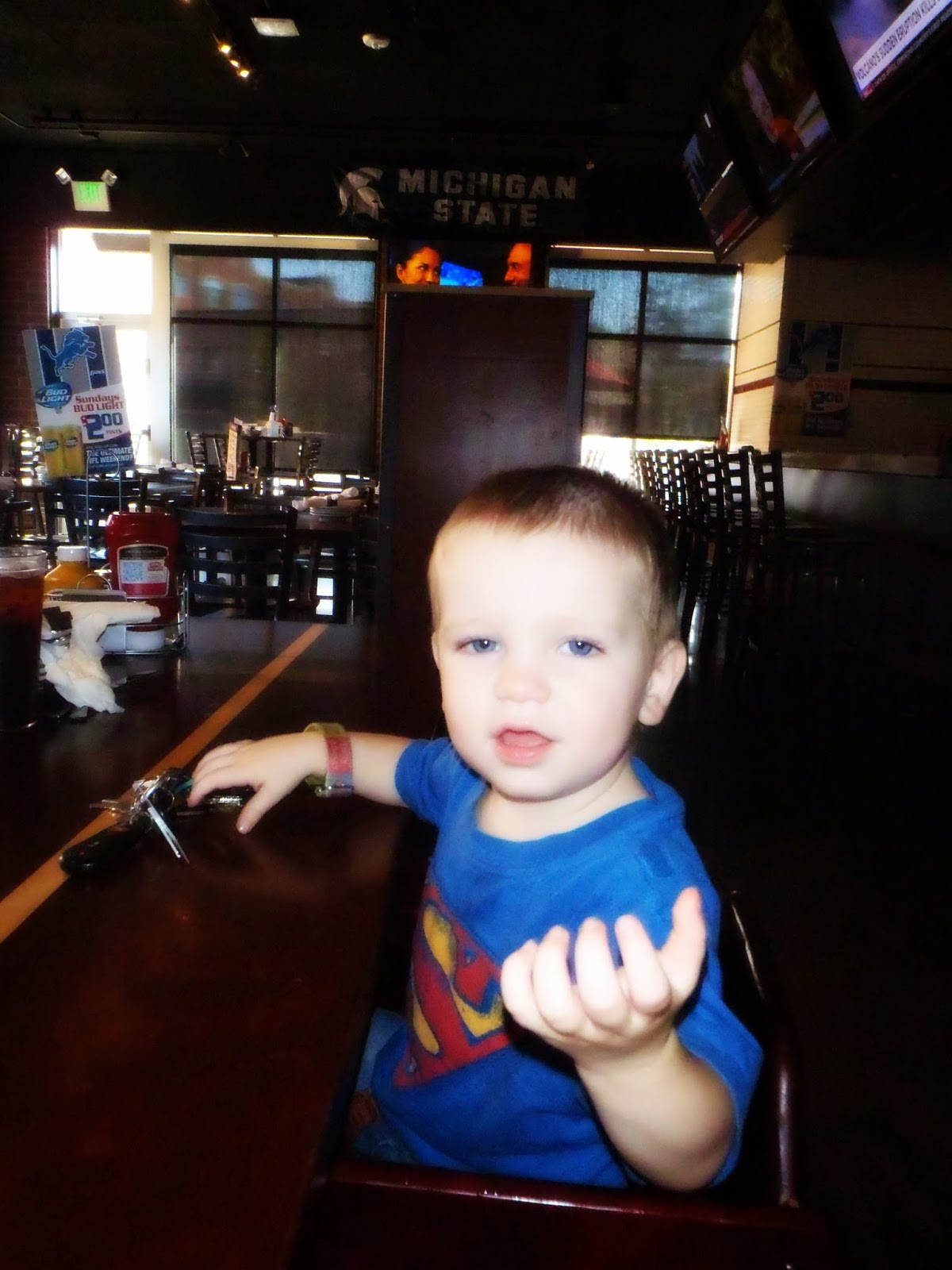 I returned to the table to find out that Mae had been very talkative while I was gone and had let everyone at the table know, the entire time, that I was "bad Ma" for leaving the table and that she was very unhappy with me.  And even with my less than flattering title I was still pretty thrilled because she was so clearly expressing herself!

And finally, today is Sadie's favorite feast day of the year.  The feast of Saint Therese of Lisieux.  And so I had to share a picture that I snapped in her Godmother's parish a couple of years ago, along with two quotes that I put together for today. 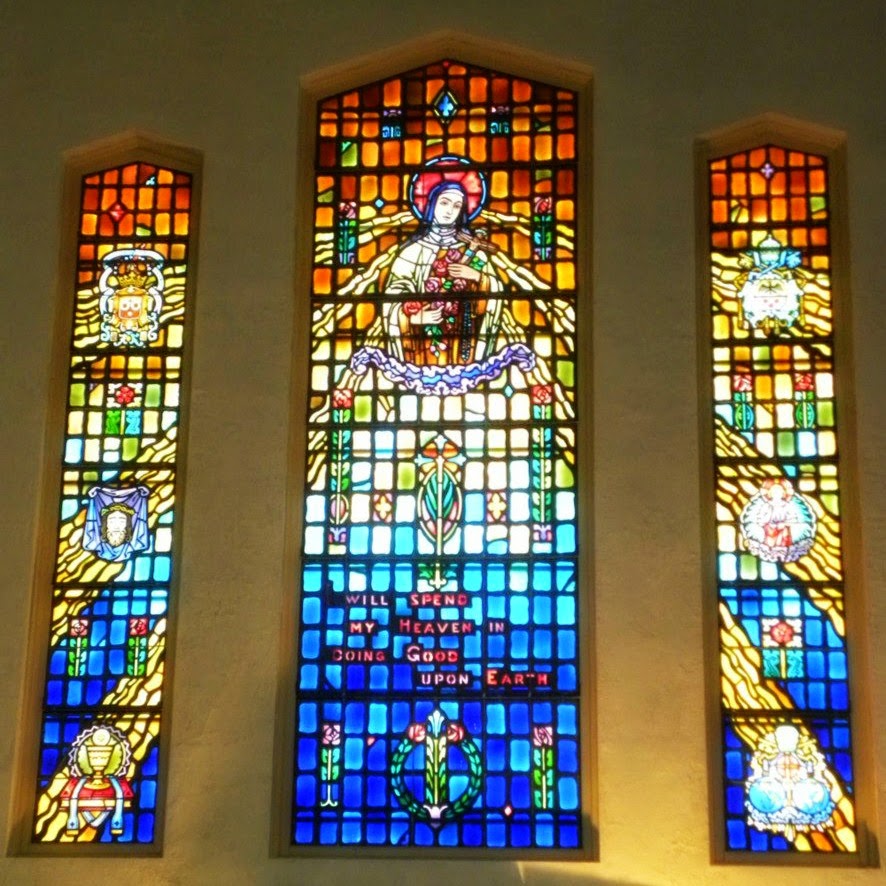 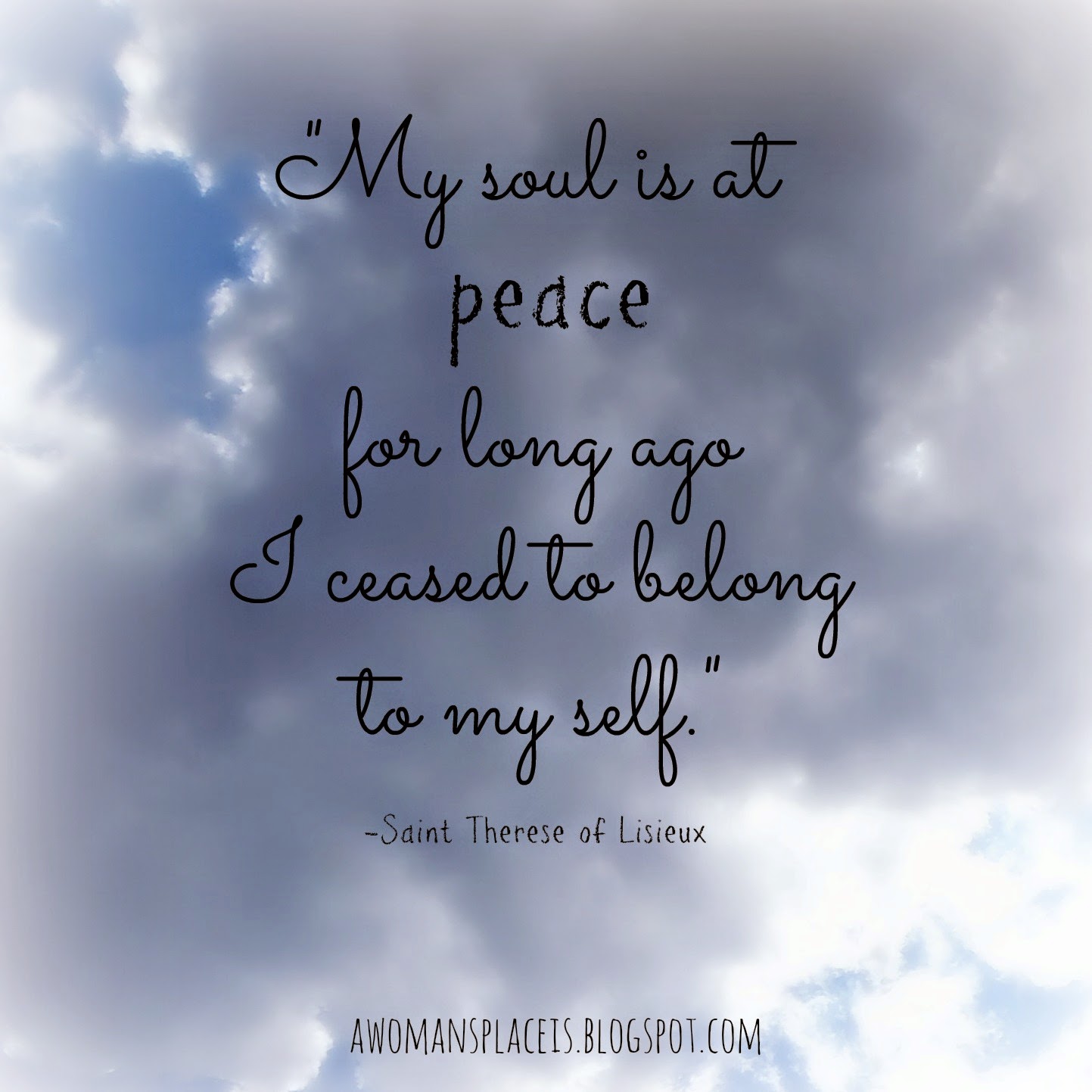 I hope you have a wonderful feast day!
Posted by Cammie Diane at 8:41 AM