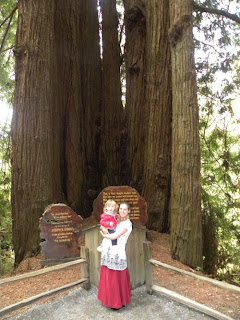 Yesterday was pretty wonderful!
Anyone who's never tried to make it through Mass with a hyper toddler may not understand my excitement, but I was thrilled with Sadie's "mother's day" gift.
Up until now we've had ups and downs with Sadie's Mass behavior. The first few months were easy. I made sure she was fed and changed right before we went in and while there were still disasters (how many diapers can a baby go through in an hour?!?!?!) we did all right. Then she started walking and we went through another difficult phase, when Mommy or Daddy saying she had to stay up on their laps could result in a full scale tantrum. Moving our seats up to the very front row of the Church seemed to solve that problem (Sadie was so fascinated with what was going on that she was pretty much silent for the first couple of months) but lately she's been testing her limits again and I've been a little nervous each Sunday before we leave for Mass. 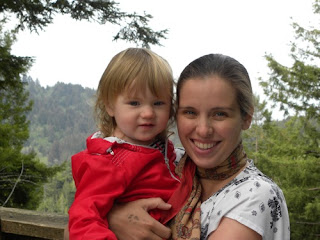 I was especially nervous yesterday. Truthfully I was so nervous that I was thinking about it Saturday night as well. You see, we were attending the closest Tridentine Mass to our home... which we only rarely have the opportunity to do, since it's over three hours away in a different diocese.
The first (and only other) time that we were able to attend a Latin Mass was something of a disaster. Sadie and I ended up alternating between standing in the back and going outside while she went through tantrum after tantrum. It was one of the longest hours of my life and I'll admit that I burst into tears when we got into the car (Sadie was going through one of her biting-phases at that point and it was very, very, very frustrating).
That memory, added to the last three somewhat difficult weeks she's been having with sitting quietly (despite our seats in the front), added to my nervousness. I talked to Sadie quite a bit about what a big girl she would be when we went to see Jesus at Mass.
We walked through the doors at Mass at Saint Joseph's and Paul took us to our seats and then went back outside to find a restroom, leaving Sadie and I alone. She started to squirm and whine. I hushed her, but finally let her off my lap, at which point she did the first thing that surprised me. For the first time in her life she knelt down on the little kneeler like she sees Mommy and Daddy do and held perfectly still. Daddy returned and Mass started.
Sadie allowed herself to be scooped up into my arms and hugged me. She then spent the rest of Mass on my lap, sitting perfectly still with her head against my chest.
When Mass ended she went back to her normal bouncing-off-the-walls self and we ended up letting her run around at a local redwood tourist site for about an hour before putting her back in the car.
I do wonder if our daily nap time prayers have anything to do with her model behavior. Every day before nap time Sadie and I say a rosary together in Latin. The one we say as a family before bedtime is in English, but we really wanted our kids to be familiar with both so the nap time one is in Latin. I do wonder if Sadie now equates hearing Latin with settling down on Mommy's lap and closing her eyes. Either way, I was thrilled. Having my little cuddly bunny sitting quietly on my lap made the Tridentine Mass an even more awesome experience!
Posted by Cammie Diane at 10:26 AM