Maggie is eight weeks old today and rapidly outgrowing the clothing that I have out for her. I'm going to have to do some switching around pretty soon. Today I was downstairs with the girls and needed a cooler outfit for Maggie. I only had a couple of twelve month sleepers that I'd washed and needed to put away and I grabbed one and tried it on her. It was a little long in the legs (by about an inch) but other than that it was actually pretty fitted. Here she is in a 6 month sleeper: 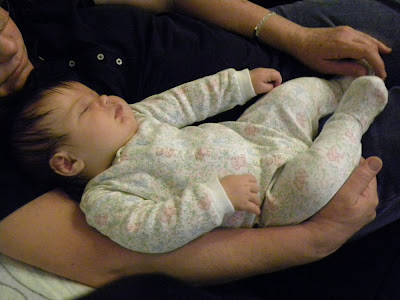 I don't know why I purchased a single newborn outfit this time (I think it was just one exceptionally cute sleeper that I bought at Target the week before Maggie was born "just in case" she was littler than Sadie). And while she was "smaller" than Sadie by a little over two ounces and 1 inch, she's quickly grown and is now bigger than Sadie was when she was much older (and Sadie, who is now a size 4T at 2 was never dainty for her age!). Maggie is such a big girl!
Posted by Cammie Diane at 12:27 AM

Email ThisBlogThis!Share to TwitterShare to FacebookShare to Pinterest
Labels: Week by Week...