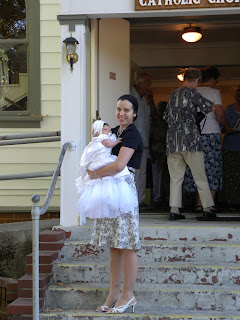 Maggie will be seven weeks old tomorrow and I've been avoiding my "weekly weight loss" posts since week 2. That's because those first two weeks were so easy. Just like last time the first twenty pounds just disappeared. And then they stop disappearing: halfway to my goal.
I have thought: If only I were one of those women that gained the recommended twenty to twenty-five pounds, I'd already be back to my pre-pregnancy weight.
But that just doesn't sound all that realistic to me either (and I don't think that's realistic when there's almost 10 lbs of baby in the picture). It just doesn't seem like we're supposed to be back to our pre-pregnancy weight two-weeks after giving birth. That seems just a little too quick!
I was trying to take it easy until I got the okay from my OB (which I have now). And I'm definitely not going to be "dieting." I'm just trying to eat as healthily as is possible and am walking as much as I can (the triple digit heat we've had here has made that difficult). Hauling around a fourteen pound seven week old and an almost forty pound two year old won't hurt either. I think my arms are stronger than when I was playing rugby and surfing or spending five days a week at a karate dojo. 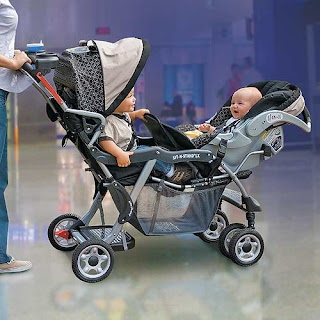 Actually walking and hauling the girls around is a little easier this week. Nani and Grumpa gave us this stroller day before yesterday, and yesterday we took it out for a spin in town.
I hadn't wanted a stroller where the girls were sitting side by side (because right now that has them a little too close for comfort, since Sadie has "helpful" down but not "gentle") and I really liked the idea of having a little shield between Sadie's and Maggie's feet. And they've been cuter than I imagined was possible. Sadie sits forward as far as the harness allows and holds Maggie's hand. Yesterday they both fell asleep on the way home from our evening family walk.
But it is heavy (especially with all that baby in it!). I'm hoping it's going to be a big part of my workout/weight loss plan.
And now for the seven week update: 27 lbs down... 18 lbs to go. It would be nice to reach my goal by Christmas!
That would be around 4 lbs a month... I think that should be doable... especially now that we're getting to the time of year when it's not actually too hot to go outside!
Posted by Cammie Diane at 11:12 PM